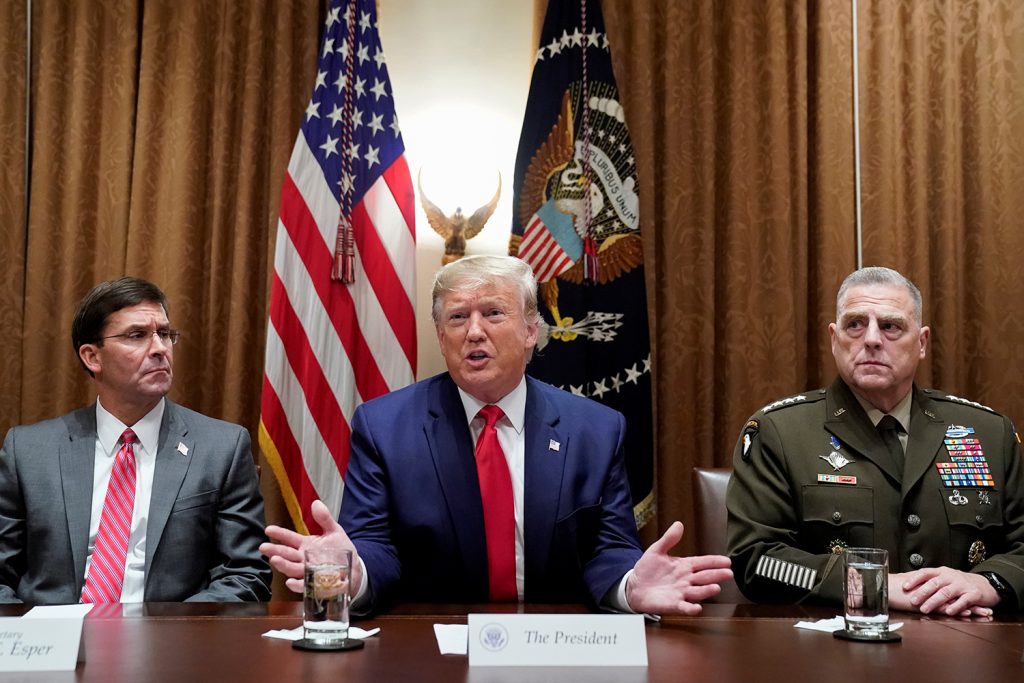 A week of dramatic changes in northern Syria has left the United States in a precarious position, feuding with its NATO ally Turkey, while also fearing the resurgence of the Islamic State of Iraq and al-Sham (ISIS) and the entrance of Syrian government and Russian forces in the region. Turkey’s military operation over the Syrian-Turkish border, touched off by a limited US troop withdrawal and motivated by Ankara’s claims—supported by US officials—that the Kurdish People’s Protection Units (YPG) militia was supporting the terrorist Kurdistan Workers’ Party (PKK), has pushed the Kurdish, Arab, and Assyrian Syrian Democratic Forces (SDF) military group to cooperate with the regime of Bashar al-Assad and his ally Russia in an attempt to halt the Turkish advance.

The deteriorating situation prompted US President Donald J. Trump to announce on October 14 that the United States would be imposing sanctions “against current and former officials of the Government of Turkey” as well as restoring tariffs on Turkish steel to 50 percent and halting negotiations over a $100 billion trade deal between both countries.

Trump argued that “Turkey’s military offensive is endangering civilians and threatening peace, security, and stability in the region.” Ankara, meanwhile, argues that its action is necessary to remove the threat of terrorism from its borders and to create a “safe zone” where about 2 million of the more than 3.6 million refugees living in Syria can return to.

Despite the precarious situation, Trump also doubled down that he is “withdrawing the remaining United States service members from northeast Syria.” US Secretary of Defense Mark Esper said on October 13 that this withdrawal would occur within “days or weeks,” rather than immediately. The majority of the 1,000 US troops in Syria are in northern Syria.

Atlantic Council experts respond to the latest developments in Syria, the meaning for the US-Turkish alliance, and the potential path forward for the United States.

William Wechsler, director of the Atlantic Council’s Middle East programs and the Rafik Hariri Center for the Middle East:

“It’s hard to believe, but just last year the Trump administration, after a lengthy internal policy review, formally announced that the United States would maintain a military presence in Syria indefinitely. Back then it offered five reasons for this policy: to deny terrorists like ISIS the use of ungoverned spaces, to thwart al-Qaeda, to stop Assad from restoring his control over the entire country, to prevent Iran from further strengthening its position, and to help a people which has suffered greatly. It also presented five desired end states: that ISIS and al-Qaeda in Syria suffer an enduring defeat, that the civil war is resolved through a UN-led political process that removes Assad, that Iranian influence is diminished, that refugees can safely return, and that Syria becomes free of weapons of mass destruction.

“All of these reasons remain valid, but every single one of these end states has now been undercut by President Trump’s decision to abandon the Syrian Democratic Forces. It is rare to see an American administration completely fail to meet any of its own self-imposed goals in so short of a time period.”

“It is sad to see that two strong strategic NATO allies going through this stage. We should remember that US security interests in the region cannot be met without Turkey and vice-versa. In the end no side will benefit from this, [except for] Russia. Turkey’s gas contracts with Russia will be renewed in 2021, and Turkey has the capacity to increase the liquefied natural gas (LNG) share in its gas imports to 60 percent. Now, these sanctions will hit US interests in the Turkish market significantly.”

“Instead of cutting and running—or posturing and beating our breasts—our conversation about Syria, Kurds, Turkey, ISIS, and the way forward should focus on sound strategy to meld achievable goals with the means to affect them.

“That means finding new ways to keep ISIS defeated, using our leverage to get Turks and Syrian Kurds—who have no choice but to live together —into a better place, and re-engaging with all of Syria toward more effective governance, security, and social-economic order.”

Matthew Bryza, nonresident senior fellow with the Atlantic Council’s Eurasia Center and Global Energy Center. He is a former US ambassador to Azerbaijan and former deputy assistant secretary of European and Eurasian affairs

“President Trump’s decision to base the latest round of US sanctions against Ankara on the demand that Turkey declare ceasefire rather than withdraw its troops from Syria is significant. It provides Turkish President Recep Tayyip Erdoğan a dignified exit ramp, allowing Turkey to establish a safe zone in northeast Syria at the depth and with the level of Turkish control that Ankara had been demanding. So, by declaring a ceasefire now with these goals met, Erdoğan can also declare victory.”

“The United States should make two things clear now. One, that the ceasefire Trump asks for does not apply to battle or air space beyond the line of conflict on the border. Turkey has operational freedom in the eyes of the United States for the purpose of fighting ISIS, and this purpose only.

“Two, that the United States will act as guarantor for the agreement reached between Damascus and the Kurds. The United States could agree to a small concession in order to sweeten the deal on the side of the Kurds, like green lighting Jordan to transfer electricity through Syria to Iraq.”

“US and Turkish security objectives in the region have been misaligned for years, leaving the bilateral relationship in a tenuous place with decreasing incentives for cooperation. Trump’s concession to Erdoğan on the SDF and Erdoğan’s subsequent actions have made matters still worse, causing chaos on the ground and outrage among the military and policy communities in the United States (and elsewhere) as the disturbing and obvious implications of the US withdrawal play out. While NATO offers an important venue for routine dialogue that can keep lines of communication open, the Turks have few friends in Brussels ether. Allies are openly questioning whether Ankara’s expanding relationship with Moscow—particularly around the decision to purchase the S-400 [air defense system]—is undermining the security of other member states, complicating constructive dialogue with Turkey inside NATO.”

“Relative to the [Pastor Andrew] Brunson case, the sanctions are willing to take on the Turkish military more directly by designating the Energy and Defense ministries. Not only is an end to the Syria operation more politically costly to Erdoğan than the Brunson release was, but the country is also on a more stable macroeconomic footing compared to last year, which may encourage Ankara to hold out longer.

“As such, coupled with the recent European restrictions on arms sales, these sanctions could raise questions in Ankara and Washington about the future of military cooperation with Turkey, and how the United States and Europe will approach Turkey’s place in the NATO alliance as a whole. Whether or not the sanctions bring Turkey’s operation to an end, it is difficult to envision the balance of power in Syria moving back to its position prior to the US withdrawal announcement.”

“The United States has consistently failed to understand the depth of Turkey’s hostility to the Kurdish-led experiment in northern Syria. Over the years, Turkey has explicitly voiced worries about the entity of Rojava as it was being constituted, but that failed to prompt the United States and its Western partners to come up with creative solutions. One interesting question to ponder: had Rojava been a multiparty entity that included such once crucial players in Syrian Kurdish political space as the Kurdistan Democratic Party of Syria or elements from the Turkey-backed Syrian opposition in leadership roles would Turkey been so hostile to it? This is something US diplomats and military officials could have pushed for much harder. Turkey already has learned to embrace the Kurdistan Regional Government in Iraq. Perhaps it could have similarly accepted a Rojava that was not effectively a one-party state run by its arch-nemesis.”

Faysal Itani, nonresident senior fellow for the at the Rafik Hariri Center for the Middle East.

“This operation has generated mixed results for Turkey. On the one hand its decision to rely so heavily on Syrian proxies whose conduct towards local populations has been less than exemplary has produced some terrible optics. It also seems to have slowed down progress. It is understandable from the perspective of avoiding Turkish casualties, but on balance is not helping Turkey especially given global perceptions of the YPG as a plucky underdog and loyal partner of the West.

“On the other hand, despite the negative publicity Turkey has essentially already achieved its core objective: derailing the YPG project in Syria. I imagine it would have preferred to do this by occupying YPG-held territory but the invasion itself prompted the YPG to hand over a great deal of territory to the regime/Russia. This is not ideal for Turkey (which had hoped to create its own buffer zone in northern Syria, but it is an improvement over what it sees as a terrorist statelet incubated and protected by a global superpower. It is of course great news for the regime as well.

“Then there is the matter of US policy. I believe the main loser in all this other than the YPG is the United States. Although the US strategy in Syria was problematic in many ways and perhaps most of all in its implications for Turkish-US relations, there was no clear reason why it needed to unravel overnight and so chaotically. And with that done, it is still unclear to me why the president would then turn around and negate any possible positive effect this had on US-Turkish relations by sanctioning Turkey. By doing so he has remarkably managed to make an enemy out of every single major actor in Syria and undermined US respectability and credibility. I do not believe sanctioning Turkey for doing something we acquiesced to—if not invited—is strategically sound.”

“The United States, in withdrawing from Syria and allowing Turkey to enter the northeast while at the same time sanctioning Turkey, is sending mixed signals and casting doubt on the exact nature of US policy or objectives. Washington should clarify its objectives and redouble its diplomatic efforts to convince President Erdoğan to withdraw from Syria, while also understanding that the Turks have genuine security concerns that the United States should help address. This will likely need to be coordinated with Russia now that the SDF and the Syrian regime have entered into talks which will lead to a regime presence in the northeast. The United States should also continue to press the Europeans to take back their citizens from the [ISIS] prisons and camps in the northeast as their presence in Syria is neither safe nor sustainable.”

Turkey has legitimate security concerns, but must keep military incursion into Syria limited

Ankara is justified in trying to secure its border, Matthew Bryza argues, but must not get bogged down in a major military campaign.