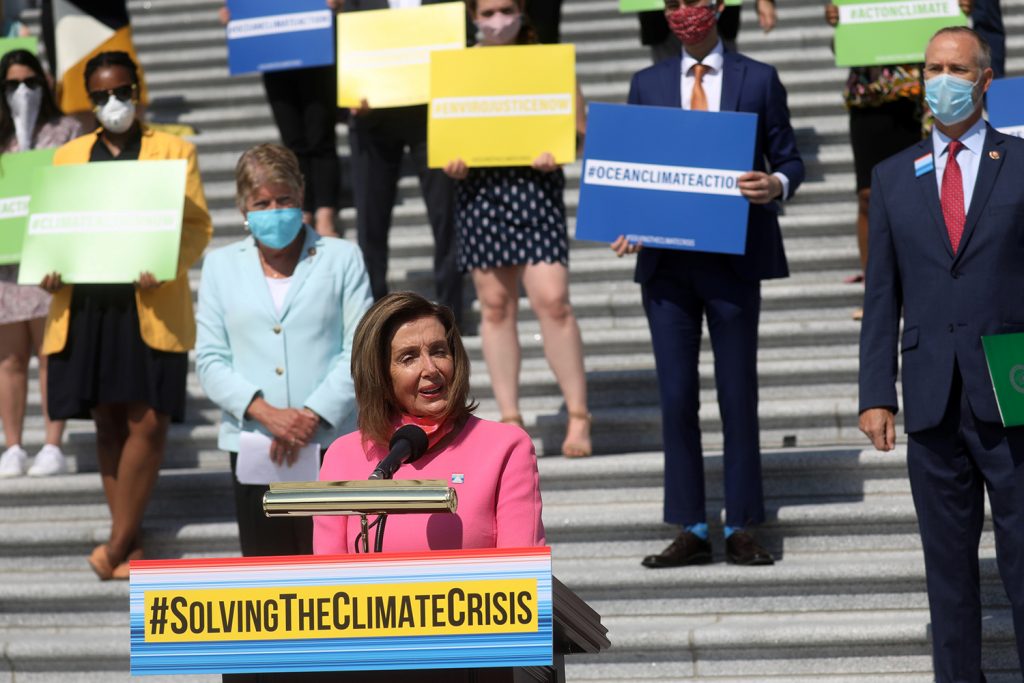 Coons was speaking at the Atlantic Council’s virtual “Common Ground on Climate Bipartisan Summit,” which took place as part of the Council’s 2021 Global Energy Forum. The event was moderated by CNN political commentator Van Jones and former Senator Kelly Ayotte, a Republican who previously represented the state of New Hampshire.

“If you’re a conservative, you should be for conserving everything, including our most important [asset]—our environment—no matter what your background is,” said Ayotte, now senior advisor for the nonprofit group Citizens for Responsible Energy Solutions.

Despite political polarization over the issue in recent years, climate change has also united Americans of various backgrounds, Coons pointed out.

“It’s exciting to me to see the broad coalition of folks from across our country—young and old, rural and urban, conservative and progressive, black, brown, white, gay, straight, Latino, of every background—seeing folks come together around finding solutions,” said Coons, who co-chairs the climate caucus with Senator Mike Braun (R-IN).

The realities of climate change are making new believers

“The biggest existential threat we face as a nation—and the world—is climate change,” said Coons, noting that Delaware in particular has the lowest average elevation of any US state. “We are really flat, and the piece of rock that Delaware sits on is sliding into the ocean, so sea-level rise has an impact all along our coastline.”

Among other things, he said, saltwater intrusion is plaguing the state’s rural areas, and ever-more powerful storms have had a major impact on agriculture there.

Noting that US President Joe Biden, his longtime friend and fellow Delawarean, has made climate change one of the top priorities of his new administration, Coons said he’s confident Democrats and Republicans can work together to confront this enormous challenge.

“The practical evidence is right in front of us. Despite years of climate denial, a well-funded, well-orchestrated, and profoundly maligned effort over decades to question, challenge, and undermine the scientific analysis that has led to a near-uniform conclusion in the scientific community that our climate is changing—and changing dramatically because of human activity,” he said. “That debate here in Congress has been overrun by facts on the ground.”

Citing studies showing that 2020 was the hottest year on record, Coons said “it doesn’t matter where you live in our country or the world. You’re seeing the impacts of climate—on our forests, on sea life like the lobsters of New England, on when spring comes, [and on] how mild winter is. Whether it’s talking to farmers or talking to folks living in low-lying areas in Delaware, the reality of climate change has made believers of the people in my state.”

Coons reported that he’s “hearing from folks who haven’t been a part of this conversation before, like the American Farm Bureau,” which recently came out in support of the Growing Climate Solutions Act of 2020. That proposal aims to encourage nature-based greenhouse-gas reductions in agriculture by connecting the private sector, which has ample capital and technical knowledge, with farmers, ranchers, and forest owners who want to participate in carbon markets.

“Why is this the time?” Coons asked. “Both because it’s getting hotter than anyone had imagined, and because we’re seeing players come to the table who previously had been resisting accepting the reality of climate change.”

Recalling his disappointment at past opposition to the Paris climate accord by some Republican members of Congress, Coons said he’s encouraged by Biden’s recent executive order to re-enter into the agreement. Along with caucus co-chair Braun, Coons hopes to lead a bipartisan delegation to the 26th United Nations Climate Change Conference of the Parties (COP26) climate summit in Glasgow, Scotland this November.

“It’s past time for the United States to regain its global leadership position in developing and deploying clean-energy technologies and taking advantage of the dramatically expanding world market for electric vehicles, for carbon capture and sequestration technology, [and] for advanced modular nuclear technology,” he said.

One notable success story, Coons said, is the Regional Greenhouse Gas Initiative (RGGI), a cooperative effort among eleven northeastern US states that has reduced power-sector emissions by 45 percent since 2008. Another is the Energy Act of 2020—co-sponsored by Senators Lisa Murkowski (R-AL) and Joe Manchin (D-WV)—that, among other things, will assist low-income households with energy retrofits, make federal buildings more energy-efficient, and provide $1.5 billion for new solar technologies.

LaHood said his GOP colleagues distrust the Paris agreement because it is difficult to keep other countries to their promises when it comes to slashing greenhouse gases. “Obviously, President Biden rejoined the Paris climate agreement, but how do we hold countries like China, India, and Pakistan accountable? I don’t think we’ve seen good progress on that, and that’s frustrating to a lot of Republicans,” he said. “We’re doing all these things and we’re abiding by [US commitments], but they continue to violate the rules. There’s no accountability. They haven’t had a good track record. If we can show there is an enforcement mechanism… that will satisfy many of the critics.”

Curtis, whose Utah congressional district includes coal-mining Carbon County, said he’s “worried that there’s too much shaming” in conversations between Democrats and Republicans on climate change.

“When somebody’s started on their path being better to the environment, we always tell them it’s not enough instead of [saying] ‘thank you’ for getting involved,” he said. “They want to engage, they want to have these discussions, but they quickly get uncomfortable and don’t feel like there’s any place for them at the table.”

Where to find common ground

One way to potentially create thousands of jobs is carbon capture, said McEachin. Another is rehabilitating buildings and putting electric vehicles on the road.

“We should be looking at every aspect of infrastructure, with an eye toward a green economy,” said the Virginia Democrat. “That’s going to create millions of jobs… and help bring us together to make sure we’re working in a bipartisan way.”

Yet he insisted that nuclear energy—which is opposed by many on the left—must be part of the energy mix because it is low-carbon and can be deployed rapidly on a large scale as the world reduces its dependence on fossil fuels.

“We have, as Democrats, chided our Republican colleagues by saying ‘you have to follow the science.’ Well, we have to look ourselves in the mirror sometimes and say the same thing,” said McEachin. “And the science I’ve heard and seen suggests that nuclear has to be a part of our future.”

LaHood added that lawmakers should also “be careful about how far we go” on climate change, noting that policies that are too far to the left—or too far to the right—have virtually no chance of passage. “So how do we find a reasonable approach—that common ground in the middle to find solutions on climate?” LaHood asked. The answer is focusing on market-based solutions such as technological innovation, he argued. “If there’s dialogue and discussion—not necessarily on the [Green New Deal]—but more in the middle, I think that’s the approach that will help get it to where we need to go.”

Image: U.S. Speaker of the House Nancy Pelosi holds a news conference with House Democrats to unveil a plan to cut nearly 90% of greenhouse gas emissions by 2050 on the steps of the U.S. Capitol Building REUTERS/Leah Millis