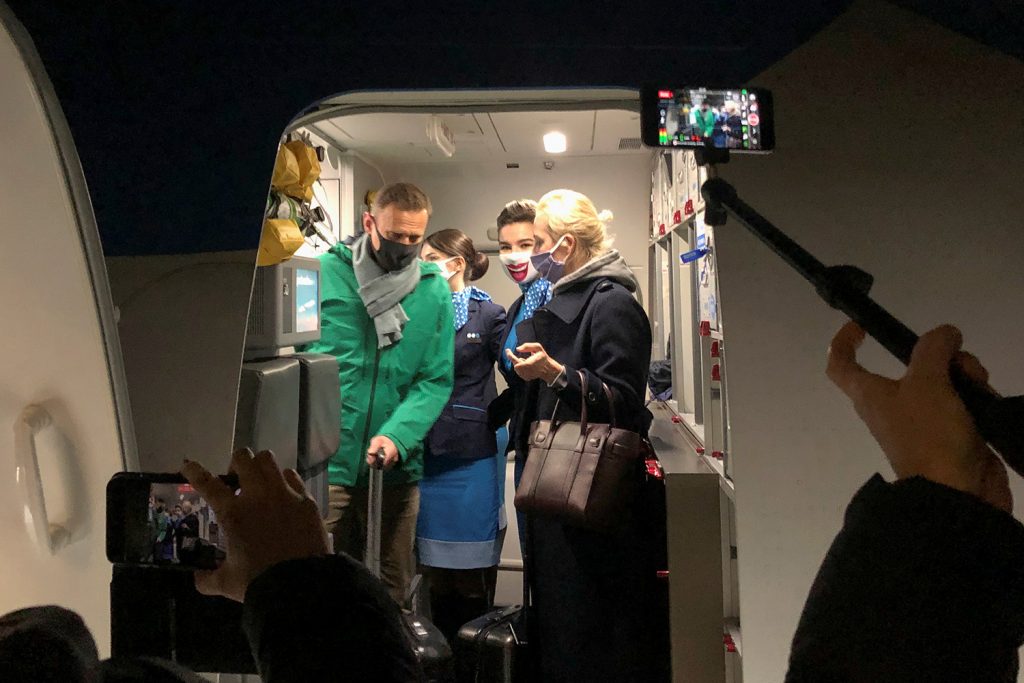 It’s an early and consequential challenge for the West and the Biden administration in particular: Not only was Russian dissident Alexei Navalny arrested upon returning to Russia on January 17, after recovering from an attempt to assassinate him with a deadly nerve agent, but the Kremlin has proceeded to violently suppress protests in response to the arrest.

What happens next matters. The US response (or lack of response) will show how much Russian President Vladimir Putin’s internal repression—including assassinations—will factor into the Biden team’s overall Russia policy. The trick for the Biden administration will be to respond with sufficient firmness and cross-Atlantic coordination to puncture Putin’s apparent sense of impunity while leaving space for cooperation with Russia where that makes sense.

It won’t be easy, but it will be possible to develop US policy that includes substantive responses to Kremlin repression at home, resistance to Kremlin aggression abroad, and cooperation with the Kremlin on a case-by-case basis. In fact, the Biden administration (and before that the Biden campaign) has already signaled that it is moving in just that direction.

On January 21, the first full day of the Biden presidency, White House Press Secretary Jen Psaki announced that the United States would seek a five-year extension of the US-Russia New START strategic arms-control treaty. In that same briefing, Psaki added that President Joe Biden had “tasked” the US intelligence community with assessing Putin’s cyber espionage, meddling in the 2020 US election, alleged bounties placed on American soldiers in Afghanistan, and use of a nerve agent against Navalny. “Even as we work with Russia to advance US interests,” she added, “so too we work to hold Russia to account for its reckless and adversarial actions.”

Not bad: cooperation without apology and hints of pushback without guilt. Even better, the new US administration has responded strongly to the mass arrests of Russian demonstrators, calling for Navalny’s release.

The Biden team will want time to sort out its options for responding to those and other malign actions by the Kremlin. But, as often occurs in international affairs, the ideal timeframe for deliberation is being overtaken by events. Navalny’s arrest, the ensuing protests of tens of thousands of Russians, and the prospect of a long prison sentence for him call for a prompt US response to demonstrate that the administration is in fact prepared to “hold Russia to account.”

Fortunately, there are options.

One is to impose sanctions on those Russian officials responsible for the attempted murder and the arrest of Navalny. Back in October, the European Union (EU) imposed sanctions on six senior Russian officials for the attempted assassination of Navalny, among them Alexander Bortnikov, head of the Russian Federal Security Service (FSB); Sergei Kiriyenko, former Russian prime minister and now first deputy chief of staff in Putin’s presidential administration; and Andrei Yarin, head of Russia’s Presidential Domestic Policy Directorate.

The Trump administration did not impose any sanctions. The Biden administration can and should. Though identifying those responsible for the attempt on Navalny’s life may take time, it should not take too much time if US Intelligence Community and State Department analysts are given the task (and work with independent Russian and outside investigators, like the UK’s Bellingcat, which has already identified the FSB officers directly involved). We expect that some in the administration have already done some of the preparatory work.

Another option is to sanction members of Putin’s unofficial circle of cronies and partners in Russia’s system of repressive kleptocracy—to, in other words, hold responsible the Putin system in general for outrages like murder and attempted murder of political opponents. This is not a new idea. The Obama administration started imposing sanctions on longtime Putin cronies in 2014, after Putin attacked Ukraine. The Trump administration did the same in April 2018 (though in an ill-prepared manner that resulted in it having to partly walk back one of its most significant sanctions designations, against oligarch Oleg Deripaska). The point was to demonstrate to Russian leadership (and to Russian society) that Putin is not invulnerable and cannot protect “his” people from retaliation for his aggression. A number of Russian pro-democracy dissidents have even argued that going after Putin’s circle is more effective (and more appreciated by Russians) than imposing broader economic sanctions.

In fact, as Navalny returned to Moscow on January 17, his collaborator in London, Vladimir Ashurkov, released on social media a list of eight Russian figures who Navalny thought should be sanctioned as “decision makers and the people who hold their money.”

That list included two major businessmen: Roman Abramovich, a Yeltsin-era oligarch and an early financial backer of Putin, widely considered to have been one of the people who selected Putin as president, and Alisher Usmanov. It also included two money men, each controlling a state bank that some analysts believe Putin uses as a slush fund: Andrei Kostin, president of state-owned VTB Bank (designated by the United States in April 2018) and Igor Shuvalov, now CEO of the Russian government development bank VEB (which financed the 2014 Sochi Olympics from its balance sheet).

The last two on Navalny’s list are “princelings,” children of the Putin elite: Dmitri Patrushev, the son of Secretary of the Security Council Nikolai Patrushev, a former FSB director who has already been sanctioned by the United States; and Denis Bortnikov, the son of the current FSB director Alexander Bortnikov. Navalny claims that Denis Bortnikov has acted “as a ‘wallet’ for his father’s ill-gotten gains.” There is precedent for sanctioning princelings: In April 2018, the United States sanctioned two such figures: Igor Rotenberg and Kirill Shamalov.

Navalny has also accused Russian Health Minister Mikhail Murashko of being “responsible for covering up [Navalny’s] poisoning and hindering efforts to evacuate him to Germany for medical treatment.”

A third option for the US government—and a somewhat heavier-handed one—would be to fully sanction Russian sovereign debt or financial institutions tied to Putin, like VEB. Those options have been available for years, and the attempted assassination and arrest of Navalny might be good reason to invoke them. There is some precedent for this in the case of the Putin regime’s 2018 use of nerve gas on UK territory against Sergei Skripal, a Russian double agent for the British, and his daughter. At the time, the Trump administration responded by imposing limited financial sanctions against Russian sovereign debt, using authorities in the Chemical and Biological Weapons Act that would also be appropriate to use in the Navalny case. Those sanctions could be expanded to cover all new issuance of Russian sovereign debt or to other state-run piggybanks.

With the EU already considering additional sanctions in response to the Navalny arrest, the moment is ripe for joint action. The United States should seek to coordinate its response with Europe and the United Kingdom (and Canada) as much as possible. As it does so, it should carefully consider unintended consequences such as putting people out of work, since sanctioning an oligarch means that companies that he owns fall under sanctions themselves. If the EU is unable to rally all twenty-seven member states behind a sufficiently strong sanctions package, the United States should also consider what measures it is prepared to take beyond any joint action to create its desired impact.

A fourth option, and a step that should be taken in any event, is to accelerate work to cut off channels for Russian illicit financial flows to offshore—especially US and other Western—havens. Putin’s circle enjoys the benefits of investing their ill-acquired funds in secure Western banks even as their patron acts against the system that benefits them. There is no need to let Putin, or other corrupt actors, have it so easy. The Biden team has already made anti-corruption a top-tier issue. Late last year the US Congress passed legislation closing a notorious loophole for corrupt financial flows by requiring disclosure to the US government of the true (“beneficial”) owners of LLCs, ending anonymous ownership that facilitated money laundering. This too should be done in coordination with the EU and, critically, the United Kingdom.

A coordinated transatlantic response to the clampdown on Navalny would send a message to the Kremlin and the Russian people of Western determination not to accept Putin’s way of repression. Doing so in the wake of US efforts to extend New START would show that the United States is not cutting off all ties with the Russian government and that it can pursue a policy that combines different elements.

The president’s foreign-policy team is not yet in place. Only National Security Council staffers are in their offices, while State Department leaders with hands-on knowledge of Russia policy—especially Secretary of State-nominee Antony Blinken and Undersecretary for Political Affairs-nominee Victoria Nuland—are out of action until the Senate acts (hopefully soon) on their nominations. Nevertheless, the Biden team will have to forge its Russia policy under the pressure of events. What the new administration decides to do in the Navalny case will set precedent for dealing with similar outrages by other governments—like the Saudi government’s murder of Jamal Khashoggi—that are sure to come in the future.

The Biden administration has every chance to get this right: a strong response to Putin’s latest repression, developed in tandem with Europe, as part of an integrated Russia policy that is responsive not just to problems but also, hopefully, opportunities.