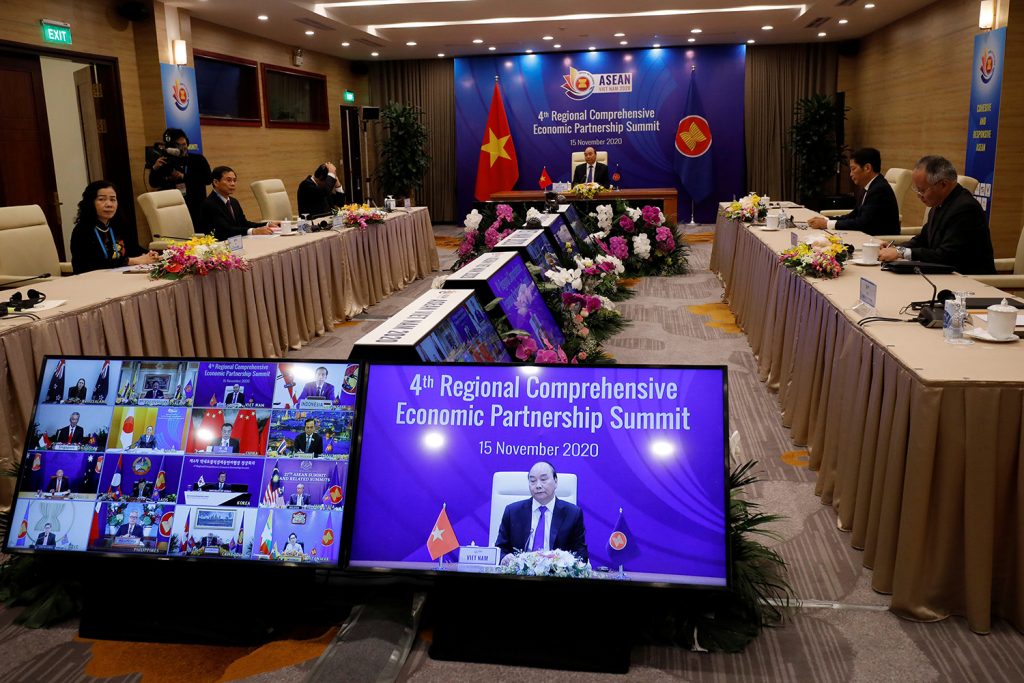 After eight years of negotiations, ten Association of South East Asian (ASEAN) nations and five other Asian countries (China, Japan, South Korea, Australia, and New Zealand) finalized the Regional Comprehensive Economic Partnership (RCEP) on November 15, bringing together about 30 percent of world’s population and gross domestic product (GDP) under the new free trade agreement. This new arrangement will compete with the European Union (EU) as the world’s largest trading bloc, and will be the most important economic configuration in Asia, totaling a 27.4% share of global trade, compared to 15 percent for the Comprehensive and Progressive Agreement for TransPacific Partnership (CPTPP).

The RCEP’s main winner will be China, which has secured a dominant position in one of the world’s most dynamic economic regions, giving Beijing the opportunity to establish its preferred rules and standards, and providing a major advantage for its companies to exploit these valuable markets. The United States, on the other hand, sets to lose out from sitting on the sidelines, as its attempts to re-shore US manufacturing and promote Western-backed trade rules could be dented by the new trade agreement.

Despite its topline numbers, many observers have cautioned that the agreement itself is “shallow,” containing only twenty chapters without any commitments to deep tariff cuts or structural reforms. In particular, RCEP does not have a chapter on labor rights or the environment, and offers weak protection of intellectual property rights. RCEP members committed to reduce tariff rates on about 80-90 percent of the current tariff lines, to be contained in a series of bilateral tariff schedules—with carveouts for politically-sensitive agricultural sectors. By comparison, the CPTPP when fully implemented will reduce tariff rates to zero on 99 percent of tariff lines. The RCEP also does not address the problems of industrial subsidies and state-owned enterprises. While disallowing data localization requirements, it does not prohibit countries from requiring the disclosure of source codes (like in the Trans-Pacific Partnership or the US-Mexico-Canada trade agreement). RCEP will create common rules of origin for the whole bloc, however, so that one country-of-origin certificate will suffice in shipping goods across the membership, reducing intra-RCEP transaction costs. As configured, this set-up serves China’s needs very well, securing a lower tariff trading environment in Asia without any change to China’s model of state capitalism, as has been demanded by the United States and the EU.

RCEP is set to be a major boon to its participating countries, while a missed opportunity for those left out. According to the Brookings Institution, China stands to gain the most income from RCEP ($100 billion) by 2030, followed by Japan ($46 billion), South Korea ($23 billion), and Southeast Asia ($19 billion). Being excluded from RCEP (and having withdrawn from the TPP) the United States will forego about $131 billion of expected come gain, while India’s decision to sit out this agreement will forego about $60 billion of income.

To participate in the economic windfall from this new agreement, US and EU companies will need to invest in production facilities within RCEP countries, potentially endangering US efforts to re-shore manufacturing activity and employment back to the United States. Many of these companies are highly reliant on production in China and will likely try to diversify their supply chains, but they will probably achieve this by moving production elsewhere in Asia instead of going back to the United States. The big winners from this could be Southeast Asian countries, especially Vietnam.

RCEP represents a significant strategic step forward for China—cementing trading relationships with the most populous and dynamic region of the world, whose GDP is estimated to constitute more than half of the global economy by 2050. Asian growth is increasingly driven by intra-Asian trade—already accounting for more than half of the region’s total foreign trade. With RCEP and CPTPP, the intra-Asian trade share will certainly rise further, to match the 60 percent ratio of intra-EU trade to its total trade.

RCEP, together with the Belt and Road Initiative (BRI), has enabled China to build out a viable economic space for itself—one where it has been influential in establishing trading rules and standards to the exclusion of the United States and the EU. Moreover, growing economic relationships with China stimulated by RCEP and BRI will enable China to leverage its trading, investment, and financing capabilities to compete for political influence throughout the region against the United States and the West. China’s influence can be observed in the support it receives from developing countries in international organizations and fora—in particular through their defense of China against criticisms of human right violations by the West. More importantly, China also aims to use its economic levers to gain adherents to its new technologies including 5G and 6G mobile telephony; artificial intelligence (AI) and surveillance systems; and its recently launched global positioning and navigation system Beidou as a competitor to the US-controlled GPS. This will also allow China to push its standards in these emerging technologies to be adopted by large portions of the world—helping its high-tech companies surpass its competitors in the EU and United States.

Besides giving China the leg up in its competition against the United States, RCEP also raises two major issues. India’s withdrawal from the pact out of fears of sharply rising trade deficits with China and others—even though India has left the door open to participate in the future—has tilted the originally-balanced RCEP toward Chinese dominance. This could raise questions about the sustainability of RCEP if China uses its dominant economic power to “punish” countries which are critical of its policies. An obvious example is China’s unilateral use of trade and investment restrictions against Australia, after the latter demanded an internationally independent investigation of China’s lack of transparency at the beginning stages of COVID-19 and criticized China’s policies in Xinjiang and Hong Kong.

RCEP has also helped deepen the fragmentation of the World Trade Organization-based global trading system, following a plethora of regional trade agreements which have created a multitude of trading regimes and tariff schedules. This has increased the complexity and transaction costs of cross-border commerce compared with a truly global trading system, to the detriment of all countries.

The competing multilateral and national visions for the WTO and the global trading framework among members will need to be reconciled for the organization to be able to pick a new DG.