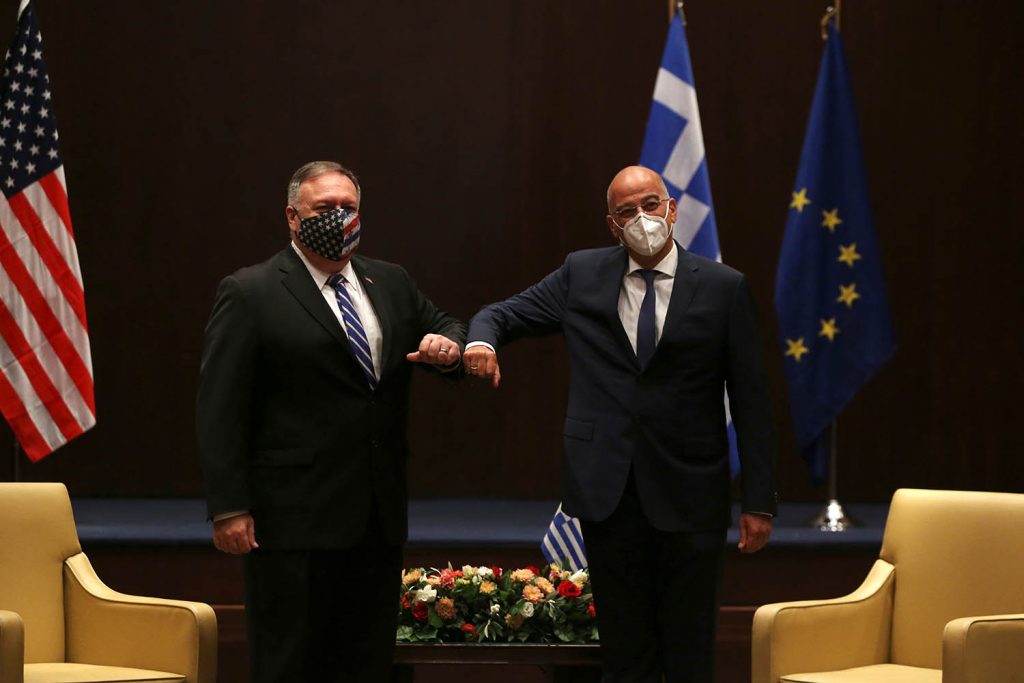 When US Secretary of State Mike Pompeo arrived on September 28 in Thessaloniki—Greece’s second largest city and a port that has been a gateway to the Balkans throughout its rich and long history—it marked his second trip to Greece in less than a year. Skipping the capital Athens for Northern Greece and Europe’s southernmost island of Crete, where he is scheduled to visit a US naval base, the trip aims to highlight the strategic significance of Greece for both Southeastern Europe and the Eastern Mediterranean. At a time of heightened tensions between Greece and Turkey that has led many to call for international diplomacy and de-escalation, Pompeo also weighed in on the situation, noting that the conflict over maritime zones should not be resolved through shows of force or demonstrations of power, but through dialogue and institutions.

But rather than being simply an effort to mediate among the parties, Pompeo’s trip has focused on the bilateral US-Greece relationship, on a strategic as well as a personal level. In Crete, Pompeo will meet with the Greek Prime Minister Kyriakos Mitsotakis and will have a taste of Greek hospitality first-hand, as a guest staying at the prime minister’s family house. Relations between Greece and the United States are “at a generational high,” a State Department official said ahead of the trip. He noted that Secretary Pompeo’s visit will highlight the many successes of the past year, including in areas of strategic interest to the United States such as energy diversification, security and economic cooperation.

According to Congressional testimony by then Assistant Secretary of State Wess Mitchell in June 2018, the United States is “cultivating Greece as an anchor of stability” as part of a long-term strategy to bolster its presence in the region. The stop in Thessaloniki is meant to demonstrate exactly how the two countries have been investing in the future of the Eastern Mediterranean and the Balkans. While in town, Secretary Pompeo met with his Greek counterpart Nikos Dendias and hosted a gathering of energy sector business leaders to highlight energy diversification and infrastructure projects in Greece.

Those projects include rising US exports of liquefied natural gas to Greece, the completion of the Trans-Adriatic Pipeline—which is scheduled to start bringing non-Russian gas to Europe in 2020—planned interconnectors to Bulgaria and North Macedonia that diversify routes and energy supplies to Southeast Europe, as well as the support of the US International Development Finance Corporation for projects in the Alexandroupolis and Kavala ports. Pompeo’s schedule also included the signing of a science and technology agreement, a first in forty years that is testament to Greece’s progress in intellectual property rights protection, also highlighted by recent investments and acquisitions by US heavyweights such as Pfizer and Microsoft.

Energy and technology are strategically important, yet the second leg of his trip to Greece in Crete will underline the security aspect of bilateral relations by focusing on military to military cooperation. A revision and expansion of a Mutual Defense Cooperation Agreement with Greece last year enabled the expansion of bilateral activities in Larissa and Stefanovikio, assured US access at the port of Alexandroupolis, and increased activity at Souda Bay, which is arguably the most valuable nautical base for US interests in the Eastern Mediterranean.

During his visit there, Pompeo is expected to reiterate US commitment to the security of the region. To do so from Crete has high symbolism in Greece, as Turkey does not recognize that Greek islands, including the biggest one Crete, have a maritime right to an Exclusive Economic Zone (EEZ). Over the summer, Turkey conducted seismic research for hydrocarbons in contested waters, including in an area off Crete that it claims for itself in its Memorandum with the Government of National Accord in Libya.

Even as the State Department official denied that good relations with Greece come at the expense of relations with Turkey, not visiting Ankara during this (and his previous) trip to the region was noted in Turkey. Pompeo made a last-minute stop in Cyprus on September 12, when he echoed President Trump’s earlier message to both leaders for a diplomatic solution to the confrontation—a prospect that the Greek prime minister has also called for, saying he’s even open to settling the matter at an international court, but not under the threat of “gunboat diplomacy.”

In a joint declaration after the secretary’s meeting with Minister Dendias, the United States “welcomed Greece’s confirmed readiness to engage with other countries in the region to achieve maritime delimitation agreements through dialogue and in accordance with international law.” The United States has also welcomed a German initiative to kickstart the dialogue between the two countries. And once the Turkish research vessel Oruc Reis and the warships that accompanied it returned to port, the window opened for exploratory talks to resume. To be sure, NATO is also working on a de-conflicting process to avoid an accident in the event of a new face-off of the two navies.

Despite that risk, the prospects for further US-Greek bilateral cooperation look ever brighter. In their joint statement, Greece and the United States declared their “dedication to enhancing their close cooperation as NATO Allies, using all appropriate means at their disposal, to safeguard stability in the wider region.” They also reiterated their support “for the integration of all the countries of the Western Balkans into European and transatlantic institutions according to the choice of their citizens.

This could be one of the secretary’s last trips abroad ahead of the November presidential elections. And the US focus on foreign affairs could dwindle during the transition to a new administration. Even as diplomats from the United States and Greece herald an unprecedented alignment of interests, this is no time for complacency or neglect. Military conflict between Greece and Turkey would take the region years back, and test not only bilateral gains, but also NATO’s cohesion and US interests in the wider region.

Katerina Sokou is the Washington DC correspondent for “Kathimerini” Greek Daily and SKAI TV and a nonresident senior fellow at the Atlantic Council. Follow her on Twitter @KaterinaSokou.

Lifting the arms ban on the Republic of Cyprus is good policy, despite the timing

A Republic of Cyprus that has more accurate radar, search-and-rescue capabilities, and maritime-surveillance equipment can be a better partner of the United States and other nations in the Eastern Mediterranean where we share common interests.

With crisis over, Greek PM says Athens is ready “to punch above our weight”

With its new robust regional and international role, Mitsotakis argued that Greece is a “very reliable and dependable partner” for the United States at a time of incredible global instability. With the dark days of economic crisis behind them, it is now time for Athens and Washington, he said “to set a new, more ambitious target in terms of what we can achieve.”