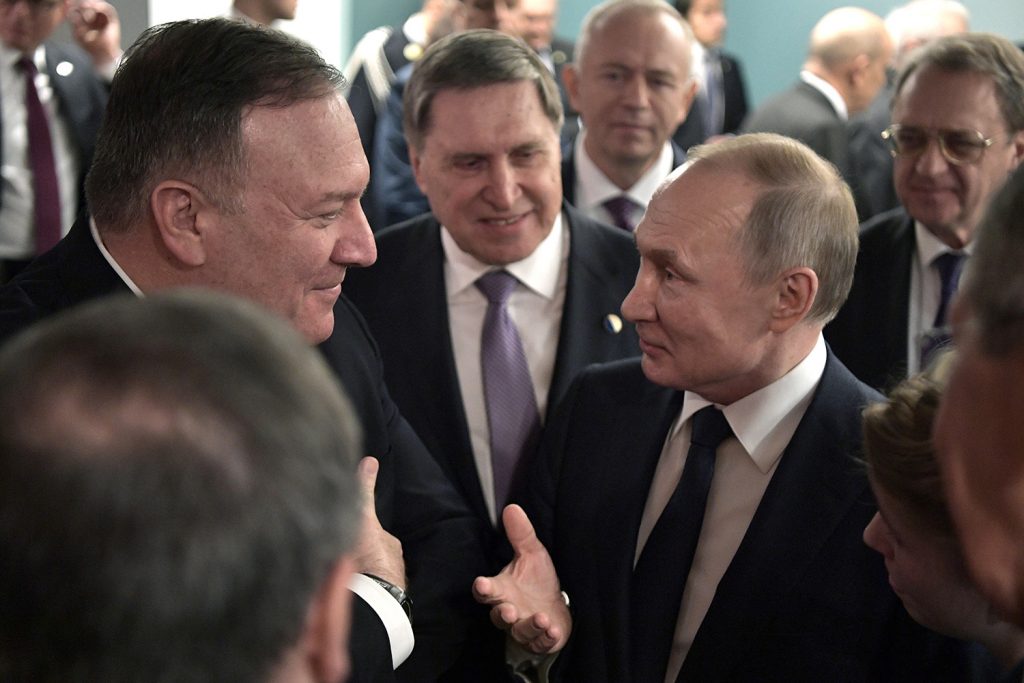 The New START (Strategic Arms Reduction Treaty) entered into force nine years ago and will expire on February 5, 2021, just a few days after the inauguration of the next US president. The treaty limits the strategic nuclear warheads and intercontinental delivery systems of the United States and Russia in a balanced and verifiable effective manner, Both sides have fully complied with the treaty.

By its terms, the treaty can be extended for up to five additional years without renegotiation or ratification. The Trump administration has thus far refused to extend the treaty, however, citing the fact that it does not cover all categories of Russian nuclear systems and because it does not limit Chinese nuclear forces in any way.

US and global security would be greatly enhanced by extending New START for another five years. Extension would preserve the last effective and verifiable agreement that limits the strategic arms competition between the United States and Russia and make it easier to maintain deterrence and strategic stability by allowing both sides an assured second-strike capability.

Extending New START would also ensure a high degree of predictability about Russia’s future strategic posture through its intrusive verification and transparency regime. By reducing uncertainty about Russia’s future force size and structure, extension would diminish the need for worst-case assumptions that could drive up the cost of US force modernization programs and create anxiety among some of our allies.

In fact, extending new START would help maintain the domestic and Allied political consensus in favor of strategic force modernization and NATO’s nuclear strategy and force posture. The ratification of New START ten years ago was the precondition for Democratic support for nuclear force modernization, just as fully funding modernization was the precondition for Republican support for New START. This remains the political reality today.

Like many members of Congress, our NATO Allies are also wedded to a “dual track” approach to nuclear weapons and force modernization more generally. They believe deterrence and dialogue with Russia should go hand in hand. Allied consensus behind the force improvements that NATO has made in response to Russia’s invasion of Ukraine is based on an agreement to continue political dialogue with Moscow through the NATO-Russia Council. (That dialogue may be unproductive, but it’s politically important nonetheless.)

This need for a dual-track approach is even more evident when it comes to the decisions Allies will need to take in the coming years to modernize and increase the readiness of NATO’s nuclear deterrent capabilities. Allies have reaffirmed on numerous occasions that, as long as nuclear weapons exist, NATO will remain a nuclear alliance. But it’s no secret that there is significant opposition in several of the countries that host US tactical nuclear systems to continued reliance on nuclear deterrence and NATO’s longstanding nuclear sharing arrangements.

Just last month, the Belgian parliament came close to ratifying the treaty on prohibition of nuclear weapons and there is considerable support for the nuclear ban treaty in the Netherlands as well. Germany has repeatedly postponed a decision on whether to include a nuclear capability in the replacement for its Tornado nuclear-capable fighter jets and there are growing strains on this issue within the ruling coalition in Berlin. US unwillingness to extend New START could strengthen anti-nuclear sentiment in these and other countries, jeopardizing the NATO consensus.

The same risk exists with respect to decisions that will be needed on measures to counter Russia’s violation of the Intermediate-Range Nuclear Forces (INF) Treaty—choices that will need to be based on NATO consultations and agreement by potential basing countries. Allies will be more reluctant to endorse US recommendations for additional nuclear or conventional capabilities targeted on Russia—or to reorient NATO missile defense away from Iran and toward Russia—if these steps are in the context of an unraveling New START regime and a new arms race.

Nevertheless, New START is not perfect or of timeless value. The strategic environment has changed in the past decade, and the Trump administration raises valid criticisms about the treaty’s short comings that will need to be addressed in the future:

Allies don’t dispute these concerns. But extending New START will give us additional time to negotiate long-term solutions to both sets of concerns while preventing the Russians from launching a rapid build-up of warheads and delivery systems in excess of New START ceilings. Given the asymmetry in US and Russian modernization cycles, Russia is much better positioned to break out of the treaty limits in the next five years by uploading extra warheads or activating non-deployed systems. As the negotiator of New START, Rose Gottemoeller argued last year that the United States shouldn’t give Russia the opportunity to “outrun” us.

Regarding new systems, Russia has stated explicitly that the Sarmat heavy ICBM and Avangard hypersonic missiles are covered by New START today. The more exotic new systems won’t be ready for deployment in the next five years. Extension will provide sufficient time to devise ways to capture these systems in a follow-on treaty and design additional limits and verification procedures.

That time could also be used to develop an approach to limiting and verifying constraints on non-strategic nuclear weapons (which has been considered too difficult in the past) and, perhaps, a successor to the INF Treaty that would limit the numbers of INF missiles—Russian, American, and perhaps those of China—to include the Russians’ already deployed system, the 9M729, that caused the demise of the original INF Treaty.

Including China in future arms control arrangements is a worthwhile goal, but it is not as urgent as extension of New START. China maintains a minimum strategic nuclear deterrent, with around three hundred warheads—roughly five percent of the numbers possessed by the United States and Russia—as well as several hundred INF-range missiles. These forces do not, at present, affect strategic stability or undermine the benefits of the bilateral New START.

But the United States should not give China a free pass indefinitely, particularly as Beijing is also expanding its forces and introducing hypersonic technology. Washington should enlist Russia’s help in engaging with Beijing in strategic stability talks (trilateral and bilateral). The aim would be to educate China about deterrence and show that it’s in China’s own interest to work with other nuclear powers to strengthen stability and predictability.

Extending New START shouldn’t be held hostage, however, to Chinese agreement to join the process, which may take years given their strong opposition today. In fact, foregoing five more years of New START because of China would be seen by US Allies as a smokescreen for abandoning arms control altogether and potentially open a rift inside NATO on essential force modernization.

Finally, a word about New START’s importance in managing the increasingly nasty political relationship between the West and Putin’s Russia since the invasion of Ukraine in 2014.

Today’s competition with Russia is in many ways riskier and less stable than the US-Soviet relationship during the last decades of the Cold War. Back in the late 1960s, 1970s, and 1980s, both sides were able to lower tensions and reach agreements, including the Helsinki Final Act, that established mutually agreed rules for the East-West competition, at least in Europe. Détente in political relations gave impetus to negotiations on strategic and conventional arms control as well as a range of confidence and security-building measures like the Organization for Security and Cooperation in Europe (OSCE) Stockholm Document.

With the end of the Cold War and the peaceful break-up of the Soviet Union, Washington and Moscow went beyond peaceful coexistence, working with Mikhail Gorbachev and Russian President Boris Yeltsin to build a pan-European security system based on shared principles that were embodied in the Charter of Paris and the NATO-Russia Founding Act. This course continued under the early Putin and Medvedev administrations, with both sides dramatically reducing military forces in Europe up until 2014.

As late as 2013, Russia and NATO were even discussing potentially game-changing cooperation to link our missile defenses against rogue states.

Today, however, Russia has joined the ranks of rogue states. Putin’s Russia no longer accepts the rules of the game defined by the agreements mentioned above. Today’s Russia is actively working to undermine the international rules-based order—changing borders by force, violating the sovereignty and territorial integrity of its neighbors and blocking their path toward NATO and the European Union. It is actively working to destabilize Western societies through corruption, cyber-attacks, and disinformation, and trying to discredit our democratic institutions.

This is a far more difficult environment than the period when New START was negotiated. Although the United States and its allies have done a lot to bolster deterrence and reduce their vulnerability to cyber-attacks and other hybrid threats, the risk of a military incident spiraling into a major conflict cannot be easily dismissed. Maintaining strategic stability through an extension of New START can help reduce the chances of such an accidental conflict going nuclear.

Indeed, New START is now an even more important tool than when it was signed for keeping the competition with Russia within bounds, which is the strongest argument for extending the treaty while the United States works on dealing with new Russian weapons and the inclusion of China.

The United States and its allies need to compete more effectively with Russia in many other areas:

The United States is more likely to succeed in managing relations with Russia if it focuses our resources and political energies on these areas of competition, rather than triggering an accelerated—and expensive—strategic arms competition that could follow the collapse of New START.

President Putin has made clear Russia is ready to extend New START without preconditions. Although Russia has violated the INF Treaty and other agreements, it has complied with New START and upheld its side of the verification and transparency regime. Russia is better placed to break out than the United States in the next five years. The United States would therefore be wise to pocket the extension, keep its allies on board, and use the additional time to address the longer-term challenges posed by Russia and China.

Alexander Vershbow is a distinguished fellow at the Atlantic Council and the Wolk Distinguished Visiting Fellow at the University of Pennsylvania’s Perry World House.  He is a former NATO deputy secretary general, US assistant secretary of defense, and US ambassador to Russia, NATO, and South Korea. This article is based on remarks at a briefing hosted by the Arms Control Association at the National Press Club in Washington DC on January 28, 2020.

In congressional testimony, Atlantic Council’s Alexander Vershbow says US allies concerned “we  may have given a gift to President Putin.”

Trump right to call out Russia, but is quitting an arms control treaty the answer?

The Russians have “not only broken the INF Treaty, they have stomped all over it for well over a decade at least,” said Ellen O. Tauscher, a former US under secretary of State for arms control and international security.