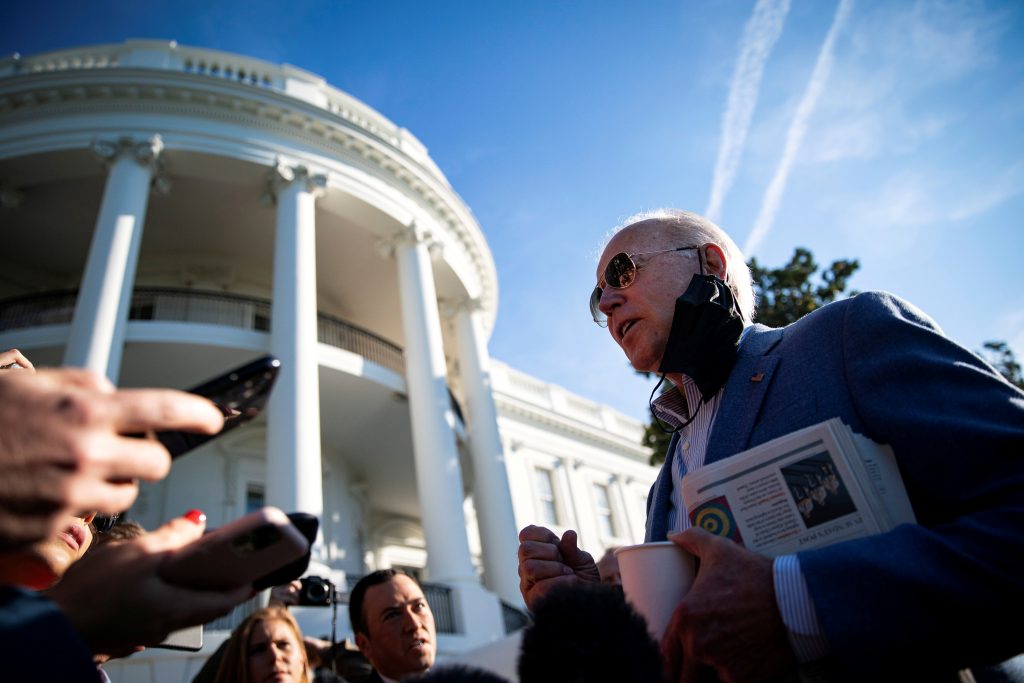 As US President Joe Biden faces down an ever-widening array of domestic and foreign-policy challenges, his election pledge to bring the country back together still seems like a far-off dream. So what issue is there in the United States’ politicized policy landscape that could allow him to do just that? What unites conservatives and liberals, businesses and labor unions, enabling the United States to counter autocratic enemies while also protecting American democracy and defending American jobs?

Fighting corruption, that’s what. Exposing and punishing corruption at home and abroad can be a big theme of the president’s agenda—not just because such a campaign appeals to disparate domestic groups, but also because it is bound up in many of the core objectives he’s staked out for the United States in the world.

The release of the Pandora Papers this week has once more exposed how easily the wealthy and powerful can hide money beyond the reach of investigators and tax authorities. Some of that money comes from bribes paid to politicians by businesses around the world, including American businesses.

“Corruption fuels inequality, siphons off a nation’s resources, spreads across borders, and generates human suffering. It is nothing less than a national security threat in the twenty-first century,” Biden told the United Nations General Assembly in September. “Around the world, we’re increasingly seeing citizens demonstrate their discontent seeing the wealthy and well-connected grow richer and richer, taking payoffs and bribes, operating above the law while the vast majority of the people struggle to find a job or put food on the table or to get their business off the ground or simply send their children to school.”

There’s more to this than just words. The White House published a National Security Study Memorandum earlier this year that promises to create a unified set of policies around the issue. Biden has made specific commitments to focus on corruption among the first orders of business, including organizing a summit of democracies now scheduled for December that will focus on achieving results on three fronts: combating corruption, guarding against authoritarianism, and promoting human rights.

Why is the issue gaining prominence? As economies and financial systems opened up and deregulated in the past few decades, proponents of globalization hoped free markets would prove to be a weapon against authoritarians. But in practice, those authoritarians have weaponized corruption, exploiting free markets to enrich themselves and threaten democracies.

As Biden put it at a 2018 democracy summit in Denmark, “Corrupt money is the preferred tool of authoritarian regimes seeking to undercut democratic governance across the board—especially in fledgling democracies that lack robust institutions to defend the rule of law.” China and Russia have both proved especially adept at strategically deploying corruption in this manner.

Biden also considers corruption a hindrance to global development. “It doesn’t matter where you live if people cannot get educated; or they get educated and they can’t get a job; or they get a job and can’t earn a decent living; or they can earn a living, but it gets siphoned off or stolen by corruption,” he said at the Global Entrepreneurship Summit in 2014.

Anti-corruption is a plank in what the president has called “foreign policy for the middle class,” an effort to demonstrate that the globalized world belongs not just to the wealthy and powerful but also to the broader public. This foreign policy would function “as a dependent variable” of Biden’s domestic policy, James Traub wrote in Foreign Policy last year, and would “express the idea that trade and international economic policy must be guided by the benefits they will bring to average Americans—rather than to American multinationals.” By helping remove unfair advantages for foreign competitors, fighting corruption can also help boost US exports and save American jobs.

The United States has, of course, been a strong campaigner against corruption for decades. Its track record goes back to scandals in the 1970s that led to the Foreign Corrupt Practices Act (FCPA), which targets corruption abroad and punishes offending US companies and foreign companies that do business in the United States. The law has proved to be a powerful disincentive to bribery and helped diminish corrupt behavior more generally as US prosecutors chase global companies, while encouraging other governments to pass similar legislation.

But on matters such as this one, it’s important to not exaggerate the degree of support they enjoy. In 2017, then President Donald Trump reportedly told then Secretary of State Rex Tillerson that FCPA should be scrapped because of the negative impact it had on US businesses. That didn’t happen. But many in the corporate world consider the act onerous. Some US business leaders fear that anti-corruption measures tie their hands in markets where others—especially Chinese companies—operate unfettered. Compliance with anti-corruption measures won’t be popular in this sector if it is seen as limiting American progress in, for example, financial technology.

And in many ways, corruption is also getting easier. As the World Bank reports, “The digitization of the global financial system has vastly lowered costs and increased the scale of the multinational schemes that underpin illicit financial flows.” One reason why many of the world’s most powerful were not included in the Pandora Papers is they have other, more sophisticated ways to hide their assets.

The United States took a big step forward in 2020 with the Corporate Transparency Act, buried within the vast National Defense Authorization Act. One industry group calls it the “biggest financial crime and compliance update since the 2001 U.S.A. Patriot Act.” The law requires companies in the United States to tell the Treasury Department about their ultimate beneficial owners, making it harder to anonymously launder money or dodge taxes. Campaigners had wanted that information to be available to everyone, but there were opposing views, including from Treasury. And because of pressure from some financial groups, not all investment vehicles are covered in the legislation.

The law represents “a powerful victory against a magnet for criminals of all stripes,” notes the Association of Certified Financial Crime Specialists, since “shell companies have been linked to organized criminal money laundering and drug trafficking syndicates, massive frauds, grand corruption, tax evasion and terror finance.” But there’s more to do. The wide-ranging review that the White House has begun will raise issues in financial services, tech, business, national security, immigration, and trade.

In seeking to do more, Biden will encounter a host of challenges beyond roadblocks in Congress. It won’t always be straightforward, for example, to draw clear lines over corruption in countries where boundaries between individuals, families, political parties, businesses, and the state are hard to make out. And some governments with which the United States works closely are at best ambivalent about rooting out corruption and at worst plain corrupt. The list of those exposed by the Pandora Papers includes leaders from Ukraine, Chile, and Jordan: US partners. Just as previous administrations have had to make uncomfortable choices between ethics and self-interest when it comes to human-rights issues, so too will the Biden administration as it deals with long-time partners with corrupt habits and institutions.

The work of combating corruption can be dramatic and visible—involving arrests, sanctions, asset seizures, visa refusals, and open-source investigations to identify stolen property—but it’s not always so. In fact, it is often gritty, detailed, administrative, and policy-heavy: developing standards and anti-money-laundering laws, establishing corporate registration, cultivating legal cooperation. These can take years.

Biden continues to contend with a vast sea of disinformation and misinformation involving allegations of corruption on the part of the president and his son Hunter, which seem unlikely to ebb. He’ll face critiques from within his own party as well. As Zephyr Teachout, a law professor and politician from the progressive wing of the Democratic Party, wrote in an article making the case that “Biden has a big corruption problem”: “It looks like ‘Middle Class’ Joe has perfected the art of taking big contributions, then representing his corporate donors at the cost of middle- and working-class Americans. Converting campaign contributions into legislative favors and policy positions isn’t being ‘moderate’. It is the kind of transactional politics Americans have come to loathe.” That was written in the heat of the Democratic primary campaign, but it underscores a key point: For Biden, taking on corruption will be a way for him to demonstrate that he wants to address the issue of money and how it influences politics and power dynamics. Historically, after all, his home state of Delaware is one of the key US states that functioned as a host for shell companies.

These obstacles aside, the urgency and importance of addressing corruption make it a very compelling issue for the administration. Crucially, it is not just—or even primarily—a foreign-policy issue, but rather a matter that ties together the domestic and global spheres. Sarah Chayes of the Carnegie Endowment for International Peace, one of the strongest voices on this topic, grounds her views about corruption not just in policy but also in governance and morality. She sees “a diverging between what regular, ordinary Americans understand to be corruption and a kind of elite obliviousness,” she told NPR. And when she wrote about the corruption that helped fatally undermine the government in Afghanistan, she asked the question: “What flourished on our watch? … A government system in which billionaires get to write the rules. Is that American democracy? Well …?”

This is a broader definition of corruption and probably a more important one in the longer term: a critique of power and justice as much as a question of money and payments. And it resonates on both sides of the American political divide. There is a feeling that the system is fixed—the game is rigged so most of us cannot win. The Pandora Papers tell us: that’s right, it is.

Putting these issues at the center of US foreign and domestic policy means acknowledging that our globalized world has brought big costs as well as big benefits. It means addressing the fact that the United States’ global relationships directly affect the welfare and interests of its citizens. Setting these issues on a moral foundation is important, as we come off several decades when economic globalization was seen as a categorical imperative and the consequences of that conviction were too often ignored—to the detriment of democracy.

Andrew Marshall is senior vice president for engagement at the Atlantic Council.

US anti-corruption crusade should focus on Europe’s east

By making the fight against corruption a key US foreign policy priority, President Biden can counter the Kremlin’s efforts to gain influence throughout Central and Eastern Europe via the exploitation of corruption.

Image: US President Joe Biden speaks to reporters as he departs for a trip to Wilmington, Delaware, on the South Lawn of the White House, in Washington on October 2, 2021. Photo by Al Drago/Reuters.