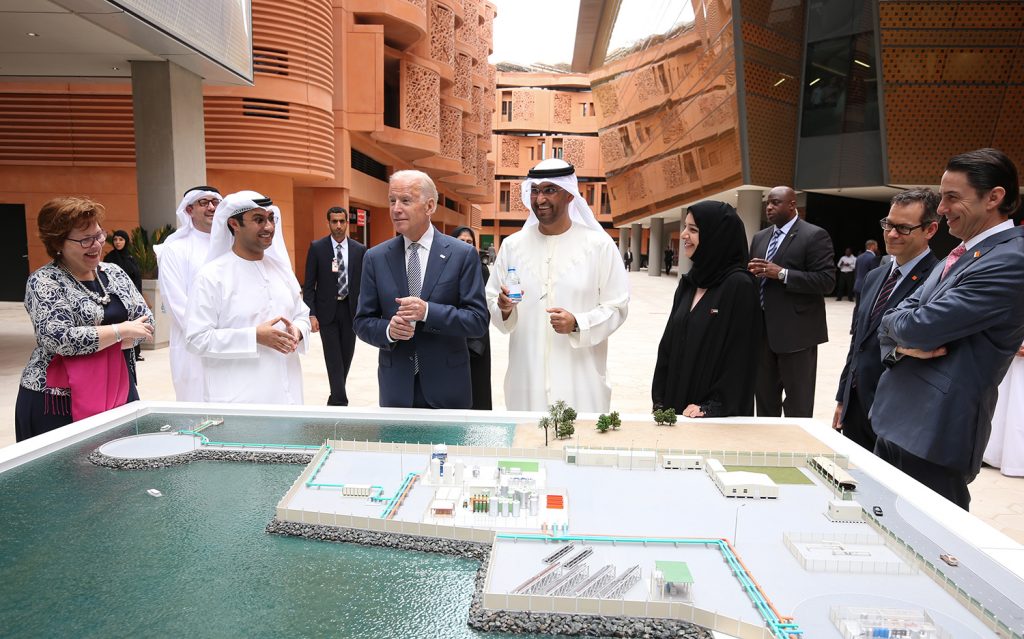 In March 2016, then-US Vice President Joe Biden visited Masdar City, a $20 billion planned metropolis rising southeast of Abu Dhabi that relies on solar energy and is designed to be a hub for clean-technology companies in the United Arab Emirates (UAE).

Nearly five years later, as Biden prepares to assume the presidency of the United States, his host for that visit, Dr. Sultan Al Jaber, expects the incoming US leader to embrace the urgent work of developing sustainable energy sources.

“I remember how engaging he was, and I remember also the types of questions he was asking,” Al Jaber said. “It is clear how much focus he intends to give climate change as part of his agenda.”

Al Jaber is the UAE’s minister of industry and advanced technology, and also his country’s special envoy for climate change. On January 19, he joined two other top Emirati officials for the first session of the Atlantic Council’s 2021 Global Energy Forum—held virtually for the first time. Also appearing on the panel were Suhail Al Mazrouei, the UAE minister of energy and infrastructure, and Musabbeh Al Kaabi, the CEO of UAE investments at the Mubadala Investment Company.

“Even as COVID-19 continues to wreak devastating public-health and economic consequences across the globe, entering 2021 we see the light at the end of the tunnel,” said Frederick Kempe, president and CEO of the Atlantic Council, in setting the scene for the discussion. “As governments look to rebuild their economies, the energy transition to cleaner and more sustainable energy sources has actually accelerated during this period of pandemic.”

The 2021 Global Energy Forum kicked off with conversations with top thought leaders on the future of energy.

The future of renewables relative to fossil fuels

“We have seen first-hand how smart investment and diversified energy mix can pay off,” said Al Jaber, who’s also the chief executive of the Abu Dhabi National Oil Company (ADNOC). “When we started Masdar fifteen years ago, solar and wind were high-cost, nascent energy sources. But today, they are very cost-competitive,” he said, noting that the world’s largest solar park in Abu Dhabi now produces electricity at a tariff of only 1.35 cents per kilowatt-hour—setting a new world record.

Al Jaber said his country’s geology has endowed the UAE with some of the world’s least carbon-intensive oil, and that new fuels such as hydrogen could be a “game-changer.” ADNOC already produces around 300,000 tons of hydrogen a year, he said, and the company is exploring the viability of markets in Asia and Europe. “As those markets progress and develop, we will build the business case that could position us—Abu Dhabi and the UAE—as a major player and a major supplier of blue hydrogen worldwide. It is very early days, though. But with the right regulatory framework, I believe there is significant potential in hydrogen energy.”

“Rather than being in conflict, I believe working across the energy mix has given me a deeper understanding of the entire energy system,” he added. “The world will still rely on oil and gas for many decades to come, so this industry can and must play an important role in transitioning to a lower-carbon future.”

Peak oil demand has not been reached yet

Al Mazrouei, who spoke with CNN’s emerging-markets editor John Defterios, said it’s difficult to predict the direction oil prices will go given the uncertainty of demand during the COVID-19 pandemic.

“It’s a very delicate matter. What happened in 2020 was extraordinary,” he said, predicting that a recovery will likely be well underway at the beginning of 2022, with world oil demand exceeding the ninety-six million barrels per day that OPEC predicted in its latest monthly monitoring report. That, he said, is because vaccinations are “catching up at a good pace” around the world, despite early skepticism.

There’s strong demand in “major economies like China and India. And we’re seeing that people in certain parts of the world are starting to go back to normal,” Al Mazrouei said. “That gives me some hope.”

The fact that Biden intends to rejoin the Paris climate accord could affect US oil production, he noted, in terms of possible restrictions on production. “All of that is going to be wait-and-see during the years 2021 and 2022.”

Looking further into the future, Al Mazrouei predicted that world demand for oil could reach 109 million barrels a day by 2040, surpassing its previous peak, despite efforts to diversify toward renewables.

“I think there is still room to grow beyond 100 million [barrels per day]. It depends on the alternatives, how convenient they are in getting to the market,” he said. “We’re talking about growth in the population. We’re talking about … many people who cannot afford electricity or a car [who] may do that in the next coming twenty years or so. All of those numbers are not knowns and they will drive demand in my view.”

Al Kaabi, whose Abu Dhabi-based Mubadala Investment Company manages $232 billion worth of assets, said the company will invest heavily in the development of hydrogen as an alternative fuel; last year, Mubadala joined the Brussels-based Hydrogen Council.

“We maintain our view that all sources of energy will be required” from now until 2050, said Al Kaabi, predicting that total world energy demand will double over the next thirty years. “We identified hydrogen as one emerging energy source that would definitely help in meeting energy demand in the future and addressing one key topic, which is climate change.”

Asked if Mubadala Petroleum plans to exit its oil operations in Southeast Asia—specifically Malaysia and Thailand—Al Kaabi said not necessarily.

“Natural gas is enjoying, relatively speaking, stronger growth than oil, at least until 2035 or 2040. And that’s the strategy currently. But it’s very important also to maintain a very low-cost production, because in the energy transition I think it’s very, very important that we remain profitable, resilient [in response to] whatever commodity prices we see going forward.”

Asked about the upcoming COP26 UN climate-change conference in Glasgow, Al Jaber said each region of the world requires a customized approach.

“Reducing carbon is something we can all agree is a common goal, but it should not undermine the ability of emerging economies to give their people a better future and to ensure progressive, stable economic growth,” he said. “For instance, Africa should not be forced to pay the price for the industrial revolution that helped mature economies get to the level of development they enjoy today. We need to create the right mechanism in terms of funding, energy mix, and broader economic development that strikes that right balance.”

Al Jaber pointed to several areas for potential US investment in the UAE, including manufacturing, biotech, healthcare, and agriculture. He said he would also like to see more collaboration on artificial intelligence and suggested that US institutions expand their cooperation with Abu Dhabi’s Mohamed Bin Zayed University of Artificial Intelligence, which encompasses research on machine learning and digitization.

He cited the Abraham Accords as a prime example of US-UAE partnership. “With US diplomatic support, we created a bridge between Israel and the Gulf countries,” he said, noting that the recent peace deal is already bearing fruit. “The US was instrumental in bringing peaceful nuclear energy to the UAE as part of the 1-2-3 agreement. As both our countries emerge from the pandemic, I believe there are great opportunities for collaboration across the energy sector.”