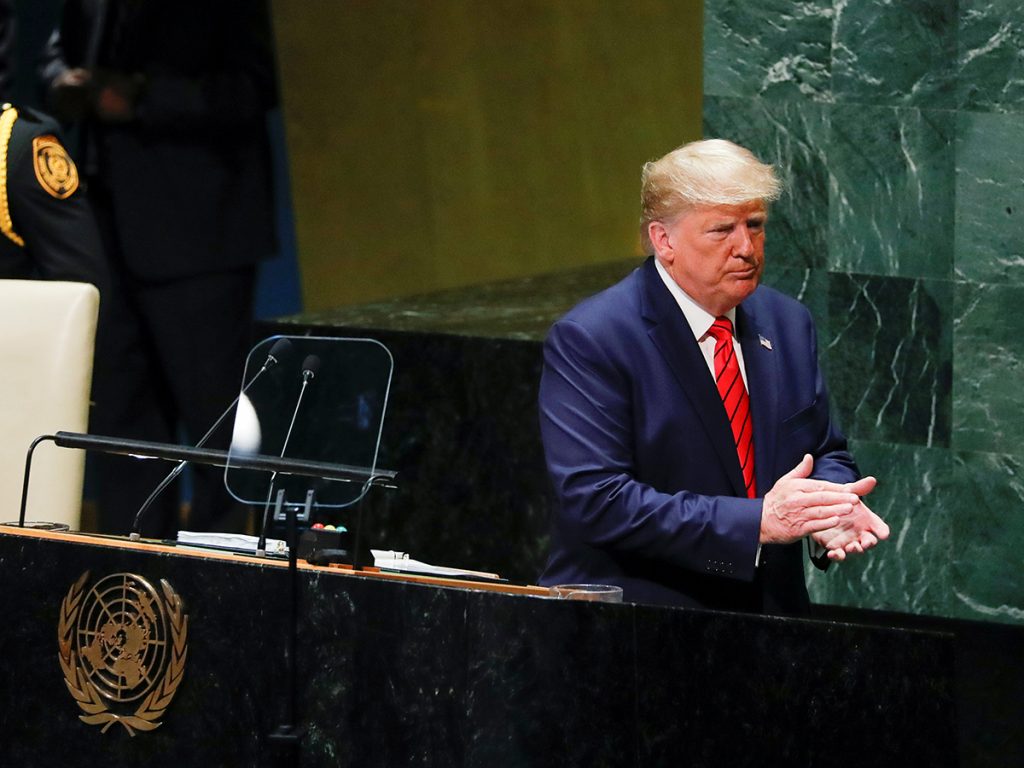 US President Donald J. Trump justified his vision for the United States’ role in the world during a wide-ranging speech to the United Nations General Assembly (UNGA) on September 24. In a speech that bore resemblance to his other two annual addresses to the gathering of world leaders, Trump again emphasized his belief that core national interests should matter more to political leaders than simply achieving more international cooperation. “The future does not belong to globalists,” the US president said. “The future belongs to patriots…[and] sovereign and independent nations.”

Trump argued that “the free world must embrace its national foundations” and “must not attempt to erase them or replace them,” echoing criticisms he has levelled against international organizations such as the United Nations and the World Trade Organization (WTO), which he believes unfairly disadvantages the United States and threatens its sovereignty. “Wise leaders put the good of their own people and their own country first,” he told UNGA.

Atlantic Council Weiser Family Distinguished Fellow Daniel Fried argued that Trump’s emphasis on sovereignty and description of patriotism as the converse of globalism was misguided, however. “Patriotism is at its best when inseparable from universal values,” Fried said. While “the universal without the particular of the nation risks becoming mere abstraction…patriotism that is not answerable before universal values risks degenerating into tribalism,” he argued.

Atlantic Council Distinguished Fellow Alexander Vershbow noted that Trump’s discussion of sovereignty importantly “made no reference to Russia or Ukraine.” Trump declared “if you want democracy, hold onto your sovereignty,” which Vershbow noted “is exactly what Ukraine has been trying to do in the face of Russian aggression,” since Moscow’s illegal annexation of Crimea in 2014 and continued military activity in eastern Ukraine, except “now with wavering support from Trump.”

In his nearly forty minute speech, Trump discussed most of the other major pillars of his foreign policy, including his effort to redo major trade deals with US partners and economic competitors such as China, US attempts to prevent Iran and North Korea from obtaining nuclear weapons, and the United States’ response to migration from Central America and the destabilizing situation in Venezuela.

Here is a look at the major topics he discussed, with reaction from Atlantic Council experts on what his words mean for future US foreign policy:

Iran and the Gulf

The September 14 drone attack on Saudi Arabian oil facilities—which US officials have blamed on Iran—has been the latest escalation in a growing showdown between Tehran and Washington in the Persian Gulf since this spring, when Iran announced that it would stop abiding by the terms of the 2015 Joint Comprehensive Plan of Action (JCPOA), which the Trump administration withdrew from in 2018.

Trump doubled down on his decision to leave the JCPOA during his September 24 speech saying that the deal had “very little time remaining, did not allow inspection of important sites, and did not cover ballistic missiles.” Trump decried Tehran as “the world’s number one state sponsor of terrorism” and accused the country of “fueling the tragic wars in Syria and Yemen.”

The United States has leveled several rounds of economic sanctions on Iran in response to its regional activity and an in attempt to get Tehran to renegotiate a deal on its nuclear deal. In response to the September 14 drone attack, US officials also unveiled new restrictions against the Central Bank of Iran on September 20.

Trump promised that unless Tehran changes its behavior “sanctions will not be lifted; they will be tightened.” He also called on other international leaders to refuse to do business with Tehran in response to its attack on Saudi Arabia. “All nations have a duty to act,” Trump said. “No responsible government should subsidize Iran’s bloodshed.”

“Trump’s language on Iran was characteristically harsh but he ended with an olive branch when he noted that ‘many of America’s closest friends today were once our greatest foes. The United States has never believed in permanent enemies. We want partners, not adversaries. America knows well that anyone can make war, only the most courageous can choose peace.”

“The chances for reconciliation between the Trump administration and the Islamic Republic have never been good and diminished significantly when Trump quit the nuclear deal, imposed a total embargo on Iranian oil exports, and Iran retaliated with an escalating series of attacks on US allies in the Persian Gulf. But Trump clearly doesn’t want a war with Iran and he remains open to some sort of negotiation. My fear is that he doesn’t have a clue how to get there. He has better prospects with North Korea for an incremental agreement that will improve on the current standoff; with Iran, the Iranian leadership has been clear that sanctions relief must precede new talks. The Iranians, sensing Trump’s growing political weakness, will likely hang tough until our 2020 elections.”

“US President Donald Trump’s comments do not stray from what he’s been saying all along about the multilateral nuclear agreement and Iran’s ‘malign behavior.’ Though Trump talks about the tightening of sanctions, he does not seem averse to the idea of meeting with the Iranians. Trump merely isn’t open to their pre-conditions—at least for the time being—which is the lifting of US sanctions prior to a potential meeting.”

Read more on the Crisis in the Gulf

Trump continued his push to reset the United States’ international economic relationships and took particular aim at China as both countries remain locked in negotiations on a potential new trade agreement.

The US president said that China has “declined to adopt promised reforms [and] has embraced an economic model dependent on massive market barriers, heavy state subsidies, currency manipulation, product dumping, forced technology transfers and the theft of intellectual property and also trade secrets on a grand scale.” While he reiterated that he wants to see a deal with Beijing to address these grievances, he also stated that he would “not accept a bad deal for the American people.”

Trump also argued that “the World Trade Organization needs drastic change,” especially on how the organization allows countries to self-declare as ‘developing’ in order to receive special treatment. Trump decried this provision which has allowed China, “the second-largest economy in the world…to declare itself a developing country to game the system at others’ expense.”

In addition to his harsh criticism of Beijing, Trump said that the United States is close to reaching a new agreement with Japan and that his administration hopes to work with the United Kingdom on a new free trade agreement once that country exits the European Union.

“It has been clear for some time that significant components of the Bretton Woods international economic and monetary system require reform and updating. President Trump is not wrong that China’s development model in many respects is inconsistent with foundational principles for the international monetary system. The United States is not alone—and has not been alone for quite some time—in pursuing alternative bilateral trade arrangements. However, it is also far from clear that the UNGA was an appropriate or effective forum for pursuing reform of the international economic and monetary system.”

“President Trump’s strong criticism of the Chinese economic model basically reiterates the key US demands in the eighteen-month long trade talks amid growing tension with China. This will make it difficult for the United States to agree to a minimal deal with China in the scheduled October meetings—any such agreement will be seen as inadequate by many US constituents having gone along with the administration’s hard line on China. His insistence that China stops being designated a developing country [at the WTO] resonates with Europe and Japan, and could form a basis for concerted actions in dealing with China. This would have been a more effective approach, but it’s not clear that President Trump sees it that way.”

The US president continued to denounce the illegitimate regime of Nicolás Maduro, while maintaining support for the Venezuelan people to take back control of their country. Venezuela has endured an economic and political collapse under Maduro, who was inaugurated for a second term after fraudulent elections in May 2018. Trump described Maduro as “a Cuban puppet protected by Cuban bodyguards” who has no legitimacy with the Venezuelan people. “To the Venezuelans trapped in this nightmare,” Trump said, “please know that all of America is united behind you.”

Trump described the increased migration from Central America into the United States as “one of our most critical challenges.” He explained that “the receiving countries are burdened with more migrants than they can responsibly accept, and the migrants themselves are exploited, assaulted, and abused.” Trump thanked Mexican President Andrés Manuel López Obrador “for the great cooperation we’re receiving and for right now putting 27,000 troops on our southern border.”

“Latin America rarely gets the amount of attention as it did on September 24 during the president’s annual UN address. As expected, President Trump rightfully used a good portion of his speech to condemn the human rights abuses committed by the Maduro regime and to call on other nations to recognize Juan Guaidó as interim president. Calling out the role of Cuba in propping up Maduro was right. But missing was the role played by China, Turkey, and especially Russia where President Vladimir Putin is welcoming Nicolás Maduro in Moscow on September 25. This week is pivotal for renewed global attention to resolving the Venezuela crisis.

“Congratulating Mexican President López Obrador for his cooperation on migration issues hopefully puts a stake in the ground in a new reset for US-Mexico relations. A strong US-Mexico relationship based on cooperation and mutual respect is fundamental for US interests and for advancing US policy in the rest of the hemisphere.”

“While Trump rightly highlighted the rampant human rights abuses committed by the Maduro regime in Venezuela, one glaring omission in his comments was the lack of any mention of the more than 4 million Venezuelan migrants who have had to flee to countries throughout the region due to the crisis in Venezuela and the millions more who are expected to flee unless the current crisis comes to an end.

“This is now a regional crisis with global ramifications and the president missed an opportunity to use this important platform at UNGA to highlight the need for collective action by the international community to address the largest humanitarian and migration crisis in the Western Hemisphere’s recent history, and the political crisis that is the root cause of the suffering of the Venezuelan people and threatens the stability of the region.

“Also missing from the president’s remarks was any mention of many critical global challenges that have captured the rest of the world’s attention, most notably climate change and the historic numbers of displaced people around the world. The president instead focused squarely on illegal immigration, and made no reference to the United States’ responsibility to share the burden of providing refuge to those fleeing oppression and violence around world, and seeking asylum in the United States.”

Rouhani’s plan a reason to be hopeful?

Rouhani’s proposal for peace will be rejected as outlandish, but it is a sign that Tehran may recognize that its attack on Abqaiq was an overstep.

Beijing strikes back with more US tariffs

The decision to increase tariffs “sends a message that China will match US tariff moves,” according to Hung Tran.