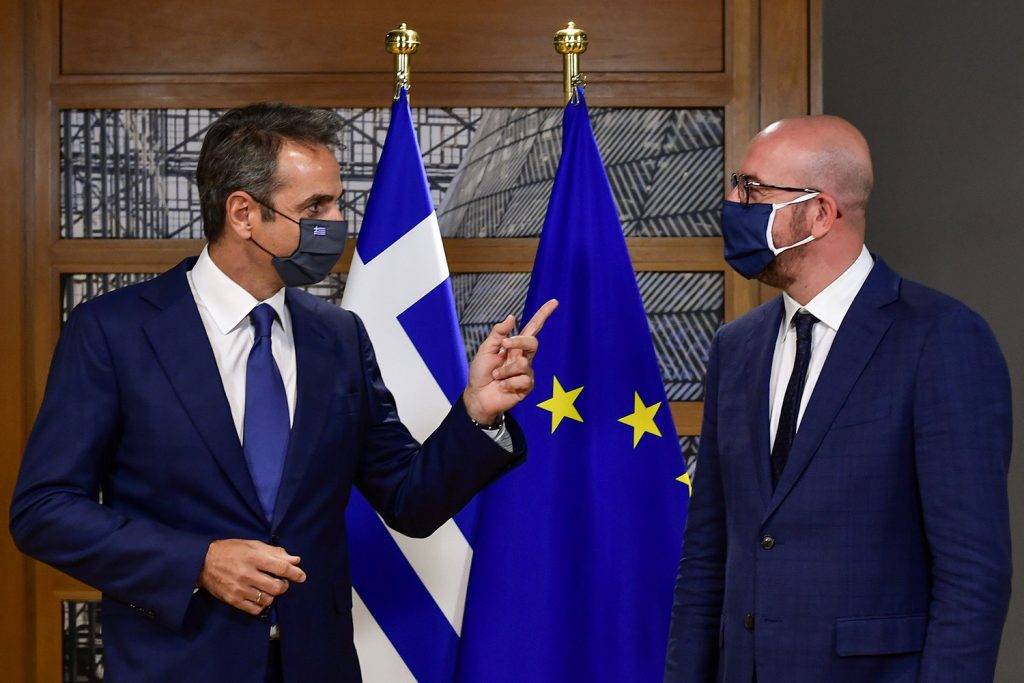 Turkish President Recep Tayyip Erdoğan is known for taking gambles when his back is against the political wall. As the coronavirus pandemic puts pressure on Turkey’s economy and society, Turkey’s summer deployment of research and naval ships to contest exclusive economic zones claimed by Greece and Cyprus under the United Nations Convention on the Law of the Sea (which Turkey never signed) fits neatly into the pattern. And while there was hope in recent weeks that diplomacy would prevail, Turkey announced on October 12 that it would redeploy the Oruc Reis research vessel back into contested waters.

These last few months have taught Athens some critical lessons about the way geopolitics are being played in 2020; other countries—particularly those situated on political fault lines of their own—would do well to heed these lessons as well.

While this summer’s Eastern Mediterranean stand-off has gripped the attention of those in the countries directly involved, the same cannot be said of the wider world. It’s easy to see why—a global pandemic is the perfect cover for a country to take bold action on an issue it believes matters more to it than to the broader international community (see China’s passage of the Hong Kong security law, which after a few days of headlines quickly faded into the background). In that respect, Ankara timed its latest round of EastMed activities perfectly, betting that the global response would be minimal. And it largely has been.

For all of Athens’ attempts to draw the United States more directly into the fray, including US Secretary of State Mike Pompeo’s trip to the region in late September, it has only achieved limited success thus far—according to the New York Times, the US Navy ship recently deployed to a joint US-Greek military base off of Crete “is not the kind of vessel that might intervene in a high-intensity conflict.” That makes sense; even if the US wasn’t a month away from an election and even if a Supreme Court seat weren’t suddenly up for grabs, a sizeable segment of the American electorate wants the United States to do less militarily on the world stage, and have for a while now. Failed and endless wars in Afghanistan and Iraq have made Americans skeptical of military adventurism, particularly when direct US interests aren’t directly involved.

In spite of the “America First” rhetoric and a US foreign policy that’s been blatantly more transactional under US President Donald Trump, this US retrenchment from the world stage actually began under his predecessor Barack Obama. That’s instructive; for all those predicting—or even just hoping—for a new foreign policy direction should former Vice President Joe Biden triumph over Trump on November 3, the United States is likely to continue avoiding fights where its interests aren’t directly concerned. The rhetoric may be more diplomatic, but the thrust—do less, not more—will have largely the same effect.

Even if the United States were to be more inclined to intervene in geopolitical fights outside its domain, Washington had even less incentive to pick sides in this particular conflict as both Greece and Turkey are NATO members, which is a bit ironic given that…

NATO remains the most potent security alliance in the world, at least on paper. But with the collapse of the Soviet Union, it suddenly found itself without a clear mission, and nearly thirty years later, it still hasn’t settled on one. NATO’s failure in meaningfully diffusing tensions between Greece and Turkey only highlights how the Alliance remains unable to respond to many twenty-first century geopolitical challenges. And worse is yet to come—in 2020, the biggest challenge facing the West is China, and not all NATO member states are on the same page when it comes to whether they should treat Beijing as an existential threat or an economic opportunity. That’s a divide that will only grow more pronounced as global economic inequality accelerates during the current pandemic, and countries will look for economic opportunities wherever they’re available. To its credit, NATO has attempted to play a mediating role between Greece and Turkey, but with limited success so far. Failure to meaningfully contribute to a peaceful resolution to this relatively small-scale clash in the East Med between its own members will be a missed opportunity for NATO to evolve itself into a more useful institution for the bigger geopolitical challenges that lay ahead.

So if NATO cannot act in these situations, what will take its place? Smaller, more targeted alliances with more modest, and specific, policy goals; more “minilateralism” compared to the multilateralism that largely defined the 20th century. Groupings like the recently established East Mediterranean Gas Forum between Greece, Egypt, Israel, Cyprus, Italy, Jordan, and the Palestinian Authority, which leads to…

Lesson #3: Embrace shifting geopolitical realities and lock them in

One of the most consequential geopolitical developments of 2020 that has been drowned out by the rest of this year’s chaos is the normalization of Israel-Bahrain-UAE relations, a diplomatic recognition of long-standing political realities on the ground. And while the holy grail of Israel-Saudi Arabia normalization is still far off, it underscores two critical things—Turkey (which criticized the announcement mightily) is increasingly at odds with the larger Arab powers, as they contend over issues in Qatar, Syria, Libya, and elsewhere. The second is that ideology and historical affinities matter a whole lot less in today’s world when there are immediate economic benefits to be realized. This is a lesson Greece has taken to heart as shown by its recent energy tie-ups with Israel—a country Greece did not even officially recognize or have full diplomatic relations with until 1990—as well as with Egypt more recently, a move that angered Ankara since it undercuts its claims in the Eastern Mediterranean.

Greece has leaned into this reality, as shown by its joining the East Mediterranean Gas Forum alongside the aforementioned countries. Is this an alliance that will be in lockstep on every issue? Of course not. But it will be in agreement on issues relating to Eastern Mediterranean energy and its orientation toward Turkey’s moves in this area. In a world that is increasingly complex and chaotic as ours currently is, these “minilateral” alliances may well be the best we can hope for. That’s especially true when witnessing the continued dysfunction at the EU-level of how to respond to Turkey. Which leads us to…

Lesson #4: The EU only has so many opportunities left

It feels like we say Europe is facing an existential dilemma every few years. The eurozone crisis. The refugee crisis. Brexit. The coronavirus pandemic. At each turn the EU has found a way to muddle through and keep the political union intact. But that doesn’t mean it can’t fall victim to a death by a thousand cuts. And the EastMed crisis is poised to be a particularly deep cut.

Greece has paid more than most when it comes to keeping its Euro membership, as its economy has been shrunk and its society upended by a decade of austerity politics. Greece didn’t undertake that hardship because it loves Brussels bureaucracy, or because slashing budgets is fun. It did it because Athens calculated that being a member of the European Union was worth the costs, hefty though they have been. And its relationship with Turkey played prominently in that calculation; Athens counts on its EU membership to rally Europe to its side.

Or so it thought. The last few months of muted military responses from fellow EU member states and feet dragging on Turkey sanctions have left plenty in Greece wondering whether EU membership is even worth it. But the EU has caught a break with the current Greek government—Greek Prime Minister Kyriakos Mitsotakis is a true believer in Europe and is as committed a Europhile as they come. That gives Europe—and Germany in particular—some leeway as they attempt to diffuse the EastMed situation.

The Merkel government knows better than most the political toll a flood of refugees can take on both domestic and intra-European politics; almost four million Syrian refugees are currently being housed in Turkey, not an insignificant stick for Ankara to wave around. Furthermore, Turkey is a major trade partner of the European Union (its fifth largest in fact, responsible for tens of billions in both goods and services trade), complicating the ability to take a strong line against Ankara.

Athens is well aware of these political realities. But they are also aware that they have a domestic Greek population that is openly questioning the utility of EU membership if Brussels won’t jump to the country’s aid when the Union’s own territorial boundaries are being challenged. It’s no secret that Europe has long had an identity crisis. But it’s one thing for a country to abandon the EU in search of a better future for itself (like the UK), and it’s another for a country to feel like the EU has abandoned it in its time of need. And just because there is a strongly pro-EU prime minister in office today is no guarantee that will always be the case.

The EU needs to tread carefully; it also needs to finally begin prioritizing what it means to be part of the European Union in 2020. Is it an economic community first and foremost? A security alliance? A diplomatic entity? Which of these identities take precedence when push comes to shove?

For years, the EU has tried to be all things to all member states, disappointing plenty along the way. While it is easy for Brussels to think the EastMed is just one more crisis where the needs of the European-many outweigh the needs of the Greek-few, Greeks do not have short memories when it comes to Turkish actions. Neither do Euroskeptics about the EU, both in Greece and elsewhere in Europe, who are on constant lookout for more proof that the benefits of EU membership fall well short of its continued costs.

Greece has learned plenty about the way the world works these last few months. We’re about to find out what Brussels has learned as well.

Leon Levy is a senior analyst in the global macro practice at Eurasia Group, the global political risk consulting and research firm, where he focuses on both regular coverage of global political trends and special projects the firm undertakes. Follow him on Twitter @leonmlevy.

Rather than being simply an effort to mediate among the parties in the Eastern Med, Pompeo’s trip has focused on the bilateral US-Greece relationship, on a strategic as well as a personal level