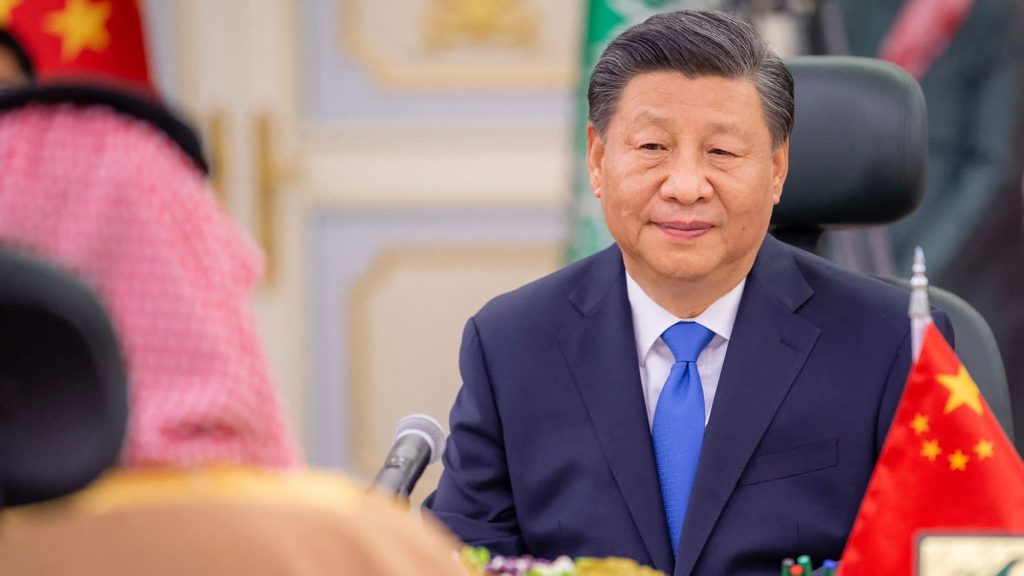 They rolled out the purple carpet. Chinese leader Xi Jinping traveled to Saudi Arabia this week for a series of summits with countries from around the Middle East, cementing over thirty energy and investment deals and basking in a good bit of pageantry courtesy of the host nation.

The warm visit contrasts with US President Joe Biden’s muted get-together with Saudi Crown Prince Mohammed bin Salman (MBS) this summer, which was followed by Saudi Arabia’s decision to cut oil production to Biden’s chagrin. It also presents an opportunity for Xi to get away from home amid rising concern around his zero-COVID policies, which the government is trying to delicately unwind amid street protests and dismal economic numbers.

We reached out to our experts on China and the Middle East to answer our burning questions about this visit and what’s coming next. This post will be updated as contributions roll in.

1. What does this summit mean for Saudi Arabia and China? Why are they engaging?

It’s natural to look at Xi’s trip to Saudi Arabia as a counterpoint to Biden’s trip there in July, but that misses the bigger and far more interesting picture. This is the fifth time a Chinese president has been to the Kingdom. With each trip—starting with Jiang Zemin in 1999—the bilateral relationship has gotten deeper and broader. The two countries have a wide range of interests in engaging with each other and that is more significant than a perceived slight to Washington. If it were simply a matter of the Saudis signaling their displeasure with the United States, then Washington could eventually get the relationship back on track and Riyadh would drop Beijing. That’s not going to happen.

China usually gets around 18 percent of its oil from the Kingdom. Trade between the two was worth over $80 billion in 2021, and Chinese companies have made more than $36 billion in contracting in Saudi Arabia since 2005. And Saudi Arabia’s role in global Islam makes it an important partner for China given the Chinese government’s many problems with its Muslim minority groups. From the Saudi side, China is the Kingdom’s number one trade partner, a major tech supplier, a long-term energy customer, and a comprehensive strategic partner with a permanent seat on the United Nations Security Council. The two countries have been intensifying their relationship throughout the last century, and this visit builds on that. It’s more than a reaction to perceived US missteps.

Xi’s visit to Saudi Arabia is significant, but also reflects the natural progression of the Sino-Saudi relationship. Saudi Arabia and China’s economic ties have been growing for many years, though they have largely been confined to the oil and petrochemicals sphere. Saudi Arabia had its eye on China since 1989, when Ali al-Naimi was the chief executive officer of Aramco. He believed that China would one day be a major market for Saudi crude oil. When he visited China to scout potential markets in 1989, however, he was unimpressed with its industrial development and decided to wait until he saw more cars on the road. In 1992, Aramco signed its first marketing agreement with China and started negotiations to open an oil refinery in China. It was not until 2003 that Saudi Arabia became China’s largest oil supplier, though in recent years that title has shifted between Russia and Saudi Arabia.

—Ellen R. Wald is a nonresident senior fellow with the Atlantic Council’s Global Energy Center and the author of Saudi, Inc.: The Arabian Kingdom’s Pursuit of Profit and Power.

2. Will this trip mark a change in the two countries’ economic relationship? What are the most important deliverables they are coming away with?

It is clear that energy is the spine of Sino-Saudi relations. Xi’s visit comes as China seeks to ensure its energy security amid the ongoing restructuring of global oil and gas markets due to Russia’s invasion of Ukraine and the Group of Seven price cap on Russian seaborne oil supply. Saudi Arabia is currently the number one oil supplier to China. Not only does maintaining this position multiply Saudi Arabia’s importance to China, but it also provides China with great bargaining power to keep the prices of its Russian oil imports at low levels. It is also not surprising to see that the two sides this week signed a memorandum of understanding on hydrogen, among numerous other agreements, as Beijing pushes to earn a reputation in the Middle East as a superpower in clean and sustainable energy technology.

This cooperation has geostrategic advantages for China too. The Saudi crown prince’s resistance to pressure from the Biden administration to increase crude output was music to China’s ears. Chinese leaders want to see more of that. The more influence China can exert on the Gulf Cooperation Council (GCC)’s energy sector, the more power it will have to blunt US hegemony in the Middle East.

The fact that China lends great importance to “harmonizing” the Belt and Road Initiative (BRI) and Saudi Vision 2030—a fact demonstrated by an agreement signed Thursday—undermines the theory that the BRI is less important in Beijing’s thinking. This does not mean the Sino-Saudi relationship is trouble-free. For example, the absence of China-GCC trade from discussions was telling. It reveals that, despite the mutual high trade volume, pageantry, and extensive public relations, the GCC countries are still hesitant regarding some aspects of their partnership with China.

—Ahmed Aboudouh is a nonresident fellow with the Atlantic Council’s Middle East Programs.

3. What are China’s interests in the Middle East right now? How were they advanced by this trip?

While GCC countries are hesitant about China, it would be wrong to conflate this tentativeness with any long-term trajectory in the China-GCC relationship. Many in Washington like to think that the relationship isn’t strategic in nature, but rather somewhat transactional. This rationale tends to deliberately underestimate the importance of cooperation between China and the GCC in economic, technological, and diplomatic fields—and how both sides may view that cooperation fifty years from now.

China is obsessed with geostrategic stability and security since they are levers of Beijing’s economic interests. This makes the Middle East one of the very few regions in the world where the interests and preferences of China and the United States converge. As far as China’s interests are concerned, there is only one insurance policy: the current US-led regional security system. China is interested not in challenging the status quo, but rather in investing in it. This makes China keen on free-riding on this system for as long as possible. But this could be a great source of vulnerability for China too. GCC oil exports to China are the very epitome of this peculiar bind. For example, China can control the oil shipments it purchases from the GCC. But it can’t guarantee that the shipments will safely reach Chinese ports in times of conflict, as Beijing has no control over the maritime shipping lanes in the Gulf and Indian Ocean, which are dominated by the US military.

—Ahmed Aboudouh is a nonresident fellow with the Atlantic Council’s Middle East Programs.

4. How will Xi’s visit affect the US relationship with Saudi Arabia given what has transpired since Biden’s trip over the summer?

Most Gulf countries recognize that their peace and security are dependent on their relationship with the United States, and they are fully cognizant that China is either unable or unwilling to take the United States’ place in the foreseeable future. At the same time, they are concerned about the White House’s lackluster response to a series of terror attacks by Iran’s proxies on critical energy infrastructure and civilian and financial centers. Tehran is now closer than ever to obtaining nuclear weapons, but the Biden administration is concerned with problems like political freedom and human rights. And, while many Gulf countries are immersed in their respective visions for a post-fossil-fuel future, such as Saudi Vision 2030, Washington is trying to limit their options with China and force them to pick a side in a fight that is not theirs.

Nonetheless, Xi’s visit this week demonstrated that Saudi Arabia and the region’s other countries are not without options, and they will continue to leverage their increased strategic importance for global stakeholders to gain the best of both worlds. As Saudi Foreign Minister Prince Faisal said this week, “we do not believe in polarization or choosing between one partner and another… The Kingdom’s economy is rapidly growing, and we need all partners.” Even in terms of security, while there is no absolute substitute for the United States’ integrated deterrence, China is already offering alternatives in advanced weapons systems at competitive prices.

Going forward, the United States must pay closer attention to the interests of countries in the region and must not become complacent in the face of China’s attempts to undermine regional alliances with Chinese solutions and Chinese wisdom.

—Tuvia Gering is a nonresident fellow in the Atlantic Council’s Global China Hub. 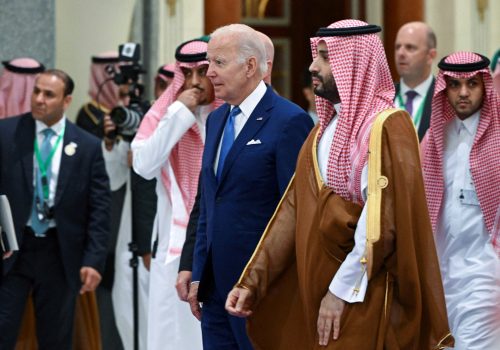 The OPEC+ decision to cut oil production creates momentum and encourages China to accelerate the exploitation of the multipolar moment rising in the Middle East. 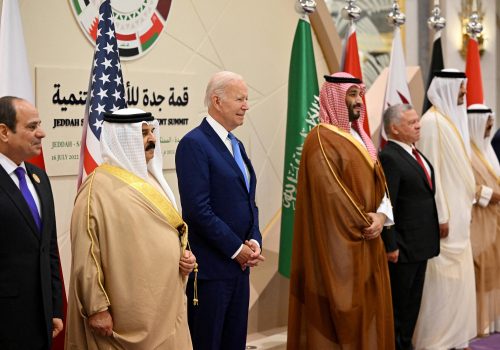 It’s time to salvage US-Saudi relations. And no, it’s not just because of oil.

The US-Saudi alliance is ninety years old and, while nations act in their perceived interests, a breach of this alliance has potential negative consequences for both sides and the region.