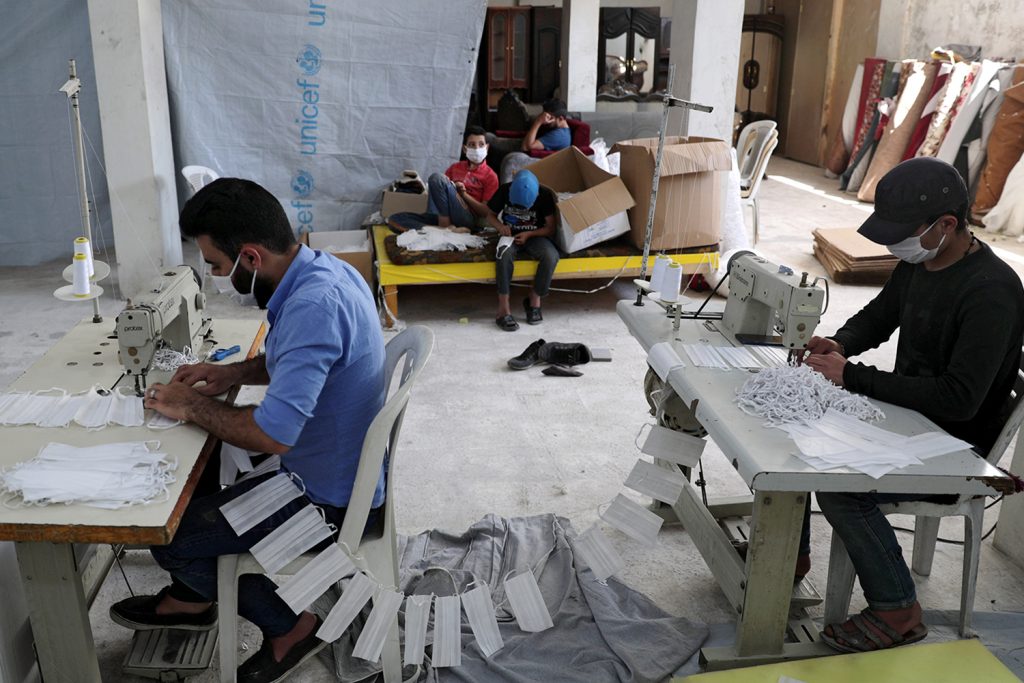 Even before the global novel coronavirus pandemic, the global environment for conflict resolution was a challenging endeavor. Violent conflicts across the Middle East and North Africa have drawn in both regional and global powers, leading to collapsed states, with millions displaced across this region.

With the virus has come the reshuffling of priorities needed to combat the pandemic, casting new light on these long-running conflicts. On May 20, 2020, the United Nations Under-Secretary General for Political and Peacebuilding Affairs Rosemary A. DiCarlo sat down with the Atlantic Council’s Future of Iran Initiative director Barbara Slavin to discuss potential new openings to advance peace in the region.

DiCarlo insisted that “we have a chance to go beyond recovery, we can safeguard the progress achieved over the last seventy-five years that have helped societies prevent, resolve, and rebuild from violent conflict,” adding that “we can also do better.”

In Yemen, a war that has ravaged the country since 2015 has decimated what was already a shattered health care system. With a population of nearly 30 million, of whom seventy-five percent require some form of humanitarian assistance, the pandemic has limited international relief teams’ access and reduced the number of essential staff throughout the country. “The humanitarian situation is one of the worst in the world, and Yemen simply cannot continue with the kind of escalation of violence and devastation that we have seen,” said DiCarlo.

On prospects for a peace deal in Yemen, between the Saudi Arabian-led coalition and Yemen’s armed Houthis, DiCarlo referenced the work of Special Envoy of the Secretary-General for Yemen Martin Griffiths and a unilateral ceasefire declaration by Saudi Arabia, asserting, “the Saudis are very committed to seeing a peaceful resolution to the conflict…They do understand that there is no military solution.”

DiCarlo also said that Iran, which has been arming Houthi rebels, “is now playing a constructive role regarding the Houthis.” When pressed for details, however, she declined to elaborate. “I think there is an understanding by a number of parties involved in this conflict [that] this is a time for negotiation and for finding a resolution to this conflict,” she said.

In Libya, a country engulfed by conflict for nearly a decade, the UN-backed government has pledged approximately $360 million in response to the pandemic. With a collapsed health system caused by the war, fighting was renewed in 2019 when General Khalifa Haftar ordered his soldiers to take control of the capital, Tripoli.

“Unfortunately, we see increased shipments of arms coming into the country that are given to both sides,” DiCarlo said. “The parties who are supporting their factions must understand the devastation they are creating, not only in Libya, but to the neighboring states.”

Turkey has been backing the government in Tripoli, while the United Arab Emirates and Russia have been supporting Haftar.

According to the IOM, some 200,000 Libyans are internally displaced inside the country and with many more hundreds of thousands of refugees. Known as the gatekeeper to Africa’s migrant crisis, up to 90 percent of refugees crossing the Mediterranean Sea to Europe depart from Libya, according to the UNHCR. As the conflict continues, the curfews and restrictions on movement in the face of the pandemic have added an extra challenge for the population of nearly 7 million people.

In Syria, a country devastated by a civil war that has led to millions of refugees fleeing across the globe and internally displaced with hundreds of thousands killed, the UN was quick to call for a nationwide cease-fire in order to curtail a COVID-19 disaster.

On humanitarian assistance in a given country, the UN can only deliver with the agreement of the host country. DiCarlo insisted that the UN decides where the assistance goes, but in the case of Syria, “we have seen over the years, that the government has restricted movements on the ground of lack of security,” she admitted.

In Syria’s besieged opposition-held regions, such as Idlib, where an approximate 3 million Syrians and another million foreigners are huddled in overcrowded refugee camps on the Turkish border, health services are extremely fragile. USG DiCarlo cited the current UN Security Council resolution that allows cross-border assistance from the north and into Idlib, and stressed the tremendous need to expand cross-border access. “We had one coming in from the northeast, which no longer exists because it was not reauthorized,” by the Security Council, she said.

On Iraq, where tensions between the United States and Iran have led to violent attacks and counterattacks, DiCarlo remained optimistic. “It is encouraging to see the support that Iran has displayed for the new Iraqi prime minister,” she said. However, DiCarlo maintained that there must be a mechanism for regional dialogue and communication, adding that “until we get this kind of mechanism, I think we will continue to see problems that could lead to miscalculations.”

In Afghanistan, where continued Taliban attacks threaten a tentative peace deal, DiCarlo said that the UN maintains its largest mission there, with a thousand people working on development and relief efforts. Encouraged by the recent formation of a unified Afghan government, DiCarlo was optimistic that the political process between the government in Kabul and the Taliban can move forward. She also confirmed that there was a recent meeting, digitally, of the Six Plus Two format, which groups Afghanistan with its neighbors and Russia and the United States. This has provided a rare venue for the Washington and Tehran to sit together, at least virtually.

On the broader question of where the UN has seen its biggest impacts in terms of conflict resolution in recent years, DiCarlo cited the preventive measures the UN has undertaken in African states, including Burkina Faso, Sudan, and the Sahel region. “Working with local communities, where tensions are often rooted, has been very productive and often do not take extensive resources and funding,” she said.

Masoud Mostajabi is an assistant director at the Atlantic Council’s Middle East Programs. Follow him on Twitter @MMostajabi1

Idlib ceasefire is holding and could open door to long-term Syria solution, US envoy says

The ceasefire negotiated between Russia and Turkey to halt fighting in the Syrian province of Idlib appears to be holding, US Special Representative for Syria Engagement and Special Envoy to the Global Coalition To Defeat ISIS Ambassador James F. Jeffrey said on April 30. “We have heard from many sources, even many Russian [ones], that there is a general feeling that this ceasefire is living up to expectations,” according to Jeffrey.

Gaza is unprepared for coronavirus: Providing aid could avert a security and economic catastrophe

Given Gaza’s isolation and the fact that almost two million people are cramped into such a small space—Gaza is one of the most densely populated areas on Earth—physical distancing, especially within refugee camps, is literally impossible. Though there has been a lot of forced ingenuity from Gazans—adapting existing materials to make sanitizers, facial masks and other personal protective equipment (PPE)—it is far from enough.

Image: Workers sew protective face masks at a factory during the outbreak of the coronavirus disease (COVID-19) as the closure of border crossings in northern Syria has negatively impacted business activities, in the rebel-held Idlib city, Syria May 11, 2020. Picture taken May 11, 2020. REUTERS/Khalil Ashawi