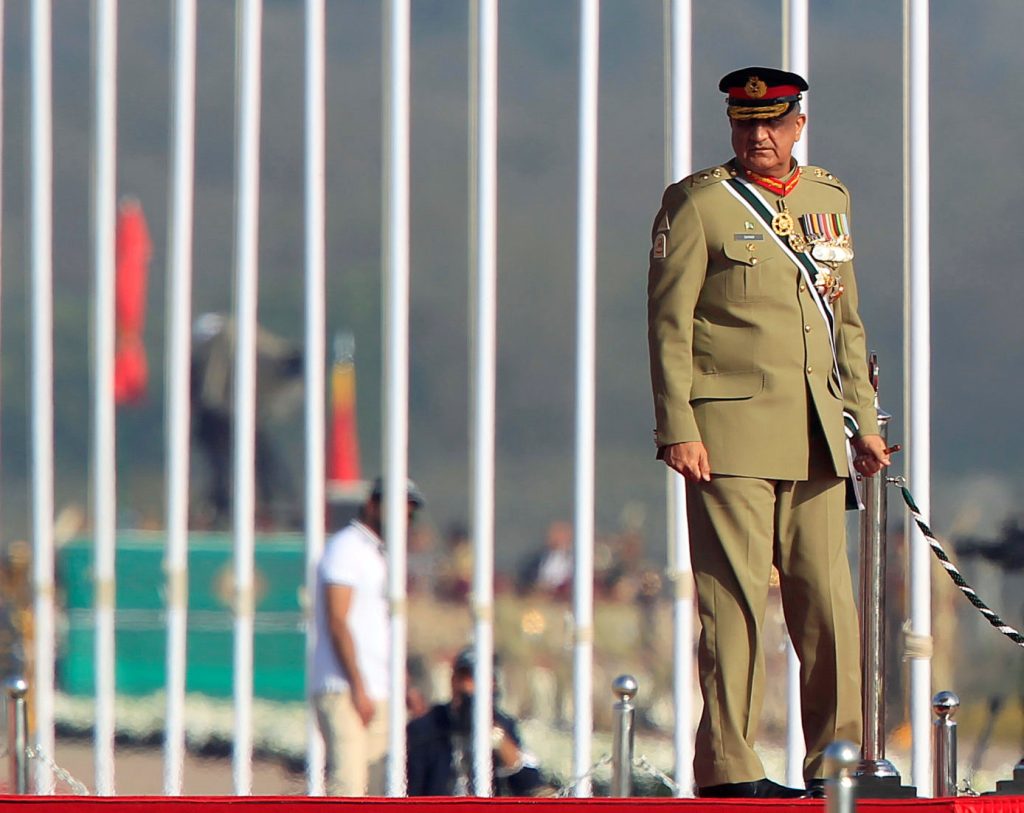 Pakistan’s relationship with its army has been extremely convoluted, especially considering the ongoing disagreements between the Pakistani government, the military, and former prime minister Imran Khan. With current Chief of Army Staff (COAS) General Qamar Javed Bajwa set to retire on November 29, 2022, the appointment of a new army chief prompts a new set of challenges, especially amidst an economic crisis and climate catastrophe.

South Asia Center and other experts provide their analyses of the situation:

Amb. Robin Raphel: A prime minister picking someone that will be beholden to him/her is a fool’s errand

Arifa Noor: Pakistan’s political instability and economic crisis make it difficult to predict what will follow the appointment of a new army chief

Mosharraf Zaidi: The new army chief will have three immediate challenges that his predecessors did not face: an image crisis, internal unhappiness, and temptation

The civil-military misalliance in Pakistan seems to be caught in a time warp. The current situation harkens back to the fraught 1990s when successive Pakistan Muslim League-Nawaz (PML-N) and Pakistan People’s Party (PPP) governments tried to select an all-powerful army chief who might remain close to or become beholden to the prime minister making the choice. Wishful thinking at best. Prime Minister Shehbaz Sharif presides today as the front man for a (former Pakistani prime minister) Nawaz Sharif cabinet. Whatever decision emanates from the elder Sharif in London, it won’t take much time before Rawalpindi and Islamabad veer away from each other. The army chief’s loyalty is to Pakistan and the half-million men and women he commands, not to an individual politician. Nawaz Sharif learned that the hard way for all his choices.

So, the best choice the prime minister can make is a professional without baggage, especially without links to the Inter-Services Intelligence that creates a different mindset from what the army needs currently. The army needs to shake off the group think, publicity consciousness, and intellectual stasis of a second six-year chief in a decade plus. The choice should also not be constrained by sectarian concerns or the need to keep the rampant opposition leader Imran Khan in check. There are fine military professionals in the running, mostly from Seventy-Fifth Pakistan Military Academy Long Course, commissioned in 1985. The best candidate may well be one who is not campaigning for the post.

Shuja Nawaz is a distinguished fellow at the Atlantic Council’s South Asia Center and author of The Battle for Pakistan: The Bitter US Friendship and a Tough Neighborhood. On Twitter: @shujanawaz.

My strong view is that no one should try to convince General Bajwa to stay on, which he probably does not want to do in any case, for reasons that are well known. Shehbaz Sharif would be wise to simply pick the most senior general to be chief of army Staff and be done with it. That way, no one could complain that he was trying to pick a favorite, and Imran Khan would have no basis to oppose the choice. The idea of a prime minister picking someone further down the list on the assumption that person will be beholden to him/her in the future is a fool’s errand. Army chiefs are loyal first and foremost to the institution of the army. Prime ministers who have assumed otherwise have come to grief, like Nawaz Sharif and his choice of General (and, former president) Pervez Musharraf. Of course, a chief chosen strictly on merit will still have political influence whether he wants to or not, because the system is such that other power centers will look to the army chief for guidance and support in times of political turmoil—a chronic reality in today’s Pakistan. In any case, the new chief should work to accelerate efforts to finally extricate the army from politics once and for all, and thicken the army’s skin against legitimate public criticism.

Ambassador Robin Raphel is a Senior Associate for the Project on Prosperity and Development at the Center for Strategic & International Studies.

Not since the last year of Pervez Musharraf as chief of army staff has the issue of the COAS’ appointment been this central to Pakistani politics and this controversial. And perhaps it can also be said the role of the military in Pakistani politics has also not been discussed and critiqued as much as this year. This is not just because of the political instability and the aggressive campaign by the Pakistan Tehreek-i-Insaf, but also because of the economic crisis. This is why it is so hard to predict what will follow once a new army chief is appointed by the end of this year; the past shows us that at such moments, the military opts for a less visible political role to allow the institution to shore up its image and legitimacy in Pakistani society. General Ashfaq Parvez Kayani steered a similar tactical retreat when he succeeded Musharraf. But, General Qamar Javed Bajwa’s successor may not have it this easy. For one, the prevalence of social media means a tactical retreat while continuing to exercise power from behind the scenes may not be enough this time around. Secondly, and more importantly, the economic crisis will require more. Will the new army chief be aware of the need for a more stable government which can take long-term decisions rather than continuing an unwieldy coalition which is making economic decisions with an eye on the coming election? And, along with this, the military may also have to acknowledge the growing unrest because of the high inflation and taxation and its link to the growing censure against the institution. These are the key issues the new army chief will have to address, one of which is publicly discussed in Pakistan, and the other rarely mentioned.

Arifa Noor is a journalist and anchor at Dawn News. On Twitter: @arifanoor72.

The new army chief will have three immediate challenges that his predecessors did not face: an image crisis, internal unhappiness, and temptation

In addition to the sobering burdens all Pakistani army chiefs must bear, the new chief will have three immediate challenges that his predecessors did not face.

The first is an image crisis. The current COAS General Qamar Bajwa is said to have engineered Khan’s removal—but in doing so helped unleash unprecedented invective against the military’s habitual political interventions. The new chief has to restore the army’s standing in the public discourse—in a profoundly different ecosystem than the one previous new chiefs have had to do.

The second is internal unhappiness. Military officers are drawn from the same demographic where Khan is most popular. Claims of a cessation of political intervention by the army will need to be backed with demonstrable proof. But anything short of a return to office from Imran Khan might leave many military women and men deeply dissatisfied. The new chief will have to balance the demands of his own officers with the requirements of a genuine withdrawal of the military from politics.

The third is temptation. General Bajwa has expanded the job description of the army chief massively. When Beijing or Riyadh or Brussels or Washington want something in Pakistan, they call the COAS. This was always a problem, but under Bajwa, it’s become the norm. To truly extract itself from what I call the Pakistani polycrisis, the new COAS will need to eschew undermining Pakistan’s elected officials and diplomats. Given the performance and track records of some of those officials, any COAS may genuinely feel compelled to continue stepping into areas that are not his domain. How the new COAS evades such compulsion and resists the temptation of trying to be diplomat in chief, economist in chief, and peacemaker in chief will go a long way to setting Pakistan back on a path of genuine economic, political, and security normalcy and growth.

Mosharraf Zaidi is a founding partner at Tabadlab and a senior advisor at Albright Stonebridge Group. Twitter: @mosharrafzaidi.

Conference on the future of the US-Pakistan relationship

In partnership with Engro Corporation, University of Lahore and Johns Hopkins University School of Advanced International Studies, the Atlantic Council’s South Asia Center hosts a conference on the future of the US-Pakistan relationship. This 2 day conference runs from October 31-November 1, 2022.

What Pakistan can learn from Chinese growth

As the China-Pakistan Economic Corridor enters its second phase, each side needs to review how they can improve the program’s effectiveness for mutual benefit.

State capacity and support for the Tehreek-i-Taliban Pakistan

Violent, criminal, and terrorist organizations’ functioning and success often rely on the support of the population in which they operate. Some scholars have hypothesized that to gain and maintain this vital support, violent organizations engage in the provision of goods and services.