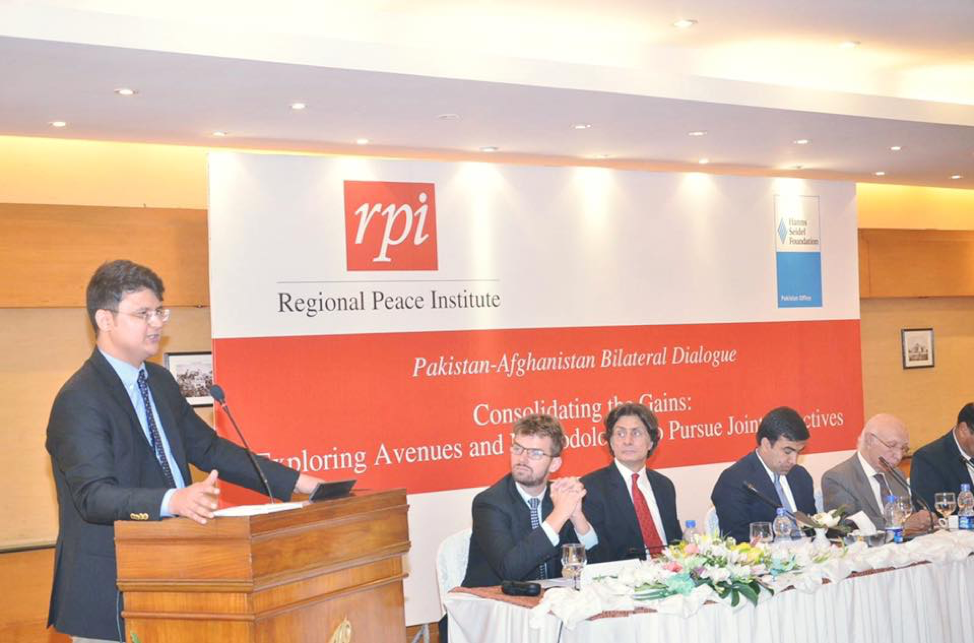 Afghanistan is caught between a rock and a hard place, trapped between a turbulent global and regional environment and uncertain domestic politics resulting from the departure of American troops. In this context, the Afghan foreign policy and national security establishment should declare Afghanistan as a neutral zone through the adoption of a neutral foreign policy. Opting out of the geopolitical rivalries of its neighbors and great powers would enable the country to pursue a meticulous, calculated, and diligent neutral foreign policy to become a center of international cooperation.

As a buffer zone and sphere of influence, with all the vulnerabilities that these designations imply, Afghanistan has limited choices in the conduct of its foreign policy. Regardless of the approach it takes — non-alignment, neutrality, multilateralism, or multi-alignment – the fact remains that Afghanistan cannot join alliances for or against any cause or state. Indeed, Afghanistan’s neighbors — Russia, China, and Iran — are all established or rising powers with fundamental internal problems and rivalries with the west and the United States. As a weak and fragile state, any miscalculation on the part of Afghan policymakers can easily draw the country into conflicts and proxy wars, particularly in the absence of the protective umbrella of a Great Power. This has played out clearly over the past decades as Afghanistan’s policy of alignment — with the Soviet Union during the Cold War and more recently with the United States — has proven to be destabilizing and has paved the way for Great Power competition on Afghan soil that has come at great cost to the Afghan people and to the country’s infrastructure.

The concept of neutrality triggers paradoxical feelings amongst the Afghan foreign policy and national security establishment. For some, neutrality is a nostalgic memory of past peace and tranquility under the former Afghan kings. For others, it is the memory of a dull, useless, and unproductive era, and the reason why Afghanistan never capitalized on its strategic geopolitical location to build up political stability and economic development. In other words, while for many Afghans neutrality is a dreaded concept, an equal, or perhaps, an even greater number, view it as a realistic way to keep Afghanistan out of the so called “tournament of shadows” or “The Great Game” and to keep proxy rivalries from playing out on Afghan soil.

Today, as the United States prepares to withdraw from Afghanistan, Afghan statesmen and policy makers need to rebalance and recalibrate its foreign policy posture and doctrine to the geopolitical realities and security landscape of a post-US era.

The historical debate on Afghan neutrality – Isolationism or buffer policy

The debate over Afghanistan’s neutrality is old and interconnected to its geography and history. Given its geographical location, the country has been considered many things over time: a sphere of influence, a collision point, a buffer zone, a corridor, a cul de sac, and a geopolitical compression zone. This geographical determinism has defined the identity and fate of Afghans for many centuries. Even the advent of globalization and information technology has done little to change this, and the fact remains that while this geographical identity can be both a liability and an asset, Afghans have always lacked a sufficiently self-reliant indigenous economy and functioning state able to regulate and organize its relations and society to maximum impact.

In defense of Afghan neutrality

Neutrality, in the most rudimentary form, means holding the middle ground and not taking sides in an active conflict or a passive rivalry between or amongst states whether via direct or indirect action and/or contribution. Over time, Afghan statesmen have pursued policies of neutrality ranging from isolationism to complete non-alignment.  In the Afghan context, it is important to distinguish between “neutralization,” i.e. permanent neutrality, and “neutralism,” i.e. military non-alignment. This status of neutralism should apply both during times of war and peace.

Historically, Afghan kings and rulers favored isolationism to keep Afghanistan out of the Great Power competition playing out around them. It was for this reason that the country was called the “hermit kingdom,” as the fiercely independent Afghans closed their borders to all but occasional few foreign visitors. This policy of isolationism insured domestic stability and kept foreign rivalries from playing out on Afghanistan’s soil — there is a famous saying within the foreign policy circles in Afghanistan that “when the world was at war we were at peace.” This referred to the fact that Afghanistan had its longest period of stability during the two world wars when the Great Powers were busy fighting each other instead of pursuing indirect and proxy warfare — it benefitted the country heavily in terms of economic development, connectivity, and commerce.

The strongest argument in defense of a neutral Afghanistan has always been the avoidance of Great Power politics playing out on Afghan soil. Indeed, Afghanistan has always posed a threat both to itself and others when it has been drawn too close to big powers, with many Afghan experts arguing that the country’s alliances in the past have always had tragic consequences, including the alliance with the British Raj, the alliance with the Soviets, and, more recently, the alliance with the United States. In contrast, the country has been most peaceful when it has served as a political buffer and economic corridor in the region and beyond.

There are at least four core arguments in favor of a neutral foreign and defense policy for Afghanistan:

A neutral Afghanistan could have a small security force meant for self-defense and for addressing internal security challenges, in addition to safeguarding territorial integrity and sovereignty.

In rejection of Afghan neutrality

The main argument against a policy of neutrality is Afghanistan’s underdevelopment and its victimization in foreign conflicts. Moreover, many policymakers and historians argue that years of neutrality brought no economic and financial gains to the country. They argue that, rather than being a force for peace and stability, neutrality was the main driver of the two successive revolutions in Afghanistan — leading to the fall of the monarchy and the first republic — which were driven by mass poverty and dissatisfaction among the population.

Detractors of neutrality also argue that it was a policy best fit for the eighteenth century, during which the “great game” between the Russian Czarist regime and the British Raj was playing out. Since the geopolitical landscape and technology in and around Afghanistan have changed significantly since then, it is believed that neutrality is no longer an applicable concept for Afghanistan.

Specifically, the arguments made against neutrality in Afghan foreign and security policy are:

In the absence of a well thought out and meticulously designed foreign policy, these arguments highlight the challenges of recalibrating Afghan foreign and security policy as a neutral state in the international system.

The decision on whether to pursue a policy of neutrality should follow a realistic assessment of Afghanistan’s position and vulnerabilities within the turbulent international system and regional environment. It should also be strictly limited to the security and foreign policy arenas.

Recently, peace plans proposed by both President Ashraf Ghani and US Special Envoy Zalmay Khalilzad have called for a neutral and non-aligned Afghanistan post-peace settlement. While these may be noble and even realistic calls for re-posturing Afghanistan’s foreign policy, implementation capacity remains unclear and there are no mechanisms in place to undertake such a policy.

Any framework for Afghan neutrality would be dependent upon a number of preconditions, including internal cohesion within the Afghan state, regional consensus on key issues related to non-interference in  Afghan affairs, a commitment by the permanent members of the UN Security Council to refrain from engaging in subversive power politics on Afghan soil, the dismantling of sanctuaries and support infrastructure in neighboring countries for warring parties, and finally, a regional development framework to help turn Afghanistan into a trade, energy, and transit hub.

Internally, the post peace settlement government of Afghanistan should assign a commission to assess the national security and foreign policy landscape of the country and draft a neutral foreign policy doctrine. This paper should be reviewed and approved by the Cabinet, Parliament, and a Loya Jirga, to become the main document outlining Afghan foreign policy.

Moreover, the Afghan institutions dealing with foreign policy and national security should be depoliticized, professionalized, and run by technocrats who could implement this important but extremely delicate foreign policy doctrine.

The need for safeguards to Afghan neutrality

The geopolitical realities and domestic politics of Afghanistan mean that any move towards making Afghanistan a neutral state will need to be backed by credible legal, political, and security guarantees and safeguards against foreign interference in Afghanistan affairs, including commitments that Afghan territory would not be used for proxy conflicts. These safeguards should be in the form of a regional and global treaty underwritten by the United Nations and co-signed by the five permanent members of the UN Security Council. Such a treaty would be monitored and open to third party verification, and would include predictable punishment tools for violators, including sanctions and blacklisting at global institutions such as the UN, World Bank, and IMF among others.

Specifically, this treaty should have three interlinked documents: a legally binding, good neighborly declaration by  Afghan’s neighbors stating that they will cease support for warring parties and dismantle infrastructure and sanctuaries that are used to wage war and export instability to Afghanistan; a UN Security Council Resolution calling on the permanent five states to refrain from any sort of power politics inside Afghanistan; and a UN General Assembly resolution recognizing Afghanistan as a neutral state.

In the absence of such a framework and legal-political safeguards, pursuing a neutral foreign policy for Afghanistan would be a fool’s paradise.

The future of the transatlantic partnership with Afghanistan

AN #ACFRONTPAGE EVENT – The exclusive launch of the Transatlantic Charter on Afghanistan as part of the Strategic Dialogues on and with Afghanistan, hosted by the Atlantic Council’s South Asia Center and the Rockefeller Brothers Fund.

Image: The author delivering a lecture on Heart of Asia (HoA) process at the Regional Peace Institute (RPI) in Islamabad in 2015 at the presence of former Pakistani National Security Advisor Sartaj Aziz and Afghan Ambassador to Pakistan Janan Mosazai.