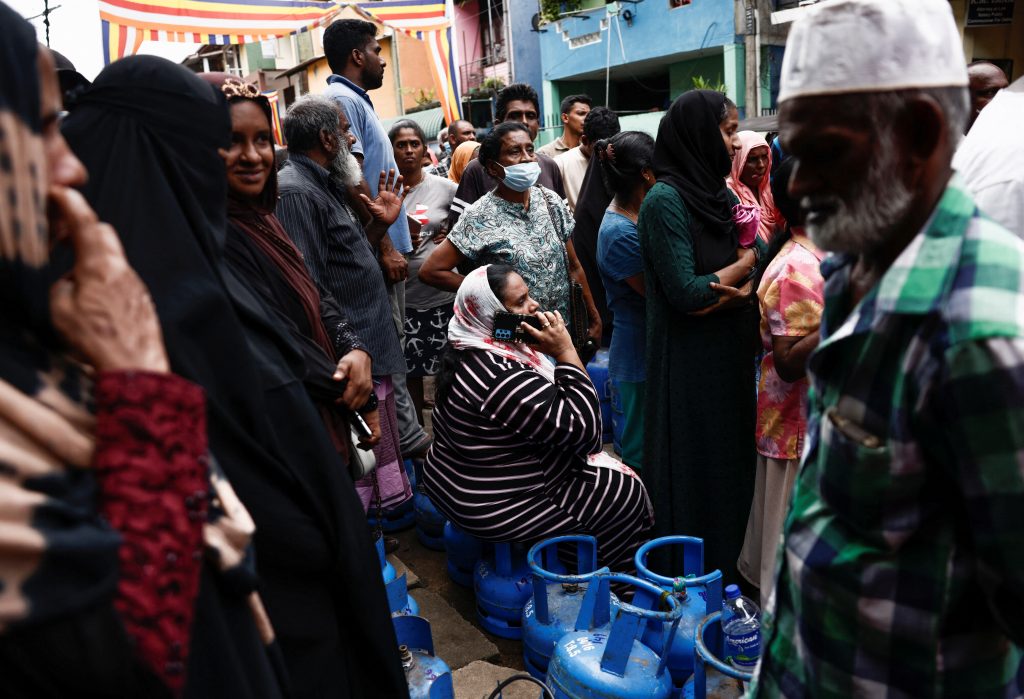 Sri Lanka is in the midst of its worst economic crisis since independence. Protests have been ongoing for over forty days as Sri Lankans are angry about 13-hour plus power cuts, food, and medicine shortages. The protests have already resulted in former prime minister Mahinda Rajapaksa stepping down from his post, and now, Ranil Wickremesinghe has been appointed prime minister for the sixth time. His task is to try to navigate Sri Lanka through this crisis, both by negotiating bilaterally with countries such as India, Japan, and China, as well as with the International Monetary Fund (IMF), where Sri Lanka is seeking financial assistance.

This crisis has been long in the making, as Sri Lanka consistently faces a “twin deficit problem” consisting of both a budget deficit and a current account deficit. In addition, successive Sri Lankan governments have failed to meaningfully implement structural reforms needed to make the country a competitive economy; exports of goods and services which were approximately 39 percent of gross domestic product (GDP) in 2000 have declined to about 20 percent of GDP. Additionally, Sri Lanka has also failed to insert itself into global supply chains.

Besides the twin deficit problem, Sri Lanka suffers from a debt problem. Beginning in 2007, Mahinda was president, and the Sri Lankan civil war was ending. At the time, Mahinda sought to invest in infrastructure, including a number of vanity projects, and turned to international investors to raise the necessary capital. Due to Sri Lanka’s political volatility, bond yields were extremely lucrative, and though he was able to raise the necessary capital and build the infrastructure, economic reforms were not implemented, and populist measures continued to drain the Sri Lankan exchequer. These bond repayments are one of the main reasons Sri Lanka had to approach the IMF for a program in 2016, as foreign exchange reserves were falling dangerously low.

The low foreign exchange reserves is also one of the reasons Sri Lanka leased 70 percent of Hambantota Port to China Merchants Port Holdings Company in 2017. This is commonly cited as an example of a Chinese debt trap, but in reality, Sri Lanka badly needed the foreign exchange reserves to service its other short-term foreign debt. Loans from China currently account for about 10 percent of Sri Lanka’s total debt, while international sovereign bonds comprise about 39 percent of Sri Lanka’s overall debt. Despite this, the government at the time did not focus on economic reforms, and instead lurched into a political crisis in 2018 which effectively doomed any chance of pursuing the badly needed reforms.

The political crisis combined with the 2019 Easter Bombing attacks further put pressure on Sri Lanka’s fiscal situation as tourism declined. Furthermore, soon after winning the presidential election, Gotabaya Rajapaksa implemented an income tax cut and a value added tax cut, despite being warned not to do so. According to the IMF, this decision cost Sri Lanka over 2 percent of GDP in lost revenue, and also caused the existing IMF program to be suspended, further putting pressure on the Sri Lankan economy. This was the first in a series of economic policy mistakes that explain how Sri Lanka wound up in its current state.

The second mistake came as a result of the 2019 tax cuts. In order to make up for lost revenue, the government borrowed heavily from the central bank and commercial banks, thus increasing the money supply as it sought to keep interest rates down while financing the deficit. Though this has long been a practice in Sri Lanka, from December 2019 until August 2021, Sri Lanka’s money supply increased by about 42 percent. This helped lead to foreign exchange shortages, as the increased money is spent by recipients on imports.

2020 was another shock to the Sri Lankan economy as the COVID-19 pandemic caused the island to close to tourists from April until November. Due to the strained fiscal situation, the government was not able to enact a meaningful stimulus, and opted not to negotiate with its creditors to obtain debt relief, which was the third mistake. At the time, Sri Lanka’s debt was considered to be unsustainable, which disqualified it from receiving a Rapid Finance Instrument from the IMF. To try to navigate the turbulence, the government obtained loans from China and negotiated currency swaps with Bangladesh, China and India to temporarily boost the foreign exchange reserves. These were all band-aids to a much larger problem.

2021 saw the fourth policy mistake of the Gotabaya presidency. In an effort to protect dwindling foreign exchange reserves, the government suddenly announced a ban on chemical fertilizers, part of a broader push to pursue import substitution. The fertilizer ban created a shortage throughout the country and, as a result, Sri Lanka’s tea industry came under significant pressure. Tea is Sri Lanka’s biggest export, and due to the fertilizer ban, crop yields were devastated. The loss of exports has been devastating for the economy, and the decline in paddy crop has helped to push food inflation even higher. Though the government eventually reversed this decision, the damage was done.

Entering 2022, the government still believed that it could muddle through and come out of the debt crisis intact, and after repaying a five hundred million dollar sovereign bond in January, members of the government boldly proclaimed that Sri Lanka had never defaulted, and it never would. Most investors though believed that Sri Lanka would not be able to pay the one billion dollar sovereign bond that was maturing in July. The Russian invasion of Ukraine firmly diminished any hopes Sri Lanka had of being able to make that repayment, as commodity prices spiked, and Sri Lanka simply did not have the money to pay for essentials. Though India stepped up and provided Sri Lanka with over three billion dollars of assistance in fuel, food, and medicine credits, this has not been enough. Sri Lankans face rolling blackouts of up to 13 hours, as well as a shortage of food and medicine.

The poor economic conditions have led Sri Lankans to take to the streets and demand that President Gotabaya Rajapaksa resign. The protests have been peaceful, except for when mobs affiliated with Prime Minister Mahinda Rajapaksa attacked the protestors, who retaliated by burning down the Rajapaksa’s ancestral home and attempting to storm the prime minister’s official residence. In a concession to the protestors, Mahinda resigned as prime minister, to make way for Wickremesinghe to take over as prime minister.

Wickremesinghe’s challenge now is to negotiate with bilateral creditors and the IMF to try to alleviate the fiscal situation. With the belated appointment of a legal and technical team to negotiate with creditors, negotiations with the IMF can continue. With Sri Lanka defaulting on its loans, the IMF is Sri Lanka’s principal lifeline as an agreement will unlock multilateral financing. However, in order to succeed with the IMF, Sri Lanka needs to present a plan to return its debt to a more sustainable level, which includes negotiating with creditors on restructuring the debt. The big question here though is whether or not China will be a constructive player in the talks; creditors are also watching to see if the Chinese government will take a haircut as well. Beijing has been reluctant to engage in debt restructuring talks, instead offering refinancing of existing loans. This is because of the fact that, if it agrees to debt restructuring with one country, that sets a precedent for other countries struggling under a similar debt burden.

It will take time for Sri Lanka’s economy to recover, and austerity is going to be a consistent theme for the foreseeable future. Protestors are not likely to give up their demand that Gotabaya resign as president, but the winds are shifting towards some form of political change, including diminishing the power of the executive presidency.

Sri Lanka is in for some tough times ahead.

Akhil Bery is the Director of South Asia Initiatives at the Asia Society Policy Institute, where his research focuses on the U.S.-India relationship and developments in South Asia more broadly.

#SriLankaDebrief – An economic and political crisis

Sri Lanka is currently facing an ongoing economic and foreign exchange crisis, as well as a political crisis driven by lack of adequate government management. To understand these developments, the South Asia Center hosted Amb. Robert Blake, former US Ambassador to Sri Lanka and the Maldives between 2006 and 2009, for a #SriLankaDebrief with non-resident senior fellow Dr Rudabeh Shahid.