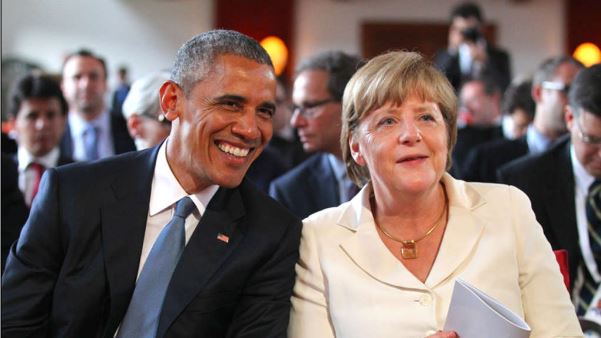 On April 25, US President Barack Obama will visit the Hannover Messe, the world’s largest industrial trade fair, where he will give a keynote speech with German Chancellor Angela Merkel.  The two are expected to promote transatlantic trade relations, particularly between Germany and the United States.

US Representatives Travel to Europe to Promote Transatlantic Trade Ties

President Barack Obama will travel to London on April 22 to hold a bilateral meeting and joint press conference with Prime Minister David Cameron, where the two are expected to discuss Brexit and TTIP negotiations. President Obama will then travel to Hannover, Germany, to attend the Hannover Messe (industrial trade fair) where he will give a keynote speech with German Chancellor Angela Merkel on transatlantic trade relations.

After a meeting of US President Obama, German Chancellor Merkel, and European Commission President Juncker on TTIP at the Hannover Trade Fair, USTR Michael Froman, Chair of INTA Committee Bernd Lange, and Commissioner Malmström will take stock of progress achieved so far and discuss the way forward in the negotiations. (ViEUws)

All of this is directly leading up to the next (13th) round of TTIP negotiations in New York starting on April 25. (The White House) (United States Trade Representative)

Do you like staying up to date on transatlantic trade issues? Have TTIP & Trade in Action emailed to you weekly!

Check out Hannover Messe’s interactive infographic about the future of integrated industries and manufacturing.

“We will aim to include ambitious anti-corruption provisions in our future bilateral trade agreements, starting with TTIP. The goal is to strengthen the fight against corruption pursued already through international conventions.” –  Cecilia Malmström

The UK based courier firm ParcelHero released a 30-page report analyzing the exact cost changes UK importers and exporters would face upon a Brexit, not to mention the decrease in value of stocks of import-export firms. Furthermore, being excluded from the potential TTIP deal would give EU member states a competitive advantage in trade with the United States, as the deal aims to eliminate tariffs. This loss of competitiveness would be aggravated by the lag time in finding new markets for British exports that will not be able to switch at the blink of an eye. (Forbes)

In an interview with Xinhua News, EU Commissioner for Agriculture and Rural Development, Phil Hogan, said that the there will be no lowering of EU standards and regulations on food production, farming, and the environment because of TTIP. Instead, Hogan insists that “The EU will remain a global standard maker in food production.” (Xinhua)

In a recent article for the French newspaper LeMonde, EU Trade Commissioner Cecilia Malmström responds to a critical article written by 60 members of the French Parliament who claim that TTIP negotiations are not transparent enough. In contrast, Commissioner Malmström points to the fact that every negotiating text that the Commission puts on the negotiating table is made public. She ends her article by directly addressing the MEPs of the French Parliament who have been so critical of TTIP negotiations: “You rightfully stated your willingness to be involved in the negotiations. I answer by an unwavering commitment to cooperate closely with you today and until we get a TTIP that is reasonable, balanced and mutually beneficial.” – Original Article in French (Le Monde)

German international broadcaster Deutsche Welle produced a video documenting the history of the US-German trade relationship. The two nations have been trading since the late 17th century when German immigrants first arrived in America, and German immigrants have founded some iconic American brands such as Levi’s jeans.  Despite a downturn in the first half of the 20th century, US-German trade has increased steadily since WWII and has culminated in the United States overtaking France as Germany’s largest trading partner in 2015. (Deutsche Welle)

Interview with USTR Mike Froman on TPP and TTIP

This week’s “Open Mic” on AgriPulse features US Trade Ambassador Michael Froman and Kevin Kester, a California beef producer and vice president of the National Cattlemen’s Beef Association. In this interview, Froman and Kester lay out what they say are the short- and long-term advantages of the TPP. Ambassador Froman talks about the effect TPP will have on China and potential consequences of failing to ratify the trade deal. Froman and Kester also preview the next round of TTIP negotiations later this month in New York. (AgriPulse)

In an interview with Marketplace, US Secretary of Commerce Penny Pritzker talked about an increase in competition and the effects of the TPP, implying that it is crucial for American economic growth. She said “The [TPP] is an agreement that addresses the fastest growing marketplace in the world – the Asia-Pacific region… This is a marketplace where our companies do not have equal access today. The [TPP] very much improves the opportunity for American business.” (Marketplace)

European Commission Vice President for Euro and Social Dialogue, Valdis Dombrovskis, spoke at theAtlantic Council where he called for more cooperation, integration and solidarity from both sides of the Atlantic to support continued economic growth. More specifically, Vice President Dombrovskis cited the need for Europe to revive investment back to the historic average of roughly 20% of GDP, and continuous structural reforms in the labor, energy, and digital markets. (Atlantic Council)

In this latest Brussels Briefing on Trade, Joanna Sopinska, Trade Editor for EU Trade Insights, provides an overview of the EU’s most pressing trade issues in the second half of April 2016. She highlights the first full round of talks on an EU-Tunisia DCFTA on 18 April, Commissioner Malmström’s meeting with the Parliament’s INTA Committee on April 21 to map out areas where there is still room for improvement in their bilateral cooperation, and the kick off of a new TTIP week on 24 April.

After a meeting of US President Obama, German Chancellor Merkel and European Commission President Juncker on TTIP at the Hannover Trade Fair, USTR Michael Froman, Chair of INTA Committee Bernd Lange,  and Commissioner Malmström will take stock of progress achieved so far and discuss the way forward in the negotiations. (ViEUws)

After the resignation of Lord Maude of Horsham, Mark Price was named the new UK Minister of State for Trade and Investment.  As the former Managing Director of Waitrose, a UK grocery store chain, the newly dubbed Lord Price understands imports, exports, and value chains.  Price supports the governments pro-EU stance and acknowledges that his job will be much tougher outside of the EU and TTIP. (The Telegraph)

UK Chancellor of the Exchequer, George Osborne, talked about a new report from the Treasury that projects the UK economy would be 6% smaller if it left the European Union than it would otherwise be  by 2030. Furthermore, the report projects that this would leave a £36bn hole in the UK  public finances. (BBC)

TTIP, CETA and Other Trade Agreements Creating Jobs and Growth in Europe – April 22, with EC Trade Commissioner Cecilia Malmström, hosted by the Aalto University School of Business in Helsinki, Finland –More Information
The End of Trade as We Know It? – May 5 & 6, hosted by George Washington University and The World Bank – More Information
The next round of TTIP negotiations have been scheduled for April 25 in New York – More Information
Stakeholders may make presentations to the chief negotiators in an  event open to the press – Register here
Registered stakeholders may attend a briefing with chief negotiators that is closed to the press –Register here
There will be a press conference at the conclusion of the event – Register here
Please send us suggested news stories, opinion pieces, publications, and upcoming events that you would like us to highlight!
Email [email protected] with your ideas and suggestions.
Central Europe Eastern Europe Economy & Business Europe & Eurasia European Union International Organizations Politics & Diplomacy Southern & Southeastern Europe Trade United States and Canada Western Europe