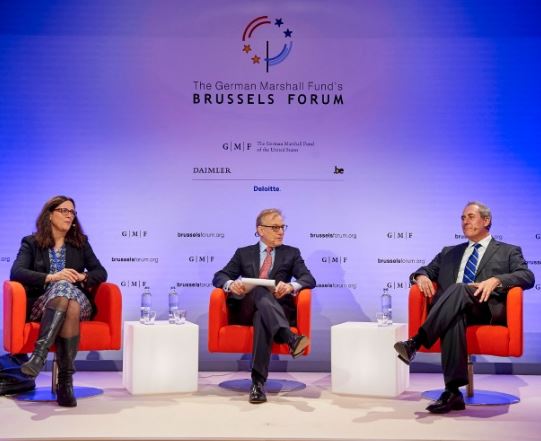 Do you like staying up-to-date on transatlantic trade issues? Want to have TTIP & TRADE in Action emailed to you weekly?

Make your tax-deductable donation to support TTIP & TRADE in Action

During their discussion at The German Marshall Fund’s “Brussels Forum”, Commissioner Malmström explained how chapters in TTIP are nearly impossible to be completed individually because of the inter-connectedness of the entire agreement, which contributes to the seeming lack of progress – when, in fact, much progress has been made. When asked about the probability of the United States to make a deal with the United Kingdom should a Brexit occur, Ambassador Froman made clear that the United States focuses on multi-national trade agreements, not individual bilateral agreements. In addition, he believes the United Kingdom has a greater voice when they are part of a larger union. (German Marshall Fund) –  Watch the whole discussion here.

“Regulatory cooperation with the United States has been on the agenda for many years and has produced good results in areas of common interest. Explanatory documents about this key aspect of the talks are available online.” – European Commission

The European Commission has published new texts and explanatory documents including proposals discussed during the latest round of TTIP negotiations in late February.  More specifically, the documents cover regulatory cooperation, geographical indication, customs and trade facilitation, good regulatory practices, trade in goods, delivery services, agriculture, and wine and spirits.  The Commission has also clarified that the final official TTIP document will be organized into 24 chapters, grouped into the three categories of Market Access, Regulatory Cooperation, and Rules. (European Commission)

At the German Marshall Fund’s annual Brussels Forum last week, European Trade Commissioner Cecilia Malmström explained the European Union’s long list of sensitive sectors from market openings in TTIP with the sheer fact that the European Union comprises 28 member states that all have their different sensitive areas. However, while the list put forward outnumbers the United States’ exceptions in quantity, Malmström stressed that the US exceptions are wider. She concludes “We still have more, but the difference is not as big as it can seem if you just hear the numbers.” (POLITICO)

As the 2 millionth South Carolina-made BMW was shipped out of Charleston, South Carolina last week, Manfred Erlacher, President of the BMW plant in South Carolina, came out strongly in favor of concluding TTIP, which he thinks is “the first step toward stimulation of strong economic growth in Europe, the U.S. and, particularly, in South Carolina.” Erlacher sees TTIP as a “win-win” for both sides of the Atlantic and is hopeful that the US government will ultimately make the right decision despite the predominantly negative rhetoric on trade during the presidential campaign. (The Post and Courier)

The Trans-Atlantic Business Council, in partnership with AmCham EU, released their annual transatlantic trade study this week. Despite continuing transatlantic economic turbulence, the United States and Europe remain each other’s most important markets: The transatlantic economy generates $5.5 trillion in total commercial sales a year and employs up to 15 million workers in mutually “on-shored” jobs on both sides of the Atlantic. The authors found that seven years after the 2008-9 financial crisis, the growth gap between the two sides of the transatlantic economy is narrowing, but gaps remain in trade, jobs, monetary policies and approaches to the digital economy.

Check out the statistics on the depth of the relationship and how liberalization can further benefit the transatlantic economy by reading the report! (Trans-Atlantic Business Council)

Germany and TTIP: The Great Fury

Jacob Schrot, writing for the Alliance for Responsible Commerce (ARC), dissects the odd phenomena of the opposition to TTIP in Germany- a country with arguably the most genuine interest in open international trade with its largest export destination- the United States. Schrot argues the agreement has been mis-branded to the German public as “game changer.”  Instead, it needs to be publicized that the agreement is essential to maintaining the status quo of a flourishing transatlantic economy and to help secure prosperity by expanding opportunities for small and medium-sized enterprises, and that those who rest fall behind. (ARC)

Next week, New Zealand Prime Minister John Key will visit Washington, DC to attend a final round of leaders talks on nuclear terrorism.  A major part of Key’s visit is to make his case for the TPP – he is scheduled to meet with senior members of Obama’s cabinet and to give a speech at the US Chamber of Commerce. Key said, “My message will be that the agreement is good for the US and the other 11 member countries… It will set a new standard for trade and investment in one of the fastest-growing and most dynamic regions, creating jobs and boosting incomes.” (Newshub)

Japan: Why the TPP Bill Will Pass the Diet

According to Markus Winter of the National Graduate Institute for Policy Studies, despite increasing clamoring against the TPP in the Japanese Diet, (particularly from representatives of agricultural constituencies) the bill is certain to pass in Japan.  In essence, the Diet members who will now start to put up a fight during the upcoming deliberations, have already agreed to the TPP in principle in a lengthy process before the Diet. (The Diplomat)

Reality Check for the Global Economy

In this brand new policy brief, a group of scholars of the Peterson Institute for International Economics came together to provide a reality check for the global economy. They set out what is known, both about macroeconomic dynamics and policy capabilities, in a context where distrust of both mainstream economic analysis and policymakers’ credibility has become excessive. They conclude that the global economic fundamentals today are not so grim, though there is room for improvement in key areas including China, the United States, European banks, Brazil and Latin America, oil markets, global trade, and monetary policy options. (Peterson Institute for International Economics)

During President Obama’s official visit to Argentina, the first visit by a US President in nearly two decades, US Ambassador to Argentina Noah Mamet and Argentina’s Minister of Foreign Affairs Susana Malcorra signed a bilateral Trade and Investment Framework Agreement (TIFA) today.  The agreement demonstrates the interest of both governments in advancing bilateral trade and investment ties and in working together in the spirit of friendship and cooperation. (Office of the United States Trade Representative)

The European Commission hosted a conference in Brussels to collect stakeholders’ opinions on the possible action of the Commission regarding the provisions of the Accession Protocol to the WTO of China. Commissioner Malmström gave the opening remarks for the conference and outlined three distinct options for Commission to take: change nothing and continue calculating Chinese dumping as is, change the method of calculation and remove China from the list of non-market economies, or change the method and accompany with other legislation to ensure the accurate capture of Chinese market distortions in the future. (European Commission)

Earlier this week, Commissioner Malmström gave a speech at the International School of Economics in Tbilisi, Georgia to discuss the current state of implementation of the Deep and Comprehensive Free Trade Area (DCFTA). In the roughly 18 months since the start of the implementation, the EU’s imports of Georgian products has risen by 15%, and Georgia has tackled specific reforms. Malmström noted that the European Union is excited by reform progress and further integration with Georgia, and has increased planned bilateral grant assistance. (European Commission)