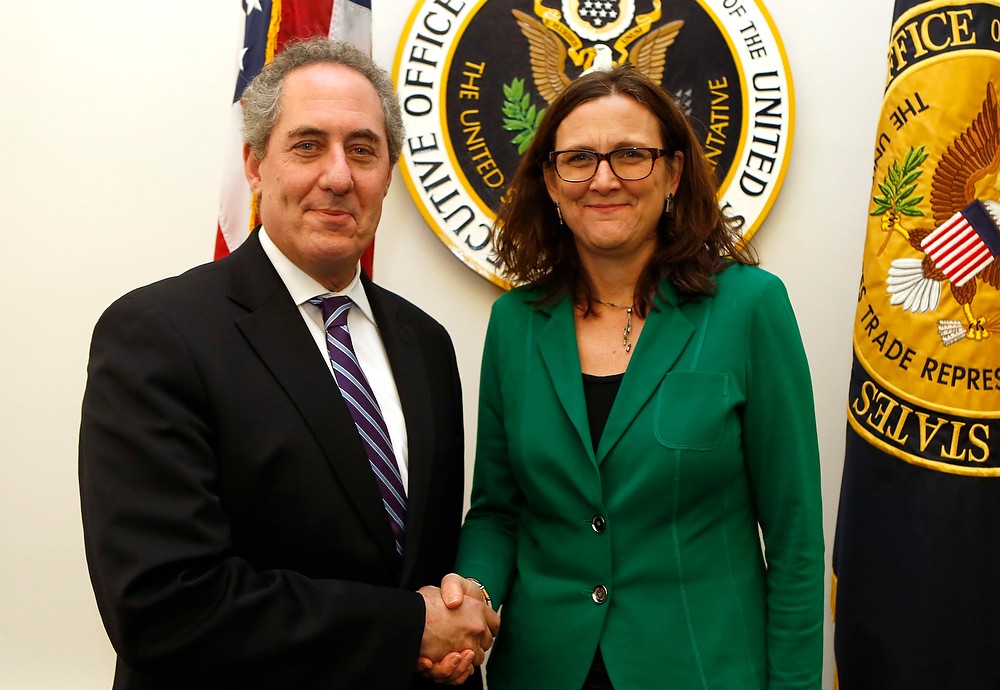 This week Cecilia Malmström is visiting Washington, DC to “talk TTIP” with key US policymakers as well as engage with the US public.  On Friday, 9 March, she will meet with US Trade Representative Michael Froman to discuss the current status of negotiations. Picture Source: European Delegation to the United States.

Do you like staying up-to-date on transatlantic trade issues? Want to have TTIP&TRADEinAction emailed to you weekly?

Trade on the White House’s Menu
For the remainder of this week, Washington will host key policy makers from both the European Union and Canada, namely European Commissioner for Trade Cecilia Malmström and Canadian Prime Minister Justin Trudeau.

Commissioner Malmström’s agenda includes meetings with FDA Commissioner Robert Califf and Deputy Commissioner Stephen Ostroff; with AFL-CIO (US Unions) President Trumka; with Senators Orrin Hatch & Ron Wyden; with Adewale Adeyemo, Deputy National Security Advisor; and with  US Trade Representative Michael Froman to discuss the current state of TTIP negotiations. Commissioner Malmström  will also deliver a speech at the Peterson Institute on ‘EU Trade priorities in 2016′ and join a round table discussion on TTIP at the US Chamber of Commerce.

Prime Minister Trudeau will meet with President Obama and US Trade Representative Mike Froman, and is likely to discuss the replacement to ISDS in the CETA agreement and raising the de minimis level for Canadian – US shipments. (Politico & EU Delegation to the United States)

To listen to Commissioner Malmström’s speech at the Peterson Institute, find the webcast here. 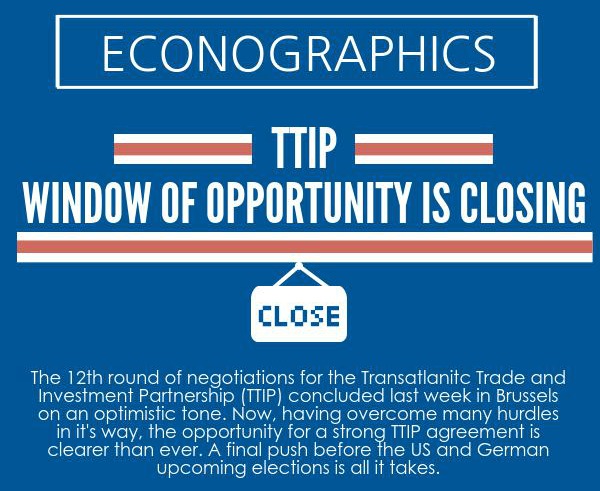 This week’s EconoGraphic, published by the Atlantic Council’s Global Business & Economics program, shows the timeline of TTIP and looks at future events influencing the window’s of opportunity for the conclusion of TTIP negotiations.(Atlantic Council)

Deputy Prime Minister and Development Minister of Poland, Mateusz Morawiecki, spoke at the American Chamber of Commerce in Poland earlier this week stating “We are in favor of signing this agreement, because the flow of goods, increasing the duty-free zone to include the US market… would give us a further impetus for development.”  He voiced some concern about provisions affecting the chemical industry and ISDS in TTIP, but showed overall support for the conclusion of a deal.  (Radio Poland)

France Sees the EU-Canada Agreement as a ‘Template’ for TTIP

After the European Commission announced on February 29 that it has agreed with the Canadian government to amend the investment protection clause in CETA, Euractiv France reports that Paris would like to “copy-paste” key passages from the EU-Canada free trade agreement, particularly those relating to the arbitration court. Minister of State for Foreign Trade Matthias Fekl welcomed the fact that the French proposal for “an international investment court” was largely included in CETA but insists that “When we say we see CETA as a template, we are not only referring to the mechanisms related to investment, but also to everything else – public markets, services and regulatory convergence.” (Euractiv)

Move Ahead with TTIP

Andrea Montanino, Director of the Atlantic Council’s Global Business & Economics program, and Ambassador E. Anthony Wayne, a Nonresident Senior Fellow of the program, write about the importance of TTIP as it presents an ideal opportunity at a time when both Europe and the United States are looking for ways to spur economic growth and employment. From bolstering the $5.5 trillion in annual trade and $4.8 trillion in FDI, to sending a message to Russia about the strength of the transatlantic relationship, to showing China that market-based rules are the way forward, there are many good reasons to conclude TTIP this year. The authors urge the negotiators to press ahead with vigor to meet their deadline of an agreement in 2016. (Atlantic Council)

Hans von der Burchard writes for Politico about Cecilia Malmström’s trade agenda gaining momentum. As an example, he puts forward her success in getting an agreement with Canada on investment protection: Ratification of CETA was first bogged down over concerns about the ISDS provision in the deal. Commissioner Malmström suggested an alternative court proposal, which to date both Vietnam and Canada have accepted in their respective trade deals with the European Union. The author suggests that the European Union is now in a potentially stronger position to negotiate deals around the world, including TTIP. (Politico)

Danish Ambassador to the United States Lars Gert Lose and President and CEO of the Confederation of Danish Industry, Karsten Dybvad, explain why Denmark is among the strongest TTIP supporters in the European Union. Although the reduction of already low tariffs will be marginal, the opening of markets through regulation harmonization will be huge for the export-oriented small nation that is growing already strong business ties to the United States. In addition, the importance of geostrategic and geo-economic aspects of the potential deal in promoting liberal, democratic ideals cannot be understated. (The Hill)

BritishAmerican Business released the case study report ‘Four Sectors, Many Stories, One Ambition: Leading UK industries make the case for TTIP’, exploring the benefits of TTIP from the perspective of UK businesses.  The study uses examples from businesses ranging in size from SMEs to large corporations from a variety of sectors.  The report concludes that TTIP is about making sensible upgrades to strengthen the relationship that the United Kingdom and the United States share and about ensuring that they remain the closest of trading partners. (BritishAmerican Business)

Three Things to Watch as the Transatlantic Trade Talks Accelerate

Senior Editor for the US Chamber of Commerce, J.D. Harrison writes that there are a number of important questions in TTIP negotiations that have yet to be answered. More specifically, the author elaborates on the questions: Can negotiators thread the needle on regulatory cooperation? How do the two sides come together on investment protection? What would a “Brexit” mean for the trade talks? (US Chamber of Commerce)

Japanese Prime Minister Shinzo Abe’s cabinet has approved a set of bills to enact the TPP and hopes to have it ratified in the current Diet (legislative body) session.  Given that at least six countries that account for 85% of the 12 TPP nations’ combined gross domestic production must ratify the deal for it to be implemented, Japan and the United States are necessary participants.  The goal for Abe’s administration is to foster public understanding and build momentum for other countries debating ratification. (Japan Times)

Remarks by Ambassador Michael Froman to the Economic Club of Minnesota

US Trade Representative Michael Froman received the 2016 Bill Frenzel Champion of Free Trade Awardfrom the Economic Club of Minnesota earlier this week. Upon receiving the award, Ambassador Froman pointed out the potential benefits for Minnesota in specific and for the United States in general. However, he stresses that the negotiation of a trade agreement is only the first step and that it’s implementation, the monitoring, and the enforcement are equally important. Froman concludes by saying, “Ultimately the question Congress will face this year: Cut more than 18,000 taxes on Made-in-America exports or cost every American household $700? Shape globalization or be shaped by it? Lead on trade or be led?” (Office of the United States Trade Representative)

This article of the Financial Times argues that regulation has not kept pace with the growth of cross border services. During the first phase of globalization in the ’90’s and 2000’s, growth in goods trade doubled global GDP growth.  However, the benefits of digitalization have not had the same effect on services and investment as they did on manufacturing and agriculture. The main reason for this are the complex regulatory frameworks governing services and financial trade, which national governments are hesitant to change. Both TPP and TTIP address this issue by attempting to harmonize global services law to facilitate trade. (Financial Times)

Last week EC Trade Commissioner Cecilia Malmström traveled to Thailand to meet with her counterparts from the Association of Southeast Asian Nations (ASEAN) to restart region-to-region trade talks. Besides China, the European Union is the second largest trade partner of ASEAN nations and the largest source of investment.  Although bi-lateral trade agreements are already in place, the ASEAN Economic Community has been created and the European Union is interested in an agreement in the future. (European Commission)

For the First Time in 40 Years: US is Germany’s Most Important Trading Partner

For the last four decades, France has been Germany’s largest trading partner, and since 1961 was the largest recipient of German exports.  However, this year America and Germany traded 173.2 billion euros, surpassing the 170.1 billion euros traded between Germany and France.  The growing economic relationship between Germany and the United States is, at least partially influenced, by a weak Euro and growing German exports to a strong US economy. (Spiegel) – Original article in German

EU Trade Priorities in 2016 – March 10, hosted by the Peterson Institute for International Economics– with EC Trade Commissioner Cecilia Malmström, in Washington, DC – Watch the webcast here
Interdisciplinary Conference on the Transatlantic Trade and Investment Partnership – March 14 and 15, hosted by the Centre for European Research at the University of Gothenburg, with EC Trade Commissioner Cecilia Malmström, in Gothenburg, Sweden – More Information
10th Annual Executive Briefing ‘The Transatlantic Economy’ – March 22, hosted by the American Business Forum on Europe, with Senior Fellow at the SAIS Center for Transatlantic, Joseph P. Quinlan, in New York – More Information
This website or its third-party tools use cookies, which are necessary for its functioning and required to achieve the purposes illustrated in the cookie policy.