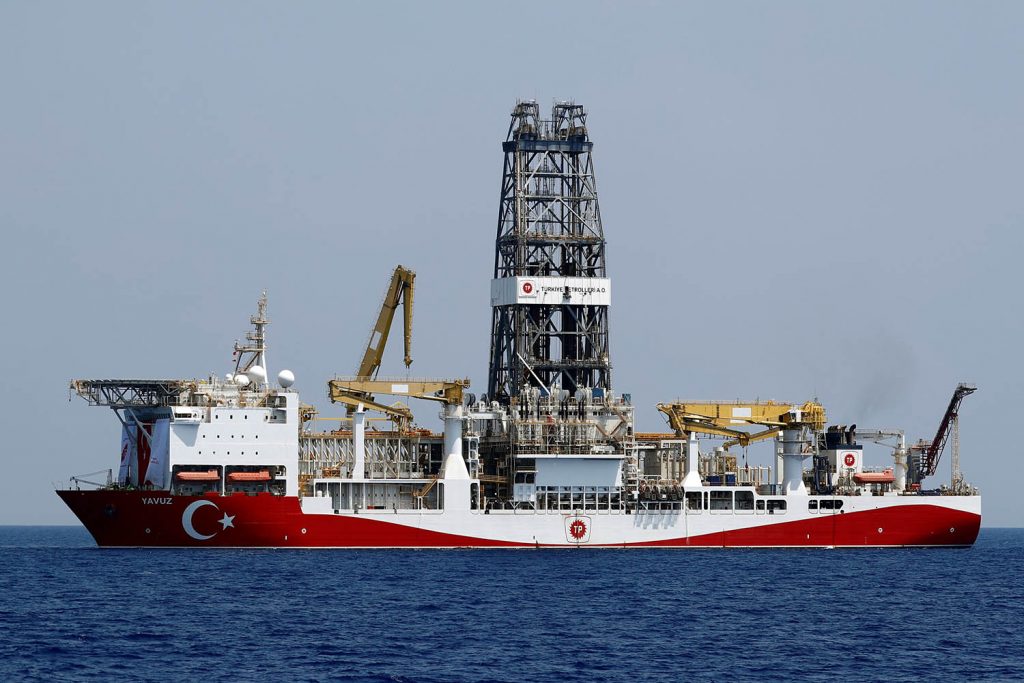 The long-simmering competition in the Eastern Mediterranean has entered a new phase, as newly signed delimitation agreements, promises of off-shore drilling work, high-pitched political statements, and increasing military exercises have raised the temperature between NATO allies. While both Turkey and Greece—the two major actors in this drama—are currently acting in a controlled manner to pursue their goals in this region, this is kind of uncompromising diplomacy can result in escalation and conflict very quickly, especially in an environment where historical grievances continue to dominate public discourse. As a case in point, the recent US decision to lift the military embargo against the Republic of Cyprus has caused extreme concern in Ankara and could raise tensions to an even higher level.

Currently both sides have already declared their ‘maximalist’ positions about their rights in the Eastern Mediterranean to the international community, especially the United Nations, and clearly expressed their objections to the position of the other side. Instead of engaging in constructive talks or behind-the-scenes bargaining, both parties have maintained their harsh rhetoric. There seems to be a desire to teach the other side a lesson, rather than a genuine push to find solutions through dialogue. Adding in the ineffective and sometimes inflammatory approach of potential mediators in the EU and the United States, and the issue becomes even more worrying.

Turkey and Greece’s arguments over territorial sea and air disputes is not new. Although there were some hopeful developments after the 1999 earthquake, bilateral political negotiations have always been inconclusive. The latest round of tensions was triggered by the discovery of new natural gas deposits in the Eastern Mediterranean, in 2015. The find, the largest natural gas discovery ever made in the Mediterranean, raised the stakes in the Eastern Mediterranean energy game and the involvement of energy companies brought European actors, especially France and Italy into the equation.

In response, new energy agreements signed by Cyprus, Israel, and Egypt for the liquefied natural gas (LNG) project, military alliance agreements that supported these, and the new Eastern Mediterranean Gas Forum, left Turkey feeling excluded and threatened by the new regional groupings. This compounded other regional developments that made Ankara feel isolated. Turkey’s relations with Israel deteriorated, links with Egypt were severed, relations with Syria and Iraq were reduced to the fight against terrorism, all while high-profile disagreements soured relations with the EU and United States.

The developing energy alliances in the Eastern Mediterranean also threatened to upend Turkey’s energy policy, whose primary goal has been to maintain Turkey’s position as an energy hub between the east-west and north-south corridors. Turkey’s belief that there was no alternative to the Turkish route in transporting Eastern Mediterranean gas by pipeline to the European market was suddenly shattered.

It is with this context that Turkey’s 2019 diplomatic and legal moves with Libya should be viewed. Ankara believes that with these agreements, Turkey’s Eastern Mediterranean border expanded westward and the country brought its grievances over its maritime area toward the top of the international agenda. The question is how much this visibility and activity has actually helped bring resolution to the Eastern Mediterranean disputes.

Frustration by the Greek side to the Turkey-Libya agreement seems to have quickly transformed into more concrete action. Greece has utilized European solidarity to bring the issue to the EU agenda. Although Ankara claims that France is using Greece as a springboard to pursue Paris’ own objectives in the region, the EU’s actions clearly meet Athens’ wishes, at least in the short term.

Throughout July and August, both parties have taken steps to increase tensions rather than relieve them. Turkey’s Navtex declaration to Greece on July 21 and its deployment of eighteen warships, which led to a reciprocal Greek warship mobilization, further escalated the situation. German mediation ended with a declaration from Cairo on August 6 that Greece and Egypt had signed an Exclusive Economic Zone Agreement. Turkey continues to conduct exploration activities in a wide area in the Eastern Mediterranean from the west to the east. Turkey maintains that these activities are justified as a country whose Mediterranean coast is longer than the US-Mexico border and argues that any action taken in the Eastern Mediterranean without consulting Turkey and without taking into account the rights and interests of Turkey and the Turkish Cypriot community would be ethically and legally invalid.

The failure of diplomatic initiatives to date increases the possibility that the escalating tensions will turn into a conflict. Despite their insistence on the justification of their actions, the most rational course for Greece and Turkey is to pursue compromise rather than conflict. Ankara should also take a page from Greece’s book and attempt to bolster its own diplomatic front on this issue. Through its maritime agreement with Libya, Turkey managed to attract international attention to its interests and concerns in the Eastern Mediterranean. However, to enter open conflict over disputed sea regions will erase that advantage. Now is the time to follow up the gains realized by Turkey both through military means in Libya and diplomacy in the Eastern Mediterranean or else the situation will develop in a way Turkey does not want.

Current efforts to use punishments to coerce Turkey is unlikely to cause any actual change in Ankara’s current stance. The EU lost its leverage over Turkey long ago. Nevertheless, Germany’s ascension to the rotating presidency of the Council of the European Union should be considered as a positive development for improving the EU’s constructive role in the conflict. Germany’s call for direct talks between Greece and Turkey to de-escalate tensions and resolve disputes over maritime rights in the Eastern Mediterranean is in line with the Turkish approach. The current Turkish strategy is based on pushing Greece to the negotiation table and avoiding any clash.

If Greece and Turkey want to negotiate, the time is now and could soon be gone. The parties need to get together and should restart navy commanders or defense ministers’ joint meetings to strengthen confidence building measures. A rehabilitated relationship can make the energy resources of the Eastern Mediterranean a positive development for everyone. Success lies in diplomacy, not conflict.

Mitat Çelikpala is professor of international relations and vice rector at Kadir Has University in Istanbul. Follow him on twitter at @MCelikpala.

Turkey’s strong support for Prime Minister Fayez al-Sarraj’s UN-recognized administration, however, may have at least spared the country from falling into the wrong sphere of influence. But getting to a lasting peace in Libya will require the constructive involvement of all the actors who have a stake in Libya’s future.

Oktay stressed that the world has changed dramatically since the onset of the pandemic, and will provide opportunities and challenges that all world leaders should be careful not to ignore.