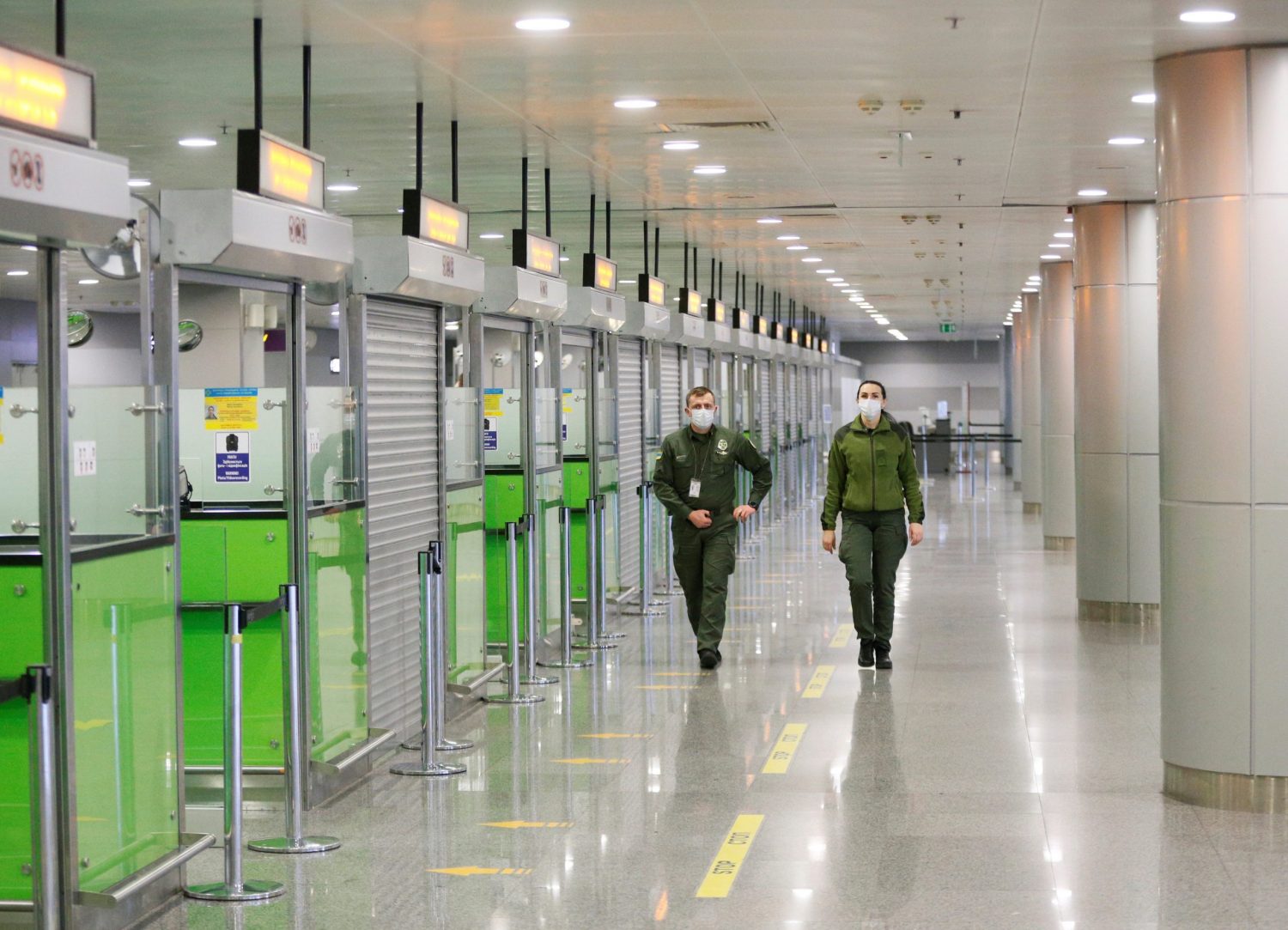 Officers of the Ukrainian Border Guard Service in the empty arrivals area of Boryspil International Airport after Ukraine suspended all passenger flights to and from the country, amid coronavirus concerns. March 17, 2020. REUTERS/Valentyn Ogirenko

We are now officially in the midst of a global financial crisis unleashed by the coronavirus pandemic, and Ukraine risks becoming one of the principal victims. On March 4, Ukrainian President Volodymyr Zelenskyy sacked his government, surprising most with his claim that it had done nothing good. With this act, he undermined the reform momentum of the past six years. His sacking of Prosecutor General Ruslan Ryaboshapka the next day was widely seen as a further attack on efforts to establish rule of law and property rights in Ukraine.

Until that very day, global financial markets had taken a benign view of Ukraine. During the previous year, the yield on Ukraine’s long Eurobonds had plunged from 10 percent a year to 4 percent a year, cutting the country’s borrowing costs and giving Ukraine full access to international credits. But Zelenskyy’s theatrics eliminated his international credibility. Today, Ukraine’s long Eurobond yields have skyrocketed to 14 percent a year. Neither Ukraine’s government nor its enterprises can borrow on the private market any longer. It is true that all economies have been hit hard by the unfolding crisis, and emerging economies far more so than developed economies, but Ukraine went from being favored to particularly exposed virtually overnight.

Added to this are the direct effects of the Ukrainian economy’s partial lock down in response to the coronavirus pandemic. These unprecedented measures are presumably correct, but the costs to the economy are nevertheless huge. Dragon Capital has assessed these costs at a 4-9 percent decline in GDP in 2020, which sounds realistic. Still, this is much less than the output contraction of 15 percent in 2009 and 17 percent in 2014-15.

In contrast with the financial crises of 2008 and 2014, Ukraine’s public finances are in pretty good order. Last year, inflation slumped from 10 percent a year to the current rate of 2.4 percent. The budget deficit has been kept at just over 2 percent of GDP for a number of years. The shortfall in customs revenues that so upset the president is actually tiny and, as customs chief Maxim Nefyodov explained, caused by declining imports and the hryvnia exchange rate.

However, in a financial crisis like the one currently underway, external finance is critical. First of all, Ukraine’s international currency reserves need to be sufficient. They are currently at over USD 24 billion, equal to more than four months of imports, even if they have shrunk by USD 2 billion in the last two weeks. The National Bank of Ukraine now needs to conserve its reserves. The best way of doing so is to let the exchange rate float, as is fortunately the case. The hryvnia has already depreciated by 15 percent from UAH 23.5/USD 1 at the beginning of the year to UAH 27.8/USD 1. President Zelenskyy no longer has any reason to complain about an overvalued currency, but the hryvnia may fall too much.

Ukraine’s current account balance has also improved, and the small deficit has been more than covered by remittances. Dragon Capital expects a decline in exports of USD 10 billion, which is small in comparison with the slump of USD 30 billion in 2014-15 or USD 28 billion in 2009, while Ukraine is set to gain about USD 5 billion because of lower energy prices.

Ukraine’s critical problem is its large needs for international refinancing. Dragon Capital estimates fiscal funding needs will rise to USD 13.5 billion in 2020, and it assesses that the government will require USD 4-7 billion in foreign funding by the end of this year to bridge its financing gap. When all international financing is frozen, the IMF and other official creditors are the only viable source of financing.

For the Ukrainian government and parliament, the situation should be crystal clear. Ukraine’s financial situation is comparatively decent thanks to five years of excellent macroeconomic policy. These policies must be maintained. The new Ukrainian leadership arrived at a laid table and benefited from a great capital of confidence, but it managed to blow most of it in two days and get locked out of the international financial markets.

Today, the Ukrainian authorities face two tasks, to restore international credibility and to regain access to international finance. Fortunately, they can kill two birds with one stone, namely through a new IMF agreement. There is no other realistic choice. The IMF offers both the seal of approval and access to the international financial market. Forget sheikhs from the Persian Gulf or Russian oligarchs! Ukraine’s president, government, and parliament need to understand that an IMF agreement is the only viable option.

What needs to be done? First of all, the Ukrainian authorities must not further undermine reforms. This means not interfering in the independence of the National Bank. It means not undermining any anti-corruption endeavors or weakening the corporate governance of state-owned companies. It means adopting a land market law and a law prohibiting the reprivatization of nationalized banks.

Last December, the IMF committed to a new three-year stabilization agreement entailing USD 5.5 billion of financing. This offer is still on the table, but Ukraine must carry out two required prior actions, namely pass the bank law and land market reform. Today, the IMF is offering more financing for countries in severe crisis due to coronavirus. Ukraine can and should raise its request to some USD 10 billion from the IMF, as the excellent economic analyst Timothy Ash has suggested.

All the relevant Ukrainian authorities need to realize that they had better conclude a long-term agreement with the IMF right now. The basic conditions are clear and long since agreed. If parliament does not adopt the relevant laws urgently, everything is likely to fall apart in an aggravated crisis, and the Ukrainian nation will suffer far more than necessary. This is the huge responsibility currently facing President Zelenskyy, his government, and his parliamentary majority.

Anders Åslund is a senior fellow at the Atlantic Council and the author of “Russia’s Crony Capitalism: The Path from Market Economy to Kleptocracy.”