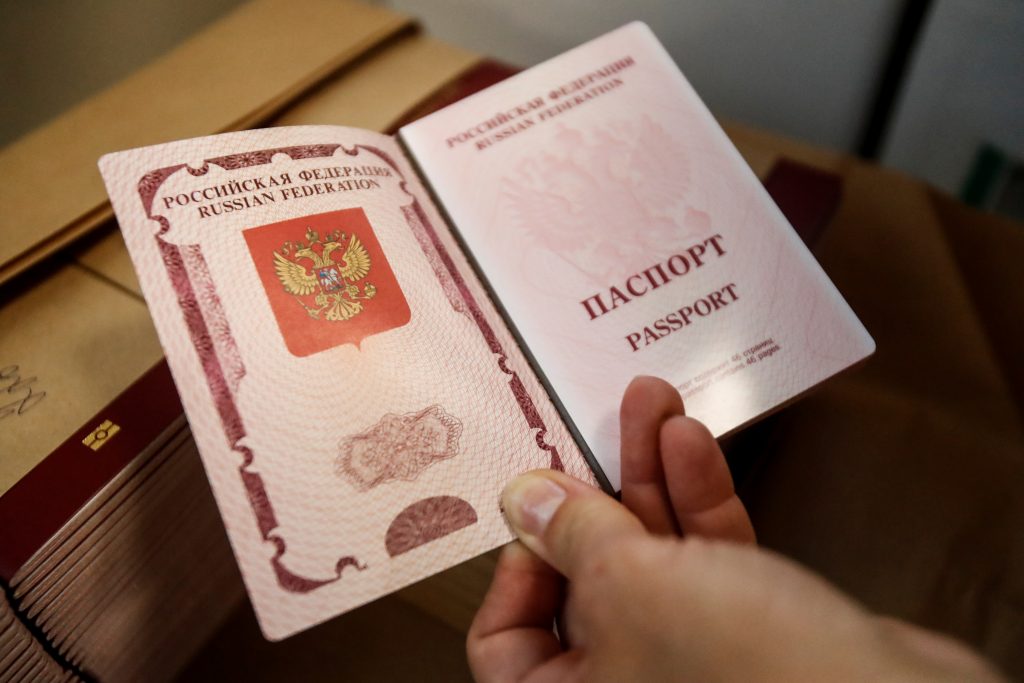 Russian President Vladimir Putin’s recent essay, “On the historical unity of Russians and Ukrainians,” offered nothing entirely new, but it did serve as a chilling reminder that Russia remains fundamentally opposed to Ukrainian statehood. The arguments outlined in Putin’s article make clear that the seven-year undeclared war between the two nations is likely to continue indefinitely, while also underlining the imperial objectives driving Russian strategy towards Ukraine.

In recent years, Kremlin efforts to undermine Ukrainian sovereignty have expanded to include the distribution of Russian passports in areas of eastern Ukraine currently occupied by Moscow’s proxies. The Ukrainian authorities and the international community are still struggling to effectively counter this Russian policy of passportization.

In April 2019, Putin signed a decree easing citizenship rules for Ukrainian nationals in Russian-occupied eastern Ukraine. In May 2021, the Russian government stated that it had issued over half a million passports to Ukrainians as a result of the 2019 decree. Russian officials reportedly plan to distribute one million passports by the end of 2021.

Many of the Ukrainians who have received Russian passports since 2019 are thought to have done so under pressure from the occupation authorities or in order to find employment in Russia. This reality was recently addressed by Ukrainian President Volodymyr Zelenskyy, who commented during an August 5 interview that the issue requires careful handling as many of those who accepted Russian passports found themselves in a “hopeless situation” and had “no choice.”

The Kremlin’s passport distribution policies in eastern Ukraine are nothing new. Moscow has previously used Russian passports in a similar manner to strengthen its grip on occupied regions of Georgia and Moldova. The Warsaw Institute reported that by 2008, 90% of the population of Georgia’s South Ossetia and 85% of Abkhazians had received Russian citizenship. Meanwhile, it is estimated that about 250,000 out of 500,000 people living in Moldova’s breakaway Transnistria region hold Russian citizenship.

The international community has so far failed to prevent Moscow from using Russian passports as a foreign policy tool to undermine the sovereignty of independent countries across the former USSR. This has contributed to the ongoing destabilization of the region and paved the way for the August 2008 Russo-Georgian War. The long-term implications for Ukraine are equally ominous.

The position of Ukraine and its international partners on Russia’s 2019 decree has so far been relatively straightforward: Ukraine, the European Union, the United States, and Canada do not recognize Russian passports issued to Ukrainian nationals because Russia’s actions in this regard clearly threaten the territorial integrity and national security of Ukraine. There are no illusions over Moscow’s desire to legitimize its military presence in eastern Ukraine by claiming to “protect” Russian citizens.

Despite this seemingly unambiguous position, Ukraine’s Western partners did not impose sanctions on Russia for the issuance of Russian passports in occupied eastern Ukraine. Ukraine’s Minister of Foreign Affairs, Dmytro Kuleba, recently stated that it was a mistake by Ukraine’s allies not to properly respond to Russia’s passport policies in 2019. Oleksiy Danilov, Secretary of Ukraine’s National Security and Defense Council, has said that Russian passportization in eastern Ukraine could potentially force a reconsideration of the Minsk agreements.

In July 2021, a bill was registered in the Ukrainian parliament to address the distribution of Russian passports in occupied regions of Ukraine. According to the bill, anyone who voluntarily obtained Russian citizenship may automatically lose their Ukrainian citizenship. Critics of this proposed bill have branded it a populist response that is not constructive and could unnecessarily complicate Ukraine’s own citizenship policies. As President Zelenskyy noted, it may also be difficult in practice to ascertain the “voluntary” status of individual passport applications.

Ukraine and its international partners should certainly continue and possibly enhance current policies of non-recognition towards Russian passports issued to Ukrainian nationals via Putin’s 2019 decree. The Ukrainian authorities should also monitor the logistics of passport issuance to make sure the international community is updated on any changes regarding the Russian state bodies involved in administering the Kremlin’s passportization policies in Ukraine.

Ukraine should look to impose new sanctions and extend existing measures against Russian officials and related agencies involved in passport issuance in eastern Ukraine. At first glance, the effectiveness of such sanctions may appear questionable given Ukraine’s limited leverage over senior Russian officials. However, by imposing sanctions, Ukraine would unequivocally demonstrate its readiness to tackle this issue at the international level. Sanctioned individuals may experience damage to reputation and economic losses, including difficulties doing business in third countries. Crucially, Ukrainian sanctions would also encourage the country’s international partners to impose similar measures.

Beyond direct sanctions, there are also other opportunities to increase the costs of Putin’s aggressive passport policies. For example, the passport issue could play a key role in preventing international recognition of Russia’s forthcoming parliamentary elections in September 2021. With large numbers of Ukrainian nationals in occupied Crimea and eastern Ukraine set to illegally participate in the vote, the international community will have good reason to at least partially reject the results of the election as illegitimate. Refusal to recognize Russia’s parliamentary vote would send a strong message regarding the international consequences of passportization.

Ultimately, the most effective way to counter Russian passport aggression is by supporting the further Euro-Atlantic integration of Ukraine, Georgia, and Moldova. Similar support for Estonia, Latvia, and Lithuania helped the three Baltic nations become EU and NATO members, which significantly bolstered their defense against hostile Russian passport policies.

Vitaliy Nabukhotny is an international human rights lawyer and visiting research assistant at the USIP.

Image: Since the introduction of new regulations in 2019, Moscow has reportedly issued over half a million Russian passports to Ukrainian nationals living in Russian-occupied eastern Ukraine. (REUTERS/Maxim Shemetov)