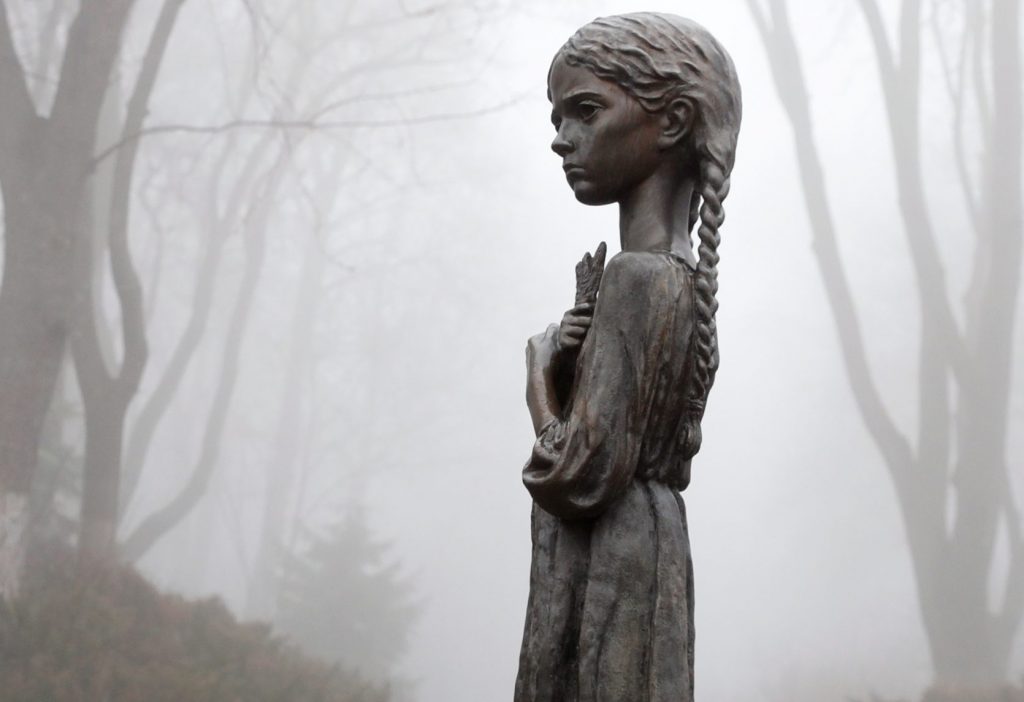 Late last month, a group of vandals attacked and attempted to remove the iconic “Bitter Childhood Memory” statue that stands at the front of Ukraine’s National Museum of the Holodomor Genocide in Kyiv. This statue of a small girl clutching ears of wheat to her chest has come to symbolize a forced famine in early 1930s Soviet Ukraine which is now recognized by 79% of Ukrainians as an act of genocide by the Communist authorities.

The attack in the early hours of August 22 appears to have been well-organized, but it ultimately failed to cause serious damage. However, it did succeed in sparking considerable outrage within Ukrainian society, highlighting the volatility of memory politics in today’s Ukraine as the country continues to forge an independent identity while struggling to come to terms with the legacy of the Soviet past.

The National Holodomor Museum’s general director Olesia Stasiuk called the vandalism incident an assault on Ukrainian national memory. “The nation’s culture is built on the foundations of historical memory,” she commented. “The memory of the Holodomor is part of the history of every Ukrainian, which we have no right to forget for the sake of a sustainable future. What was done with the sculpture is an unacceptable insult to the memory of the whole nation.”

The desecration came at a crucial time for the National Holodomor Museum as it looks to expand and finally live up to its original billing as a memorial complex befitting the millions who perished in one of the twentieth century’s worst crimes.

Throughout the Communist era, the famine remained one of the great taboos within Soviet society and was never officially acknowledged. Instead, research was limited to international academics operating beyond the reach of the Kremlin censors. Following the Soviet collapse, newfound freedoms in independent Ukraine allowed for a better understanding of the atrocity, but it took more than a decade before the famine began to occupy its rightful place at the heart of Ukraine’s national story.

The current National Holodomor Museum was first conceptualized in 2006 and officially unveiled to the public in 2008 following finalization of the first phase of construction. However, the complex has yet to be fully completed.

The initial driving force behind the project was Ukraine’s third post-independence president, Viktor Yushchenko, who made national memory a core theme of his 2005-10 presidency. There was little further progress under Yushchenko’s pro-Kremlin successor, Viktor Yanukovych, who sought to distance his administration from efforts to explore Soviet crimes against humanity.

In 2016, discussions about the museum complex’s expansion and completion finally resumed. During annual Holodomor Remembrance Day memorial events on November 26, 2016, Ukrainian President Petro Poroshenko stated that it was time to complete work on the museum.

With the museum expansion process underway, the vandalism of the “Bitter Childhood Memory” statue is more than just a jab at the tragic history of the famine. Many see it as a painful reminder that the legacy of the Holodomor is still contested by some in today’s Ukraine, where issues of national memory continue to play an important role in contemporary political battles.

The “Bitter Childhood Memory” statue seems to have been chosen as the target of August’s vandalism attack in order to cause maximum distress. This statue of the young girl reflects the horrors suffered by Ukrainian children at the time of the artificial 1932-33 famine. Children were often some of the hardest hit victims during the mass starvation. Many lost parents and family members and were forced to fend for themselves. Some were sent to Soviet-run orphanages while others banded together and survived on the streets. They frequented train stations and bazaars to steal food and beg for money. The Soviet authorities routinely rounded them up in cities as a way to “clean up” urban areas.

At the height of the famine in the first half of 1933, it could be especially dangerous to be a child. With nothing to eat and thousands of people dying per day, there were cases of cannibalism where children were targeted victims. Other youngsters were abandoned in cities by desperate mothers who could no longer care for them. It is these children that the “Bitter Childhood Memory” statue implores us not to forget.

In 2010, a presidential decree officially incorporated the Holodomor Memorial into the State Protocol and Ceremonial of Ukraine. During official visits to Kyiv, heads of government and other visiting officials are invited to visit the National Holodomor Museum and pay their respects in front of the “Bitter Childhood Memory” statue.

Over the past decade, this diplomatic protocol has become a way for Ukraine to ensure that foreign visitors learn the truth about the Holodomor. It has also helped to integrate the commemoration of the famine victims into Ukraine’s national story. The recent vandalism incident is an effort to challenge this healing process that risks reopening the terrible wounds inflicted in the early 1930s.

John Vsetecka is a Fulbright fellow to Ukraine in 2020/2021 and a PhD Candidate in the Department of History at Michigan State University. He is the founder and current co-editor of H-Ukraine.

Image: This Kyiv statue commemorating victims of Stalin's 1930's Ukrainian famine was desecrated on August 22 in what appears to have been a well-planned assault on Ukrainian national memory. (File photo/REUTERS/Valentyn Ogirenko)