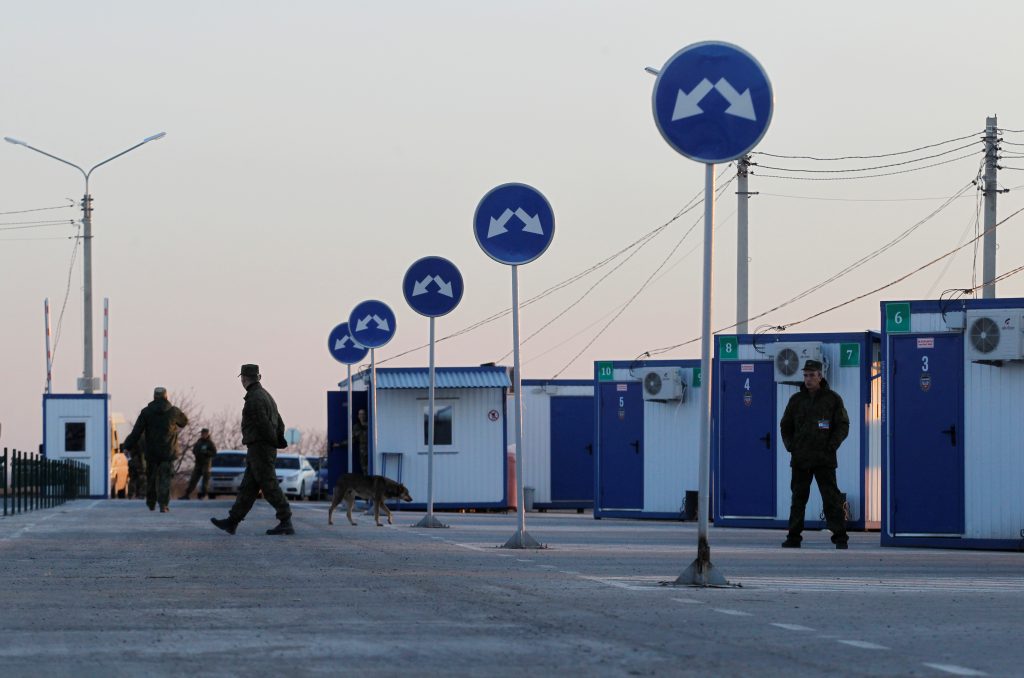 Covid-19 is a global crisis, but its impacts on war zones will prove to be uniquely tragic. Nowhere is this more evident than in the conflict-stricken Donbas region of eastern Ukraine. The internally displaced and conflict-affected population of this region, a disproportionate number of whom are elderly, are inordinately at-risk of the virus.

Compounding upon this problem, the Ukrainian government’s containment strategy has led to the closing of the entry-exit checkpoints (EECPs) along the line of contact. It is harder now than ever for the people of eastern Ukraine to get home, to see their families, and to access essential social programs they rely on. While the picture remains opaque due to a lack of information about both the spread of the virus and the painful consequences of the containment policies, it is clear that the country is paying a huge toll on both fronts.

The full extent of the coronavirus outbreak in Ukraine remains largely unknown. For far longer than most European nations, Ukraine exhibited very limited ability to gauge the reach of the problem. Well into March, the country only possessed the capacity to test a total of around 1,000 people.

Coronavirus first appeared in Ukraine in the southwestern city of Chernivtsi in early March. Within a few weeks, the virus had reached the conflict-affected regions of eastern Ukraine roughly 1,000 kilometers away. Government-controlled Donetsk oblast confirmed a case of Covid-19 on March 21, and government-controlled Luhansk oblast confirmed their first case on March 25.

Case totals in the country, and in the east in particular, have remained anomalously low. The totals in government-controlled Donetsk oblast hovered below 20 for several weeks. In government-controlled Luhansk oblast, the case count didn’t rise above 3 until April 15. Over the past few weeks, the government has undertaken an intense campaign to ramp-up testing, but even with these efforts less than 1 in 300 Ukrainians has been tested, a rate which puts them dead last in Europe.

Ukraine’s abysmal testing rate has been somewhat mitigated by the country’s early and rigid containment measures. The first case of the disease was confirmed on March 3, and by March 12 major cities were closing their schools and banning large gatherings. By March 18, the entire country was in lockdown: restaurants were shuttered, subways in major cities ceased operations, intercity travel was halted, and, critically, both external and internal borders were shut.

However, even this success has proven mixed. While most countries may be well within their rights, and even well within prudence, to halt foreign arrivals, the matter is more complicated when it comes to closing internal boundary lines.

In recent years, Ukrainians have grown increasingly reliant upon the entry-exit checkpoints (EECPs) along the line of contact separating government-controlled Ukraine from the Russian-occupied parts of Donetsk and Luhansk oblasts. In 2016, when the five EECPs first opened up access channels between the divided regions, there were a total of 8.5 million crossings in the year.

More recently, there have been as many as 1.5 million crossings in a single month. Standing in line at the checkpoints has become a fact of life for those living in one of the two provinces cut in half by the conflict. Consequently, the coronavirus containment measures have taken an acute toll on the people there.

In January of 2020, Right to Protection, a Ukrainian NGO that monitors the checkpoints, found that 50% of individuals crossing the contact line were doing so in order to collect a pension or some other kind of government assistance funding; nearly 30% were withdrawing cash from a bank; and almost 20% were visiting family. In a region where 30% of people in need are elderly, the implications of cutting off access to pensions, cash, or family can be irreversible.

It’s impossible to know how many people have been stranded thus far. Right to Protection tracks how many people report themselves as trapped at checkpoints, but these numbers are likely but a fraction of the total. In the last week of April, the number of individuals who had reported themselves on the government-controlled side of the line climbed as high as 70.

On April 25, the Ukrainian government and the self-proclaimed authorities in non-government areas struck a deal to allow 25 persons to leave government controlled areas, and another 22 to enter. These were the first crossings since April 1. Individuals selected to cross were those deemed to possess the most acute need, and they were generally those with health- or age-related maladies. However, countless more people remain trapped. They continue to spend their own money on hotel rooms, food and essentials while waiting to be told they can cross.

The severity of the coronavirus outbreak in Ukraine will likely never be fully understood, nor will the costs of the checkpoint closures. Untold numbers may get sick and go unattended. Many others may have their lives changed irreversibly by inflexible policies at the EECPs. Currently, some 300,000 elderly people can’t access their pensions. Some people can’t withdraw the cash they need to pay their bills. Families can’t check on their elderly or disabled loved ones. Some university students or boarding school children may have gotten lost in the shuffle. What is clear is that, whether it be from the virus itself, or from the policies aimed at containing it, the population of eastern Ukraine will once again be among those who suffer the most.

Eric Fritz works as a Public Information Officer and Project Manager with Right to Protection in Kyiv. Frank Martin works as a Legal Researcher, Writer, and Editor with R2P.

Ukraine’s pro-Russian political forces have been in retreat since 2014, but as the world focuses on the coronavirus crisis, Kremlin-friendly Ukrainian MPs are planning new initiatives with their Moscow colleagues.