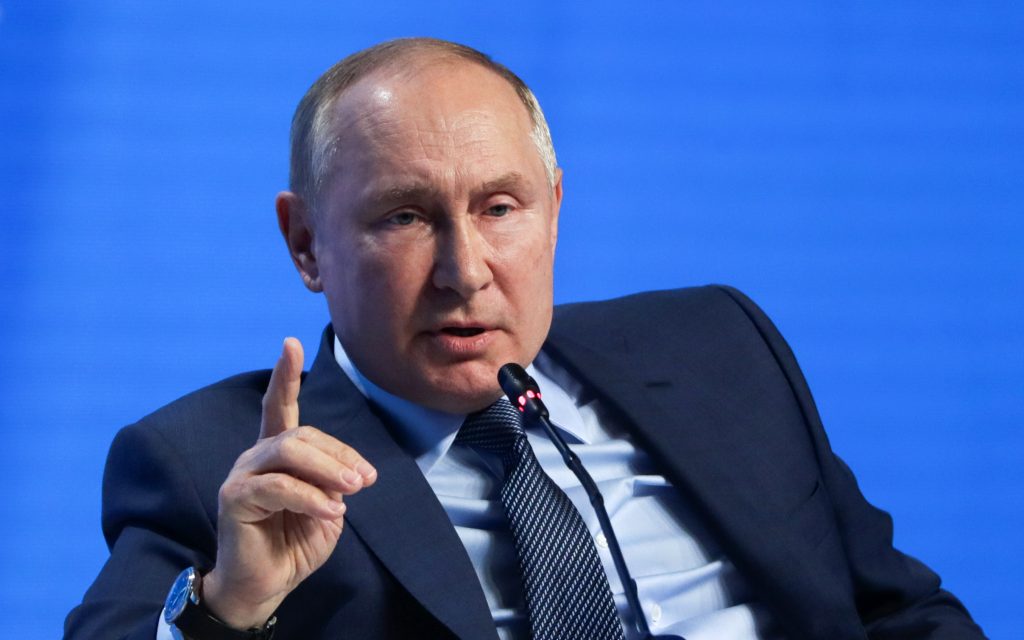 As Europe watches in sheer disbelief while gas prices spiral out of control amid mounting suspicions of Russian energy blackmail, the Kremlin appears to have set its sights on two much-coveted geopolitical prizes.

The first has been widely reported in the mainstream media and focuses on Moscow’s efforts to pressure EU officials into approving the controversial Nord Stream 2 pipeline by limiting supplies to Europe.

Many of those who initially doubted the Kremlin’s intentions have since had second thoughts when president Vladimir Putin himself recently suggested his country could send 10% more gas to Europe once Nord Stream 2 is approved.

The second prize has been much less discussed but goes straight to the heart of Russia’s fundamental disagreement with Europe’s liberal foundations.

As gas prices followed days of chaotic volatility throughout the summer, Putin criticised “smart alecs” in the European Commission for pushing through gas market reform and failing to sign long-term supply contracts.

Putin’s snide remarks brought nothing new. In fact, they merely reiterated Russia’s old grievance over the EU’s gas market liberalisation which former Gazprom chairman Dmitry Medvedev described as “the most stupid idea in modern economic history” even as far back as 2006.

What is important is that Russia has now seized on Europe’s energy crisis to pressure Brussels into reconsidering the very structure of its energy markets, which had been founded on the same ideological pillars that underpin the entire bloc, namely free trade, competition, and transparency.

Moscow has also found a similar window of opportunity in Moldova to force its pro-EU government and president to abandon the application of EU rules by limiting gas supplies just as temperatures have begun to plunge.

Moldova’s desire to pursue reform has been raising eyebrows for a while. During summer 2021, some European officials were already pointing out in private conversations that the country’s desire to integrate with neighbouring Romania and Ukraine via market mechanisms was not going down well in Moscow.

The disagreement climaxed at the start of the heating season when Moldova failed to conclude a one-year supply contract with Gazprom, receiving just a one-month extension to the previous agreement which expired at the end of September. Within a few days, it became obvious that Gazprom was supplying only 67% of Moldova’s estimated 90 million cubic meter demand that month, pushing local officials to ask industrial producers to reduce consumption before finally declaring a 30-day state of emergency on 22 October.

In public, officials said disagreements surrounded the price of gas requested by Gazprom, which Moldova was unwilling to underwrite, and the clearing of debts and penalties which Gazprom said had reached EUR 709 million, with the Russians insisting on urgent repayment by 1 December.

In private, however, Moldovan officials say Gazprom also conditioned approval of the unbundling of the transmission operations from the vertically-integrated incumbent in which it holds a majority stake on debt repayment. With Moldova currently struggling economically, it is uncertain whether it can repay the debt, let alone clear it by December.

The EU and Moldovan examples show how Russia now seeks to reverse years of reform. This includes pushing for the reintroduction of long-term contracts for European consumers, looking to gain exemptions from competition rules for its own pipelines including Nord Stream 2, and pressuring countries such as Moldova to abandon EU-supported reforms.

Long-term contracts offer no guarantee that buyers would always benefit from cheaper prices. However, they do lock in market share for producers such as Gazprom, while also hampering consumers from reacting swiftly in case of market volatility. If anything, the geopolitical risk which has partially contributed to major price swings from record lows in 2020 to record highs in 2021 should persuade companies to use the flexibility granted by markets to react quickly and efficiently.

In the past, long-term contracts such as Ukraine’s 2010 agreement, whereby Gazprom offered a hefty price discount in exchange for Kyiv renewing a lease on Russia’s naval base in Crimea until 2042, served to deepen buyer vulnerability and dependence on Russia.

Russia’s push for the exemption of Nord Stream 2 from EU rules for competition, unbundling, and transparency would have the same effect, namely to lock in control over supply routes while also denying the emergence of competition or access to critical information tracking the exact volumes entering European markets.

Recent developments make clear that the energy crisis in the EU and Moldova is far from over. It is currently difficult to predict whether European policymakers will stand their ground and refuse to yield to Russian pressure. If the coming winter turns particularly cold, no politician would want to risk their career by sacrificing access to natural gas on a point of principle.

However, what has happened recently in both Moldova and the EU shows that rather than deepening reliance on Russian gas, European authorities should seek to protect the current market structure and encourage further diversification of suppliers and fuels. Brussels must also start an immediate investigation into the causes of the energy crisis and ensure that any parties which may have contributed to it face sanctions.

In Moldova’s case, the current crisis may prove a blessing in disguise, having shocked policymakers into exploring the possibility of buying gas from the Ukrainian and Romanian gas markets in line with European rules and practices. This is not what Putin intended but the genie is already out of the bottle.