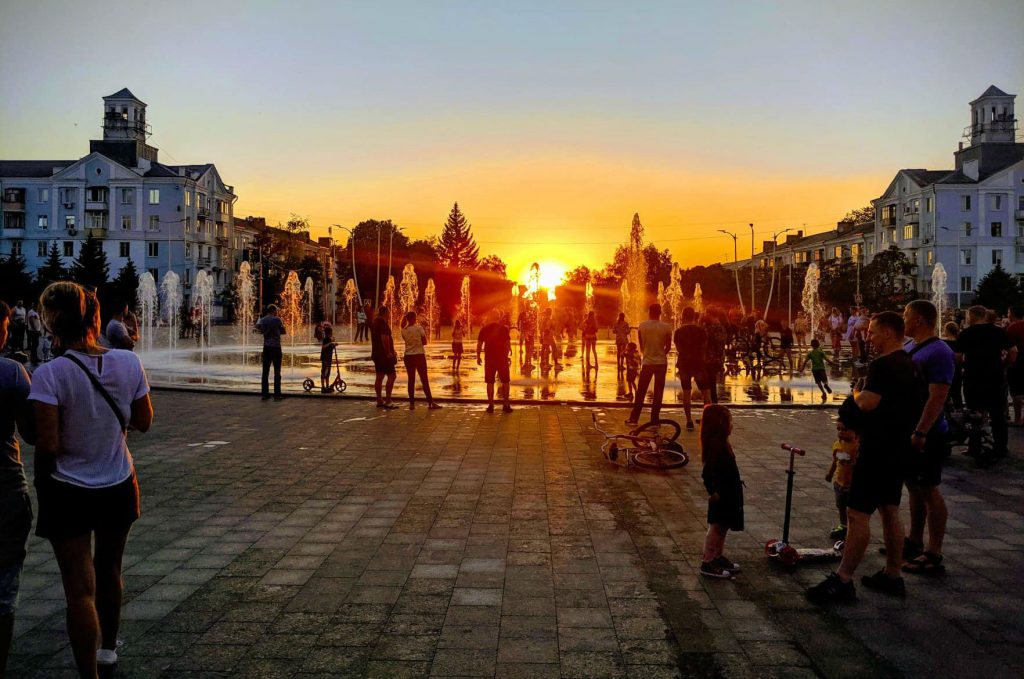 Almost every image of eastern Ukraine involves suffering of some sort: old people waiting in endless queues for tiny pensions; internally displaced persons living in cramped temporary housing that is no longer temporary; Ukrainian troops operating with few modern conveniences. Since 2014, most people with education and means have fled the region. One could be forgiven for dismissing it as backward and hopeless.

The reality, however, is that the Donbas is changing—perhaps even faster than other regions of Ukraine because it is starting from such a low level of development.

Many Western experts avoid the Donbas because it’s a knotty problem without an easy solution, and there’s plenty in Kyiv to keep one busy. I was one of those experts until a few weeks ago, when I finally jumped into a car and sped to Kramatorsk.

Almost everything I thought I knew about the Donbas was wrong. And I cannot wait to go back.

Every day, Evgeniy Vilinsky, the first deputy governor of Donetsk Regional State Administration, starts his morning meeting with the same questions. “How are you? How is your health? How are my fishing poles?”

Vilinsky is not a subtle man. He looks directly at Igor Stokoz, his deputy who handles humanitarian issues, with a twinkle in his eye.

Stokoz loves to fish and has a fine collection of fishing poles, knives, and rod and reels that he’s promised Vilinsky when he dies.

The pair tease each other constantly, but beneath this banter, Vilinsky and Stokoz are deadly serious about turning the Donbas around. The most striking thing about the duo is their motivation. Neither one hails from the Donbas; both came after 2015 out of a sense of obligation.

They are perhaps the most unusual pair of administrators in the country. Vilinsky, a civil engineer, lawyer, and consultant who has worked for Bain and Booz Allen Hamilton, speaks in complete paragraphs that require no editing about comprehensive development strategies; he seems to have thought through just about every problem in Ukraine.

Stokoz, meanwhile, has done just about everything under the sun: he was a “red director” of a Soviet plant, spent seven years as a professor of Ukrainian literature at Dragomanov University, and more recently bought and sold real estate in Kyiv. The bald and grizzled Stokoz is tough. Covered in pro-Ukrainian tattoos, he smokes constantly and offers brilliant, running commentary on Ukraine’s politics for six straight hours while he shows me how Donetsk oblast is changing for the better.

When Vilinsky and Stokoz moved to Kramatorsk in 2015, there was little there; it’s hard to believe two cosmopolitan people willingly agreed to the positions. No dry cleaners, no modern cafes, no public places for people to sit and talk, and no decent restaurants. Some dining establishments were only open during the work week and reserved for business negotiations.

“Locals saw that they could live in another style,” Vilinsky observed.

At least five good restaurants have sprung up, and even longstanding restaurants are now open on weekends—and often full of families. The service, quality of food, and presentation at one Kramatorsk restaurant rivals the best in Kyiv.

Dry cleaners have popped up. Cars are starting to stop in crosswalks when people are waiting to cross: Vilinsky and Stokoz started the practice and asked their friends to do the same.

The administration initiated and pushed the city council to renovate the main square and to install a fountain in the center of Kramatorsk that is lit up at night. On a Monday night in June, I counted dozens of young people hanging out there and talking at midnight, like any in other European city. This picture is revolutionary in the Donbas.

In the past, life in each of the region’s towns revolved around a large factory that was the center of one’s work and social life. People lived in drab apartments nearby.

That’s all changing, and much of it is the result of young people. In Kostiantynivka, a town of 75,000 people who mainly worked in a now defunct glass factory, seventeen-year-old Sofia Pilipenko shyly shows me Druzi, a community center that opened in January 2017. Originally a Chinese restaurant on the second story of an old movie theater, Pilipenko and two other volunteers transformed the large room, with help from the Lviv Education Foundation and the United States Agency for International Development. A cozy center lined with plants and books that is open fifty hours per week, it’s a place where people can talk, argue, and listen to outside speakers. Last year, Sofia and her friends organized a music festival in the town’s industrial zone that drew 2,000 people with well-known Ukrainian bands like Yuko and Oy Sound System, and they plan to do the same thing this year.

“People want to do something on their own,” Pilipenko said, pointing to an initiative to bring murals with socially conscious themes to her town.

She just graduated from high school and will move to Kyiv to attend Taras Shevchenko University in the fall. The young organizer, who spent a year in Las Vegas, Nevada, while in high school, said she wants to come back to Kostiantynivka after graduation because she likes the community.

“Our region has a lot of potential. When I was in the United States, it was so boring. Here, you have so much more to create,” Pilipenko said.

In the small village of Illinivka, a husband and wife team are creating twenty different kinds of cheese, including delicious parmesan and mozzarella, five kinds of sausage, and the best yogurt I’ve had anywhere in the world. With a 500,000 hryvnia grant (about $20,000) from the Donetsk State Regional Administration, Snezhana Alnikova and Sergiy Sviridenko bought commercial equipment and launched Cossack Courtyard (Козацьке Подвір'я) from their small farm after watching instructional videos on YouTube and experimenting. They sell their products on the internet and locally, but haven’t yet found a way to market their outstanding cheese, salami, and yogurt to foodies in Kyiv and beyond.

Even in Avdiyvka, a town which sits close to the frontlines and saw some of the hardest fighting and destruction in 2017, life is gradually returning to normal. Between 2015 and 2018, 780 buildings were damaged in Avdiyvka, according to regional authorities. But an iconic apartment building with a mural of Ukrainian language teacher Maryna Marchenko is finally being repaired, and in another happy ending, Marchenko’s daughter is now teaching Ukrainian language in the local school. People have also started to return: in 2013, 42,000 people lived in the town; between 2014-2016, those numbers plunged to 7,000. But since 2019, regional authorities have estimated that 22,000 people live there.

Much of the credit belongs to the capable team running the show. Compare Donetsk to Luhansk on education, pensions, roads, health care, and so on, and it’s no competition.

“If you look at every ranking, Donetsk pretty much tops it,” Yevhen Hlibovytsky, a partner at the pro.mova consulting firm, said.

Vilinsky and Stokoz quickly deflect praise with their trademark sense of humor.

“A story of the two assholes,” Stokoz says, tongue in cheek. “We make people do things they don’t want to do.”

Whatever the duo is doing, it’s working. Everyone knows them and respects them, and Ukraine and the Donbas are all the better for it.

Melinda Haring is the editor of the UkraineAlert blog at the Atlantic Council and a senior fellow at the Foreign Policy Research Institute. She tweets @melindaharing. Editor's note: This trip would not have been possible without the kind support of Ruslan Miroshnichenko and the Civil-Military Cooperation of the Armed Forces of Ukraine.

That other Ukraine controversy that just won’t go away

Ukraine stands between two conflict resolution formulas: to freeze the Donbas or to try and integrate it.

Image: In the spring of 2019, a new fountain was installed in Kramatorsk, Ukraine. It serve as a place for people to meet and hang out. Credit: Yevhen Hlibovytsky