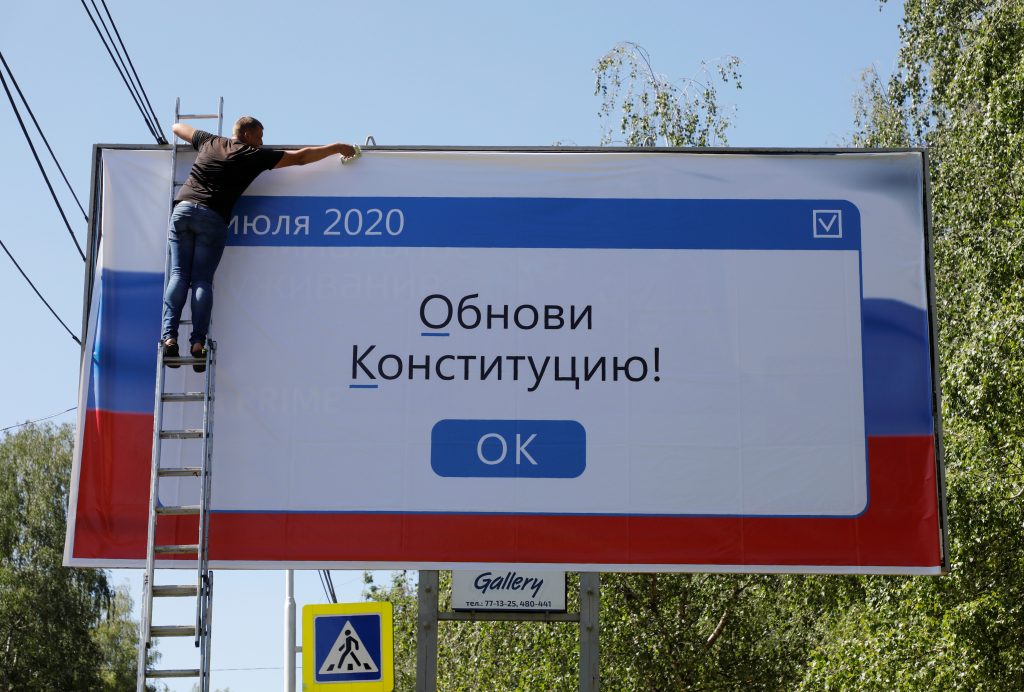 On July 1, Russia will stage a referendum that will pave the way for Vladimir Putin to extend his rule over the country until 2036. While the referendum is being officially positioned as a vote on a series of constitutional amendments, only the most credulous of observers would doubt that the true purpose of the exercise is to prolong Putin’s reign indefinitely. Nor is there much suspense regarding the result. Indeed, given the purely decorative nature of voting in Putin’s Russia, the only real debate is over the size of the coming government majority.

As Russians look forward to a future of endless Putinism, Ukrainians are preparing for local elections in October. Like all of Ukraine’s national votes since the country’s 2004 Orange Revolution, this ballot is expected to be fiercely contested. Allegations of misconduct will be hurled back and forth, while numerous incidents of bribery, administrative abuse, and other electoral shenanigans can also be expected. There will be clone candidates, dirty tricks, and populism galore. Nevertheless, by the standards of the post-Soviet region, the vote will be remarkably free and fair. This somewhat dysfunctional but nonetheless vibrant form of democracy is increasingly taken for granted in today’s Ukraine, with implications for the balance of power throughout Eastern Europe.

Russia’s farcical Putin referendum in many ways confirms the country’s geopolitical divorce from democratic Ukraine and underlines the growing distance between two countries that were once widely seen as virtually indivisible. However, the diverging post-Soviet paths adopted by Russia and Ukraine may not be as surprising as they might initially appear. Indeed, is it possible to argue that this divergence reflects fundamental differences in mentality and political culture that have roots in the distant past. Russian society has traditionally favored a more collectivist approach marked by a preference for strict hierarchies and autocracy. Historically, the exception to this rule was the more democratically inclined Republic of Novgorod, which was utterly destroyed by the Moscow czars.

In contrast, Ukrainians throughout history have typically been more individualistic, with an emphasis on personal freedoms and a reluctance to suppress these urges in favor of a common cause. Ukraine’s democratic instincts are reflected in the long Cossack tradition of elected leaders, while the early eighteenth century constitution written by Ukrainian Cossack hetman Pylyp Orlyk is regarded as a landmark document in the development of modern European democracy that was in many ways well ahead of its time.

The Soviet authorities worked hard to erase the differences in political culture between Russia and Ukraine, but were only partially successful. Soviet policies fostered a strong sense of paternalism among the Ukrainian population, but were unable to prevent the emergence of a democratic resistance that would eventually become one of the key factors behind the country’s independence movement.

Since 1991, independent Ukraine’s transition away from the Soviet system has been anything but smooth. Corruption remains routine and is in many cases deeply embedded within state institutions. Together with the legacy of Soviet over-regulation, this has created a climate where oligarchs are able to thrive. Despite these shortcomings, today’s Ukraine is a strikingly pluralistic society that is reflected in the country’s rough and ready democratic traditions.

Russia’s post-Soviet political evolution has followed a different path. After a brief flirtation with democracy in the 1990s, Russia has returned to the far more familiar authoritarian culture of the Soviet and Czarist epochs. In order to justify this retreat, the Kremlin has skillfully attributed the economic hardships of the first post-Soviet decade to the negative influence of democracy, liberalism, and the West. At the same time, Putin has rehabilitated the Soviet Union, encouraged the revival of Stalin’s personality cult, and placed the Red Army victory over Nazi Germany at the center of modern Russian national identity.

The foreign policy of the Cold War has also been partially revived. In recent years, Russia has pursued a strategy of hybrid warfare against the entire Western world with the goal of destabilizing and discrediting democratic institutions via a combination of disinformation, political corruption, and support for extremist elements.

This need to discredit democracy lies at the heart of Russia’s ongoing undeclared war against Ukraine. The conflict allows the Kremlin to keep Ukraine destabilized and prevents the country’s democratic progress from serving as inspiration for domestic Russian audiences. Moscow has traditionally been dismissive of Ukraine’s statehood pretensions and has instead portrayed the country as part of Russia’s historical heartlands. This makes Ukrainian democracy uniquely dangerous for the Kremlin’s authoritarian model. If democracy can take root in Ukraine, why not in Russia itself?

So far, Russia’s war has failed to achieve the desired result of derailing Ukraine’s transition towards democracy. Far from collapsing into chaos, Ukraine has demonstrated remarkable resilience. Indeed, the country was able to significantly consolidate its democratic credentials in 2019 via presidential and parliamentary elections that won international praise and brought political outsider Volodymyr Zelenskyy to power. It is also worth noting that support for Ukraine’s pro-Kremlin political parties collapsed from traditional levels of over 40% to less than 20%.

This consolidation of Ukrainian democracy makes the country’s voluntary return to the Russian orbit look increasingly improbable. It also means that any attempt to forcibly incorporate Ukraine into a Russia-led union would be an extremely dangerous gamble for the Kremlin to undertake. The current Russian authorities know only too well that even during Soviet times, most gulag rebellions were led by Ukrainian prisoners. Ukraine’s people power uprisings of 2004 and 2014, together with the volunteerism behind the country’s ongoing war effort, are vivid reminders that Ukrainians remain ready to fight for their democratic freedoms. If necessary, they could easily encourage others to do likewise.

The growing distance between today’s Ukraine and Russia is not always immediately obvious to international observers, who are still often preoccupied with the deep historical ties between the two countries. This leads to false assumptions regarding Ukraine’s place in Russia’s geopolitical sphere of influence. In reality, Ukraine’s embrace of democracy and Russia’s retreat into authoritarianism mean the two countries are heading in opposite directions with very little prospect of any possible future reintegration. This means Russia’s war in Ukraine is not only criminal but also futile.

Moscow can longer prevent the ultimate loss of Ukraine, but rather than acknowledge this painful geopolitical reality, it will continue to attack and destabilize the country until the cost of doing so becomes too high. Only the international community can impose such costs. As Putin moves to extend his reign for another generation, now would be a good time to send a clear message to the Russian ruler. His position in the Kremlin may be secure for the foreseeable future, but unless he ends the war against Ukraine, he faces the prospect of indefinite isolation.