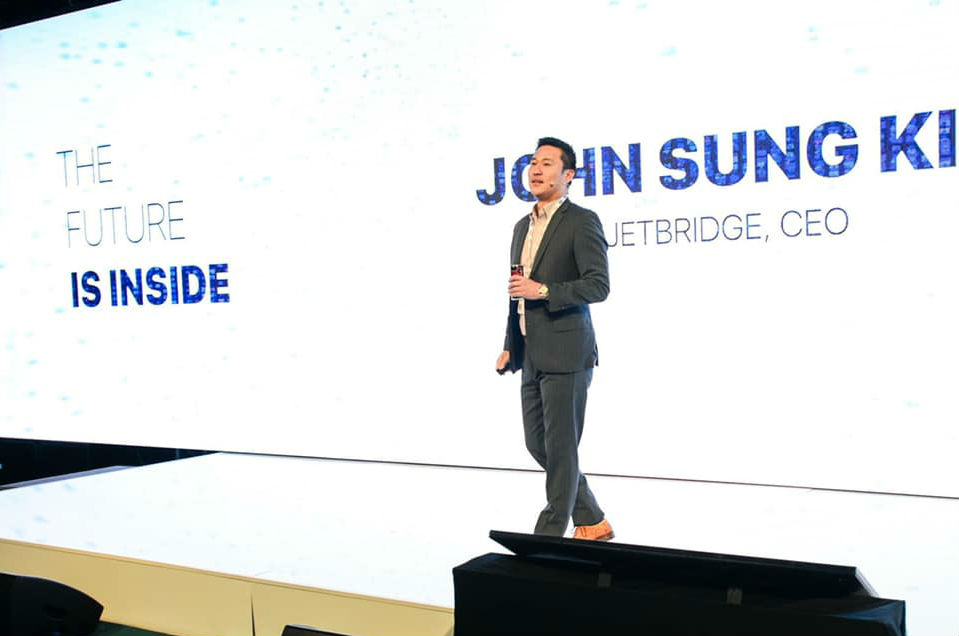 John Sung Kim is the CEO of JetBridge, an outsourcing and outstaffing company based in Kyiv, Ukraine. Courtesy photo

“Some of the greatest Ukrainian patriots aren’t even Ukrainian,” the eminently quotable public intellectual Yevhen Hlibovotsky is fond of saying.

While he didn’t have John Sung Kim in mind, he might have. Kim, forty-five, is a wealthy Korean-American entrepreneur who built and sold two companies (one IPO, one all cash sale) in Silicon Valley before moving to Kyiv in 2016. He’s also an evangelist for Ukraine’s tech scene.

Kim is dead set on changing Ukraine by teaching engineers and entrepreneurs how to attract venture capital and build world-class startups. But that’s not all. He also wants to change the country’s mentality, from the short-term time horizons he sees everywhere to longer, big-picture thinking. When he can convince top talent to take a lower salary combined with equity in a company instead of just more cash, that will be a game changer for the country, he says.

There’s no shortage of raw talent in Ukraine. “The top 3 percent of talent in Ukraine is world-class,” Kim says over coffee in Kyiv. He says the country’s top engineers are good enough to work at Google and Facebook, and the second layer is outstanding, but with one caveat: “They lack soft skills.”

Kim has been living in Kyiv for nearly three years and he knows what he’s talking about. He spends 90 percent of his time recruiting engineers for his company, JetBridge, a managed outsourcing and outstaffing company based in the capital.

One way Kim measures the health of the country and the time horizons of his recruits is through the “bread today, steak tomorrow” exercise. He asks interviewees if they can have bread today or steak tomorrow, which would they choose? In other words, “Would you like stock options in this company or $500 a month more with no equity?” He says that people in the East want the bread now because they don’t trust that the company will be there tomorrow; in the West, people say steak.

“In Silicon Valley, the mentality is ‘Keep the bread, keep the steak. In a month, I want the steak restaurant,’” he said. It’s a radical shift, but Kim is sure that once engineers start asking for equity in a company, Ukraine will massively change. Once they become owners, engineers will have a stake in the product—and that will affect their work ethic.

That thinking isn’t the only challenge he faces. The talent he talks to doesn’t prepare for meetings and tries to take notes on their phone if they take notes at all. Kim, who doesn’t glance at his phone for two hours while we talk, urges his students to use a paper notebook to maintain eye contact and to search someone online before an interview to see if he or she has written anything that might be the basis of a conversation. Ask intelligent questions and show an interest in the person, he said.

The quality that perhaps drives Kim the craziest, though, is the “Fine, forget it” approach. Entrepreneurs and engineers might pitch him for startup capital, but they never follow up or try again. He’s trying to retrain them to ask, “What metrics would you need to see for us to get another meeting?”

Very few startups in Ukraine have pitched him a second time, which he finds shocking. Persistence is the key to getting backed in Silicon Valley. And no one knows how to pitch. In Ukraine, pitches almost always open with a history lesson, rather than data or dates, which he said is a more effective way of getting to yes.

Kim says the hardest part of recruiting is finding people who will go above and beyond the expected forty-hour workweek. He always asks recruits how many hours they worked in their previous job, and no one has ever told him more than forty hours.

“Sometimes you’re going to have to show up on Saturday,” Kim says with a shrug. In Silicon Valley, they have a phrase for this: “Let’s bust it out over the weekend.” It means that a project requires everyone to pitch in and work all weekend to meet a goal. So far, Kim hasn’t seen many Ukrainians with this mindset. And most engineers have a side hustle; without a strict manager, engineers in Ukraine tend to stray from their day jobs.

In spite of his criticism, Kim doesn’t blame Ukrainian engineers for their lack of soft skills. “They don’t have role models,” he said.

Kim wants to be one of those role models. He isn’t making any money from his current company in Ukraine; anything he makes goes back into the business. He also teaches a class called “executive communication” at Taras Shevchenko University and is eager to connect venture capitalists in California with entrepreneurs in Ukraine.

He sees a huge reservoir of good, low-cost talent in Ukraine. The country hasn’t yet had a unicorn—a privately held startup company valued at over $1 billion—but he believes it’s only a matter of time and mentorship. He points to GitLab, whose competitor was acquired by Microsoft in 2018 for $7.5 billion, and the Ukrainian artificial intelligence startup People.ai valued at $500,000. No one has exited the market yet, though.

When he sold his second startup, DoctorBase, in 2015, he decided to take a break from fifteen years of pure grind and travel the world. “People make $10 million or more and they either buy a yacht or build a legacy,” he said. He opted to build a legacy, but wasn’t sure exactly where.

The jovial entrepreneur is from a Korean-American family, and Ukraine wasn’t on his radar at the time. But his co-founder is of Ukrainian heritage, so he agreed to visit. He was blown away by what he found—and it didn’t hurt that he fell in love with a Ukrainian woman.

He now spends 50 percent of his time in Kyiv and 50 percent in San Francisco. JetBridge is registered in Delaware, because “it’s impossible for foreigners to work here,” as others have lamented. Kim says foreigners have three options: invest in a Ukrainian company and potentially lose one’s investment; marry a Ukrainian and wait for two years to get residency; or work for a Ukrainian company, pay taxes, and buy a fake address. Until the government reforms its courts and place of residence registration (propiska), the best option for foreign entrepreneurs who want to do business in Ukraine is to register their businesses abroad, Kim believes.

The endlessly energetic entrepreneur has more than just his Silicon Valley experience to draw on. He says that South Korea may offer some development lessons for Ukraine. The small country was not always an “Asian Tiger” economy or exporter of high-tech. Education played an enormous role in the country’s development. Years ago, the South Korean government set up programs that brought foreigners there to teach English, technology, and the arts. Since then, there’s been an explosion in dance, pop music, tech, and innovation. Ukraine has everything it needs to do the same thing, he said.

He wants his future Korean-Ukrainian-American children to look back at what he did in Ukraine and say, “Wow.”

Kim told his San Francisco-based business partners, “We have an opportunity to be Lewis and Clark in Ukraine; we can make a huge difference here,” he said.