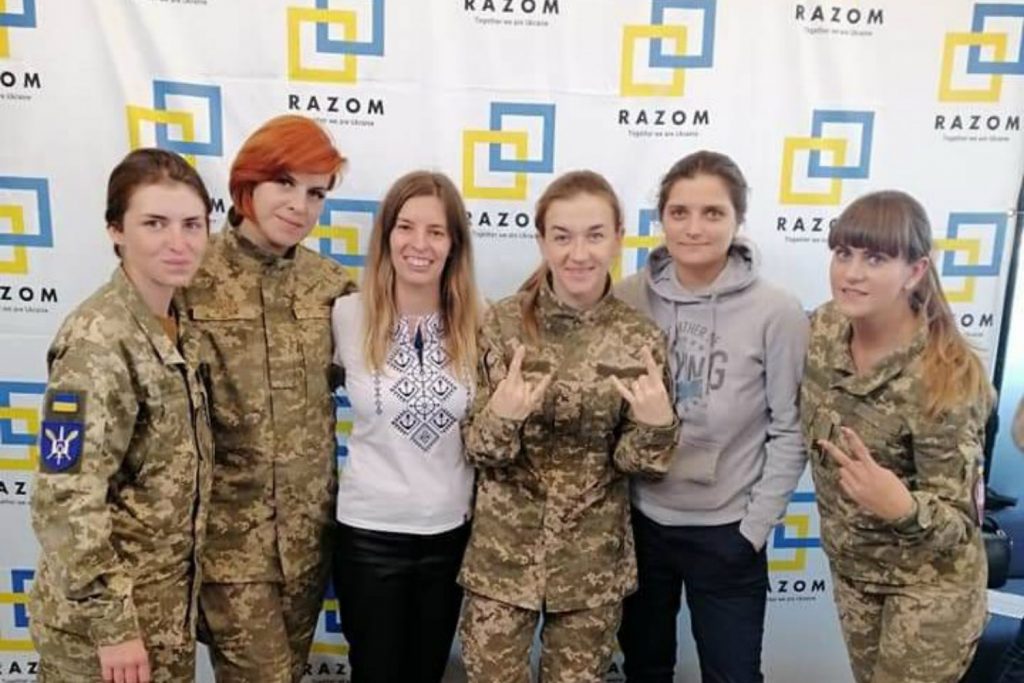 The six women in fatigues sitting around a well-appointed brunch table in suburban Washington give an impression of sincerity and sacrifice. Members of the Ukraine Women’s Veterans Movement, they were in Washington, DC, from October 7-12, to promote their new report, Invisible Battalion 2.0, a national survey of the status of Ukraine’s women veterans. They also screened their documentary Invisible Battalion, which chronicles six women serving on the Donbas front in 2014-2015, combating Russia’s military and its proxy fighters. They served as snipers, medics, and shock troopers at a time when the Ukrainian military, gutted by corruption, had little capacity to fight. They tell their stories simply—why they fought, their position, and the impact their service had on themselves and their families. Reading between the lines, they are haunted by lost comrades, the impenetrable void between those that have served and those at home, and the deeply rooted discrimination women combatants face.

Yuliia Matvienko served as a sniper. Her story is memorialized in the Invisible Battalion documentary, which shows her establishing a sniper’s hide with two male colleagues. One, a radio operator, provides the coordinates for a Russian unit. The scene is a slice of chaos, as the operator shouts a confusion of commands. Yuliia is a “spotter,” who scans the immediate patrol area to protect colleagues as they execute long-range shots. She describes her role in nurturing terms, to protect and to recover “our guys”—the dead bodies she sees through her scope—who have been killed by Russian sharpshooters and shelling. In another scene, Yuliia receives a devastating phone call. A Ukrainian soldier, who served with her in several hides, has committed suicide. Devastated she pushes the sadness aside to remain focused on the fight. Any mourning must wait until she leaves the front.

At home, Matvienko faces other challenges. The former economist is the mother of two children whose personal life came into conflict with her patriotic calling: she got divorced during her service. About seventy percent of women vets have gotten divorced as a result of their service, the delegation estimates.

Ukraine after the armed forces, as told by the delegation visiting Washington, is not a place that supports women veterans’ recovery and transition. Forced to use military equipment made for men, such as heavy packs, women suffer back problems that are rarely addressed. The military officially designates women combatants as seamstresses and cooks, making them ineligible for combatant health benefits. In 2018, a Ministry of Defense decree opened several combat roles to women: snipers, intelligence officers, and commanders of military hardware.

Despite the nod to the critical role women play in the war with Russia, representatives of the Ukraine Women’s Veterans Movement note that discrimination has increased. Those who volunteered at the front in the initial months of the invasion were treated as equals. As the Ukrainian military has professionalized, sexual harassment and discrimination has become entrenched both in the field and on the home front. Women serving at the front have been investigated at home for child abandonment. Society tends to stereotype these women soldiers as sexually promiscuous. Harassment is rarely investigated or addressed because it is rarely reported. Women understand that the investigation will be conducted by peers of the perpetrators. There is no military justice system in Ukraine.

In the early days of the war, Andriana Susak was a volunteer shock trooper with the Aidar unit. She served with her husband, leaving the front only when she was five months pregnant. In one devastating afternoon, she saw an entire unit killed, except one soldier, who has had thirty-five surgeries to remove the shrapnel. Her husband still serves at the front. She is at home, working for the Ukraine Women’s Veterans Movement and raising her son. She has no access to childcare, making it impossible to earn a living. The Ministry of Defense provides no support to families whose head of household is at the front on five-year deployments. Andriana’s thoughts, however, remain at the front. Her inner circle has become quite small, comprised of the few remaining survivors from her unit.

The Ukraine Women’s Veterans Movement, in meetings in Washington sponsored by the National Democratic Institute (NDI), spoke of their work as a multi-front struggle. They describe their documentary as a fight against Russian disinformation by showing the devastating effects of Moscow’s aggression on Ukrainian society: “We are a country that suffers collectively from PTSD.”

The group is also advocating to end gender-based discrimination. They want women serving in combat positions to be formally recognized for their service and receive the associated benefits. Members of the movement acknowledge that they will not benefit from the struggle for full gender equality in the armed forces.  They are fighting for the women who will come after them, for example, the first unit of women already studying at the Ivan Bohun Kyiv Military Lyceum who “should not experience the depth of discrimination” that they have. They see their campaign for equality as intrinsically linked to their country’s determination to achieve full democracy.

Their most powerful struggle, however, is shown in the documentary. It is the struggle to hold on to their humanity and their land. Previously, as economists, medical students, chemists, and writers, they “never imagined that they could kill.” In their down time on the front, they sing, write poetry, and pray, while the world and many of their fellow citizens suppress the existence of this invisible war, and women’s roles in it.

Lauren Van Metre is a nonresident senior fellow at the Atlantic Council and a senior advisor at the National Democratic Institute. Steven Steiner is a retired US diplomat and the former gender advisor at the United States Institute of Peace.