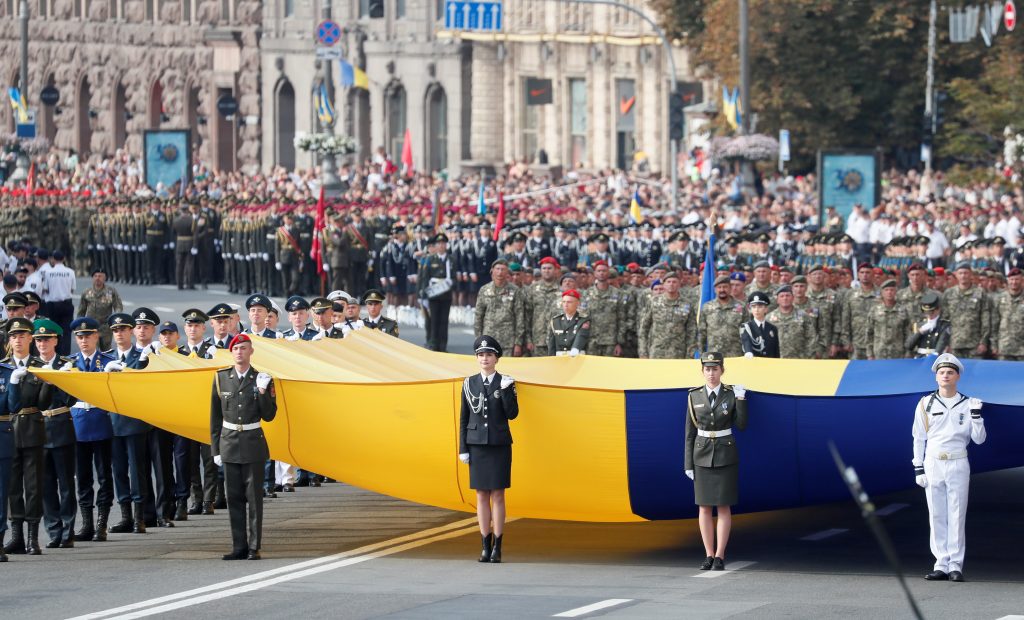 Ukraine marked three decades of independence on August 24 with a spectacular parade in downtown Kyiv that showcased the country’s growing self-confidence and increasing military muscle. With a host of foreign dignitaries and visiting heads of state in attendance, Ukraine’s President Zelenskyy led the celebrations with a speech promising to return territories currently under Russian occupation and make further progress towards Ukraine’s Euro-Atlantic integration.

Ukraine declared independence from the Soviet Union on August 24, 1991, in the wake of an attempted KGB coup in Moscow. Over the past seven years of undeclared war with Russia, the holiday has taken on new meaning as a symbol of Ukraine’s defiance and readiness to defend its sovereignty.

This year’s jubilee Independence Day festivities were on a larger scale than usual and included events across the country. The centerpiece was a major military parade in the capital accompanied by some cleverly choreographed homages to Ukrainian history that captured the country’s strengthening sense of national identity.

As Ukrainians toasted this latest milestone, the Atlantic Council invited a range of experts to reflect on the key events that have defined the past three decades of Ukrainian independence. From the political to the personal, what have been the most significant developments in Ukraine’s national journey since 1991?

Vitaliy Sych, Publisher, NV Magazine: In my opinion, Russian aggression was the single most significant and decisive event to take place during Ukaine’s first three decades of independence. It changed everything, serving to crystallize and accelerate Ukraine’s national direction.

Solomiia Bobrovska, Ukrainian MP, Holos faction: The most important development over the past thirty years of independence has been the shift in consciousness within Ukrainian society. The first evidence of this process was the Revolution on Granite in 1990, which came prior to the restoration of Ukrainian independence and helped make this historic breakthrough possible. The 2004 Orange Revolution demonstrated that ordinary Ukrainians really could influence the direction of the nation. Almost ten years later, the 2013-14 Revolution of Dignity paved the way for the final break-up of empire and defined Ukraine’s future geopolitical course.

The other side of this shift in consciousness has been in terms of Ukraine’s ties with Russia. The current conflict between the two countries is typically said to have begun in 2014, but in reality it has been taking place in different forms for centuries. Recent changes in the Ukrainian-Russian relationship have been complex and painful, but they are now irreversible and in many ways define the first three decades of Ukraine’s renewed independence.

Roman Waschuk, former Canadian Ambassador to Ukraine: In terms of significance, I would opt for the Orange Revolution. Not so much because of the initial achievements and later disappointments of the revolution itself, but because it was the crucible of a domestic insurrection tradition and of grandiloquent yet ambivalent foreign engagement. Both tendencies continue to mark Ukraine to this day.

The recurring threat of a bottom-up Maidan has constrained the threat of authoritarianism, but has also made the country harder to govern, and still diverts political energies away from humdrum compromise towards dreams of prevailing by overturning the negotiating table.

Meanwhile, Western rhetorical and grant support for democracy and people power have run up against the cold, hard, armored realities of Russia’s determination to reimpose its sway, which is also driven by Putin’s own memories of 2004/2014 and his fear of a Moscow Maidan. Looking ahead, Ukraine will need all the moderate domestic consensus and agency it can muster to galvanize the support of Euro-Atlantic partners currently reeling from their setback in Afghanistan.

Brian Bonner, Chief Editor, Kyiv Post: Russia’s war in response to the success of the Euromaidan Revolution ranks as the most important single event in independent Ukraine’s modern history. The Russian military invasion galvanized Ukrainian public opinion, convincing the nation that the Kremlin is the major threat to its survival and that Ukraine’s future lies in a Western-style democracy. Good riddance to the myth of “Slavic brotherhood.”

Andreas Umland, Research Fellow, Swedish Institute of International Affairs: Post-Soviet Ukraine’s most important achievement has been the conclusion of an Association Agreement with the European Union. The 2004 Orange Revolution was a precondition for Kyiv to start negotiations with Brussels, while the 2013-14 Revolution of Dignity was crucial in order to finally sign the EU deal.

Ukraine’s two people power uprisings were necessary but not sufficient conditions for the pact’s adoption in September 2014 and ratification by July 2017. Once the process is complete, full implementation of the agreement will arguably serve as sufficient to begin Ukraine’s accession process towards future EU member status.

Olena Halushka, board member, AntAC: I would not want to underestimate the importance of events such as the proclamation of independence itself or the adoption of the Ukrainian Constitution as milestones in Ukraine’s nation-building journey.

However, if I have to single out one specific event, I would chose the Revolution of Dignity and the killing of the Heavenly Hundred. I think this was a real turning point for Ukraine. The image of those brave people armed with wooden shields sacrificing themselves in defense of a free and democratic Ukraine opened up an entirely new chapter in Ukrainian history and generated unprecedented solidarity among Ukrainians.

After Russia invaded Ukraine, thousands of volunteers joined the army or began organizing fundraising efforts. Communities all over Ukraine accommodated more than a million displaced people who had been forced to flee their homes as a result of the conflict and start new lives from scratch.

The Revolution of Dignity also initiated a comprehensive democratic transformation in the way Ukraine is governed and managed, allowing us to boost our defense capabilities, strengthen the rule of law, begin to tackle corruption, and address the long overdue task of decommunization, while also pursuing the long-term objective of Euro-Atlantic integration.

The challenge now is to maintain the momentum generated by the Revolution of Dignity and keep Ukraine firmly on the path of change. This is the best tribute we can pay to the Heavenly Hundred and the thousands who have since given their lives defending Ukraine against Russian aggression.

Taras Kuzio, Professor, National University of Kyiv-Mohyla Academy: For me personally, the most memorable event was to see the return of my father and other members of the Ukrainian diaspora to an independent Ukraine. My father belonged to what I would call the golden generation of interwar Ukrainians who grew up in western Ukraine and experienced successive Polish, Nazi, and Soviet occupations.

This golden generation, whether living under Soviet rule or in the free world in the diaspora, always believed Ukraine would one day become an independent state. They worked tirelessly towards this goal while in exile. Most arrived in their adopted countries with nothing but their patriotism. Nevertheless, they succeeded in establishing Ukrainian organizations, churches, and media, voluntarily giving up their time and investing their energy. They built free Ukrainian communities throughout the Western world, relentlessly lobbied governments, demonstrated weekly outside Soviet diplomatic buildings, wrote articles and letters to newspapers, and prepared reports.

In the 1990s, many members of the Ukrainian diaspora including my father and father-in-law were finally able to visit Ukraine. The golden generation always warned us that Russia would never be reconciled to Ukrainian independence. The 2014 crisis and ongoing conflict are proof of how right they were. Most of the golden generation did not live to see the thirtieth anniversary of an independent Ukraine, but we should never forget their courage, determination, and patriotism, or the role they played in helping to bring about Ukraine’s independence.

Volodymyr Yermolenko, Chief Editor, UkraineWorld.org: I think the Revolution of Dignity was the single most important event in modern Ukrainian history. In a more general sense, I would point to “Maidan” as a uniquely Ukrainian phenomenon that saw expression in the 1990 Revolution on Granite and 2004 Orange Revolution, which also took place on Kyiv’s Maidan Nezalezhnosti (Independence Square).

There are three reasons why the Revolution of Dignity was so important. It reconfirmed Ukraine as a civic nation able to mobilize and protest against abuses of power. This is why today’s Ukraine is such a crucial country for the whole of Eastern Europe, as it serves as a barrier against authoritarian trends in the region. Despite many differences in opinion, most Ukrainians share a common instinct to protest against injustice. This has become a foundational political value for independent Ukraine.

The Revolution of Dignity enabled Ukrainians to overcome ideological differences. It created common ground between patriots, liberals, conservatives, and leftists. It also demonstrated that modern Ukraine is a political rather than ethnic or religious community. The revolution brought Russian-speakers and Ukrainian-speakers together in a spirit of solidarity along with Orthodox believers, Greek Catholics, Muslims, Jews, and people from a variety of other backgrounds.

How modern Ukraine was made on Maidan

Since 1991, Ukraine’s two post-Soviet Maidan revolutions have helped define the country as an emerging democracy that seeks to escape from the orbit of authoritarian Russia and embrace Euro-Atlantic integration.

UKRAINE AT 30: What is independent Ukraine’s greatest achievement?

Ukraine marks 30 years of independence this week with much to celebrate and plenty to regret. The Atlantic Council invited a range of experts to share their thoughts on independent Ukraine’s greatest achievements.