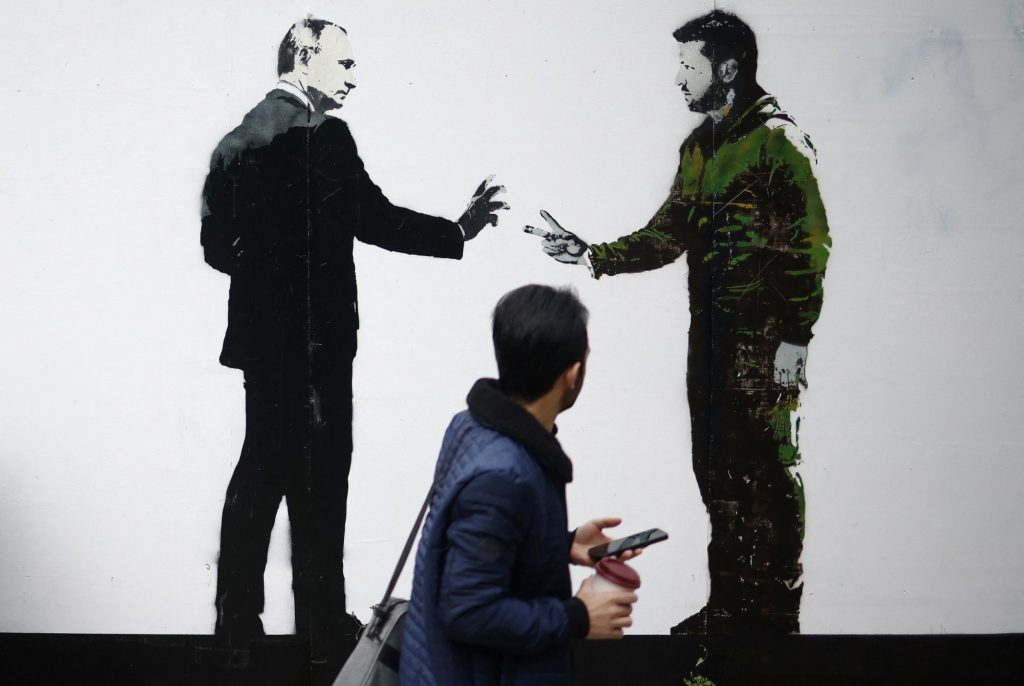 Ukraine should get real and agree to a ceasefire with Russia. An uncomfortable peace is better than continuing this horrific war, even if that means allowing Russia to keep the Ukrainian lands it currently occupies and perhaps has some right to.

This is the essence of the deeply flawed argument put forward by US tech billionaire Elon Musk on social media in recent days. Musk garnered headlines for his Kremlin-friendly peace proposals, but in reality he is merely one of many voices in the West calling on Ukraine to abandon millions of its citizens to perpetual Russian occupation in order to end Europe’s biggest armed conflict since World War II.

Ever since the early days of Vladimir Putin’s invasion, advocates of appeasement have pushed the idea that Ukrainian political and territorial concessions are the only way to end Russian aggression. These arguments ignore the genocidal reality of the war while denying agency to Ukrainians and relying on flawed assumptions of Russia’s behavior and capabilities.

Russia has not put forward a single sensible peace plan since the invasion began on February 24. Moreover, Moscow has rejected Ukraine’s proposals. During the initial stage of the war, Ukraine offered to abandon NATO membership and make further concessions to the Kremlin, but Putin preferred to proceed with his bid to seize Kyiv.

Despite multiple military setbacks, Moscow’s position has hardened over the intervening months, with Putin essentially demanding Ukraine’s capitulation and insisting that any settlement must include the surrender of entire Ukrainian regions to Russia. Such imperial posturing cannot serve as the basis for serious negotiations.

The idea that Ukraine should be willing to trade some of its regions in exchange for peace might make sense in the abstract. This is especially true for those who believe Russia’s policymakers remain fundamentally rational actors who are merely seeking greater security for their own state. However, this logic ignores the crimes committed under Russian occupation and the genocidal agenda underpinning the entire invasion.

When the Russian army retreated from northern Ukraine in the second month of the war, advancing Ukrainian troops encountered widespread evidence of war crimes in the formerly occupied suburbs of Kyiv including mass executions and large-scale sexual violence against women, men, and children. Similar revelations in other liberated regions and testimonies of people who have fled occupied Ukraine indicate that these crimes are a deliberate feature of Russia’s so-called Special Military Operation.

In areas of Ukraine currently under their control, Russian forces are terrorizing the civilian population. Millions of Ukrainians have been subjected to forced deportation to the Russian Federation, with special laws adopted in Moscow to allow for the Russification of Ukrainian orphans. Children who remain in regions of Ukraine under Russian control are forced to undergo indoctrination in schools, with teachers imported from Russia to impart distorted histories. Meanwhile, the Ukrainian language is being eradicated from public life along with all symbols of Ukrainian statehood. Ukrainian media outlets are blocked and residents are pressurized to accept Russian citizenship.

More than seven months since the invasion began, it is now impossible to escape the conclusion that Russia aims not only to extinguish Ukrainian statehood but also to eradicate Ukrainian national identity wherever it is able to establish its authority. When proponents of a supposedly realistic peace agreement call on Ukraine to cede territory, they are actually asking Ukraine to accept genocide. Plainly, no Ukrainian leader could ever agree to a peace deal that consigned the civilian population to such a fate.

Nor do most Ukrainians share Elon Musk’s belief that they have no option but to compromise with the Kremlin. As a result of Russian aggression, Ukrainian national identity has never been stronger. Record numbers of Ukrainians back Euro-Atlantic integration, while recent military successes have further strengthened Ukrainian resolve to liberate all Russian-occupied regions of the country.

Elon Musk and other self-styled realists fail to grasp that Russia currently has far more reason than Ukraine to seek an off-ramp from the conflict, even if it may be hard to swallow for Russians. Russia is now clearly losing the war and has suffered a string of humiliating defeats on the eastern and southern fronts over the past month. Ukrainian forces are receiving some of the best weapons in the world along with the financial, intelligence, and military support of NATO and other global partners. Ukrainian morale is high, with soldiers fighting to free their homeland and their families from occupation.

Russia, on the other hand, is in increasingly dire straights. Putin has launched Russia’s first mobilization campaign since World War II in order to compensate for staggering battlefield losses. While the actual number of Russian soldiers killed in Ukraine remains a closely guarded secret, even the most conservative estimates put the figure in the tens of thousands. The Russian military has also lost huge amounts of equipment in Ukraine including more than 1000 tanks. Putin now finds himself forced to rely on nuclear intimidation in order to maintain the fearsome mystique of his once-vaunted army. Unsurprisingly, the remaining Russian forces in Ukraine are suffering from collapsing morale.

Meanwhile, the situation inside Russia is also deteriorating. Sanctions imposed in response to the invasion of Ukraine are hurting the economy, while travel restrictions are narrowing the horizons of ordinary Russians. An estimated 700,000 Russians have fled the country in the two weeks since mobilization was announced, inflicting further economic damage and fueling public discontent.

Ukraine is currently advancing simultaneously on multiple fronts against what is an increasingly poorly-armed and demoralized enemy. Furthermore, there is little reason to believe Russia can regain the battlefield initiative in the months ahead. With this in mind, it makes little sense to preach restraint or expect concessions from Kyiv.

Putin’s nuclear blackmail is the elephant in the room, of course. His threats must be taken seriously, but the West cannot allow nuclear saber-rattling to become a trump card that enables Russia to claim whatever territory it wants. Putin knows the specter of a nuclear strike frightens Western leaders and sparks whispers of ending support for Ukraine. If he succeeds, he will use the same tactic again and again. Others, too, will take note and draw the obvious conclusions.

The best response to these nuclear threats has come from the Ukrainians themselves. Officials in Kyiv have defiantly declared that while a nuclear strike would dramatically increase the costs of the war, it would not alter the eventual outcome. In other words, even if Putin crosses the nuclear threshold, he will not be able to prevent a Ukrainian victory. Western leaders should follow suit and make crystal clear that any nuclear escalation would have catastrophic consequences for Russia.

Ukrainians want peace, but not at any price. Crucially, they recognize that unless they are victorious, their homeland will cease to exist. Elon Musk and other proponents of land-for-peace proposals need to understand that the single best way to bring peace to Ukraine is by sending the weapons that will help secure a Ukrainian victory. There is no middle ground between Russia’s goal of destroying Ukraine and Ukraine’s own will to survive.

Ukraine is not standing in the way of peace. Nor is peace something that can be imposed on Ukraine by the country’s Western partners. Anyone who genuinely wants to bring the Russian invasion to an end should focus on pushing the international community to give Ukrainians the tools they need to defend themselves. Until Russia is decisively defeated, the war in Ukraine will go on and the suffering of Ukrainians will continue.

Doug Klain is a nonresident fellow at the Atlantic Council’s Eurasia Center. Find him on Twitter @DougKlain.