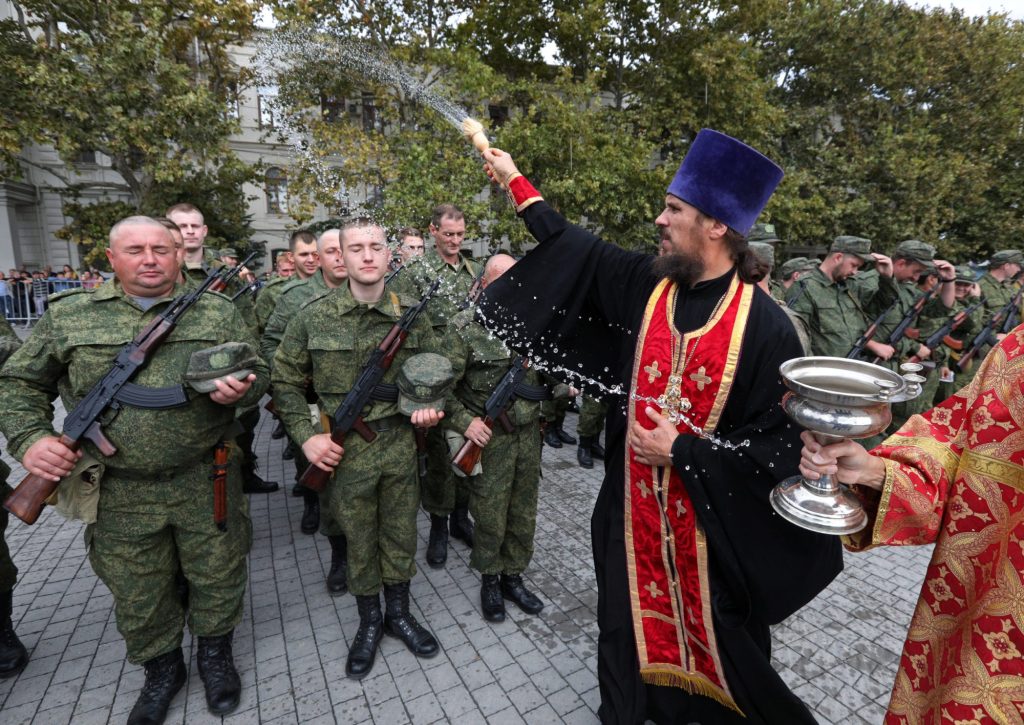 Vladimir Putin’s decision to order Russia’s first mobilization since World War II is fueling fears in neighboring Belarus that the country could once again become a focal point for the ongoing invasion of Ukraine.

With hundreds of thousands of Russians now being called up for military service, there are growing concerns that Moscow may send a significant portion of these newly mobilized forces to Belarus in order to launch a second assault on Kyiv. Russian troops marched on the Ukrainian capital from Belarus during the first month of the invasion in early 2022 but suffered heavy losses and were forced to retreat. Nevertheless, the capture of Kyiv remains central to Putin’s goal of extinguishing Ukrainian statehood.

Belarus dictator Alyaksandr Lukashenka has played a supporting role in the attack on Ukraine ever since the weeks preceding the February 24 invasion. He allowed his country to serve as a gateway for invading Russian troops, and has also permitted Russia to launch air raids and missile strikes against Ukrainian targets from Belarusian territory.

This role has not been entirely voluntary. For the past two years, Lukashenka has depended on the Kremlin for his political survival after Putin intervened in 2020 to save his neighbor when Belarus was rocked by anti-regime protests. In exchange for Moscow’s support, Lukashenka has agreed to abandon his earlier criticism of Russian aggression against Ukraine and has instead become something of a junior partner in Putin’s war.

Despite this limited room for maneuver, Lukashenka has so far managed to avoid direct involvement in the war and has resisted Kremlin pressure to send the Belarusian army into Ukraine. In public, he has played down his involvement in the conflict and has instead sought to portray himself as a potential peacemaker, telling the Associated Press during a May interview, “I want to stress one more time: I feel like this operation has dragged on.”

At the same time, Lukashenka remains one of Putin’s most frequent guests and appears obliged to regularly demonstrate his loyalty. On September 28 he visited Abkhazia, a region of Georgia controlled by the Kremlin and recognized by Russia as an independent state. This controversial visit was downplayed by the Belarusian state media but was widely interpreted as the price of Putin’s continued backing. The next test will be whether Lukashenka officially recognizes Russian attempts to annex Ukraine’s Donetsk, Luhansk, Kherson, and Zaporizhzhia regions.

If Russia does decide to deploy large numbers of troops to Belarus with a view to opening up a new northern front in the invasion of Ukraine, Lukashenka would find himself under enormous pressure to crush any domestic dissent. During the initial stages of the war when Russia used Belarus as a key staging post for the invasion, grassroots Belarusian opposition included cyber-attacks and a group known as the railway partisans who sabotaged the country’s train network to disrupt the transit of Russian troops and military equipment.

In May, Lukashenka responded to this sabotage campaign by introducing the death penalty for partisan attacks on railways. While repressive measures against political opponents are regarded as routine in today’s Belarus, the crackdown would likely intensify significantly if the country plays host to a new Russian invasion force in the coming months.

There are also fears that Lukashenka may order mobilization in Belarus itself if pressured to do so by Putin. According to recent data from Narodny opros, which surveys opposition supporters in Belarus, 40% are already concerned about the possibility of a mobilization, while 67% believe mobilized men would either flee the country or go into hiding rather than joining the military.

Any attempt to force Belarusians to join the invasion of Ukraine would be fraught with dangers for the Lukashenka regime. An August 2022 poll conducted by Chatham House found that just 3% of Belarusians supported their country’s participation in Russia’s war. Numerous experts have argued that currently serving Belarusian military personnel would either refuse orders to invade Ukraine or would switch sides and join the Ukrainians. Meanwhile, exiled opposition leader Sviatlana Tsikhanouskaya has recently called on military officers and other personnel of the Belarusian army to sabotage any offensive actions and report plans for mobilization to the independent media.

While Belarusians worry about their country being dragged into Putin’s faltering invasion, some Russians who are seeking to avoid a similar fate are making their way to Belarus. The most popular destinations for draft-dodging Russians appear to be Georgia, Armenia, and Kazakhstan, but anecdotal evidence indicates significant numbers of Russians are also using Belarus as a safe haven or transit point for destinations within the EU.

This has not gone unnoticed by the authorities. Details have emerged in recent days of an enhanced law enforcement presence on the streets of Minsk in order to detain Russian citizens fleeing mobilization. On September 27, five Russian men were reportedly removed from a train entering Belarus. This would seem to indicate that Lukashenka has agreed to aid Putin in rounding up draft-dodgers and returning them to Russia.

It is not yet clear whether Putin’s decision to proceed with mobilization will once again place Belarus at the heart of Russia’s Ukraine invasion. Any attempt to launch a new assault on Kyiv via Belarus would likely encounter domestic opposition and could create a range of new threats for Lukashenka’s fragile regime. Nevertheless, with Russia now clearly losing the war and Putin increasingly desperate to regain the initiative, Lukashenka may ultimately find himself with little choice but to support his patron.

European unity will be vital in the coming months as Russia attempts to weaponize winter in order to convince EU leaders to abandon their support for Ukraine and end their opposition to Vladimir Putin’s ongoing invasion.

Image: An Orthodox priest conducts a service for reservists drafted as part of the partial mobilization, during a ceremony of their departure for military bases, in Sevastopol, Crimea. September 27, 2022. (REUTERS/Alexey Pavlishak)