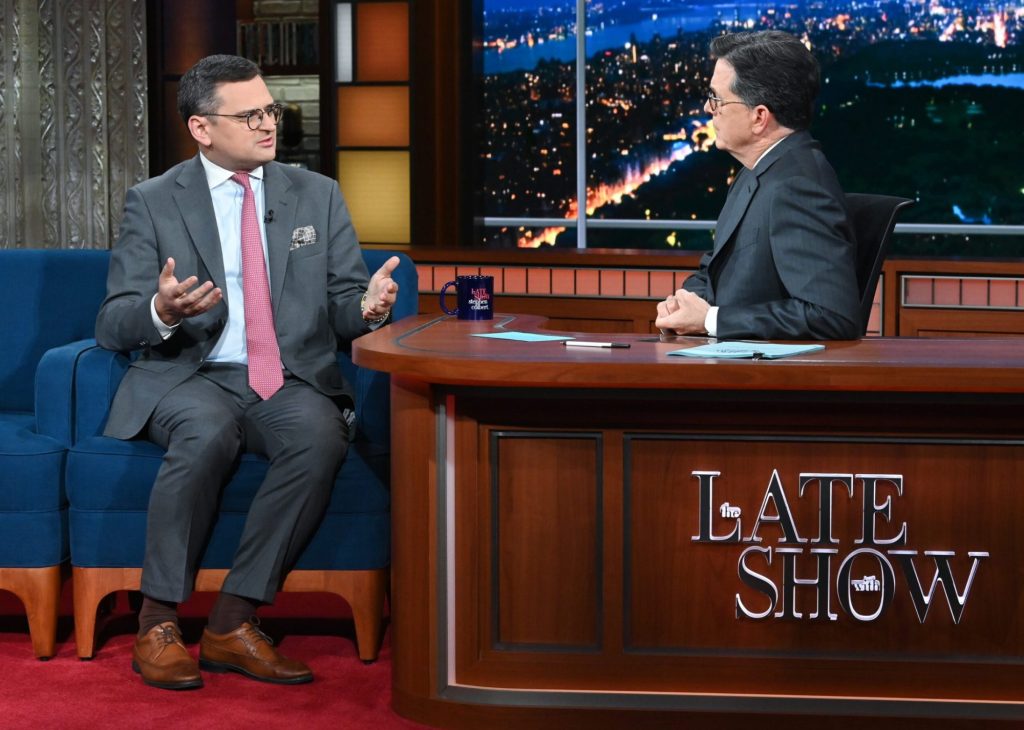 Just hours after Kuleba’s instantly viral one-liner hit social media, he was starring on The Late Show with Stephen Colbert. Ukraine’s top diplomat received a rousing reception on the flagship US talk show, including a standing ovation from the studio audience in honor of the Ukrainian people and the country’s armed forces. Speaking with dignity, candor, and a dash of humor, Kuleba concisely expressed Ukraine’s view of the Russian invasion in a nine-minute interview that was hailed as a masterclass in public diplomacy.

The Ukrainian Foreign Minister’s strong showing in New York was a good example of the innovative approaches that are enabling Ukraine to gain the upper hand over Russia on the diplomatic front. In many ways, this confrontation is a generational clash between two very different diplomatic schools. While Russia is still represented by a Soviet-era generation of diplomats epitomized by 72-year-old Cold War veteran Sergei Lavrov, Ukrainian diplomats who came of age in the post-Soviet era are embracing new methods and achieving considerable success.

Ukraine’s wartime diplomacy has already delivered numerous significant results. These include securing the largest military support for any ally since World War II, along with unprecedented sanctions against Russia and other measures to increase Moscow’s international isolation. With the war now in its eighth month, the broad alliance of international partnerships created and nurtured by Ukrainian diplomats shows no signs of weakening.

One key feature is empowerment. I first met Dmytro Kuleba when he was an advisor to the Ukrainian President a few years before his 2020 appointment as the country’s Foreign Minister. At the time, he gave the impression of a thoroughly modern person. It was also clear that Kuleba feels entirely at home as a manager of issues, relationships, and teams. In concert with Ukraine’s Defense Ministry, he appears to be providing explicit direction to Ukraine’s diplomats in the form of specific, country-based military support goals. This approach is combined with an expectation of proactivity on the part of individual ambassadors.

Thirty years after Ukraine’s independence, Kuleba is presiding over the final dismantling of the inherited Soviet diplomatic corps, which was notoriously clunky, bureaucratic, and sometimes truly under-skilled. Amid the pressure and pace of a full-blown war, a new organizational culture is emerging at the Ukrainian Ministry of Foreign Affairs that includes self-belief, positivity, and an emphasis on initiative.

Savvy communication is at the heart of Ukraine’s diplomatic progress. As part of their empowerment, Ukraine’s current generation of diplomats have strong license to communicate. Ministry officials in Kyiv and Ukrainian ambassadors around the world are now routinely using a wide array of contemporary channels including social media, traditional mass media, stakeholder relations, and cultural ties in order to build Ukraine’s image and articulate the country’s wartime needs. The innovative and often unorthodox use of social media by Ukrainian officials has won particular praise.

Ukraine’s clever communication is very sensitive to the cultural norms and expectations of individual audiences. Ukrainian Ambassador to Australia Vasyl Myroshnychenko noted recently that media skills are now central to successful diplomacy. “The impact of the full-scale Russian invasion on Ukraine’s diplomacy can be compared to the influence of COVID-19 on digital transformation,” he commented. “One of the key changes has been in the communications sphere. The ability of our ambassadors to provide compelling arguments for why a host nation should support Ukraine has played an important role in rallying military assistance. Being media savvy and fully proficient in the local language is no longer just an advantage. It is a must at times of war.”

Ukraine’s diplomatic engagement with partner governments and international audiences is particularly important in terms of the struggle against Russian disinformation. While Russian embassies often serve as hubs for anti-Ukrainian fakes and efforts to weaken Western unity, Ukraine’s diplomatic corps has framed its communication as accessible, reasonable, fact-based, and engagingly human. Today’s Ukrainian diplomats are not afraid to demonstrate a sense of humor or employ pop culture references in ways that would have shocked their stuffy Soviet predecessors.

This positive framing of Ukraine, Ukrainians, and their future is attractive and encourages international audiences to engage. Modern communications studies consistently show that how you communicate, especially in terms of tonality and timing, is as important as the actual message you are communicating. This is a lesson Ukrainian diplomats have clearly learned.

Ukraine’s wartime embrace of public diplomacy has been particularly striking. The country’s diplomats are now regularly in newspapers, on TV, at conferences, and in corporate boardrooms articulating their country’s needs and making the case for further support. This approach is designed to reach not only political partners, policy experts, and diplomatic representatives, but also the general public. Ukraine’s emphasis of public diplomacy reflects an awareness that public opinion in democracies is critical to maintaining policy support.

The success of Ukraine’s wartime diplomacy is rooted in the same progressive values that are helping the country to advance on the battlefield and as a young democracy. These values reflect a nation that feels increasingly at ease with itself and confident of its position as part of the wider democratic world. Ukrainian diplomats are winning because they have a winning story to tell and the skills to do so effectively. Their progress mirrors Ukraine’s historic coming of age over the past seven months and captures the spirit of a country that is finally finding its voice on the international stage.

Pete Shmigel is an Australian writer with a background in politics, mental health, and Ukrainian issues.