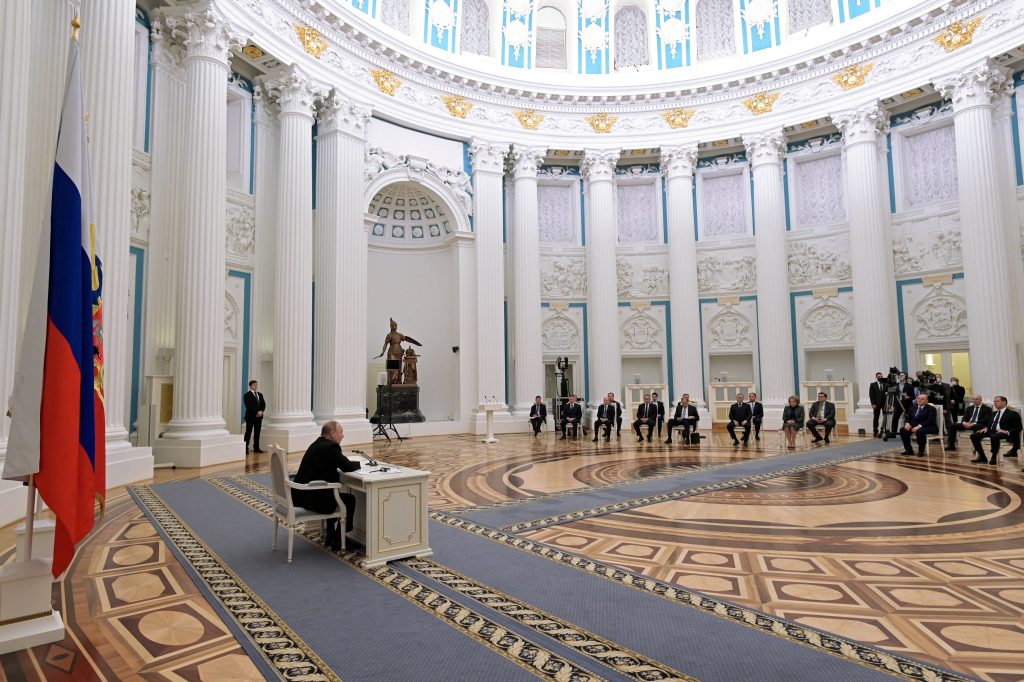 Almost exactly eight years to the day since he first ordered the invasion of Crimea, Vladimir Putin struck another blow in his war against Ukrainian statehood on February 21 by officially recognizing the two so-called separatist republics of eastern Ukraine as independent states.

Putin announced his decision to recognize the republics following a day of political theater in the Kremlin. The first act was an emergency session of Russia’s National Security Council held in the surreal atmosphere of a Stalinist show trial, with a who’s who of senior regime figures lining up to parrot propaganda slogans and denounce imaginary acts of Ukrainian aggression.

The main event was Putin’s televised evening address, which quickly turned into a breathless and highly emotional rant against all things Ukrainian. The Russian leader spent most of his nearly one-hour speech condemning Ukraine’s alleged faithlessness and questioning the legitimacy of Ukrainian statehood. Many of the talking points echoed Putin’s notorious July 2021 essay on the same subject, but the vitriol and contempt of his delivery was nevertheless chilling.

The Russian President’s decision to recognize the separatist republics drew immediate condemnation from the international community, with Western leaders vowing fresh sanctions and declaring that the move signals an end of the Minsk peace process. However, Moscow’s recognition of the republics does not qualify as direct military aggression and is therefore not expected to trigger the full weight of the unprecedented sanctions that have been prepared in the event of a full-scale Russian invasion.

Recognition of the republics will serve to further increase tensions around Ukraine. Since October 2021, Putin has encircled the country on three sides with a potential invasion force numbering approximately 200,000 troops along with a vast array of firepower. This unprecedented Russian military build-up has sparked fears of the largest European conflict since World War II.

It is not immediately clear what Russian recognition of the separatist republics will mean for the military situation on the ground in eastern Ukraine. Russia has maintained a significant unofficial military presence in the region since the outbreak of hostilities in spring 2014, but has consistently denied involvement in the conflict.

Today’s decision marks an end to this eight-year charade of Kremlin denials and paves the way for the open deployment of Russian forces in far greater numbers. Within minutes of the signing ceremony granting official recognition, a Russian peacekeeping mission to eastern Ukraine was announced.

A key question will be Russia’s interpretation of the boundaries of the republics. The two territories each currently occupy around one-third of the Ukrainian administrative regions where they are located, but both lay claim to their entire regions. If Moscow chooses to enforce these expanded borders, this would bring Russia into direct conflict with the bulk of the Ukrainian Armed Forces, which is currently deployed along the front lines in eastern Ukraine.

There are also concerns that Moscow may soon seek to repeat the hybrid warfare tactics employed earlier in its campaign against Ukraine and launch an offensive using Russian troops posing as separatists. While such a ruse would be unlikely to fool many, past experience indicates that it would probably create sufficient legal ambiguity to avoid the most painful sanctions measures.

The move to recognize the republics is the latest escalation in Putin’s eight-year war against Ukrainian statehood. Hostilities began on February 20, 2014, when Putin first gave the order to seize Ukraine’s Crimean peninsula. Weeks later, Kremlin agents attempted to orchestrate a series of pro-Russian uprisings throughout southern and eastern Ukraine, only to be thwarted by unexpectedly strong local opposition.

Moscow’s only successes in mainland Ukraine came in Donetsk and Luhansk, which emerged in spring 2014 as the capitals of two self-styled separatist republics. In reality, these “People’s Republics” were created by the Kremlin and led by Russian nationals who remained in charge for a number of months until their presence became an embarrassment.

In a late 2021 interview, former “separatist leader” and current Russian MP for Putin’s own United Russia party Alexander Borodai recalled the Russian origins of the so-called separatist republics. “I am from Moscow. My first deputy was from Moscow. The power ministries were controlled by Muscovites, and defense minister Igor Strelkov (Igor Girkin) was also from Moscow. It was a little too blatant from a propaganda perspective,” he noted.

Fighting raged in eastern Ukraine throughout 2014 and early 2015 before settling into a bloody stalemate along a more or less stable 400km front line marked by sporadic artillery engagements and frequent sniper fire. Over the past seven years, efforts to reach a sustainable peace settlement have proven futile, with Russia refusing to even acknowledge its participation in hostilities and Ukraine unwilling to accept a Kremlin-friendly interpretation of the 2015 Minsk Accords that would leave the country’s future sovereignty in jeopardy.

With the Minsk Accords now apparently off the table and Russia officially taking control of the east Ukrainian republics, there is significant potential for a major escalation in the simmering conflict that could pave the way for a more general Russian offensive aiming to occupy large parts of Ukraine.

Many analysts remain skeptical about the prospects of a full-scale invasion, pointing to the sheer size of the country and the high costs Ukrainians would be likely to inflict on a Russian occupation force. However, anyone who sat through Vladimir Putin’s long and delusional anti-Ukrainian diatribe tonight would be left in no doubt over the scale of the Russian leader’s Ukraine obsession. He clearly views the reconquest of the country as an historic mission that will define his reign. As columns of Russian troops roll into eastern Ukraine tonight, this obsession now represents the greatest single threat to world peace.

With Russia facing the possibility of crushing sanctions over the threatened invasion of Ukraine, Putin may prefer to deploy hybrid forces made up of regular Russian troops and mercenaries posing as Ukrainian separatists.