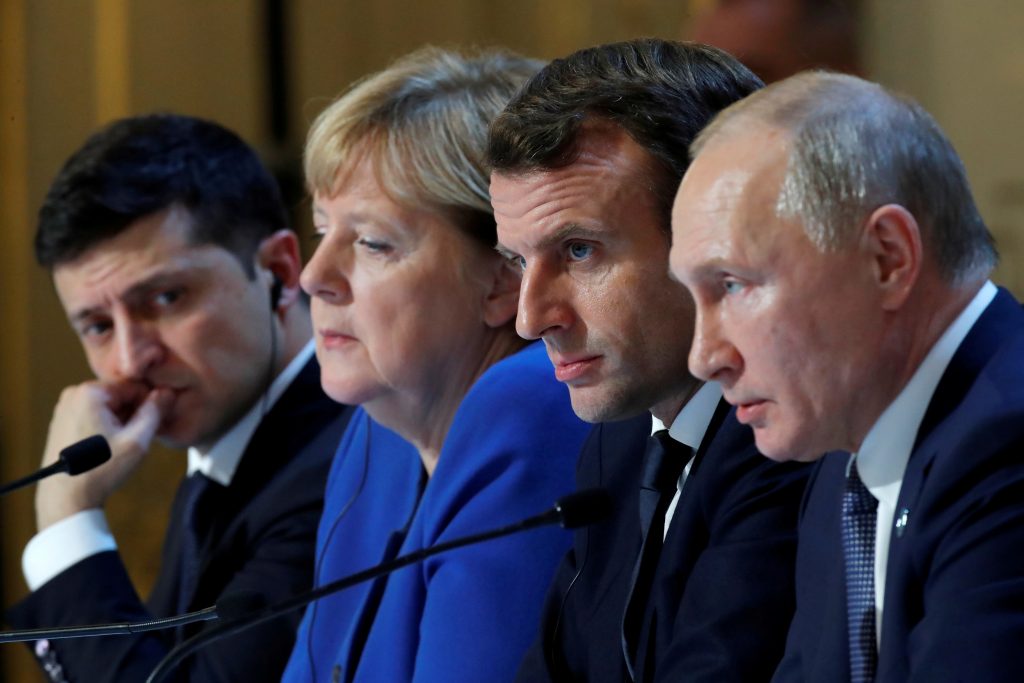 Ukrainian diplomats have raised the alarm this week over news of Russian plans to hold Ukraine peace talks without Ukraine’s participation. The Kremlin gambit has revived concerns that Moscow aims to bypass Kyiv and reach agreement directly with the West over Ukraine’s geopolitical future.

Speaking in Moscow on March 29, Kremlin Spokesperson Dmitry Peskov confirmed to reporters that preparations were currently underway for a video conference between Russian President Vladimir Putin and fellow Normandy Format leaders German Chancellor Angela Merkel and French President Emmanuel Macron, with the conflict in Ukraine set to feature prominently on the trilateral agenda. Peskov stated that Ukrainian President Volodymyr Zelenskyy would not be invited to join the talks.

Together with Ukraine and Russia, Germany and France make up the quartet of countries involved in the Normandy Format of negotiations to resolve the ongoing conflict in eastern Ukraine. The format takes its name from an initial meeting held in northern France’s Normandy region in June 2014 during commemorative events to mark the seventieth anniversary of the WWII D-Day landings.

“Our position is clear: nothing about Ukraine without Ukraine,” stated Ukraine’s Ministry of Foreign Affairs Spokesperson Oleg Nikolenko in response to news of the new Russian initiative. “Only the full Normandy Format offers the prospect of progress towards resolving the Russian-Ukrainian armed conflict. Ensuring a comprehensive ceasefire is the priority.”

“Nothing about Ukraine without Ukraine” has remained one of the cornerstones of Kyiv’s approach towards peace talks ever since the outbreak of hostilities seven years ago. The mantra reflects fears in the Ukrainian capital that Russia will seek to strike a “grand bargain” with other leading world powers before presenting the outcome to Ukraine as a fait accompli.

Any suggestion of peace talks taking place without Ukraine’s involvement inevitably sparks uncomfortable memories of the 1938 Munich Agreement, which saw Britain and France accede to Adolf Hitler’s territorial demands against Czechoslovakia in a bid to avoid a new European conflict.

This Munich betrayal has come to be seen as the most notorious example of the appeasement policies that fueled Nazi Germany’s revisionist aggression during the late 1930s and ultimately led to the outbreak of WWII. Faced with the modern-day revisionist aggression of Putin’s Russia, Ukraine has been determined since 2014 to avoid the fate of the Czechoslovakians, who were famously excluded from the talks that led to the dismemberment of their country.

Russia’s current attempt to stage talks with Merkel and Macron but without Zelenskyy will reawaken concerns over the possibility of Ukraine being relegated to the sidelines of the peace process. This comes at a time when negotiations to end the seven-year conflict appear to have reached a stalemate.

The first efforts to deescalate the crisis took place in Geneva in April 2014 and featured the participation of Russia, Ukraine, the US, and the European Union. These talks proved fruitless and were followed by the creation of the Normandy Format less that two months later. The leaders of France and Germany then joined their Russian and Ukrainian counterparts in Belarusian capital Minsk for two summits in September 2014 and February 2015, which led to the signing of the Minsk agreements outlining a road map towards peace.

The second Minsk summit in early 2015 brought major combat operations in eastern Ukraine to an end, but sporadic fighting has continued. Meanwhile, rival interpretations of the sequencing for the numerous steps outlined in the Minsk agreements has prevented progress towards implementation, with Ukraine calling for practical revisions and Russia pushing for a rigid application that would likely leave the currently occupied parts of eastern Ukraine under effective Kremlin control.

With hopes fading for a compromise agreement between Russia and Ukraine, Moscow has rejected repeated attempts by Kyiv over the past year to schedule a new Normandy Format summit with the leaders of France and Germany. The Kremlin also stands accused of blocking the work of the Trilateral Contact Group, which seeks to coordinate the details of a diplomatic solution to the conflict.

The strongest single indication that Russia does not seek a viable peace with Ukraine remains the spring 2019 decision to offer a fast track route to Russian citizenship for millions of Ukrainians living in the Kremlin-occupied eastern regions of the country. This step, which was unveiled in the immediate aftermath of Volodymyr Zelenskyy’s presidential election victory, aims to transform the areas currently under Kremlin control into long-term Russian passport protectorates. By granting Russian citizenship to local residents in eastern Ukraine, Moscow has dramatically reduced the chances of ever returning these regions to full Ukrainian control.

News of Putin’s plans to engage France and Germany while isolating Ukraine underlines the Normandy Format’s failure to facilitate meaningful progress towards peace. This latest Russian initiative will increase calls for a rethink of the current negotiating format, with many senior figures in Kyiv already seeking a greater role for the United States.

In a February 2021 article for the Atlantic Council’s UkraineAlert Service, the Head of the Presidential Office of Ukraine, Andriy Yermak, argued for direct American involvement in the search for peace. “It is vital for the US to become fully engaged in the negotiation process under the Normandy and Minsk frameworks. A coordinated approach between the US, the EU, and Ukraine is indispensable.”

The choice facing the international community is not merely one between a peace settlement and a frozen conflict. In recent weeks, Russia has demonstrated its readiness to escalate the fighting in eastern Ukraine by launching a series of attacks. On March 26, four Ukrainian soldiers were killed during one of the deadliest Russian assaults of the past year. This brought the Ukrainian military death toll since the start of 2021 to 16 and left faint hopes generated by a July 2020 ceasefire in tatters. With the Russian military heavily concentrated close to the Ukrainian border and in occupied Crimea, the prospect of a full-scale invasion remains impossible to rule out.

As Moscow looks to freeze Ukraine out of the negotiating process and continue peace talks without Kyiv’s involvement, now might be a good time to explore radically new approaches to resolving Europe’s only ongoing armed conflict. For the past seven years, the Russo-Ukrainian War has been at the heart of rapidly rising tensions between Russia and the Western world. Until it is brought to an end, it will continue to poison international relations.