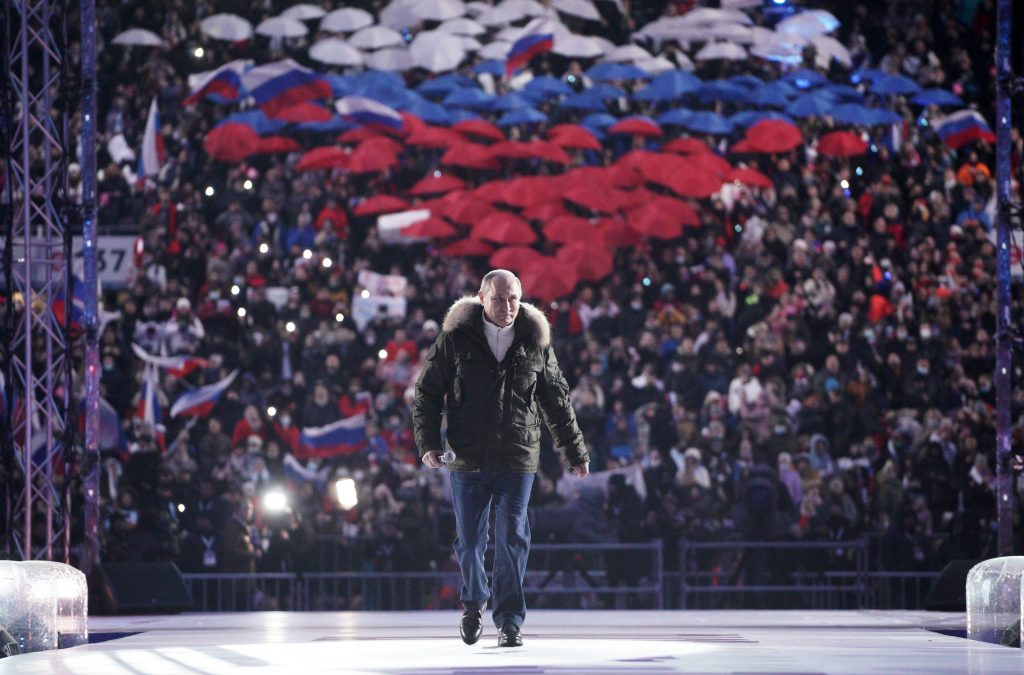 When Volodymyr Zelenskyy won the Ukrainian presidency two years ago, his election owed much to promises of ending the country’s undeclared war with Russia. Many of Zelenskyy’s supporters hoped the charismatic comic and political outsider would be able to move beyond the hostility that had poisoned bilateral ties since 2014 and reach a negotiated settlement with Vladimir Putin.

He certainly seemed to be cut out for such a role.

In contrast to the vocal patriotism of his predecessor Petro Poroshenko, Zelenskyy had made a name for himself as a Russian-speaking Ukrainian celebrity with a following throughout the former USSR. He boasted a Kremlin-friendly record of repeatedly poking fun at the symbols of Ukrainian national identity throughout his comedy career.

Prior to entering politics, many of Zelenskyy’s TV and movie projects had been geared primarily towards the lucrative Russian market, while he had personally spent a significant portion of his working life in Russia collaborating with Russian colleagues. In other words, Zelenskyy’s worldview and professional activities both appeared to confirm Kremlin claims regarding Ukraine’s natural place within the wider Russian World.

This background makes Zelenskyy’s recent actions all the more surprising. In the first few months of 2021, the Ukrainian President has shut down three Kremlin-linked Ukrainian TV channels and slapped sanctions on Vladimir Putin’s closest Ukrainian ally, Viktor Medvedchuk. He has also targeted pro-Russian MPs within his own parliamentary party and adopted a noticeably more strident tone in his public declarations regarding Russian aggression and Ukraine’s Euro-Atlantic ambitions.

What is behind Zelenskyy’s apparent transformation? The short answer is that he has belatedly recognized the futility of seeking common ground with the Kremlin.

This was not for want of trying. During the first year-and-a-half of his presidency, Zelenskyy made numerous concessions to Moscow. These included the withdrawal of Ukrainian troops from key strategic positions along the front lines in eastern Ukraine, and the introduction of measures restricting the Ukrainian military’s ability to respond to Russian attacks. Meanwhile, he consciously attempted to dial down tensions by employing ambiguous and euphemistic language to describe the conflict. This often meant avoiding any mention of Russia whatsoever.

Russia chose not to respond in kind to these goodwill gestures. On the contrary, the Kremlin has taken a number of steps since Zelenskyy’s April 2019 election that make the prospect of peace significantly more unlikely.

Russia has categorically rejected calls to revise the Minsk Accords and has repeatedly vetoed attempts to schedule a second Normandy Format summit of Ukrainian, Russian, German, and French leaders to follow on from an initial Paris meeting in December 2019. In recent months, Moscow has also effectively blocked the work of the Trilateral Contact Group, which seeks to coordinate the details of a diplomatic solution to the conflict. Throughout this period, the Kremlin-controlled Russian media has maintained a relentless drumbeat of vicious anti-Ukrainian propaganda and disinformation.

The single most egregious example of continuing Kremlin hostility has been Moscow’s decision to distribute Russian passports to Ukrainian residents in occupied eastern Ukraine. This policy, which was first unveiled in the days immediately following Zelenskyy’s election triumph, aims to transform the regions currently under Kremlin control into long-term Russian passport protectorates. By granting Russian citizenship to hundreds of thousands of local Ukrainian residents, Moscow has dramatically reduced the chances of ever returning these regions to full Ukrainian control.

Russia’s actions have succeeded in convincing Zelenskyy that his charm offensive is pointless and forced him to throw his full weight behind Ukraine’s Euro-Atlantic choice. He has learned a hard lesson that Vladimir Putin simply does not want peace with Ukraine.

To many observers, Putin’s reluctance to reciprocate has come as no surprise. While Zelenskyy’s own personal interactions with the worlds of Russian business and politics may have led to an unfortunate degree of wishful thinking, there are a number of compelling reasons why the Kremlin strongman dare not end his campaign of aggression against Ukraine.

Putin is well aware that if successful, Ukrainian democracy will prove highly contagious and could soon bring about the downfall of his own authoritarian regime. He remains haunted by the pro-democracy wave that swept through Soviet Central Europe in the late 1980s, and understands that Ukraine’s defection to the West could easily spark a similar process inside Russia itself. This was the key motivation behind Putin’s decision to use force in 2014, and it remains the main obstacle to peace.

Reaching a settlement with Ukraine would also entail withdrawing the illicit but considerable Russian military presence from the east of the country. After years of blanket denials, this retreat would expose the scale of Russia’s secret war and shatter what remains of the Kremlin’s international credibility. Once the Ukrainian authorities and international community were able to access the formerly occupied regions of eastern Ukraine, Moscow would likely find itself accused of war crimes and forced to answer all manner of awkward questions.

The most difficult questions of all may come on the home front, where Putin would have to explain why more than three hundred years of Russian dominance over Ukraine has finally come to an end. Many Russians still struggle to accept the entire notion of Ukrainian independence and prefer to regard the country’s separation from modern Russia as an accident of history. The ongoing war has postponed any official reckoning over the collapse of Russian influence in Ukraine, while also allowing Putin to blame everything on meddling foreigners and unrepresentative extremist elements. However, if peace is finally agreed, the reality of Ukraine’s departure from the Russian orbit and the country’s further Euro-Atlantic integration will soon become inescapable. From Putin’s perspective, this means that concluding peace with Ukraine is tantamount to recognizing the loss of Ukraine. That is not the kind of legacy the historically-minded Russian ruler seeks for himself, and makes an indefinite continuation of the current bloody stalemate all but inevitable.

Over the past two years, the failure of Zelenskyy’s peace efforts has dispelled any lingering illusions over the possibility of compromising with the Kremlin. Instead, it has forced Ukraine and the country’s international partners to accept the inevitability of a protracted confrontation.

There is a certain irony to this state of affairs. When he was first elected, Zelenskyy’s critics feared his alleged pro-Russian sympathies would lead to a disastrous reconciliation with Russia on the Kremlin’s terms. Instead, Zelenskyy himself has been obliged to acknowledge that Russia is an implacable enemy. Far from returning Ukraine to the Russian sphere of influence, his presidency looks set to confirm the finality of the geopolitical divorce between the two nations.