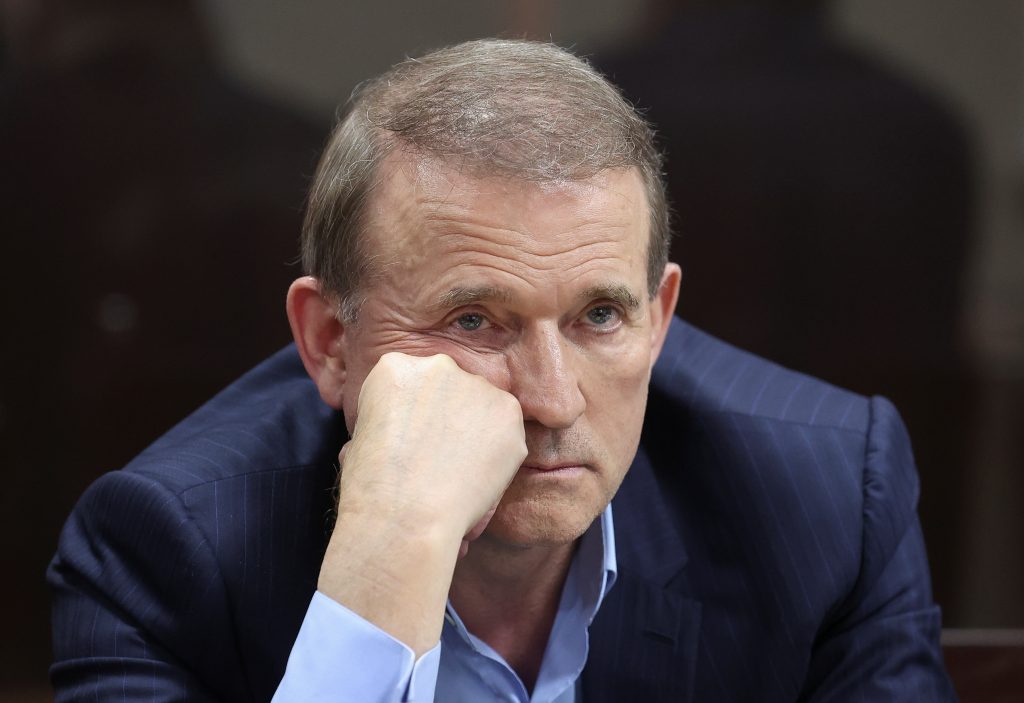 Ukraine’s leading pro-Kremlin politician, Viktor Medvedchuk, has been charged with treason and placed under house arrest as the Zelenskyy administration escalates its efforts to counter Russian influence in the country.

Medvedchuk faces up to fifteen years in prison if convicted. This week’s treason charge is the latest step in an ongoing campaign and comes following the February decision to block three Kremlin-tied Ukrainian TV channels believed to be controlled by Medvedchuk. Weeks after the channel closures, personal sanctions were imposed against the opposition politician and his wife.

Throughout the past seven years of undeclared war between Russia and Ukraine, Medvedchuk has made no secret of his Russian sympathies. On the contrary, he has frequently flaunted his close personal ties to Vladimir Putin, who is godfather to Medvedchuk’s daughter, and has held numerous face-to-face meetings with the Russian leader in Moscow.

Medvedchuk’s continued prominence in Ukrainian politics had previously led many to assume that he was somehow untouchable as an important intermediary between Kyiv and the Kremlin. However, President Zelenskyy appears to have decided this status no longer applies.

The targeting of Medvedchuk is a bold move that places the Ukrainian president in direct confrontation with Medvedchuk’s patron, Vladimir Putin. It is likely to play well with patriotic Ukrainians and among the country’s Western partners, but could lead to serious complications in the search for peace with Russia. What does the decision to charge Medvedchuk with treason mean for Ukraine?

Anders Åslund, Senior Fellow, Atlantic Council: On March 17, 2014, the United States sanctioned Viktor Medvedchuk for his role in Russia’s occupation of Crimea. Despite this, he continued pursuing big business in Ukraine. He allegedly purchased three television channels through a middleman, is a prominent member of the Ukrainian parliament, and even represented Ukraine in negotiations with Russia.

It was therefore reassuring that the Ukrainian National Defense and Security Council sanctioned him and his three television channels in February 2021. The legally correct procedure, of course, is that the prosecutor general charges him with high treason and illegal economic activities on territory occupied by Russia. Let us just hope that the Ukrainian judiciary possesses sufficient integrity to sentence him.

President Zelenskyy’s sanctioning of Medvedchuk has coincided with a rise in Zelenskyy’s popularity. The Ukrainian public appears to appreciate his firmer stand against Russian aggression, which has also brought him closer to the US administration. Putin, by contrast, now refuses to talk to Zelenskyy even on the phone. The Russian leader appears to have now adopted the same attitude towards Zelenskyy that he displayed with previous Ukrainian presidents Petro Poroshenko and Viktor Yushchenko.

Adrian Karatnycky, Senior Fellow, Atlantic Council: Viktor Medvedchuk, perhaps Ukraine’s most odious politician, has long been at the apex of Russia’s fifth column in Ukraine. Recent allegations and documentation concerning his vast business interests in Russia, and now, according to the Ukrainian government, in Russian-occupied Crimea, have revealed the mechanisms by which his extensive political, propaganda, and media activities in Ukraine were funded in collusion with the Russian government.

Russia is at war with Ukraine and occupies Ukrainian territory in Crimea and the Donbas. From this perspective, Medvedchuk’s businesses in Crimea, if the allegations are convincingly documented, represent not only a violation of the law, but an act of treason.

Medvedchuk’s legal woes will have an immediate impact on the Opposition Platform-For Life party he leads. Sanctions on and the freezing of his Ukraine accounts and businesses have already impacted the party’s funding. These measures are also forcing Opposition Platform politicians to decide whether they want to be part of Medvedchuk’s legally and politically toxic universe. By taking decisive actions to bring Medvedchuk down, Ukraine is significantly reducing the presence and impact of Russian propaganda and disinformation inside Ukraine.

Olena Halushka, Board Member, Anti-Corruption Action Center: As has often been said, the Kremlin and Ukraine’s own oligarch class are the main opponents of the country’s democratic transformation. Viktor Medvedchuk embodies both these threats. He was placed under US sanctions in 2014. It is shameful, although not particularly surprising, that Ukraine itself took seven more years before taking its own steps to counter Medvedchuk’s malign activities.

This treason case is yet another reminder of the need to reform Ukraine’s State Security Service (SBU). The relevant draft law is currently being considered in parliament. The proposed reforms require further amendments prior to a second reading. Proposals submitted by NATO, the US Embassy, and the EU Advisory Mission should be taken on board. The reformed SBU must have fewer law enforcement functions and a strengthened focus on the core tasks of counter-intelligence and counter-terrorism.

Looking ahead, the implications of Medvedchuk’s treason charges will depend on whether the eventual court ruling is fair. Ukrainian society is also expecting to see unbiased investigations into the country’s other oligarchs. This is the only way to convince a skeptical public that genuine de-oligarchization is finally underway in Ukraine.

Volodymyr Dubovyk, Associate Professor, Odesa Mechnikov National University: The decision to charge Medvedchuk with high treason has significant domestic and international implications. Domestically, it increases the pressure on Medvedchuk, who has been one of the most influential figures in Ukrainian politics for decades.

The treason charge raises the stakes following an earlier ban on three TV channels tied to Medvedchuk. Forcing these TV channels off the air weakened Medvedchuk’s political party by denying it a major media platform, while also boosting President Zelenskyy’s credentials among the patriotic segment of the Ukrainian electorate.

On the international stage, the treason charge leveled against Medvedchuk sends a strong message to Putin that his man in Ukraine is being stifled. Kyiv may want to demonstrate that it has some cards of its own to play in the ongoing confrontation with the Kremlin. This is likely to anger Moscow and could easily fuel calls to teach “disobedient” Ukraine a lesson.

It is also entirely possible that Kyiv has been encouraged to do something about Medvedchuk by Washington. The US sanctioned Medvedchuk back in 2014 following the Russian seizure of Crimea, making his continued high-profile role in Ukrainian politics something of an eyesore.

Taras Kuzio, Professor, National University of Kyiv Mohyla Academy: Viktor Medvedchuk’s political force and his pro-Putin media outlets would never be allowed to operate in a democratic country at war. Both his party and his media empire promote Kremlin narratives, such as the need to accept Russian sovereignty over Crimea in return for “peace” and the characterization of the Russo-Ukrainian War as an “internal conflict.”

At the same time, I continue to doubt whether Medvedchuk or any of his colleagues will ever actually be convicted by a Ukrainian court. During the past thirty years of independence, members of the Ukrainian elite have only ever gone to jail in Germany and the US. The Ukrainian Prosecution Service should have been disbanded long ago based on its abysmal performance.

The treason charges against Medvedchuk also highlight the somewhat uncoordinated nature of President Zelenskyy’s national security policy. On one hand, Zelenskyy has recently been calling for a one-on-one meeting with Russian President Vladimir Putin, even though this sends a signal of weakness and will not solve anything. At the same time, he supports criminal charges against Medvedchuk, who is Putin’s personal agent in Ukraine. This prompted Holos MP Serhiy Rakhmanin to quip: “In 2019, Zelenskyy was a child in terms of his political understanding. After two years, he has now become a teenager. But he is not yet an adult.”

Volodymyr Yermolenko, Chief Editor, UkraineWorld.org: Medvedchuk is the leader of Ukraine’s pro-Kremlin forces whose close personal ties to Putin are well known. He has moved in Ukraine’s elite circles since the 1990s, and has consistently aligned himself with the most pro-Soviet, anti-European wing of Ukrainian politics.

During the early 2010s, Medvedchuk organized the “Ukrainian Choice” movement with the sole aim of discrediting Ukraine’s European integration. Critics said it would have been more honest to call his movement “Russian Choice.”

Following the Euromaidan Revolution and the outbreak of hostilities with Russia in 2014, Medvedchuk began work on creating a media empire and used it to attack Ukraine’s Euro-Atlantic trajectory. The current criminal charges he is facing indicate that the Kremlin has played a central role in enabling his activities in Ukraine.

Much will now depend on whether the charges of high treason lead to Medvedchuk’s conviction. If not, he will use his victim status to promote his political agenda. Even at this early stage in the case, Medvedchuk and his allies are portraying themselves as “dissidents” and victims of “fascism.” They are effectively presenting efforts to defend democracy as an attack on democracy. Similar tactics are also often employed by the Kremlin.

Brian Whitmore, Nonresident Senior Fellow, Atlantic Council: Ukraine’s decision to charge pro-Kremlin oligarch and politician Viktor Medvedchuk with high treason appears to be an attempt to neutralize what has long been one of Russia’s main vectors of malign influence in that country.

Since 2014, Russia has been waging a two-pronged war against Ukraine: the armed intervention in the Donbas and a stealthy non-kinetic campaign to destabilize the country through political proxies, disinformation, and oligarchic structures. Medvedchuk’s pro-Kremlin political party, the Opposition Platform-For Life, and the three television stations he is believed to control, have been key components of this effort.

Given that Medvedchuk is personally close to Vladimir Putin, this move by the Ukrainian authorities is not without risk. But allowing him and other pro-Kremlin proxies to continue operating unhindered in their efforts to destabilize Ukraine likely carries even greater risks.

The European Union has warned that Russia is seeking to “de facto integrate” the Kremlin-controlled separatist republics of east Ukraine. The EU raised the alarm in a note to member states, Bloomberg reported on May 12.