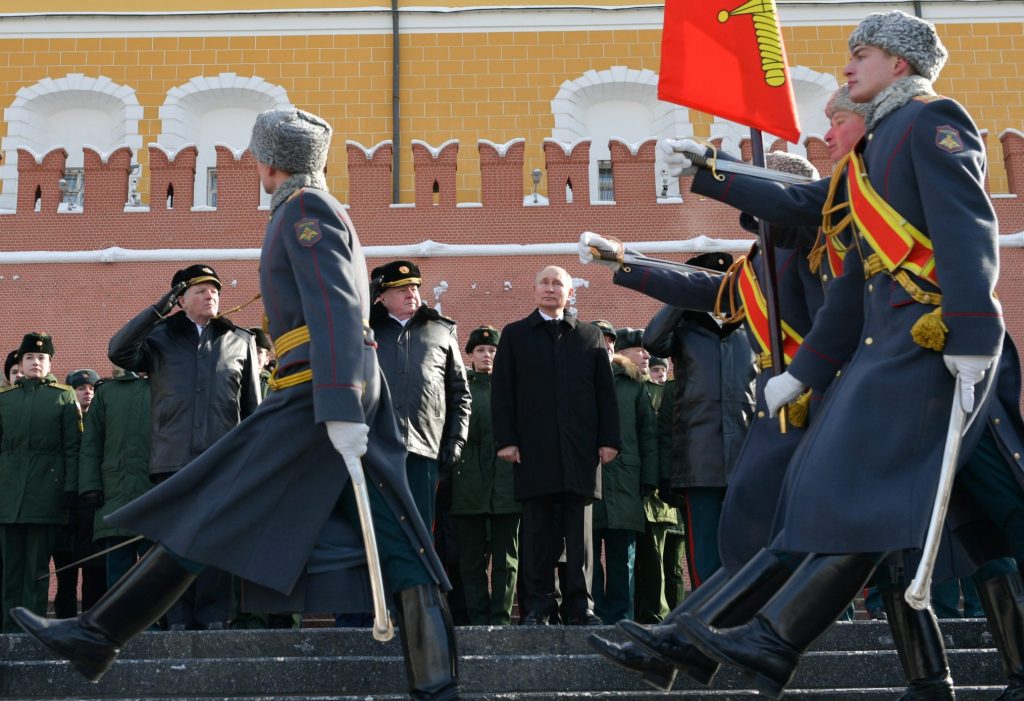 By moving entire Russian armies to the border with Ukraine, Vladimir Putin has succeeded in grabbing the world’s attention. But amid all the speculation over the Kremlin’s most likely next move, one key question remains tantalizingly unanswered: why now?

After all, the undeclared war between Russia and Ukraine is nothing new. Moscow’s offensive first began in February 2014 with the seizure of Crimea. This was soon followed by a Kremlin-led insurrection in eastern Ukraine. For the past six years, the front lines of the conflict have remained more or less static. What has persuaded Putin to suddenly threaten such a dramatic escalation?

As with any major geopolitical gambit, Russia’s current saber-rattling actions are likely driven by a number of converging factors.

On the domestic front, Putin faces parliamentary elections in September with the economy in a prolonged slump and growing signs of disquiet over the decision to extend his reign until 2036. A small, victorious war would certainly serve as a welcome distraction.

Internationally, now also appears a good time to test the resolve of the Western world. In the US, President Biden is still finding his feet and establishing his team. Closer to home, German Chancellor Angela Merkel is preparing to step down later this year, while the UK remains preoccupied with the aftershocks of Brexit.

These favorable circumstances have all played their part, no doubt. However, the most significant developments in recent months have taken place inside Ukraine itself.

Since the beginning of 2021, Ukrainian President Volodymyr Zelenskyy has taken a number of bold and unexpected steps to marginalize his country’s pro-Kremlin forces, while at the same time decisively aligning his administration with the geopolitical goal of Euro-Atlantic integration.

These policies have included the specific targeting of Putin’s personal friend and unofficial representative in Ukraine, Viktor Medvedchuk. For the previous seven years, the Ukrainian authorities had allowed Medvedchuk to conduct openly pro-Kremlin activities in the country, even granting him special privileges to fly to Moscow for private audiences with Putin. Most observers assumed this bizarre arrangement reflected unspoken agreements between Kyiv and the Kremlin regarding the indispensable role of Medvedchuk in delicate peace negotiations.

All that changed in February 2021, when Zelenskyy announced the closure of three pro-Kremlin Ukrainian TV channels linked to Medvedchuk, and imposed personal sanctions on the pro-Russian figure along with his wife. Given Medvedchuk’s close ties to the Kremlin and his apparent untouchable status, this was widely interpreted as an act of defiance directed at Putin himself.

The audacity of Zelenskyy’s move sparked fury in Moscow and provoked a response that is still unfolding. Days after the decision to shutter Medvedchuk’s TV channels, Kremlin forces in east Ukraine began to increase their attacks along the 400km front line of the conflict. By early April, the Ukrainian death toll for the year had risen to 27 soldiers, more than half the total number lost during 2020. While this localized escalation was taking place, the current build-up of conventional Russian forces began in occupied Crimea and in the vicinity of Russia’s almost 2000km land border with Ukraine.

Meanwhile, Kremlin leaders and regime proxies have been busy issuing a series of thinly-veiled threats and emotionally charged statements towards Ukraine. Putin’s deputy chief of staff, Dmitry Kozak, recently compared the Ukrainian government to “children playing with matches,” and warned that any military escalation would mean “the beginning of the end of Ukraine.” Amid a mounting chorus of anti-Ukrainian hysteria on Kremlin-controlled Russian TV, popular prime time host Dmitry Kiselyov used his flagship current affairs show on April 11 to brand Ukraine a “Nazi state,” claiming that Russia may be forced to intervene militarily in order to “De-Nazify” the country.

Russia’s attempts to justify its military deployments and recent surge in anti-Ukrainian rhetoric ring hollow. The Kremlin has argued that Kyiv is planning a military operation to retake occupied eastern Ukraine by force, and accused NATO of threatening Russia with heightened military activity in the region. Neither claim has been supported by convincing evidence, while few military observers regard suggestions of an imminent Ukrainian offensive as plausible.

Instead, Moscow’s actions appear to betray Russia’s barely concealed rage at the realization that Ukraine has been irrecoverably lost.

Although Russian influence in Ukraine has plunged to record lows since the onset of hostilities in 2014, Moscow had until recently remained firmly in denial over the catastrophic geopolitical cost of the attack on Ukraine. Putin himself had continued to profess his belief that Russians and Ukrainians are “one nation,” while the Russian establishment appears to have genuinely regarded the crisis in bilateral relations as temporary.

President Zelenskyy’s recent actions have done much to expose these delusions. When he first won election in April 2019, Zelenskyy looked to be the Kremlin’s ideal candidate. A Jewish Russian-speaker and a political novice, Zelenskyy shared none of the nationalist tendencies that made his predecessor, Petro Poroshenko, so unpalatable to Moscow. Even better, he had spent a sizable chunk of his showbiz career in Russia and was openly committed to ending the war between the two countries.

However, Zelenskyy soon found that his concessions to the Kremlin were a one-way street. The Ukrainian leader staffed his inner circle with Russia-friendly faces and replaced the wartime rhetoric of the previous administration with diplomatic euphemisms. On the front line of the conflict in eastern Ukraine, he agreed to withdraw Ukrainian forces from a number of strategic points and imposed tough new restrictions that limited the ability of his troops to engage the enemy.

None of this produced the desired response from the Kremlin. Instead, Moscow cemented its grip on eastern Ukraine by issuing Russian passports to hundreds of thousands of local residents. By late 2020, it was clear that the peace process had ground to a complete halt, leaving Zelenskyy with little option but to change course and embrace Ukraine’s Euro-Atlantic choice.

Russia’s refusal to meet Zelenskyy halfway appears to have been shaped by the mistaken belief that a revival in the fortunes of Ukraine’s openly pro-Russian political forces was still possible. In reality, support for pro-Kremlin parties and candidates has collapsed since the outbreak of hostilities. In four consecutive wartime elections over the past seven years, pro-Moscow forces have struggled to collectively pass the 20% barrier. This is a far cry from the parliamentary majorities and presidential victories they secured in the years immediately prior to 2014.

Nor is there any reason to believe things could conceivably improve. With a pro-Kremlin electorate heavily concentrated in the pensioner demographic and a new generation of Ukrainians emerging who favor Western integration and know Russia primarily as an aggressor nation, notions of a political comeback are now highly fanciful. Indeed, Zelenskyy’s remarkable transformation in the space of less than two years from Russia-friendly candidate to anti-Kremlin crusader has served to underline the absence of any common ground between an independent Ukraine and a resurgent Russia.

Russia’s deteriorating political predicament in Ukraine is mirrored in virtually every other sphere of daily life. Once by far Ukraine’s main economic partner, bilateral trade volumes have plummeted by around 75% since 2014 to leave Russia some distance behind the EU and China. The conflict has caused huge splits in the once virtually indivisible Russian and Ukrainian entertainment industries, with many Russian celebrities banned from Ukraine and Ukrainian TV channels no longer filling their schedules with Russian TV content. In the spiritual realm, the 2019 establishment of the Orthodox Church of Ukraine has drastically undermined the authority of the Russian Orthodox Church in Ukraine and led to the defection of hundreds of individual parishes.

These setbacks have robbed Russia of the soft power tools that until relatively recently had formed the basis of Moscow’s dominance over Ukraine. Instead, Putin now finds himself with almost no means of influencing events in Ukraine beyond the direct threat of overwhelming military force. This represents a foreign policy failure of catastrophic proportions.

When Putin took power at the turn of the millennium, relations between Russia and Ukraine were so close that the boundaries between the two post-Soviet countries were often blurred. Through a series of blunders, misconceptions, and wishful thinking, he has transformed this winning hand into one of the most consequential geopolitical defeats in Russian history. No wonder he is angry.

This makes the current period even more dangerous than might immediately be apparent. Putin cannot be understood in terms of the day-to-day rationality that informs the decision-making processes of most Western politicians. On the contrary, he is driven by a sense of his historic mission to revive Russia’s imperial greatness. First and foremost, this means control over Ukraine.

Putin is acutely aware that if he becomes known as the man who lost Ukraine, his entire historical legacy will lie in ruins. This is the fate he now finds himself confronted with, and this is exactly why the Western world must take his saber-rattling very seriously indeed.

There is no guarantee that Putin is already committed to a large-scale military offensive. Indeed, it is far more likely that the order to mass troops at the border owed much to sheer frustration over Zelenskyy’s effrontery and a desire to remind the young Ukrainian of some basic geopolitical realities. Nevertheless, a disastrous escalation cannot be ruled out.

In the days and weeks ahead, it is vital that the international community demonstrates its continued support for Ukraine and unwavering commitment to the country’s territorial integrity. As well as vocally backing Kyiv, this means sending a clear and unambiguous message to the Kremlin regarding the high price Russia will pay for any acts of aggression.

It is also important to look beyond the current crisis. The Russo-Ukrainian War is now in its eighth year and shows no signs of ending. This confrontation is rooted in Russia’s refusal to accept the reality of an independent Ukraine. Until the Western world forces Moscow to drop these imperial ambitions, the conflict in Ukraine will remain a destabilizing factor in international relations.