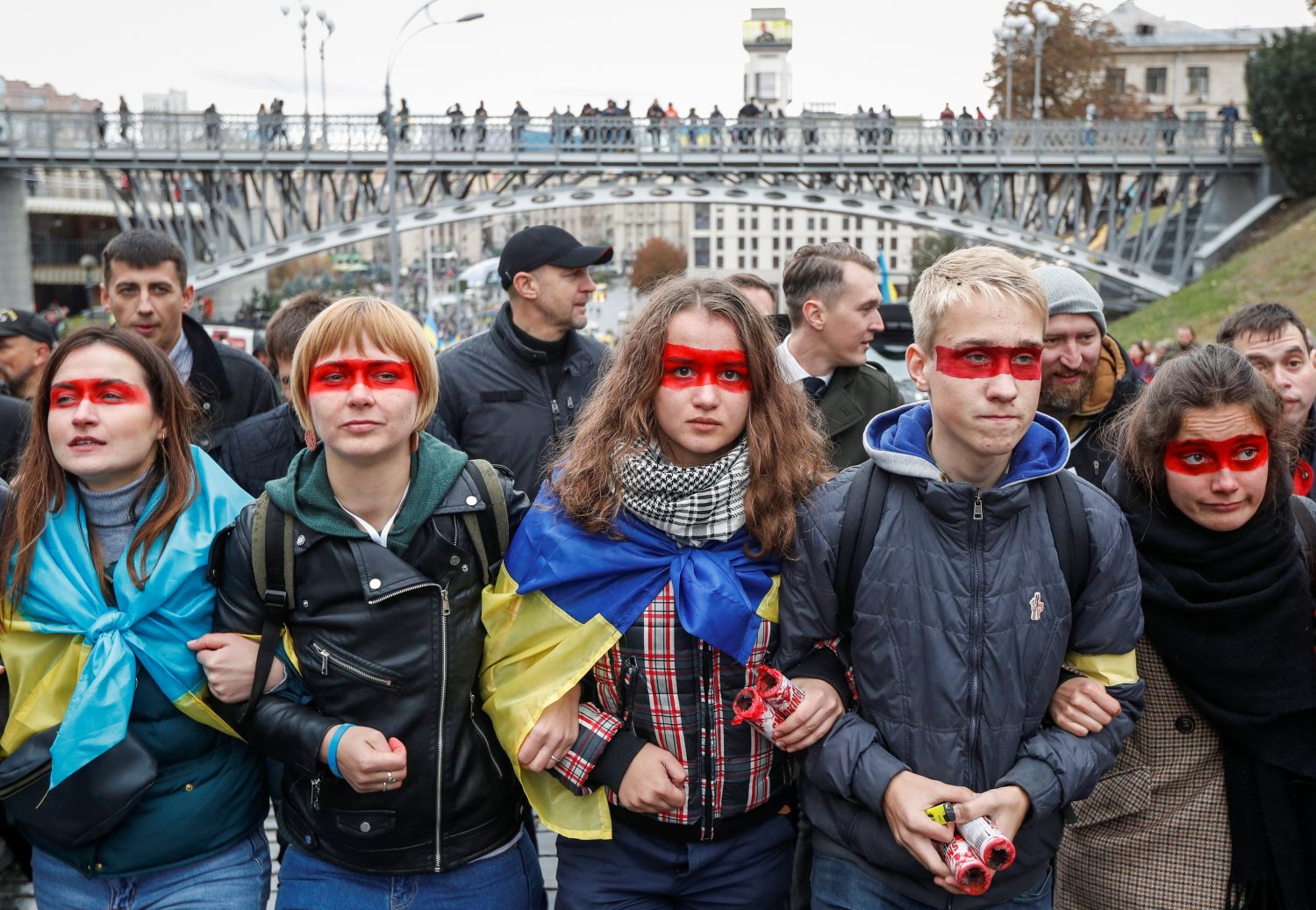 Vladimir Putin has beaten Ukraine. For five years, Russia has occupied seven percent of the country and extracted a staggering 5 to 7 percent from Ukraine’s economy in defense costs each year. To date, some 13,000 Ukrainians have died, tens of thousands have been wounded, and 1.6 million dispossessed.

But this is not an absolute victory. This is a stalemate, thanks to Ukraine’s valiant military. So, there is no reason to surrender, but neither is there reason to enter into hasty negotiations with the enemy.

I sympathize with Ukrainians protesting on the streets, but attitudes must change. They must disavow themselves of the delusion that anything other than a form of capitulation is possible or that France and Germany have the best interests of Ukraine at heart. Trade between Russia and France is booming and Russia and Germany will profit mightily once Nord Stream 2 is built.

And any search for face-saving is pointless. Ukrainian President Volodymyr Zelenskyy has signed on to the Steinmeier Formula which stipulates the withdrawal of forces, local elections, and autonomy for the occupied region within Ukraine. But details were scant. For instance, who will pay the more than 10 billion Euros needed to rebuild the region, and how can legitimate elections be staged in a region controlled by lawless Russian operatives and criminals.

This has brought the crowds back to the streets. The Donbas has also been destroyed. Its cities are unrecognizable and 1.6 million Ukrainians have already fled. More would leave if they could. Once the industrial heartland of the country, its infrastructure has been destroyed, its housing neglected and infested by undesirables with mafia in charge posing as a government.

Without containment, the Donbas will be a Trojan Horse or another “Trashcanistan” along 350 miles of Ukrainian border like Moldova’s Transnistria, a staging ground for crime.

Despite a sincere desire to stop the fighting, the Russians are mocking Zelenskyy and Ukrainians alike, according to reports.

“What Ukraine was so afraid of has happened… Zelenskyy doesn’t understand what he signed,” concluded Vladimir Soloviev, the host of the nightly The Evening With Vladimir Soloviev on Russian state television.

At the Russian Energy Week forum, Putin said that Zelenskyy “will have to decide how relations between Ukraine and the Donbas will develop,” referring to the Ukrainian region as though it was a sovereign nation. He opined that Ukraine “did much better when it was a part of the Soviet Union, along with Russia.”

Clearly, Ukraine must devise its bargaining position, and anticipate Russia’s, or it will be devoured in upcoming talks, left to the mercy of Putin as well as of France and Germany, both co-opted by Putin.

Before talks, Ukraine must demand that the Americans and British also be at the table. In 1994, both nuclear powers signed the Budapest Memorandum commitment to Ukraine’s sovereignty. But before ceasefire talks in 2015 Putin rejected their involvement, and suggested Germany and France. And then President Petro Poroshenko agreed which was an incalculable mistake. If Russia balks, then the United Nations should be the arbiter or at the table.

Next, Ukraine must determine its bottom line. This is essential because any successful negotiation is about finding a compromise between two clearly articulated positions. Putin’s offer is already known: Russia will withdraw its forces, allow local elections, then dump what’s left of the Donbas, leaving his proxies in power, and pay nothing toward the damages it caused. Oh, and besides, Crimea is off the table and sanctions must end.

Here is what Ukraine’s unvarnished position should be: Russia must withdraw all its military, proxies, and weaponry from the Donbas and compensate the 1.6 million refugees who fled and to rebuild the damage to infrastructure, industry, and housing caused by its five-year occupation and war. Then Russia must sign a 20-year contract to provide Ukraine’s pipeline with natural gas. Crimea can be set aside for a second set of negotiations once Russia pays compensation and guarantees energy security.

If Putin rebuffs such an offer, or any version, then he will be internationally reviled and Ukraine must immediately disengage from talks. From there, the only viable strategy would be to fortify the military, ask for United Nations’ peacekeepers to patrol the war front, and concentrate all efforts on gaining membership to the European Union by eliminating corruption and lifting living standards.

This is not surrender. The reality is that the war with Russia has already been lost. It’s recognition that Putin holds all the cards and that Ukraine’s best strategy is to stand up for justice in front of the world and, if denied, embark on a transition course immediately.

At the end of the day, Putin’s legacy will not be glory, but he will go down in history as a pariah who has brought about death and destruction. As for vindication—for those who lost their lives and made sacrifices—an end to future murder and mayhem may simply have to suffice.

A free, fair, and prosperous Ukraine may be the best, and only, revenge available and is Putin’s worst nightmare.

Image: People march at a rally against the approval of the so-called Steinmeier Formula, in Kyiv, Ukraine October 6, 2019. REUTERS/Valentyn Ogirenko