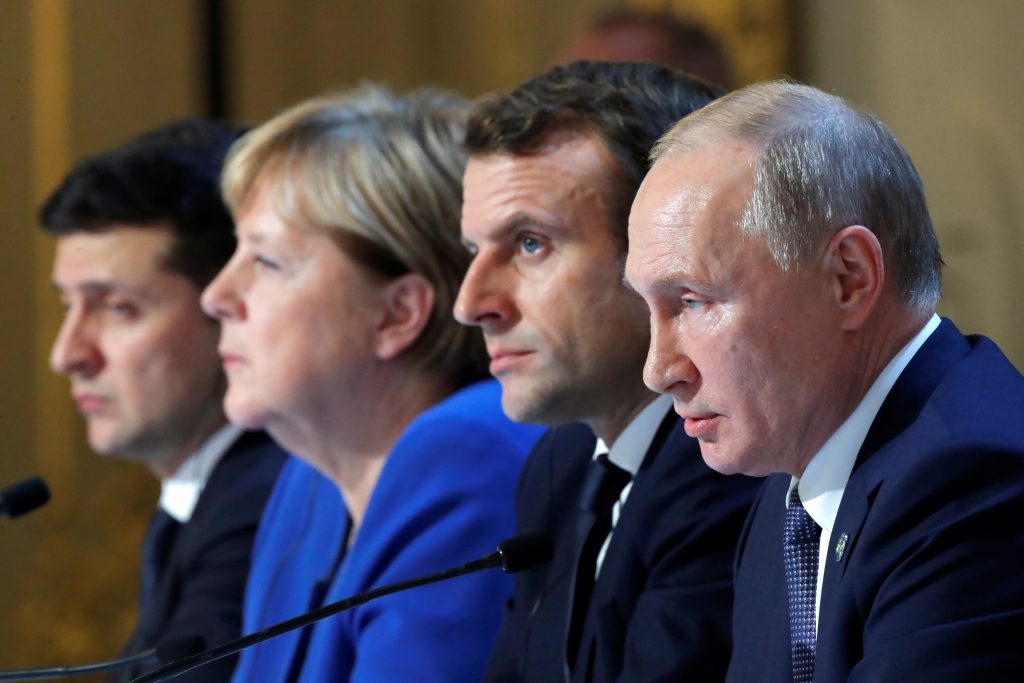 The promise of peace was key factor behind Ukrainian President Volodymyr Zelenskyy’s remarkable election success in 2019. To many voters, the former comedian represented the prospect of a fresh start for peace talks that had ground to a halt over the previous five years of bloody stalemate in eastern Ukraine. During the presidential election campaign itself, many of Zelenskyy’s supporters accused incumbent president Petro Poroshenko of artificially prolonging the war for reasons of political and personal gain. Zelenskyy himself positioned the quest for peace as his number one priority and spoke of the need to engage directly with the Kremlin in order to bring the conflict to an end.

Zelenskyy’s talk of a new approach to the peace process proved hugely attractive to the war-weary Ukrainian public and helped secure the comedian-turned-politician a landslide victory with a record 73% of the vote. However, one year on, there is very little to show for this initial optimism.

Since becoming president, Zelenskyy has followed through on his campaign promise to prioritize peace, making numerous concessions to the Kremlin in his eagerness for a breakthrough. He has pulled Ukrainian troops back from a number of strategic points along the front line, agreed to adopt the Kremlin-friendly Steinmeier Formula sequencing the implementation of Minsk-mandated steps towards peace, and even toyed with the idea of entering into direct dialogue with Putin’s proxies in eastern Ukraine.

None of this has led to reciprocal measures from Russia. On the contrary, Moscow responded to Zelenskyy’s election victory by immediately unveiling plans to accelerate the distribution of Russian passports to residents of Russian-occupied eastern Ukraine. This policy of establishing a passport protectorate has gathered momentum over the course of the past year, with hundreds of thousands of Ukrainians receiving Russian citizenship. It represents annexation in all but name and does not suggest the Kremlin is genuinely interested in deescalating.

Nor has Putin softened the tone of his long-running war of words against Ukrainian statehood. During his annual press marathon in December 2019, the Russian leader dismissively referred to southern and eastern Ukraine as “ancestral Russian lands” with no historic connection to Ukraine. Three months later, he spoke at length to Russian state news agency TASS about his belief that Russians and Ukrainians are “one people”, before going on to claim that unnamed third parties were working to artificially separate them. Meanwhile, sporadic fighting continues along the 400 kilometer front lines of Europe’s only war.

Despite these setbacks, Ukraine has little option but to continue pressing for peace. Speaking in Kyiv on May 20 at a press event to mark the first anniversary of his inauguration as president, Zelenskyy said he was ready for direct talks with Putin in parallel to the ongoing Minsk dialogue and further Normandy Format summits. He also claimed to have a number of alternative plans in place, but refused to elaborate. During the coming year, the need for alternative approaches is expected to grow. With the Kremlin showing little appetite for compromise and Ukraine unwilling to capitulate, it remains difficult to imagine a settlement that would satisfy both Kyiv and Moscow.

To mark the one-year anniversary of the Zelenskyy presidency, the Atlantic Council invited a number of experts to share their views on the Ukrainian leader’s pursuit of peace during his first twelve months in office and the prospects for progress in the year ahead:

Adrian Karatnycky, Senior Fellow, Eurasia Center, Atlantic Council: President Zelenskyy’s initial hope that his election would reopen the prospect of peace with Putin’s Russia can be written off as a product of his foreign policy inexperience. A year later, it is an indicator of deep self-delusion. Ukraine’s president pulls his punches and often remains silent in the face of daily Russian attacks. By doing so, Zelenskyy plays into the Kremlin narrative that Russia is not the aggressor and occupier but rather a neutral third party in an internal civil war. Equally troubling are the elementary tactical mistakes that have been made by a diplomatically inexperienced presidential team in the Minsk negotiations. The most glaring example of this trend was the decision to allow the signing of a background document by two members of the Russian-controlled LNR and DNR governments, who for the first time were recognized as representing these so-called separatist republics. Most worrying, however, is that the president himself has not matured on the job. This is in large part because his trusted inner circle consists exclusively of longtime associates from his former comedy team and entertainment industry lawyers. This is not an environment that facilitates the Ukrainian president’s intellectual growth.

Michael Carpenter, Managing Director, Penn Biden Center: The negotiations are static, in spite of occasional prisoner swaps and minor agreements, because Russia has not given up on its strategic goal of controlling Ukraine. This is a cold, hard geopolitical reality. Unless Russia experiences unacceptably high costs resulting from its ongoing occupation of eastern Ukraine, the Kremlin will continue a war of attrition in which it uses dark money and oligarchic influence to achieve through politics what it cannot (for the time being) achieve through war in Ukraine.

Alyona Getmanchuk, Director, New Europe Center: While former Ukrainian president Petro Poroshenko pursued a “security first” strategy in eastern Ukraine, his successor Volodymyr Zelenskyy has adopted an alternative approach that could be characterized as “people first”. This policy has led to some limited successes, including three rounds of prisoner exchanges and the reconstruction of a bridge at Stanytsya Luhanska that has made life significantly easier for the local population. Zelenskyy has also demonstrated clear political will to end the war. He did not wait for any indications of goodwill from Putin’s side. Instead, he made a number of unpopular unilateral concessions that sparked protests and widespread criticism within Ukraine. These concessions included accepting the Steinmeier Formula of peace process sequencing, and agreeing to the disengagement of troops from numerous points along the front line. Meanwhile, Russia made no substantial steps of its own in response. As a result, it has become obvious that having the requisite political will in Kyiv is not enough to end the war. Instead, Moscow holds the key to peace. This is the most important conclusion to be drawn from the first year of the Zelenskyy presidency. Much will now depend on Putin’s ability to understand that Ukrainian society will not allow any Ukrainian president to accept peace on Russia’s terms. He also needs to recognize that the Zelenskyy presidency remains a unique opportunity to end the only ongoing war in Europe. If Putin refuses to acknowledge this, then it is up to the international community, including the United States, to underline this point for him.

Brian Bonner, Chief Editor, Kyiv Post: Besides the welcome prisoner exchanges, it’s hard to see discernible progress towards peace. It seems to me that President Zelenskyy is not focused enough on rallying Western support for tougher sanctions against Russia. That support is more likely to come if Ukraine shows better progress in its internal battle against corruption. The lack of progress on the anti-corruption front, including the retention of people like Interior Minister Arsen Avakov, signals to the West that maybe Zelenskyy will not live up to his election promises. Inexplicably, as former Ukrainian Prime Minister Arseniy Yatsenyuk has recently pointed out, half of the TV news stations in Ukraine are still spouting Kremlin propaganda.

Solomiia Bobrovska, Ukrainian MP, Holos party: Whether due to inexperience or a lack of knowledge, President Zelenskyy seems to make one mistake after another. I regard his idea of creating an Advisory Council featuring representatives from Russian-occupied eastern Ukraine as a particularly grave mistake. This risked recognizing Putin’s proxies as legitimate and placing them on an equal footing with Ukrainian government officials, which is unacceptable. Beyond such errors, there has been no significant progress. Prisoner exchanges were common occurrences from 2014 until 2017, so the three exchanges during the first year of Zelenskyy’s presidency cannot be regarded as exceptional. Zelenskyy’s troop withdrawals along the front lines have failed miserably, with Ukrainian soldiers pulling back from positions that are then occupied by Russian hybrid forces who continue to violate the ceasefire. I call upon President Zelenskyy to stop gambling with Russia and seriously reconsider his approach to the peace process if he wishes to avoid future failure, both for himself and for Ukraine.

Michael Bociurkiw, Global Affairs Analyst: Shortly after Volodymyr Zelenskyy became president, hopes were understandably high that he would show Russian President Vladimir Putin there was a new sheriff in town. In the first few days of his presidency, Zelenskyy was able to throw Putin off guard by skillfully countering a Kremlin offer to fast-track Russian passports for Ukrainians living in Kremlin-controlled parts of Donetsk and Luhansk. Zelenskyy responded by offering Ukrainian passports “to all people who suffer from authoritarian and corrupt regimes,” but firstly “to the Russian people, who suffer most of all.” This was an exceptional gesture unlike anything seen from previous Ukrainian leaders. It helped create expectations that the inexperienced but bold Zelenskyy would be able to deliver on a key campaign plank and end the bloody conflict in eastern Ukraine. Unfortunately, this early flourish was to prove the exception rather than the rule. Probably due to bad advice from his inner circle, Zelenskyy showed diminished chutzpah when it came to dealing with the Kremlin in the lopsided September 2019 exchange of prisoners, bending to a last-minute Kremlin demand to include a man suspected in the downing of flight MH17 over eastern Ukraine in 2014. One year on, the death toll in eastern Ukraine continues to rise. Meanwhile, Russian-backed fighters have adopted bold new tactics and are now blocking international monitors from the OSCE on a daily basis. This is not the outcome we expected in the heady days of Zelenskyy’s 2019 electoral sweeps. But as I have often said, the former TV comedian may be smarter than we think. With Moscow confronted by plummeting oil prices and a mounting coronavirus crisis, Zelenskyy could yet manipulate Russia’s vulnerabilities in order to end what is now one of the world’s longest-running conflicts.

Peter Dickinson is the editor of the Atlantic Council’s UkraineAlert blog.