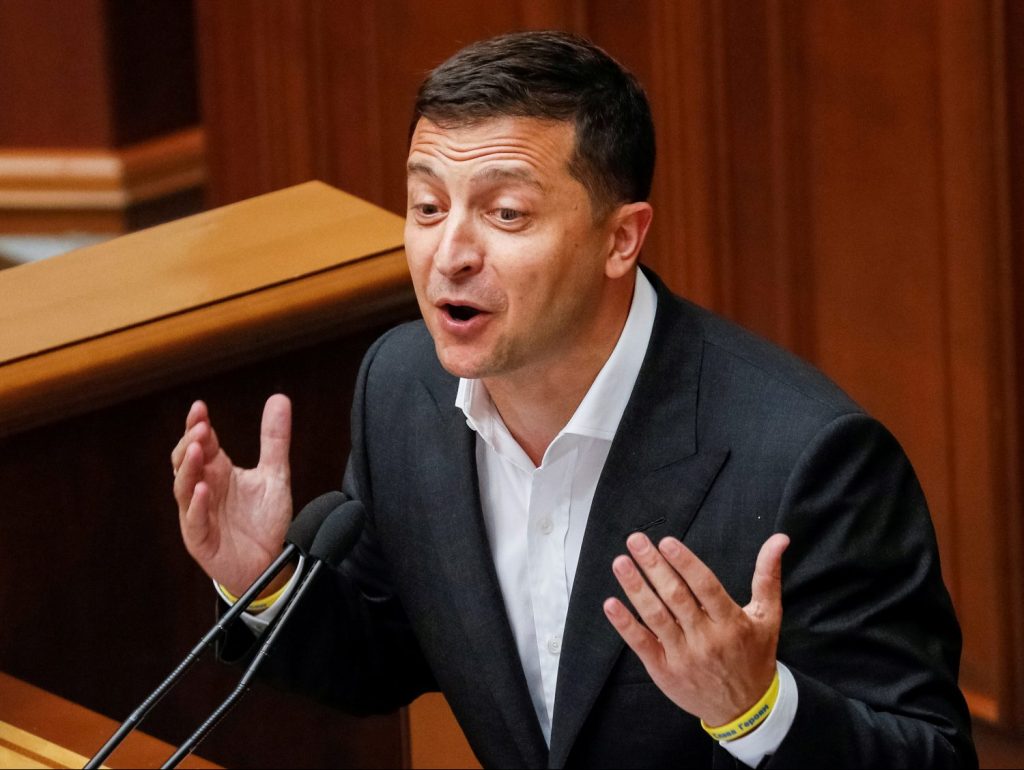 Two weeks ago, everything looked grand in Ukraine. Two historic elections brought an inexperienced president and his brand-new party to power on the promise of peace and massive economic growth.

At first, it was hard to know what to make of Volodymyr Zelenskyy, the forty-one-year-old comic turned president. He berated and fired corrupt officials, and posted two prominent reformers with impeccable credentials to national security and defense positions. Simultaneously, however, he appointed the former attorney of the country’s most notorious oligarch as the head of his administration.

Zelenskyy got more good marks after selecting Oleksiy Honcharuk, a thirty-five-year-old who spent the last four years pressing the government to improve Ukraine’s business climate, as prime minister. Honcharuk selected a promising cabinet, and Zelenskyy and Honcharuk made a series of concrete vows. They pledged that by unleashing a series of liberal market reforms, the economy would grow 40 percent and one million new jobs would be created over the next five years.

“Ukraine’s libertarian revolution,” as journalist James Brooke put it, appeared underway. The big reform that the West has been beseeching Ukraine to undertake for years—legalizing the sale of farmland—would finally happen by December. The government also promised to clean up customs, privatize state-owned companies, fix the tax code, rewrite its labor code, and many other sensible reforms.

The West breathed a sigh of relief. Maybe Ukraine would finally get things right.

Much changed last week. First, oligarch Ihor Kolomoisky reappeared publicly. Second, the presidential administration began pressing flawed bills through the parliament it controls and made a series of decisions that can only mean one thing: Zelenskyy is consolidating power. Ukraine is rapidly switching to a presidential republic from the parliamentary-presidential system its constitution prescribes. And the worst part is that there’s little to stop him.

On September 10, the country’s most notorious oligarch Ihor Kolomoisky met with Zelenskyy. The caption on the presidential Facebook page reads that the two spoke about business and energy. The meeting took place one day before the International Monetary Fund returned to Kyiv for meetings. The timing was odd: Zelenskyy spent much of the presidential campaign distancing himself from Kolomoisky, who had been his business partner. Zelenskyy swore many times that he wasn’t under the influence of Kolomoisky and that he’s his own man.

Ukraine needs another IMF program, and one of the red lines for a new program is that PrivatBank, the bank that Ukraine nationalized in late 2016 that Kolomoisky had co-owned, stays nationalized. Kolomoisky is fighting mightily to get it back.

Kolomoisky’s presidential photo-op coincides with a number of other worrying signals. The day after the photo, police raided the headquarters of PrivatBank. The former head of the National Bank who had the gumption to take Kolomoisky’s bank away, Valeria Gontareva, was struck in a hit-and-run accident on August 26; additionally, her son’s car was lit on fire in Kyiv on September 5, and on September 12 the police appeared at Gontareva’s Kyiv apartment with crowbars. On September 17, her home in Kyiv was burned to the ground. Gontareva has warned that she may seek asylum and that if anything happens to her, Kolomoisky is to blame.

Last week, Kolomoisky appeared at the Yalta European Strategy summit for the first time that anyone can remember. He attended lunch, smiled for hundreds of selfies, and took questions from journalists for more than three hours.

Then the new prime minister told the Financial Times that the government is willing to compromise on PrivatBank, but later denied the report.

What does all of this mean? Some analysts see the worst: the elections are behind us, the West is convinced that Ukraine is on the right path and won’t say a darn thing so long as the economy grows, and Kolomoisky can do what he wants. Others note that Kolomoisky is a wily, unpredictable operator and may not be as strong as he appears. He may be trolling all of us, trying to signal that he has undue influence when he has little.

What’s clear is that the optics are terrible. Zelenskyy needs to maintain the appearance of fighting the oligarchs; last week’s Kolomoisky sightings do not further the image of a president who claims that everyone will get a fair shake. If the new administration wanted to reassure the IMF and the West, this was exactly the wrong way to do it.

Ukraine also had a bad week domestically. The new president and parliament are quickly consolidating power, from dismissing the Central Election Commission to introducing flawed judicial reform bills that would give the new general prosecutor unlimited power to reform its office, ignore the problematic High Council of Justice, a body with the power to hire, fire, and discipline bad judges, and reduce the number of Supreme Court justices.

Critics in and outside of government charge that these steps are meant to ensure that the new parliament and existing judges remain loyal. Parliament also plans to introduce new rules that would enable political parties to remove MPs if they don’t vote or behave the right way. Once these changes are consolidated, some of the most important institutions will be easy to control.

Without a doubt, the new parliament has done some good things. Among other things, observers are quick to point out that it finally eliminated parliamentary immunity; starting on January 1, MPs can be prosecuted for illegal actions.

But the central organizing principle is speed. Zelenskyy’s Servant of the People party thinks it has six months to press through its agenda before its support dries up, and its attitude is pass now, fix later. However, that means there’s no time for MPs to read or debate the draft bills. One can criticize the Poroshenko administration for many things (I certainly did), but its officials took at least a year to figure out how to reform and pass new legislation on the Supreme Court, for example, and even then they got it wrong. (Most experts point out that twenty-five percent of Poroshenko’s “reformed” Supreme Court is tainted.) Servant of the People wants to “fix” the court in weeks. And because Zelenskyy and his office control the parliament, they can shove through just about any bill they like.

Take one bill under consideration. The IMF wants parliament to reinstate a law on illicit enrichment, which means that people who have more wealth than they’ve legitimately earned will be punished. On paper, it sounds great. However, Servant of the People raised the limit to about $600,000. This means that those who stole below $600,000—over 75 percent of the officials whom the National Anti-Corruption Bureau wanted to prosecute in the past five years—wouldn’t be sent to jail if they had been convicted. The new bill would confiscate assets below $600,000 but it wouldn’t send these crooks to jail.

Pushing through a bill like this is the wrong approach, especially since the new government has no feedback loop. While Zelenskyy can legitimately claim to have an overwhelming mandate, social media does not count as two-way communication. He hasn’t taken any interviews since he became president, and civil society already feels alienated and ignored.

Ukraine has a great chance to turn things around: to become a real Western country with a rules-based system where investors want to go, and to stem its massive brain drain problem. But passing complex legislation in eighteen minutes and insisting on speed over substance is exactly the wrong way to do it. And so is giving Kolomoisky the time of day.