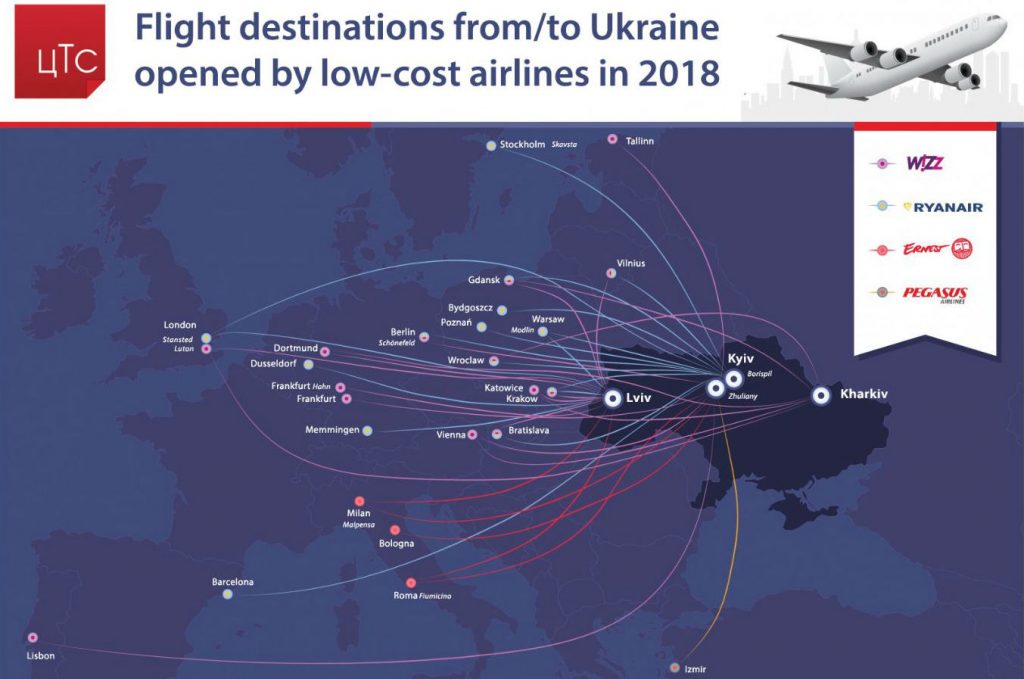 Transportation links provide advance warnings as to where a society is going physically and mentally.

Until five years ago, all of Ukraine’s roads led to Moscow. Now they go west.

For cars, Poland and Slovakia are building four lane divided highways that will reach Ukraine’s western borders in the early 2020s. Even without these highways, ads in the Kyiv metro advertise one way bus tickets from Kyiv to Warsaw for the equivalent of $8.

Three years ago, Moscow pundits smirked that Ukraine was shooting itself in the foot when Kyiv banned flights between Ukraine and Russia.

Take Kharkiv airport. In the Soviet era, it was built to fly Ukrainians to Moscow and Leningrad. Three years after losing all Russia routes, Kharkiv air traffic nearly hit a record 1 million passengers last year–20 times the 2002 level. Instead of flying workers to jobs in Russia, a whole generation of Russian-speaking Kharkivites are flying on LOT Polish Airlines to Warsaw, on Wizz Air to Gdansk, Katowice, and Wroclaw, or on Ernest Airlines to Milan and Rome.

From east to west, Ukraine’s airports are adding new direct flights to Europe, pulling the nation out of its historical isolation. Last year, passenger traffic at Kherson jumped by 42 percent, at Lviv by 48 percent, and at Kyiv Sikorsky (Zhuliany) by 52 percent. In 2018, Kyiv Sikorsky handled 2.8 million passengers, 100 times more than in 2010. As a growing Wizz Air hub, Kyiv Sikorsky now offers Kyiv residents direct flights to 51 cities. Of these, 41 are in the EU.

In the west, Lviv has direct flights to 30 cities, all but two in the EU. At Lviv and Kyiv Sikorsky, about 90 percent of passengers fly internationally. Spreading cheap EU flights across the country, Ryanair and Wizz Air are expected to expand this summer, starting with Odesa and Kharkiv.

Last March, when President Petro Poroshenko attended the signing agreement with Ryanair at Boryspil, he enthused that Europe’s largest airline would help millions of Ukrainians discover the EU.

Indeed, in a societal shift unprecedented in Ukrainian history, millions of Ukrainians are experiencing Europe first hand–for work, tourism, and study. In 2017, at the start of the 90-day visa-free regime, Ukrainians accounted for the top nationality winning foreign temporary residency permits in the EU. In another case of trading places, Poland after 2014 has topped Russia as the top source of wage remittances from Ukrainians working abroad.

For outbound tourism, the impact of the open borders regime with the EU is so strong that one Odesa hotelier told me in September that he lost many of his upper-end visitors last summer. Why vacation in Odesa when you can go to Rimini?

Last year, at the Ryanair signing ceremony at Boryspil, Ryanair Chief Executive Michael O’Leary corrected Ukraine’s president. The Irishman said, in effect, that his airline does not want to become a flying bus for Ukrainian gastarbeiters. Ryanair’s business model–and its powerful marketing machine–calls for bringing millions of Europeans to Ukraine.

The next day, on November 21, Wizz Air CEO József Váradi met with Poroshenko and promised to invest $2.5 billion on Ukraine routes, to base up to 20 Airbus here, and to carry 6 million passengers by 2025.

A generation of Ukrainians is growing up without ever visiting Moscow or St. Petersburg. Their points of reference are cafés in Krakow, a beach on the Adriatic, a museum in southern France.

This spring, when Ukraine turns green again, the second shoe will drop.

While Ukrainians–and Ukraine watchers–obsess about politics, Europeans will be studying their email alerts for deals on weekend city breaks. They will discover a new destination, soaked in history, with no visas, minimal street crime, and very low prices–all within a 2-3 hour flight of most EU cities.

In the dead of winter, few in Kyiv today realize the implications of the economic models of the discount airlines. One British friend groaned to me recently that Kyiv will become a destination for stag parties.

Maybe. But what I see from where I live, one block from Kyiv’s Golden Gate, are groups of foreigners listening to tour guides, who talk in different languages about Yaroslav the Wise.

Last October, my son William and I flew to Sofia, Bulgaria, for a weekend. We checked into an Airbnb apartment one block off Sofia’s equivalent of Kreschatyk. Walking the city center in the balmy weather, we kept encountering groups of foreign tourists—largely couples of all ages—following guides holding wooden paddles marked: “Free City Tour.”

What’s up? I asked one volunteer guide, a university student. He replied: “Ryanair started flying here in 2016.” Today, Ryanair flies from 23 EU cities to Sofia. What do they find? A history-soaked walkable city, with low crime, no visas, and cheap prices.

The stage is set for 2019 to shape up as the year when Europeans discover Ukraine.

The saga of David and Goliath on the outskirts of Kyiv

As a newly elected president and parliament have been sworn in, and a new government formed, the new political class must be ready to radically transform the values of Ukraine’s business culture.