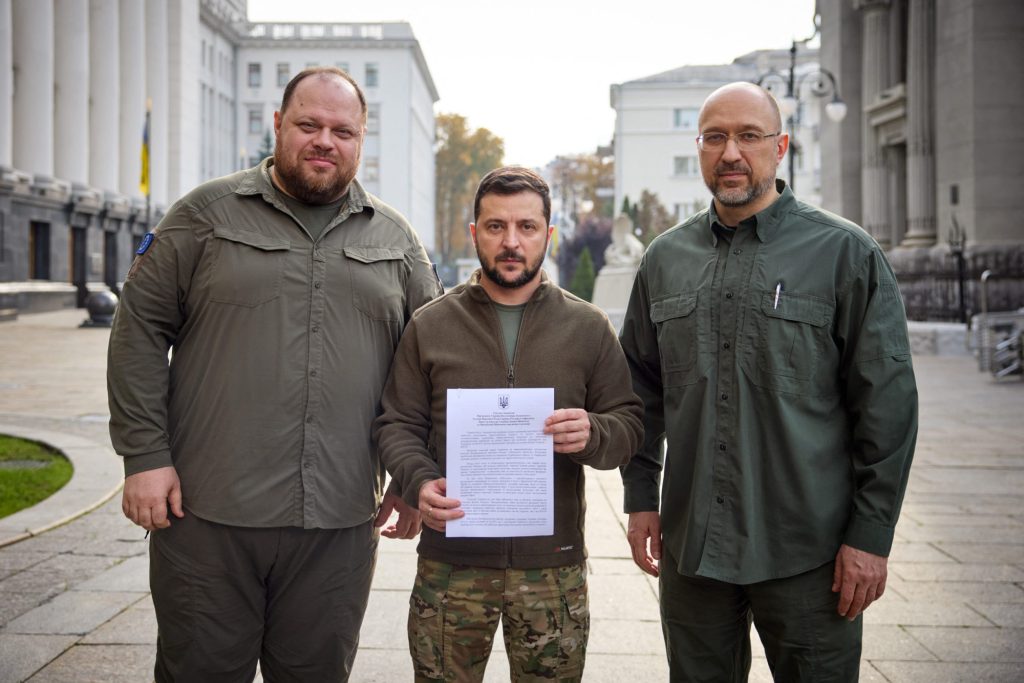 On September 23-27, Russia conducted sham referendums on joining Russia in the Luhansk, Donetsk, Zaporizhzhia and Kherson oblasts of Ukraine. These fake votes were illegal according to international law. No credible observers viewed the voting or counting process, while anecdotal reports indicated numerous instances of people forced to vote at gunpoint.

At a September 30 Kremlin ceremony, Putin signed agreements incorporating the four regions into Russia. He asserted that Russia would “defend our land with all the forces and resources we have.” However, Russia does not even control all of the territory it claims to be annexing. Meanwhile, the Russian leader’s declaration has not stopped the Ukrainian military from pressing forward with counteroffensives in the Kherson, Donetsk and Luhansk regions.

Immediately following Putin’s signature of the incorporation agreements, Zelenskyy responded by stating that his country was seeking “accelerated accession” into NATO. This riposte again made clear that an earlier Ukrainian offer to accept neutrality was no longer on the table.

Zelenskyy’s rare misstep in appealing for fast-track NATO membership is understandable. His country has doggedly fought the Russians for nearly eight months. While Ukrainian forces have surprised the world, and especially the Russian General Staff, with their capabilities and tenacity, Ukraine has paid a heavy price in terms of military and civilian losses.

Ukrainians believe their fight has earned them the right to membership in the alliance. They see their forces defending not just Ukraine but also NATO members from a revanchist Kremlin that aims to overturn the post-Cold War order in Europe and whose ambitions extend beyond Ukraine.

However, it is often prudent in diplomacy to know the answer before asking the question, particularly before making a public ask. Kyiv cannot be happy with the responses to Zelenskyy’s September 30 appeal, but these responses should not have come as a surprise.

To be sure, on October 2, the leaders of nine Central and East European NATO members (the Czech Republic, Estonia, Latvia, Lithuania, North Macedonia, Montenegro, Poland, Romania, and Slovakia) issued a joint statement endorsing a membership path for Ukraine. Canada separately expressed support for Ukraine’s membership in the alliance.

That makes for only ten of NATO’s 30 members. The Bulgarian president declined to join the statement of his nine fellow regional leaders because he disagreed with the language on Ukraine’s membership in NATO. Others took a cautious approach. NATO Secretary General Jens Stoltenberg side-stepped the membership question, while US National Security Advisor Jake Sullivan said the membership process “should be taken up at a different time.” Many other NATO allies responded with silence.

Under NATO rules, approval for Ukrainian membership would require a consensus of all 30 members (32 once all current allies ratify the accessions of Finland and Sweden). The reality is that Ukraine does not currently have the votes it needs to get on a membership track.

The reason is clear. Article 5 of the NATO Treaty commits allies to treat an attack against one as an attack against all. If Ukraine, now under attack by Russia, became a member, other allies would be obligated to come to its defense, the assumption being with their own armed forces.

Many NATO countries are providing arms and other military assistance to help Ukraine defend itself against Russia. But they have drawn a red line against offering their forces for Ukraine’s defense and have made clear that they wish to avoid a direct NATO-Russia clash.

There is a logic to that. A Russian defeat against Ukraine would not be existential for Russia, although it certainly might not benefit Putin’s longevity in the Kremlin. However, were US and NATO military forces to enter the war on Ukraine’s behalf, that could well change how the conflict is viewed in Moscow, where many would regard US and NATO entry as aimed not just at defending Ukraine but at destroying Russia. They could then see the war as existential. Things could soon become unpredictable and very dicey.

Rather than seeking a NATO membership track that Kyiv cannot currently get, Zelenskyy should continue to focus on securing immediate help in the form of more arms and military assistance. This will be far easier for NATO allies to agree to provide. It took just a few months for military assistance for Ukraine to move from Javelin man-portable anti-armor weapons and Stinger shoulder-fired anti-aircraft missiles to Guided Multiple Launch Rocket Systems with a range of 50 miles and NASAMS short- and medium-range air defense systems.

NATO allies can and should provide more arms. ATACMS missiles with a range of some 200 miles come to mind. This should currently be Ukraine’s top priority. Moreover, this war will end at some point. Kyiv should consider what it will need to build a military capable of deterring a future Russian attack. Indeed, a modernized Ukrainian military would provide the country’s best security guarantee.

The Ukrainian shopping list could include weapons such as US M-1 and German Leopard main battle tanks, Western air defense missiles and aircraft, and perhaps US A-10 ground attack planes. While NATO membership for Ukraine would require a consensus decision by all alliance members, countries make decisions on providing arms and other military assistance to Ukraine on an individual basis. Many allies likely would prefer to commit to arming Ukraine than to taking on a commitment to defend the country.

After the war, Kyiv could still pursue the question of ultimate membership. NATO leaders at their July 2022 summit reiterated that the alliance’s open door policy remains in effect, including for Ukraine. In a post-war world, Kyiv might find that circumstances change sufficiently to make possible what is now not doable. For the present, however, Ukraine should concentrate on what it can get.

Steven Pifer is an affiliate of Stanford’s Center for International Security and Cooperation and a nonresident senior fellow with the Brookings Institution. He previously served as US Ambassador to Ukraine (1998-2000).