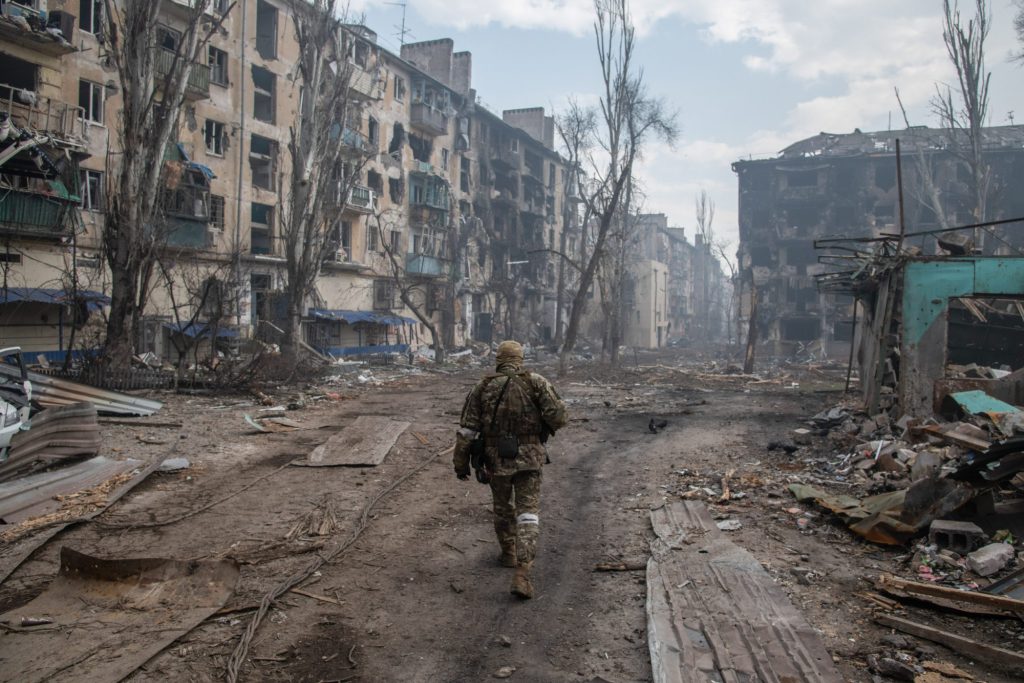 By the beginning of March, the Russian army had encircled Ukrainian port city Mariupol and wouldn’t allow civilians out. Russian planes began to wantonly destroy civilian targets, killing thousands of men, women, and children. The bustling and predominantly Russian-speaking port city of 460,000 had firmly rejected Vladimir Putin’s advances in 2014. Mariupol boasted all the modern amenities, from European tulips to a popular skating rink, and had begun to make a name for itself as an IT hub. It was now under siege.

The manner in which an estimated 107,000 people got out of Mariupol still remains little understood. Russian roadblocks surrounded the city and citizens were not allowed out. US Secretary of State Antony Blinken presented an evacuation plan on March 3 which Russia quickly rejected. The international community demanded safe passage for civilians, but the Russians stalled.

The first convoy of vehicles left Russian-held Mariupol on March 5-6, and it did so without Russia’s permission. Father Pavel Kostel, a priest with the Ukrainian Orthodox Church who was in Mariupol at the time, was part of the first convoy that got out. In this September 24 interview, he explains how people cunningly circumvented the Russian checkpoints and made their way to freedom. The interview has been edited for clarity.

Did you lead a convoy of cars out of Mariupol on March 5?

We did not lead a convoy of cars ourselves; we joined the main convoy of about 100 cars. We couldn’t take the initiative because we had a problem leaving Mariupol. As turned out, everyone was a leader. Everyone tried to help everyone in the convoy. A large group of people left, and I was one of those people.

How did you get out?

I’ll start with how the convoy actually formed. We found out by chance that there was an opportunity for many cars to pass. We heard a radio report. There were no normal communications. I could hardly get a cell phone signal. The priest who was with me heard the report, and we just started driving because we had no contact with other people. We passed three military checkpoints, but they stopped us at the fourth. That checkpoint was blocking men of conscription age, from 18 to 60 years old, from leaving Mariupol. Cars began to accumulate at the checkpoint, and a convoy formed of around 100 cars between the third and fourth roadblocks. That’s why so many cars and buses gathered. Someone tried to count the people, but everything was very chaotic, and we do not know the final number.

Where did the convoy stay overnight? Did you sleep in your cars?

We were stuck between roadblocks at a kind of fork in the road when the head of the neighboring village council saw all the people, women, and families with children, and told us about a remote village, some 30 kilometers from the Mariupol-Zaporizhzhia highway, where we could sleep. He said to go to the village of Temryuk. We drove from 11:30 a.m. to 5 p.m., and it was almost curfew when we got there. People were worried. We didn’t know how the Russians would react. The people in the convoy refused to go to the village at first. The head of the village talked them into it because it was really cold, so we went there to spend the night.

Mariupol Mayor Vadym Boychenko facilitated talks to get buses out of the city. We were supposed to join these buses the next day, March 6.

How did you get out of the village?

We gathered near the village school at 8 a.m. for a meeting. Everyone who was in cars agreed to go together. It happened spontaneously because no one knew each other. Everyone wanted to get out of that hell. No one appointed me leader. Who am I, after all. I’m just a priest. I told them that I knew the mayor, and that there was an opportunity to join the convoy of buses. But then we got news that the buses had not been allowed to leave.

Someone from the village told me that we could bypass the fourth checkpoint by taking a road through the fields. Some people went to the fields to check and confirmed that there was a road. A group of cars went ahead as scouts because they knew the road. A large column of cars followed after them. We hoped that our sheer numbers would keep the Russians from shooting us. One car is easy to shoot up, but a convoy has too many witnesses. I think that this is what prevented us from being robbed.

When we were driving along the road on Sunday, we saw dead Russians at a checkpoint. Russian soldiers left their own dead comrades behind. They didn’t even want to pick them up. It was terrible. We were zigzagging around them. That’s when you understand that this is war. You understand that you can also die. You don’t know what lies in store for you. We drove around them. Ahead of us, there were three more Ukrainian checkpoints. They checked us to make sure we weren’t saboteurs.

What was the experience like as you crossed the first three Russian checkpoints out of Mariupol?

They didn’t see us as a group at all. They examined each car and the people in it separately. They didn’t pay that much attention to the fact that it was a column of cars. If they had wanted, they could have taken anyone from the convoy and that would have been it. But then they weren’t as aggressive toward people as they are now. They didn’t rob anyone or take money, as happened later. My assistant and I introduced ourselves as priests. We told them that they we were leaving just like everyone else. Of course, the Russian soldiers introduced themselves as being from the Donetsk People’s Republic. “Where are you going?” We had a residence permit in western Ukraine, in Kamianets-Podilskyi, so we were a little worried about that. But they let us pass without any problems. They said, “We’ve got priests, too.”

Some of them asked strange questions, some were more aggressive, but there was no super-aggressive interrogation. That started later. They didn’t force any of the men to get undressed.

Where are you a priest now?

I am a priest in the Pauline Order, the monastic Order of St. Paul the Hermit. We have five monasteries in western Ukraine. My brothers, priests, live in a church with a monastery in Kamianets-Podilskyi. The order sent me there, and now I help them; we work together. We eagerly await the liberation of Mariupol, of course! I have contacts there who stayed, but I can’t just go back. Priests are in danger there now.

Is there anything else we should know about the evacuation?

You have to understand that when you leave Mariupol and see Russians in front of you, there are no rules. People always hope that somehow the Russians will be reasonable, that they won’t kill you, but they have no conscience. This is the lottery that our life has become. You shouldn’t trust them because they don’t keep any promises.

It’s a miracle that we got through at all. Everything could have turned out differently. You just go into the unknown full of adrenaline and thank God that everything worked out.