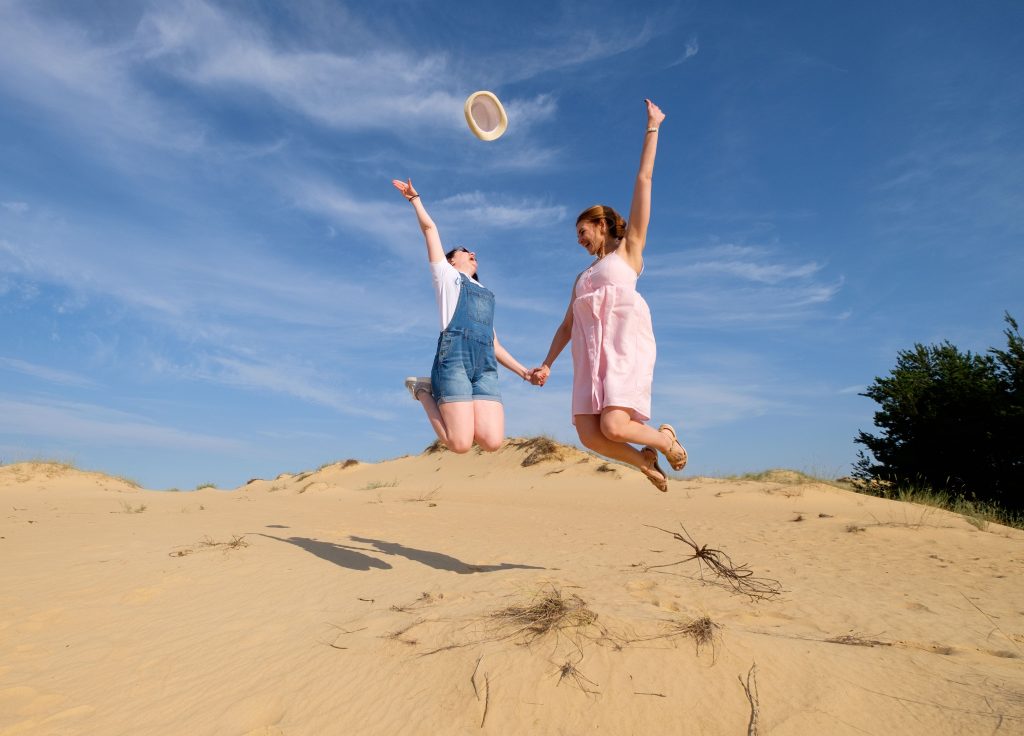 With European Union destinations still off-limits for Ukrainian tourists, the country’s own Black Sea and Azov Sea resorts are experiencing an early summer boom as Ukrainians seek out holiday options closer to home. This growth in domestic tourism comes just weeks after Ukraine first began relaxing coronavirus lockdown restrictions. While some fear it will lead to a new wave of infections, others hope it will provide a much-needed boost for the country’s struggling hospitality sector.

According to data from mobile communications operator Vodaphone Ukraine, resorts in the country’s southern Odesa, Mykolaiv and Kherson regions saw a 30 percent rise in visitors during the extended Constitution Day weekend in late June. Analysis of internet traffic and 4G usage identified even stronger growth in tourist numbers at resorts on Ukraine’s Azov Sea coastline in the southeast of the country, just a short distance from the front lines of the ongoing conflict with Russia. The small village of Bilosarayska Kosa, which lies around 20km from front line city Mariupol, posted the most dramatic growth with a 177 percent year-on-year increase in visitors.

Meanwhile, throughout June 2020, Ukraine’s largest Black Sea resort city Odesa lived up to its reputation as the country’s summertime capital, with tourist numbers returning to pre-coronavirus levels. Holidaymakers flocked to Odesa from across Ukraine during the first month of the summer season, with the largest contingent coming from Kyiv and the capital city’s satellite towns, followed by industrial hubs Zaporizhia and Dnipro. The surge in visitors caused considerable congestion in and around Odesa, with traffic gridlocked for extended periods on the Kyiv-Odesa highway.

The post-lockdown spike in Ukrainians visiting the country’s southern beach resorts creates new concerns over a possible surge in coronavirus cases. Many weekenders visiting Odesa’s packed beaches during Constitution Day festivities noted the lack of elementary pandemic precautions, leading to alarm that visitors would become infected and then spread the virus across the country upon their return home. Speaking on June 30, Ukrainian Health Minister Maksym Stepanov warned that mass violations of coronavirus quarantine regulations in Odesa and other resorts would inevitably lead to a new wave of infections.

Despite the possibility of coronavirus complications, the recent increase in visitors is proving welcome news for a domestic Ukrainian tourism industry that has been hard-hit by the previous months of lockdown closures. Odesa in particular is a traditionally popular springtime destination, but the city’s hotels, restaurants, cafes, and clubs remained largely shuttered throughout April and May 2020. The Odesa hospitality industry is now hoping to make up for lost time and expects to benefit from the limited travel options available to Ukrainian passport holders in the summer 2020 holiday season.

Ukrainian citizens gained visa-free access to the European Union’s Schengen Zone in June 2017 as part of Ukaine’s landmark Association Agreement with the EU, but visa-free travel has been suspended since the closure of international borders during the initial stages of the coronavirus crisis in spring 2020. Ukraine did not make it onto the EU’s initial safe list of countries unveiled at the end of June, meaning that tourist trips to the European Union in the coming few months remain unlikely.

A number of non-EU nations have reopened their borders to Ukrainian travelers in recent weeks, with the list including holiday destinations such as Turkey, Egypt, Montenegro and Albania. Charter flights to Turkey resumed in early July, with Turkish tourism officials hoping to welcome as many as 100,000 Ukrainian visitors during the month, which would represent around two-thirds of the 145,000 Ukrainians who spent their holidays in Turkey during July 2019. In total, more than 1.5 million Ukrainians vacationed in Turkey last year, making Ukraine the number seven source country for the Turkish tourism industry.

Despite the loosening of coronavirus travel restrictions to some countries, many Ukrainians are expected to shun the pandemic-related uncertainties of international holidays this summer in favor of domestic destinations. They will be able to choose from an increasingly wide range of options. Ukraine’s tourism sector has undergone significant modernization in recent years, with the beach resorts of the country’s southern coastline in particular benefiting from the arrival of new facilities and dramatically improved service standards.

The 2014 Russian military takeover of Ukraine’s Crimean peninsula has had a major impact on the development of the Ukrainian tourism industry. Prior to the Russian annexation, Crimea had served as the traditional focus of the Ukrainian tourism industry, with Ukrainians making up the vast majority of visitors each summer season. However, this annual flow has now been reduced to a trickle, leading to the development of resorts along the coastal regions of mainland Ukraine.

Efforts are also underway to promote Ukraine as a destination among international tourists. President Zelenskyy has called on the Ukrainian parliament to pass a new law on the development of the domestic tourism industry in the coming weeks. Since taking office just over a year ago, the Ukrainian President has often voiced his interest in the country’s tourism sector. In July 2019, he signed a decree on the development of the Chornobyl Exclusion Zone as a national tourist attraction. This attention to the tourism industry follows on from a number of initiatives launched by the previous government to promote Ukraine internationally as a new and original holiday destination.

The coronavirus crisis has disrupted the tentative tourism promotion efforts undertaken by the Ukrainian authorities in recent years, but as the country reopens to the outside world, work is underway to get things back on track. Early July saw the launch of the VISIT Ukraine portal, which aims to serve as a key resource for international visitors traveling to Ukraine. The portal features input from the State Border Guard Service, the Infrastructure Ministry, the Health Ministry, and the Interior Ministry, and contains a range of information including guidelines on entering the country and updates on coronavirus regulations.

While these efforts to attract international visitors are certainly welcome and arguably long overdue, the development of the Ukrainian tourist industry will still very much depend on the ability of market participants to generate growing domestic demand. Throughout the post-Soviet period, travel abroad has been seen as a highly prized status symbol among Ukrainians. This has created significant image problems for domestic holiday destinations, which have also suffered from associations with poor service standards and dilapidated infrastructure. However, the post-Soviet stereotype of moribund Ukrainian holiday resorts is now out of step with the upgraded reality of the country’s increasingly competitive tourism industry. With record numbers of Ukrainians set to discover this for themselves as they spend their 2020 vacations in Ukraine, the country’s hospitality sector could emerge as one of the few Ukrainian industries to benefit from the coronavirus crisis.

Peter Dickinson is the Editor of the Atlantic Council’s UkraineAlert Blog.