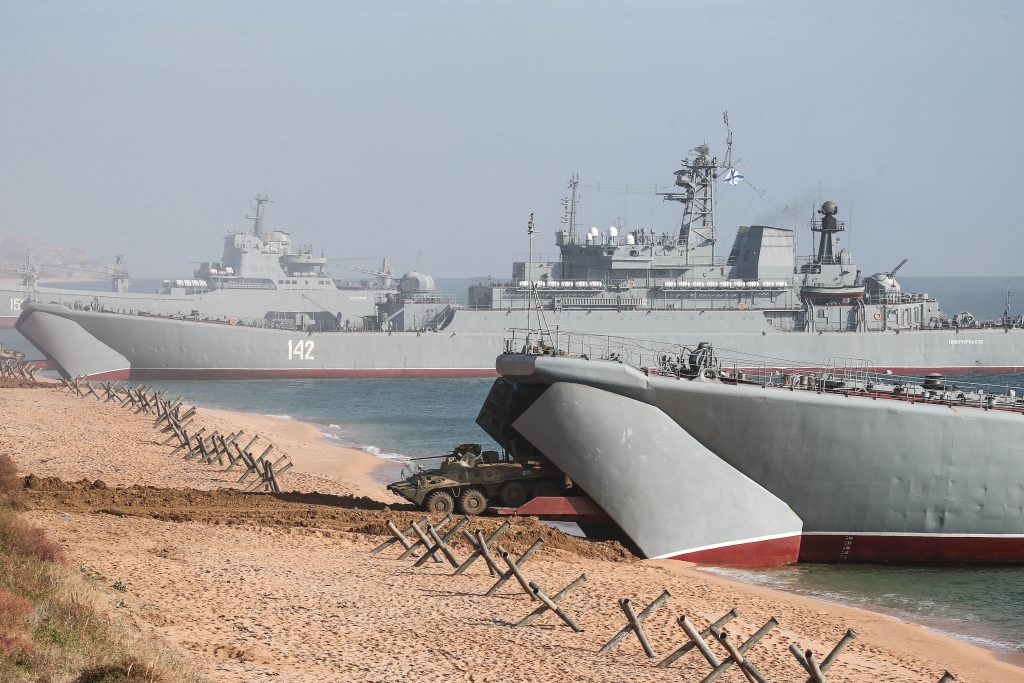 In recent months, international attention has been focused on a mounting border crisis manufactured by Kremlin-backed Belarusian dictator Alyaksandr Lukashenka on the European Union’s eastern frontier. As this border crisis now slowly deescalates, all eyes have turned to the nearby Ukrainian border with Russia, where Russian dictator Vladimir Putin has amassed a formidable potential invasion force.

European and North American policymakers need to recognize that these two dramas are inter-related elements of Putin’s broader hybrid war against the West. The Kremlin strongman aims to reverse the verdict of 1991 and undermine the rules-based international order while re-establishing Russia’s traditional zone of imperial influence in eastern Europe. If the democratic world is unable to hold the line in Ukraine and Poland, the future of both NATO and the EU will be thrown into serious doubt.

Putin’s top priority is reasserting Russia’s traditional dominance over Ukraine, which he regards as the key to realizing modern Russia’s imperial ambitions. Putin currently appears intent on isolating Ukraine from its Western partners and destabilize the country from within. His most likely end goal is a Kremlin-friendly government in Kyiv that will closely resemble the loyalist authoritarian regime in neighboring Belarus.

This objective was most recently spelled out by former Russian president and prime minister Dmitry Medvedev. In a provocatively-worded October 2021 op-ed published by Russian newspaper Kommersant, Medvedev argued that engaging with the current Ukrainian leadership was pointless and called on the Kremlin to wait for “sane” leaders to assume power in Kyiv. “It is only such leaders that are worth dealing with. Russia knows how to wait. We are patient people,” he stated. Given the overall menacing tone of his article, Medvedev’s comments were widely interpreted as a veiled threat and an indication that Moscow is committed to bringing pro-Kremlin proxies to power in Ukraine.

Medvedev’s anti-Ukrainian attack article followed on from Putin’s own remarkable 5,000-word essay on Russian-Ukrainian relations, which appeared three months earlier in July 2021. Entitled “On the Historical Unity of Russians and Ukrainians,” Putin’s lengthy treatise read like a declaration of war against Ukrainian independence. The article questioned the legitimacy of Ukraine’s internationally recognized borders and implied that Ukrainian statehood itself depends on Moscow’s consent. “I am confident that true sovereignty of Ukraine is possible only in partnership with Russia,” wrote the Russian leader.

Putin’s efforts to end Ukrainian independence and his recent support for provocations on the EU border reflect his rejection of the post-Cold War settlement and resentment over the West’s alleged disregard for Russia’s legitimate geopolitical interests. This anger has been smoldering since the Soviet collapse and the humiliations of the 1990s, which saw Russia reduced from great power status to grinding poverty and international insignificance practically overnight.

Putin’s hunger for geopolitical respect and his desire to avenge perceived historical injustices help to explain his apparent obsession with Ukraine. Fueled by chauvinist stereotypes inherited from the Soviet and Czarist eras, Putin continues to insist that modern Ukraine’s natural place is with Russia and rejects overwhelming evidence demonstrating the Ukrainian population’s preference for Euro-Atlantic integration. Rather than addressing the factors behind Ukraine’s civilizational choice, he blames the widening divide between Russia and Ukraine on Western meddling and dismisses the current Ukrainian authorities as US puppets.

The Russian leader’s judgement on Ukraine is so clouded by his own wishful thinking that he is unable to digest the painful lessons of 2014. During the spring and summer months of 2014, the Kremlin attempted to orchestrate a series of uprisings against the Ukrainian authorities in towns and cities throughout the predominantly Russian-speaking south and east of the country. The aim was to partition Ukraine and create a new state which was to be given the Czarist-era name “New Russia.” However, this campaign met with unexpectedly strong local opposition that derailed Moscow’s plans and left Russia with only a comparatively modest foothold in eastern Ukraine’s Donbas region.

Despite this setback, Putin has refused to acknowledge the reality of Russian-speaking Ukrainian patriotism and remains in denial over the transformation that has taken place in Ukrainian society over the past 30 years. Instead, he clings to the convenient but demonstrably false notion that a majority of Ukrainians see themselves as part of the so-called “Russian World” and are only prevented from reuniting with Mother Russia by a minority of extremists and their Western puppet masters.

The current Russian leadership attaches little weight to the agency of the Ukrainian people and prefers to view the struggle for Ukraine as part of their wider confrontation with the West. Crucially, they regard today’s Western world as weak and see this as a window of opportunity for Russia.

Many in Moscow believe the present geopolitical conditions are uniquely favorable. America is perceived as domestically divided and in a state of foreign policy disarray following the Afghanistan debacle. They also point to the Biden Administration’s prioritization of China and apparent desire to avoid further confrontation with Russia, as seen by President Biden’s accommodating approach to the Nord Stream 2 pipeline and readiness to meet Putin personally in summer 2021.

In Europe, Germany is undergoing a complex generational change in political leadership while France is preparing for elections and Britain remains preoccupied by the Brexit fiasco. Meanwhile, the entire continent is increasingly vulnerable to Russian energy blackmail as the Nord Stream 2 pipeline edges closer to certification.

The underwhelming international response in recent years to repeated Russian acts of aggression has also helped fuel perceptions of Western weakness. Despite Moscow’s ongoing military intervention in Ukraine and a long list of hostile acts against Western countries including cyber attacks, election interference, disinformation campaigns, and weaponized corruption, many in the democratic world continue to advocate renewed engagement with Russia.

With Russian forces now concentrated along the Ukrainian border and potentially poised to launch a major new offensive, Putin’s hybrid war against the Western world could be about to enter a dangerous new phase.

Western leaders must wake up to the magnitude of the challenge and recognize that they face an adversary who has been waging war against them since at least 2014. Indeed, some commentators would argue that Putin has been actively hostile towards the West for far longer, and regard his landmark speech to the 2007 Munich Security Conference as the starting point of today’s hybrid war.

As the recent migrant crisis on the Polish border indicated, Russia’s revisionist agenda is not limited to Ukraine. On the contrary, the Kremlin will continue to attack the institutional foundations of the democratic world and work to undermine NATO and the EU until the West finally brings its overwhelming economic, political and military superiority to bear.

At present, Moscow has little fear of such consequences and remains confident that the West has no appetite for confrontation. In this climate, attempts to appease Putin will only serve to further convince Russia of Western weakness and encourage additional acts of aggression.

It may require a dramatic new international security crisis to finally convince Western leaders of the need to contain the Kremlin. That crisis is most likely to take place in Ukraine. In order to avert disaster, it is therefore vital that the democratic world urgently sends an unambiguous message to Moscow spelling out the crushing costs it will impose if Russia chooses to escalate its war against Ukraine.

Taras Kuzio is an Associate Research Fellow at the Henry Jackson Society and Professor in the Department of Political Science at the National University of Kyiv Mohyla Academy.