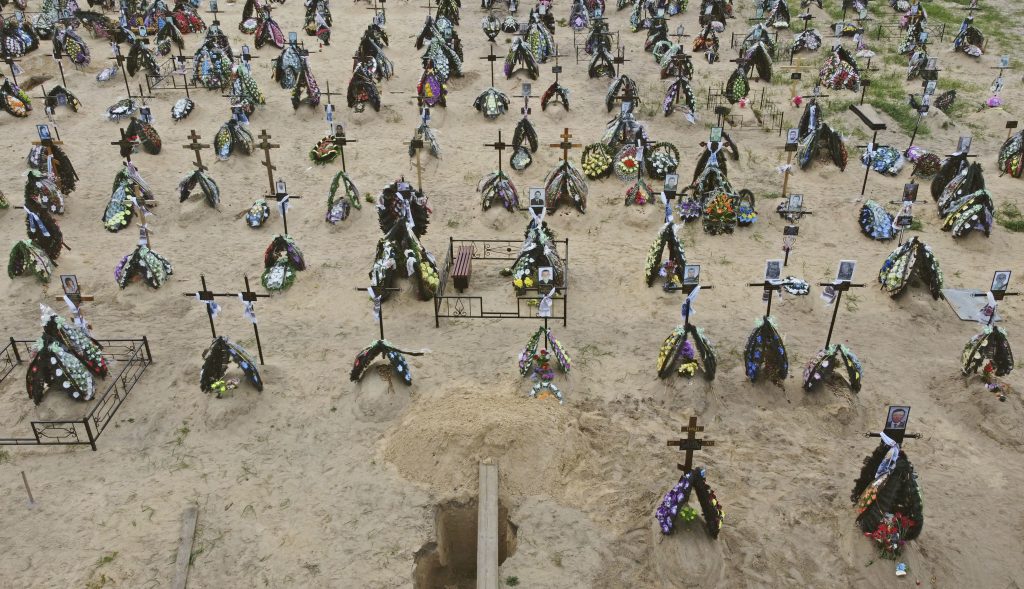 The sheer destructiveness of Vladimir Putin’s Ukraine invasion has stunned international audiences. Many have been particularly perplexed by the methodical annihilation of predominantly Russian-speaking Ukrainian towns and cities such as Mariupol which have been reduced to rubble despite deep historic, cultural and family ties to Russia.

Any lingering sense of shock is misplaced and reflects a failure to fully grasp the genocidal objectives driving the Russian invasion. In the four months since the conflict began, it has become abundantly clear that Moscow aims to extinguish Ukrainian statehood and eradicate all traces of Ukrainian identity while incorporating much of the country into Russia itself.

As the conflict has evolved and escalated, Russia’s chilling goals have been confirmed by numerous senior Kremlin officials. “The Ukraine that you and I had known, within the borders that used to be, no longer exists, and will never exist again,” commented Russian Foreign Ministry spokesperson Maria Zakharova on June 17.

Putin himself has justified land seizures in Ukraine by comparing the current war to the early eighteenth century imperial conquests of Peter the Great, who transformed Muscovy into the Russian Empire. Meanwhile, Russian Orthodox Church head Patriarch Kirill has positioned the invasion as a holy mission to reunite Russian lands.

The destruction of eastern Ukraine by the Russian military draws upon the fascist ideological premise of rejuvenation through a cleansing of the past. According to the ideologues of the new Russian Empire, this will lead to the rebirth of formerly Ukrainian regions that Putin has repeatedly described as “ancient Russian lands” and now calls “liberated territories.”

In Putin’s warped worldview, it is precisely the most predominantly Russian-speaking regions of eastern Ukraine that require what Yale professor Timothy Snyder has described as “cleansing violence” in order to free these regions from their contamination by “nationalist” ideas of Ukrainian statehood. Such thinking directly echoes the worst excesses of the totalitarian twentieth century and makes a mockery of Russia’s claims to be carrying out a “de-Nazification” operation in Ukraine.

Unsurprisingly, 89% of Ukrainians believe Russia’s military actions constitute genocide and nearly half of Ukrainians describe Putin’s regime as fascist or Nazi. America historian Snyder is one of a growing number of international experts to agree and has noted that a time traveler from the 1930s would have no difficulty identifying the Putin regime as fascist. “The symbol Z, the rallies, the propaganda, the war as a cleansing act of violence and the death pits around Ukrainian towns make it all very plain,” he wrote in May.

In parallel with the physical destruction of eastern Ukraine, Putin’s genocidal plan also involves the systematic depopulation and ethnic cleansing of occupied regions. As a country dominated by the former Soviet security services, modern Russia has vast experience in the practicalities of ethnic cleansing and population expulsions. Indeed, the Soviet era witnessed many of the largest forced deportations in world history from Crimea, western Ukraine and the three Baltic republics. These crimes against humanity are now being repeated throughout occupied eastern and southern Ukraine.

Since the start of the invasion on February 24, more than one million Ukrainians have been forcibly deported to the Russian-occupied Donbas region of eastern Ukraine or the Russian Federation itself. They have then been herded into so-called “filtration camps” and subjected to a wide range of human rights abuses including degrading strip searches and regular beatings. Those thought to harbor pro-Ukrainian views are subjected to particularly savage treatment and can expect to be singled out for further detention.

Ukrainians who come through the filtration process are typically sent to destinations throughout Russia, often finding themselves stranded thousands of kilometers from home and forced to live in dire conditions. Perhaps the most alarming aspect of this large-scale ethnic cleansing campaign is the fate of over 200,000 Ukrainian children who have been sent to Russia. Their removal from Ukraine is a textbook example of genocide as defined by the UN Genocide Convention.

Throughout the occupied regions of eastern and southern Ukraine, Russian forces are ruthlessly eradicating all signs of Ukrainian statehood. This “de-Ukrainianization” of Ukraine is the grim reality behind Putin’s lofty claims to be “de-Nazifying” the country. Ukrainian schoolteachers are being forced to adopt the Russian curriculum, with any use of the Ukrainian language subject to severe punishment. Ukrainian history books have been burned, monuments removed, and symbols of Ukrainian identity outlawed.

Needless to say, the Ukrainian media is now banned throughout the occupied regions. The importance of propaganda to Moscow has been underlined by the deployment of special trucks with giant TV screens amid the ruins of occupied Mariupol. Those residents who survived the brutal siege of the city are now bombarded with Kremlin messaging from these Orwellian propaganda vehicles as they queue for food and water.

Perhaps the most brutal aspect of this “de-Nazification” is the physical removal of anyone deemed pro-Ukrainian. Prior to the invasion, US intelligence warned that the Kremlin had created “Kill Lists” of Ukrainian journalists, elected officials, intellectuals, and civil society activists who were to be killed. These fears have proven well-founded, with thousands of Ukrainians subjected to abduction and illegal detention since February 2022.

Something as innocuous as a social media post disparaging the Russian military or supporting Ukrainian troops can be enough to ensure a person’s disappearance. The fate of most victims remains unknown, but evidence from liberated areas such as Bucha to the north of Kyiv and accounts from those who have returned from captivity indicate that torture and executions are common. The United Nations Office of Human Rights has stated that Russian troops have executed civilians in over 30 Ukrainian settlements and has identified executions in Kyiv, Chernihiv, Kharkiv, and Sumy regions.

How has Putin persuaded so many Russians to participate in this genocide? The transformation of the Russian military into willing executioners of Ukrainians follows the same template used by both the Nazis and the Stalin regime. Prior to the mass killings of Poles, Ukrainians and other “enemies” of Soviet power in the 1930s, victims were first dehumanized by the state propaganda machine. The Kremlin media has repeated this process since the mid-2000s. In the words of the EU Center to Combat Disinformation, the Russian media has long called “for the eradication of Ukrainians in a manner that can only be described as genocidal.”

The Kremlin-controlled Russian media has frequently questioned Ukraine’s right to exist while demonizing Ukrainians as Nazis, fascists, and disloyal stooges of the hostile West. Ukrainian statehood is often portrayed as an entirely artificial construct propped up by foreign masters for the sole purpose of weakening Russia. Meanwhile, the Ukrainian language and Ukrainian culture are mocked and humiliated in terms reminiscent of late nineteenth century colonialism. This poisonous propaganda cocktail set the stage for the genocide that is now unfolding in plain view.

What would a future “de-Ukrainianized” Ukraine look like? If Putin’s genocide is allowed to continue, regions under Russian control will become heavily depopulated. Only those regarded as sufficiently Russified and loyal to Moscow will be allowed to remain, with others subjected to execution, imprisonment, deportation or exile. Russian citizens will be brought in from across the Russian Federation to repopulate occupied areas and transform the demographic balance in Moscow’s favor.

This process will mirror similar Soviet policies which saw millions of ethnic Russians and other nationalities from across the USSR brought to Ukraine to dilute the country’s sense of national identity. Dramatic population shifts of this nature have already taken place in Crimea since the Ukrainian peninsula was occupied by Russia in 2014. The Kremlin is reportedly now beginning to move Russian citizens into occupied areas of mainland Ukraine such as Kherson and Zaporizhia regions.

Western policymakers should be in no doubt that the many different Russian war crimes currently taking place in Ukraine are all part of a coherent plan to commit genocide. Putin has made his genocidal intentions toward the country clear on numerous occasions. He is now slowly but surely realizing his criminal vision of a Ukraine without Ukrainians. If he is not stopped, future generations will struggle to comprehend why the democratic world stood by and let it happen.

Taras Kuzio is a professor of political science at the National University of Kyiv Mohyla Academy and author of the recently published “Russian Nationalism and the Russian-Ukrainian War.”

Image: Mass grave where victims of Russia's invasion of Ukraine are buried,in Irpin near Kyiv. (Kyodo via Reuters Connect)