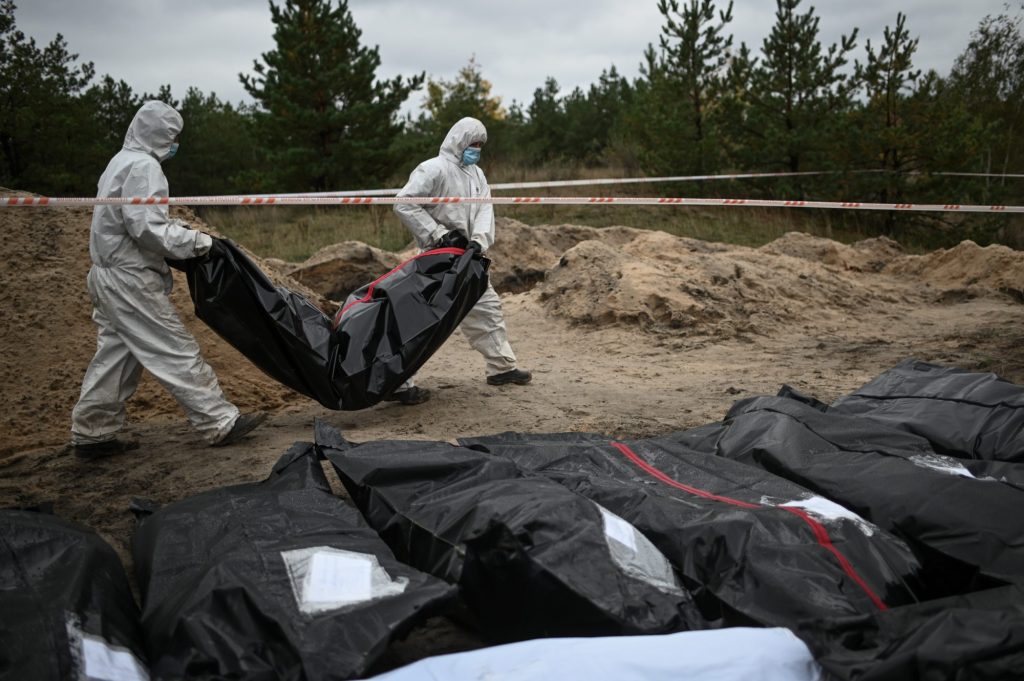 The liberation of Kherson in early November sparked a wave of euphoria as Ukrainians celebrated a landmark victory over Vladimir Putin’s invading army. Weeks later, this celebratory mood has now given way to all-too-familiar feelings of grief and fury as the Ukrainian authorities uncover evidence of war crimes committed during the city’s eight-month Russian occupation.

This grim process has already been repeated in hundreds of liberated villages, towns, and cities throughout northern and eastern Ukraine. On each occasion, retreating Russian troops have left behind a vast crime scene of mass graves, torture chambers, sexual violence, and deeply traumatized communities. Specific accounts of civilian suffering are strikingly similar from region to region, indicating that these crimes are the result of deliberate Kremlin policy rather than the rogue actions of individual Russian army units.

Wherever Russia establishes control, anyone regarded as posing a potential threat to the occupation authorities is at risk of abduction. This includes elected local officials, military veterans, civil society activists, journalists, and anyone suspected of overtly pro-Ukrainian sympathies. Many victims are subjected to torture and execution. Others simply disappear. Those who avoid abduction face the threat of forced deportation to the Russian Federation. Millions of Ukrainian civilians, including thousands of children, are believed to have been deported in this manner over the past nine months.

The atrocities committed by Russian troops in occupied regions of Ukraine are only one part of a wider genocidal agenda that defines the invasion unleashed by Vladimir Putin on February 24. In areas of Ukraine occupied by the Kremlin, all symbols of Ukrainian statehood have been methodically removed and a new Russian imperial identity imposed on the civilian population. Teachers have been brought in from Russia to indoctrinate Ukrainian schoolchildren, while access to the Ukrainian media has been blocked and the Ukrainian language suppressed.

Putin’s intention to extinguish Ukrainian statehood and eradicate Ukrainian national identity was evident long before Russian tanks crossed the border in early 2022. His menacing statements have since been matched by the criminal actions of his army. Apologists had earlier been able to dismiss the Russian dictator’s genocidal rhetoric as mere political hyperbole, but that is no longer possible.

For years prior to the current invasion, Putin publicly denied Ukraine’s right to exist and insisted Ukrainians were actually Russians (“one people”) who had been artificially and unjustly separated from the motherland. In summer 2021, he took the highly unusual and revealing step of publishing a 5000-word treatise arguing the illegitimacy of Ukrainian statehood.

On the eve of the invasion, Putin lambasted today’s independent Ukrainian state as an intolerable “anti-Russia” and declared that Ukraine was an “inalienable part of Russia’s own history, culture, and spiritual space.” More recently, he has directly compared his invasion to the eighteenth century imperial conquests of Russian Czar Peter the Great and boasted that he is “returning historically Russian lands.” In late September, he illegally annexed four partially occupied Ukrainian provinces while proclaiming that they had joined the Russian Federation “forever.”

Other senior Kremlin officials and regime propagandists have been even more explicit in terms of the genocidal language they have employed to champion the invasion. Former Russian President Dmitry Medvedev recently described Ukrainians as “cockroaches” while dismissing the Ukrainian nation as “mythical.” Meanwhile, on Russia’s carefully curated state TV political talk shows, calls for genocide against Ukrainians have become completely normalized. Pundits dehumanize and demonize Ukrainians while routinely questioning the existence of a separate Ukrainian nation and casually discussing the necessity of destroying the Ukrainian state.

The staggering quantity of genocidal statements coming out of Russia since the invasion of Ukraine began nine months ago makes it relatively easy to demonstrate the intent that is so crucial when identifying acts of genocide. The United Nations defines genocide as meaning any one of five acts “committed with intent to destroy, in whole or in part, a national, ethnical, racial, or religious group.” The mass killings, systematic human rights abuses, forced deportations, and deliberate destruction of civilian infrastructure carried out by the Russian military mean that Moscow is arguably guilty of committing all five genocidal acts in Ukraine.

Despite widespread awareness of the war crimes taking place in Ukraine, many in the international community remain reluctant to speak explicitly about the genocidal objectives of Russia’s invasion. Instead, debate continues over the dangers of humiliating Putin and the need for a negotiated settlement. Numerous senior officials and prominent commentators insist on addressing the invasion as if it were a particularly unruly border dispute rather than an exercise in national extermination. In reality, any talk of compromising with the Kremlin is both absurd and obscene. Advocates of appeasement must recognize that there can be no middle ground between Russian genocide and Ukrainian national survival.

In the aftermath of World War II, post-war audiences looked back on the horrors of the Nazi regime and asked how crimes of such magnitude were allowed to happen. Many of those who lived through the war protested that they had been completely unaware of the atrocities taking place around them. Similar excuses will not work in the current situation. On the contrary, the overwhelming evidence of Russian war crimes and the openly genocidal intent on display in Moscow mean that when future generations look back at Putin’s Ukrainian Genocide, nobody can claim they did not know.

Image: Ukrainian forensic officials carry human remains away from a mass grave in Lyman on October 12, 2022. (Photo by Stringer/Sipa USA)