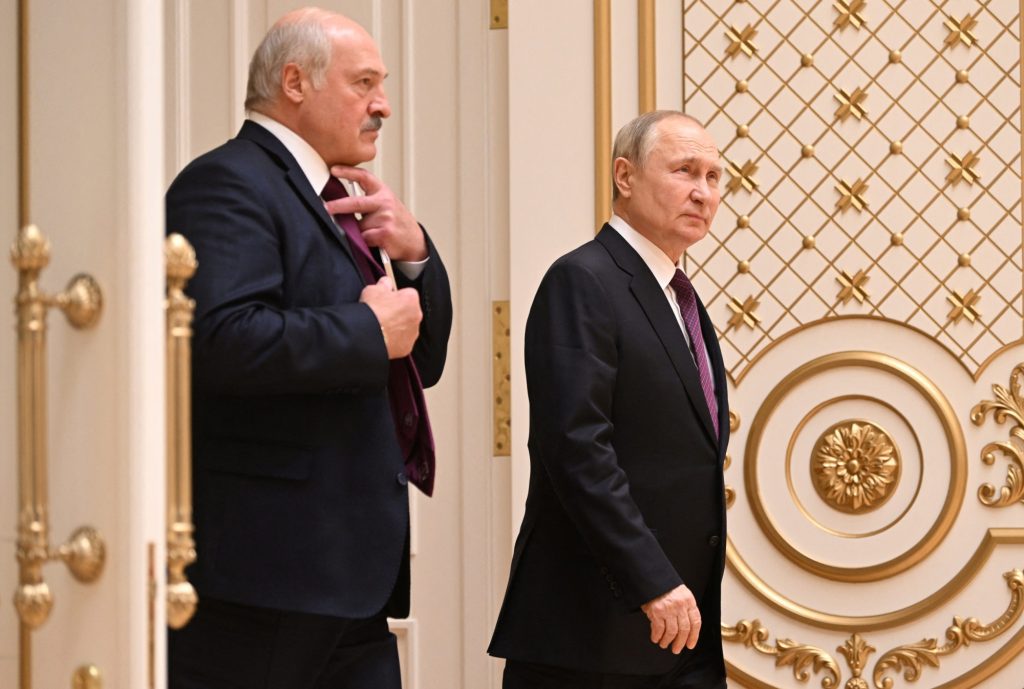 Vladimir Putin visited Minsk for the first time in three-and-a-half years on December 19. This rare international trip sparked speculation that the Russian dictator may be seeking to personally pressure his Belarusian counterpart into joining Moscow’s faltering invasion of Ukraine.

Monday’s meeting between Lukashenka and Putin came following weeks of reports indicating a growing Russian troop presence in Belarus, and as the Belarusian military was completing national battle readiness exercises. Ukraine is certainly taking the issue seriously, with Kyiv strengthening its defenses along the Belarusian border on the eve of Putin’s Minsk trip.

Ukrainian officials are increasingly voicing concerns that Moscow may be preparing to repeat the February 2022 offensive against Kyiv, which saw Russian troops use Belarus as a launchpad for an assault on the Ukrainian capital. In a recent interview with Britain’s The Economist magazine, Valery Zaluzhny, the head of Ukraine’s armed forces, said he had no doubt Russia “will have another go at Kyiv” in the first few months of 2023.

Following their three-hour meeting, Putin and Lukashenka did not make any major announcements. Instead, they spoke of ongoing negotiations over a series of bilateral trade, economic, and defense issues. Putin noted that both countries would proceed toward deeper security integration and said they would continue intensifying joint military exercises. Meanwhile, Lukashenka confirmed that Belarus has received Russian missile and air defense systems.

Both strongmen played down earlier suggestions that Russia was poised to annex Belarus or was planning to force the country to join the invasion of Ukraine, with Putin instead speaking of the strategic partnership between the two authoritarian regimes. These denials were echoed by Kremlin spokesperson Dmitry Peskov, who appeared to rule out the possibility of full-scale Belarusian involvement in Russia’s ongoing invasion.

There remains no real clarity over what was discussed behind closed doors in Minsk. Many observers believe talks regarding a possible join offensive against Ukraine must have been the focus of negotiations and note that Putin’s presence would hardly have been required for the official agenda of relatively routine discussions on non-essential matters. However, others have suggested that the Minsk meeting may have been nothing more than an opportunity for both parties to demonstrate their loyalty to each other at a time when each ruler is confronted by deepening international isolation.

If military matters were indeed discussed, this does not necessarily indicate plans for Belarus to directly participate in a new Kyiv offensive. Other options could include an expansion of the current Belarusian role as a base of operations for the Russian military or the provision of armor and ammunition from the Belarusian arsenal. Alternatively, the entire episode may be part of an elaborate ruse to pin down Ukrainian forces and prevent their redeployment to current invasion hot spots in southern and eastern Ukraine.

Lukashenka is already widely seen as a party to the conflict after allowing Putin to use Belarus as a gateway for the initial invasion of Ukraine in February 2022. For the past ten months, he has permitted Russia to base troops in Belarus and launch airstrikes from the country against Ukrainian targets. Following the announcement in September of Russia’s first mobilization since World War II, Belarus also began to serve as a training base for mobilized troops.

Despite this obvious involvement, the Belarusian leader bristles at claims that he is a junior partner in Putin’s invasion. Ever since the outbreak of hostilities, he has denied that Belarus is actively participating in the conflict and has instead sought to position himself as a potential mediator. At the same time, in an apparent nod to his Kremlin patrons, Lukashenka has made a number of public declarations acknowledging the need to support neighboring Russia.

This awkard balancing act is understandable. There is little public enthusiasm in Belarus for the invasion of Ukraine, leading to doubts over the reliability of the Belarusian army if Lukashenka does give the order to cross the Ukrainian border. However, the Belarus dictator is almost entirely dependent on Moscow for his political survival and risks becoming expendible if he refuses direct Russian demands to join the war.

For the time being, Putin and Lukashenka’s intentions remain shrouded in mystery. Few are prepared to take their denials at face value, but it is still too early to identify any specific preparations for a major new offensive. Ukrainian military planners certainly cannot afford to dismiss this threat. They will be spending the Christmas holiday period watching the situation closely while preparing for a potential escalation on the northern front.

For Putin, forcing Belarus to join the war would be a desperate gamble that could easily backfire. He has already suffered catastrophic losses in Ukraine and can ill afford another humiliating military defeat. However, with his invasion plans rapidly unraveling and his options narrowing, Putin may decide that it is worth the risk.