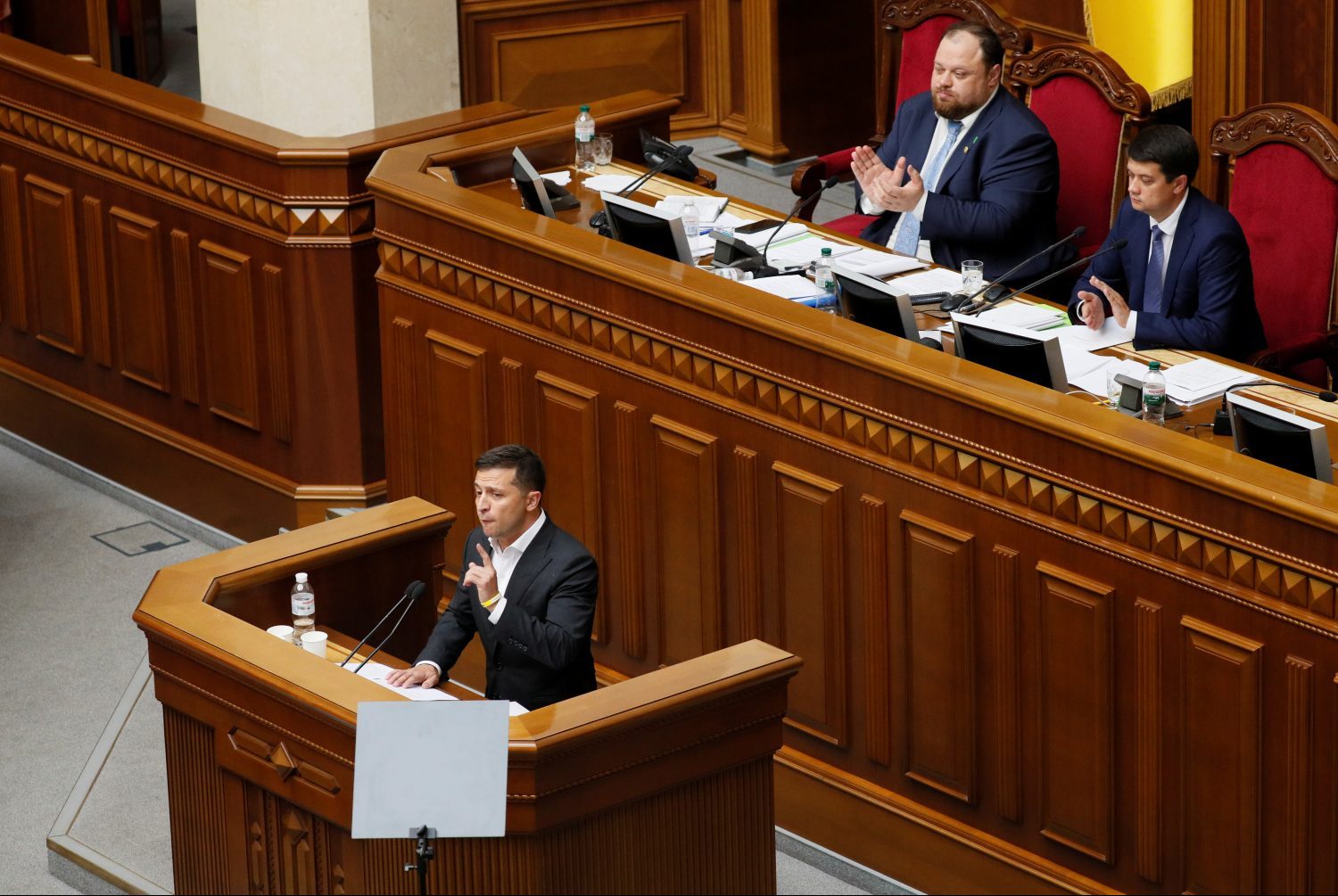 On May 15, top Ukraine experts assessed Ukrainian President Volodymyr Zelenskyy’s domestic policies during his first year in office at an Atlantic Council event. Dr. Tymofiy Mylovanov, president of the Kyiv School of Economics, associate professor of the University of Pittsburgh, and former Minister of Economic Development, Trade, and Agriculture of Ukraine, was joined by Atlantic Council Senior Fellows Adrian Karatnycky and Dr. Anders Åslund took questions from the audience, but due to time constraints, they were unable to address them all. Below are responses to a selection of these questions.

It seems like Ukraine likes to drag its feet on reform. The banking bill seems to be an example of Ukraine reforming only because external factors forced its hand and not because it was the virtuous thing to do. Will this attitude ever change, especially after the government changes?

Dr. Tymofiy Mylovanov, President, Kyiv School of Economics; Associate Professor, University of Pittsburgh; Former Minister of Economic Development, Trade and Agriculture of Ukraine: I do not expect this attitude to change. The government often lacks context and believes that they can get by without undertaking serious structural reforms. But I also do not think this law will be effective in addressing the issues it was meant too. It is likely to be struck down in the higher courts in Ukraine.

What impact does the banking bill have on keeping insiders from benefitting from, or gaining ownership of, nationalized and bailed out banks?

Dr. Anders Åslund, Senior Fellow, Eurasia Center, Atlantic Council: The new bank bill will block the return of 104 banks that have gone under due to their former owners, many of whom have looted the banks. The best way to rob a bank is to own a bank, because an “owner” only holds an equity capital of several percent of the bank assets, while a typical former Ukrainian bank owner borrowed more than 80 percent of the assets from “his” bank.

Land reform is important, and corruption is still an issue that needs to be investigated before land reform can be successful. If neither the SBU nor the prosecutor general will investigate land use corruption, is the answer western pressure?

Mylovanov: I do not believe that western pressure is the answer. In fact, I think this pressure does not work. The answer is the sovereign democratic process, where the demand for anti-corruption efforts comes from the public. It will take time, perhaps a very long time, but this is the only way to go. You cannot push an anti-corruption effort from outside the country. What one can do, however, is build capacity and provide infrastructure for the public to be better informed.

Why was the initial limit on land purchases set to 100,000 hectares? Why was there little effort to prioritize small- and medium-sized enterprise-focused land reform?

Mylovanov: This question is based on false premises. First, the initial limit was higher; 200,000 at the national level. It is not a large amount since it equals only 0.5 percent of total arable land. The support for small- and medium-sized farmers has always been a priority for the government. The proper approach is to provide these farmers with access to cheap credits. This is addressed in a number of laws creating a partial credit guarantee fund, which also sets up a framework for eligible farmers to register, as well as in government resolutions that regulate interest rate compensation for farmers. A flat-out restriction on the demand side (the current law only individuals are allowed to buy land and up to 100 hectares) suppresses the prices in the markets and benefits those who are currently renting (and de facto own) large plots of land, some much more than 200,000 hectares.

The promises of land reform came up empty. What would it take, aside from public pressure, to enact real land reform and boost the economy?

Mylovanov: It requires much better coherence among the political leadership and the Servant of People party. The issues are there and structural reforms are difficult. One should expect resistance from those currently benefiting from rents from the land. The party should have powered through that resistance in October, when the members of parliament were much more aligned and disciplined.

Did Mylovanov have a sound economic development strategy? Looking back, what could he have done differently now in terms of economic strategy and program?

Mylovanov: Exports did not contract, neither did tax revenues. Industrial output did decrease but less than in the neighboring countries in Europe. The government is successful because it maintained macroeconomic stability, delivered economic growth, increased salaries, and brought in higher investments.

Åslund: The growth contraction in Q4 2019 and Q1 2020 was mainly caused by two factors: Low international steel prices, which is a completely exogenous factor, and the excessive appreciation of the hryvnia of 17 percent to the US dollar in 2019, which was caused by the National Bank not cutting interest rates fast enough when inflation had been defeated.

Was it a good idea to strengthen the hryvnia by more than 15 percent? Did it contribute to industrial output contracting?

Åslund: The strengthening of the hryvnia was never a policy but an accident. The National Bank insisted on defeating inflation, and rightly so. For years, it had been surprisingly stubbornly high, but in late 2019 it really fell, and then NBU did not cut its interest rates as fast as it should have, we can now say in hindsight.

Zelenskyy at home: One year of domestic reform?

Since his election last year, President Zelenskyy and his government have pledged to transform and energize Ukraine’s economy. Those pledges have not been realized. Why, and what should the government do this year to live up to those promises?

What were the major benefits you envisioned and experienced from strengthening the hryvnia by 15 percent?

Mylovanov: I believe the hryvnia should have been weakened, but this is not the government’s mandate.

What could the Honcharuk government have done to support economic growth? Why didn’t it happen? Wasn’t there something to break away from Groisman’s tepid and unimaginative economic policy?

Åslund: The overall problem with the Honcharuk cabinet of ministers was that it was not coordinated. However, that was imposed on it by the president and the presidential office that called on individual ministers rather than delegating issues to the cabinet of ministers. Clearly, neither the president nor the presidential office have understood this yet. The previous three governments had acted as collectives, but the two Zelenskyy governments are operating as individual ministers, because that is what they are ordered to do. The main cause of the lower growth rate in Q4 2019 and Q1 2020 was the high exchange rate, which was caused by too slow cuts in the interest rates by the NBU. Yet, the Ukrainian government should have been reformed. Its digitization has not happened.

How do you see state-owned enterprise reform progressing? There have been many initiatives to professionalize boards, professionalize management, establish compensation structures, complete privatizations of five large-scale enterprises and the establishment of a national wealth fund among many other needs. Is the momentum for rationalizing the SOE structure in Ukraine continuing?

Åslund: No, the main problem here is the populist policies of President Zelenskyy. He insists on cutting salaries of all state officials and state enterprise managers to a maximum of ten times the Ukrainian minimum wage (currently $1,740 a month), which is several times the relevant market salaries. He must understand that this is a pro-corruption policy, but he persists with it, apparently because it is popular according to opinion polls, which seem to govern Zelenskyy’s policy choices.

Ukraine’s President Zelenskyy won election one year ago by promising to end decades of government corruption, but a spring 2020 purge of leading Ukrainian reformers raises grave doubts over the country’s future direction.

Walking a tight rope, one year of Zelenskyy’s foreign policy

One year ago, Zelenskyy promised to make Ukraine rich, slay corruption, and bring peace to eastern Ukraine. Skeptics will say that his moves amounted to nothing, but others are impressed that he’s putting in the work.