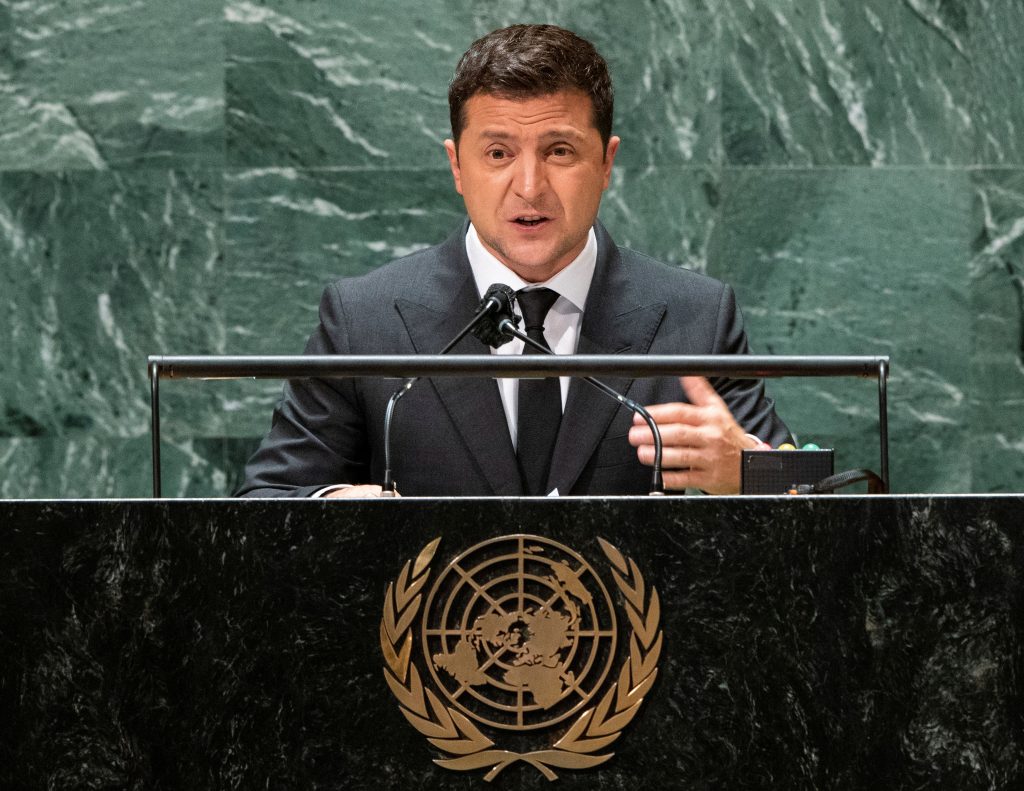 Ukrainian President Volodymyr Zelenskyy used his September 22 address at the United Nations General Assembly to criticize the international community’s ineffective response to Russian aggression in Ukraine and support calls for the reform of the UN itself, which he branded a “retired superhero.”

The Ukrainian leader painted a grim picture of the damage done to international security by the failure to stand up for international law and hold Vladimir Putin accountable for his attack on Ukraine. “No one in the world feels safe anymore. I emphasize: no one feels safe. And no one can hide behind international law as if behind a stone wall,” commented Zelenskyy.

He argued that continued international inaction over Russian aggression in Ukraine would fuel the rise of instability and authoritarianism around the world. “This can lead to the collapse of the entire architecture of international relations. We will no longer have any rules other than might is right. It will be world where, instead of collective efforts, selfishness will dominate; a world with more and more dictatorships, less equality, less democracy and freedom.”

The UN’s decision not to join the inaugural Crimea Platform summit, which took place in Kyiv on August 23, was targeted for specific criticism. The Crimea Platform initiative seeks to put the ongoing Russian occupation of Ukraine’s Crimean peninsula back on the international radar. A total of 46 countries and international organizations participated in the initial summit last month, but the United Nations was not among them.

Zelenskyy accused the UN of “ignoring a platform designed to solve the problems of international law and occupation,” and implied that this was due to misguided concerns over offending permanent UN Security Council member Russia. “ If we want to revive the UN, let us remember that there are no chosen ones here who cannot be offended. The UN is all of us, all 193 countries.”

Continuing his attack on the alleged international appeasement of Russia, the Ukrainian President pointedly expressed gratitude to fellow UN members who risked Moscow’s displeasure in order to raise the issue Putin’s Ukraine war during the current United Nations General Assembly. “I thank all the states that mentioned Ukraine in their speeches here this year. It is very important. And many others who are not ashamed that Ukraine is their friend and partner. Who can call things by their names, call occupation occupation, and call aggression aggression, without fear that someone will leave this hall for everyone to see.”

Questioning the effectiveness of the UN in its current format, Zelenskyy pointed to the organization’s apparent inability to counter Russian policies of passport imperialism in occupied eastern Ukraine, which has seen the Kremlin reportedly issue more than 600,000 Russian passports to Ukrainian citizens since spring 2019. “Isn’t this evidence of an international crime? Isn’t it proof of impunity and disrespect for international law? Moreover, the Russian Federation itself officially declares it. And it forces our citizens of Ukraine to take part in elections to the Russian parliament. If the UN does not react efficiently and strongly to this, isn’t it proof that it is too late to revive the UN?”

The former showman concluded his address in characteristically colorful style, comparing today’s UN to a “retired superhero” who has long since forgotten what he was once capable of. “He considers himself a burden, a weak, frail, useless old man, whose life was in vain. Or maybe the UN will remember something?”

Zelenskyy’s strongly worded UN speech reflects the noticeably more combative stance adopted by the Ukrainian leader on foreign policy issues since early 2021. This has seen him becoming increasingly vocal over what he sees as insufficient international support for Ukraine as it battles against an eighth year of Russian aggression. He has also expressed his frustration at the failure of some partners to fully grasp the high geopolitical stakes of the confrontation between Moscow and Kyiv.

In recent months, Zelenskyy has called on the US and EU to provide Ukraine with a clearer road map for the country’s further Euro-Atlantic integration. Speaking to the Western media in summer 2021, he said he wanted US President Joe Biden to provide a clear “yes or no” answer regarding a NATO membership action plan for Ukraine. Senior members of Zelenskyy’s administration such as Foreign Minister Dmytro Kuleba have echoed the Ukrainian leader’s move to more direct language.

This demanding tone has failed to produce any major breakthroughs, leading to accusations that Zelenskyy risks undermining the goodwill of the democratic world to no purpose. However, his vocal criticism of perceived Western inaction and policies of appeasement is very much in step with Ukrainian public opinion.

Many Ukrainians have long felt that the international community does not treat Russian aggression against Ukraine sufficiently seriously, and are happy to see Zelenskyy voice their concerns on the global stage. This should bolster domestic support for the Ukrainian President, but it remains to be seen whether it will help his country’s cause internationally.